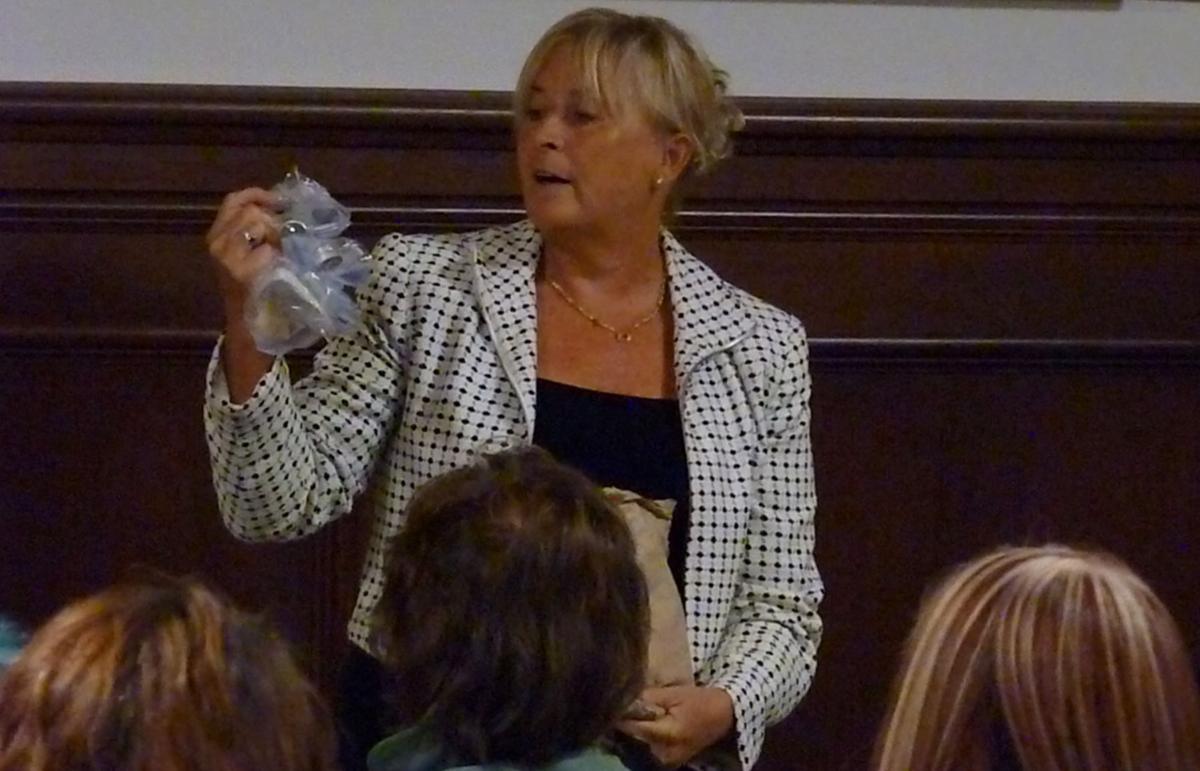 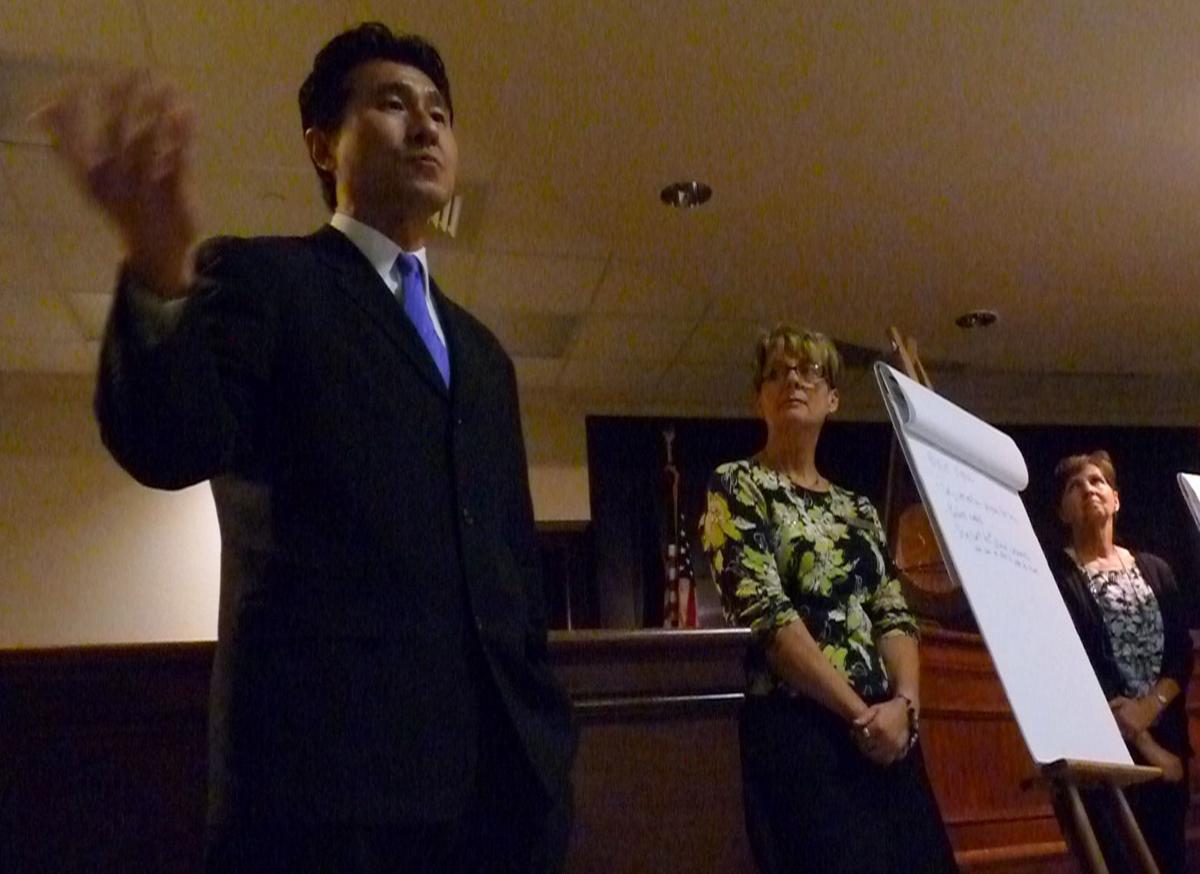 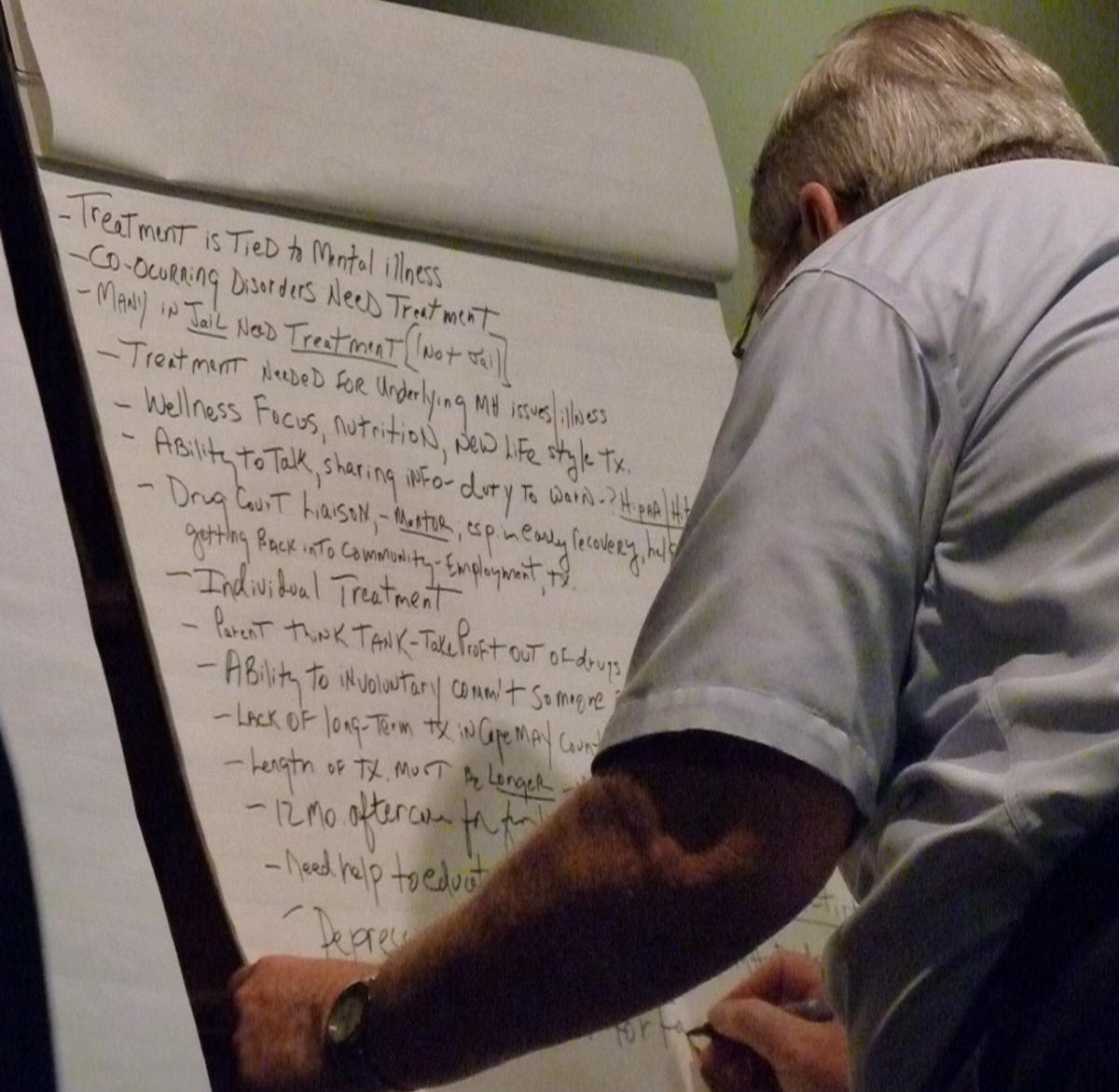 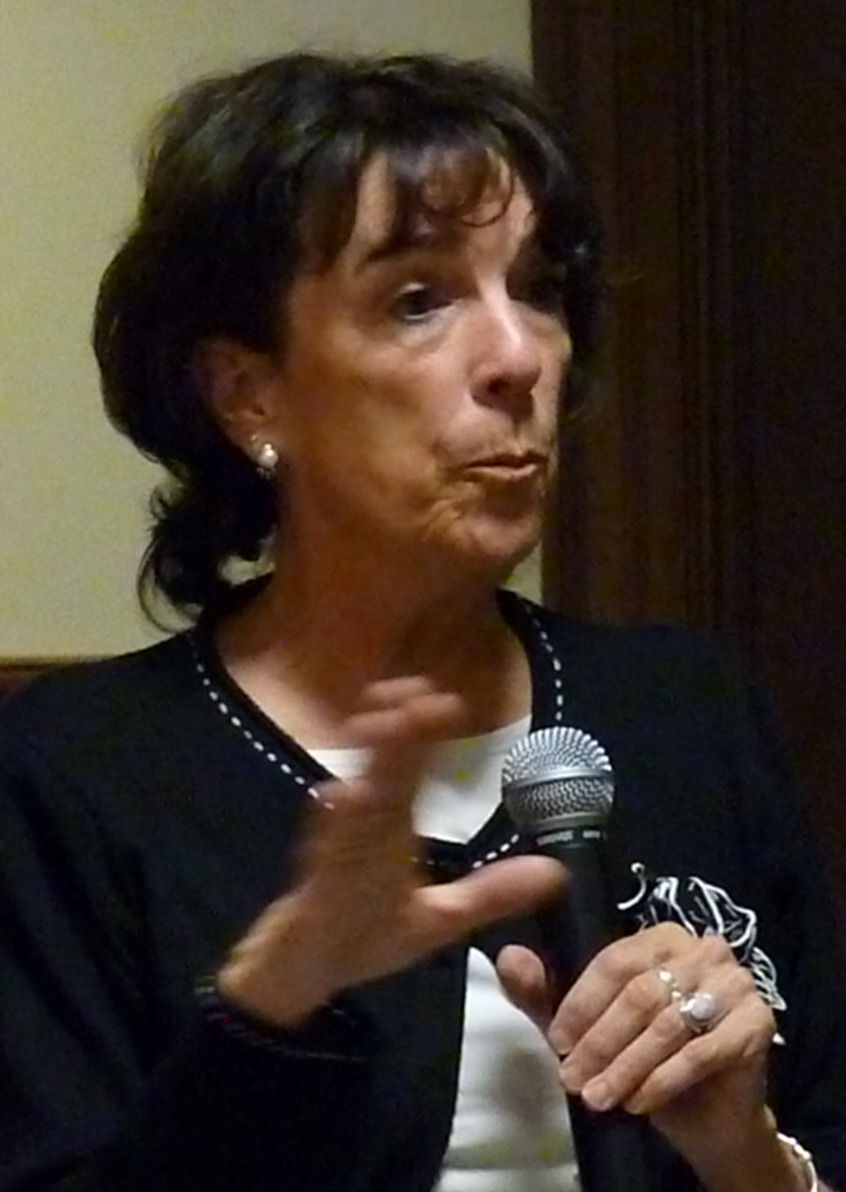 CREST HAVEN – Ninety people, four easels, one goal: to speak about drug addiction in Cape May County and problems faced by those touched by it. That was the focus of the Oct. 10 “Giving a Voice to Addiction” seminar hosted by Freeholder Kristine Gabor at the county Administration Building.

Once again, there was a concerted call for an in-county rehabilitation facility for drug addicts.

There was also a common thread that ran among all those who spoke: Drug addicts are sons and daughters, brothers and sisters, grandchildren and dear friends. They are not nameless creatures from afar. Some experimented with drugs and got hooked. Others were injured, were given legal pain prescriptions, which led to reliance on illegal drugs. Many want help and find stumbling blocks are every turn in their road to recovery.

Some have the fortitude to go “cold turkey,” but that is admittedly painful, and something not everyone can or wants to experience. Still others are taken to out-of-state rehabilitation centers with marginal rates of success.

Drug Court is the link to sobriety for some who spoke. Assistant Prosecutor Edward Shim, a Wildwood Catholic High School graduate, who works in the local Drug Court, explained its operation and how Superior Court Judge John Porto, a Wildwood High School graduate, oversees that court. Thus, Shim noted, it is a program that is overseen by people who are familiar with Cape May County and its residents, giving them an understanding of some problems faced by those who appear before the court.

Some speakers cited health privacy laws as restricting a family from learning the medical conditions of loved ones, some of whom they know have addiction problems. If a person is over 18, medical professionals are forbidden from telling anyone about their condition unless permission is granted by the person.

Not a standing-room-only crowd as was the first one in September, but given the stormy conditions and flooding on barrier islands that prevented some from attending, Gabor was satisfied with the evening.

As individuals, identified only by first name, told their stories, problems they encountered were listed on those easels as Recovery, Treatment, Barriers or Other. Posting those concerns were Greg Speed, chief executive officer of Cape Counseling, Kim Mounts of Cape Assist, and Sharon Modzelewski of the county Human Services Department.

Rosalee, an 80-year-old grandmother, told of her grandson who had been in state prison. The 30-year-old admits he needs rehabilitation with a drug problem, and is still awaiting his first counseling session from last October. “He was crying for help,” she said. He was in the back room of the house. Not knowing what to do, she called the local police department.

Unbeknown to her, they handcuffed her grandson and took him out the back door without telling her of their action.

“I am an 80-year-old grandmother trying her best to help her family,” said Rosalee.

Mickey, an addict who was “grateful for my recovery,” said he was concerned about the increase in drug abuse. Part of a men’s rehabilitation group, he said his group “is focused on youth more than our own treatment needs.” He cited a mentoring program of teens to teens and also from college freshmen mentoring seniors in high school.

He believed that is needed is more awareness for those taking pain medication to “avoid double dipping” that could lead to use of illegal drugs. He also felt that monthly community meetings “meet and greets” he called them, would go a long way to dispel stereotypes of types of addicts.

Lack of a regional rehabilitation facility was cited as his “biggest barrier” to kicking the addiction. He also said 12-Step programs for Alcoholic Anonymous and Narcotics Anonymous as school-based programs may benefit young users. He also advocated “decriminalize drugs” for persons with non-violent crimes.

“Don’t throw them in jail, treat their addiction. You would not put a diabetic in a cell and not give them insulin,” Mickey stated.

“Teach parents to talk about drugs. My parents would rather not talk about it. I am here today, and that could be the reason,” he added.

“We put people in jail every day, but we can’t put them in rehabilitation. He said every night he is “moved, touched and inspired by their stories. If we bring them to life we will move forward with recovery,” he concluded. His oratory was met with a round of applause.

Sueanne Agger with Learning Recovery Center of Wildwood, a not-for-profit agency, which she described as a “self-help center” spoke of the Syringe Access Program, commonly known as the needle-exchange program. The center provides transportation to Atlantic City where addicts exchange used hypodermic needles for clean ones.

The idea behind the program, she said, is to prevent diseases such as HIV and Hepatitis C spreading by use of used needles.

Agger told how, at first, she was incensed thinking the program was a waste of taxes, but then came to realize “Is this the best we can do for people battling this disease?” She urged the community to press for a detox center at Cape Regional Medical Center, get it to designate some beds, and also establish a long-term residential facility, a half-way house, and “Vivitrol to all.”

She cited the work done for and with addicts by Pastor Doug Shenton at First Baptist Church of Wildwood, which provides a hot lunch on Thursdays, and Pastor Rudy Sheptock of The Lighthouse Church, which allows “no perfect people” as examples of those who “give addicts the love they deserve.”

“If you know better, do better. Now let’s do better,” Agger said.

Victoria, a recovering addict and alcoholic, before she began reading her statement stated, “I don’t look like a typical addict, and I also have a criminal record. I am a lucky member of the Cape May County Drug Court program. I am extremely lucky. I am the face of addiction.”

She recalled a childhood in which she suffered depression. Feeling “so lost and hurting I had no identity and perfected how to live a lie.” As such, she “played the party girl” during teen years. She experimented with drugs first at age 14. She described her drug use as “experimental to self-medicate.”

“I would love to see someone work with a person is early recovery,” she said.

“We can’t give up on the 12-Step Program,” she said, “But someone may only need to go to 10 meetings. There should be fewer stigmas on addicts. Addiction is complicated. If affects brain function. No single treatment is effective for everyone,” she said.

She believes there should be a removal of addicts as being “bad people.” “I want to go into jail and tell young men and women. I want to offer hope. That was my biggest roadblock. If I can help one person, if I can hold their hand my journey of pain and suffering would have been worth it,” she concluded.

Shim, a former pharmacist, noted two years ago, he learned a good friend from Wildwood Crest, who owns a successful business, was addicted to Oxycontin.

“I was a pharmacist. It hurt me to the core of my being. It was splitting their family apart. Those who have addicts know that. The mother wants to love the child and the father wants tough love,” Shim said.

“We are trying, that is all I can tell you. If we could start a think tank, parent-to-parent,” he added. “Try to remove the profit out of it. I think we need parents who have lost their children because they are doing it for the only true reason there is. They may have their solutions. I think about that all the time,” Shim said.

A father of four, Shim continued, “I am the punishment side. I hear certain things. I don’t know what we can really do. Punishment is a part of it, but I don’t know how to incorporate it in. A parent should be able to commit their child.” That is not possible with the present set of laws, only a court order can do that for an adult child.

Drug Court is for persons who are “determined to be going to state prison.” Such are placed in Track one. “Those are people who are in mandatory drug court,” Shim said.

Track two are persons who may not go to jail, but who have voluntarily submitted an application for Drug Court. They must accompany that with their criminal record. No person who has committed acts of violence is admitted into the program.

Shim said a task evaluator in the Probation Department will make a recommendation, which will go before Porto, who decides whether the person is allowed to participate in Drug Court.

Those admitted are given an opportunity to resolve all criminal cases. “If they screw up they will get this prison number,” Shim said.

Success is not guaranteed, Shim said. Citing Victoria for recovering, he said there was a female a month away from completing the program, who violated one of its tenents, and was ousted. “There are failures. We have to set limits from the criminal perspective,” Shim said.

He said he will often “let the parents know I understand. That it is required of me, I do what I do. Victims are left when you do certain things.” Shim said he has thought about talking to legislators in an attempt to change expungement laws. That way, once a person who has completed a drug-related sentence could, under certain circumstances, have a clean record, not one that will cloud their future forever.

Such a law would aid addicts such as Kyle. He told the gathering he agreed with Victoria on needing hope.

When you are an addict everything seems like it’s coming down on you. I am looking at drug court right not.” He noted the expungement would be appealing. When an addict returns home, “Show him how his life can get better.”

Kyle said he attended Camden County College, had 11 years’ experience at a luxury car dealership, and got fired for drug use. He cannot get a job now, since he has a criminal record. He had $60,000 in his 401(k) retirement account, now gone, and had been making $70,000 annually.

“I can’t go back to the dealership. What do I do with my life? It would be easy for me to relapse, throwing me back in jail, I did nine months. Guys in there talked about being around drugs all day. Talking about not using, not when you’re in jail,” Kyle said.

“We can’t help unless they tell us,” Gabor said at the evening’s end. “They are not alone in your community. They come from all different walks of life. I am touched and affected by all this I will try to help take all this information.”

She noted the next step will be to review all the ideas presented and recorded on the four easels and see which are the most important, then formulate a blueprint.

“It takes people to make it change. The next step will be the hardest to see what we can do we will work together to try to get it done. Are you up for that?” she concluded. Applause erupted.