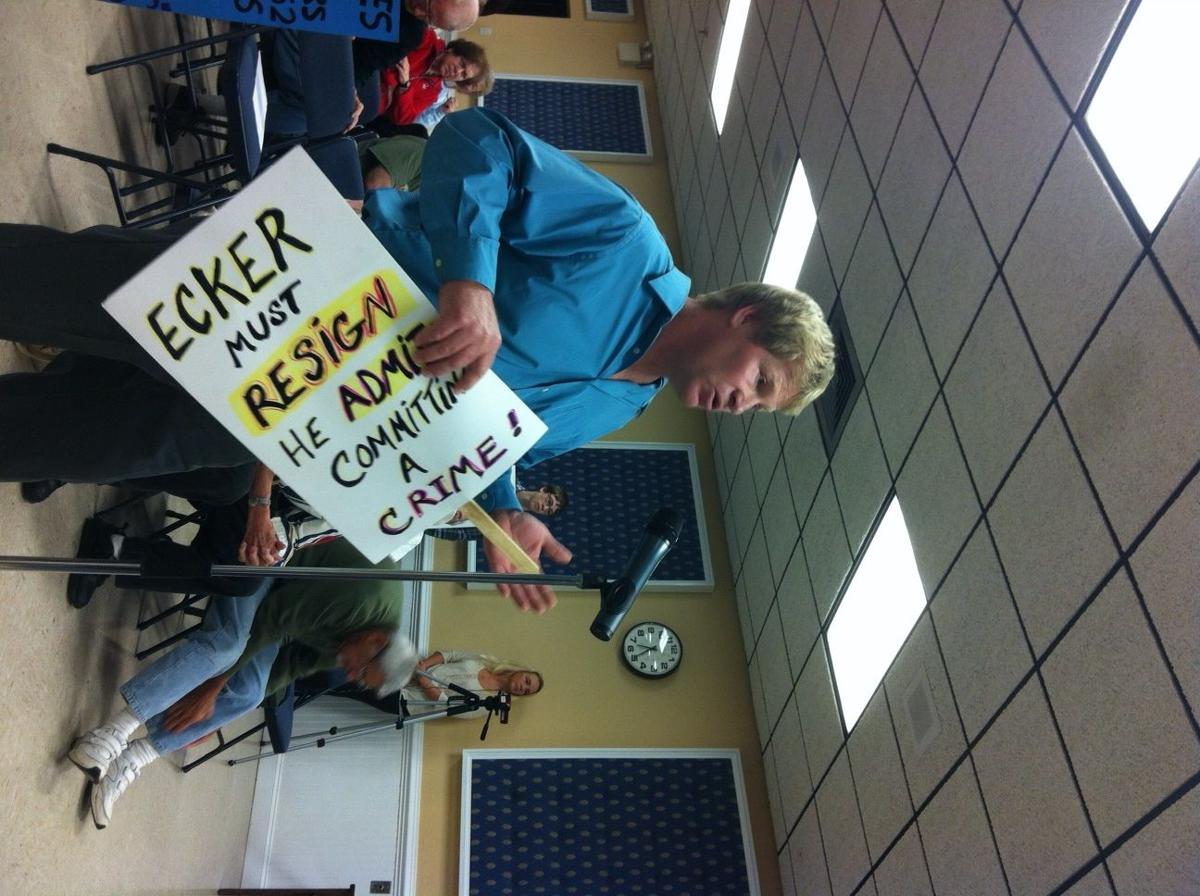 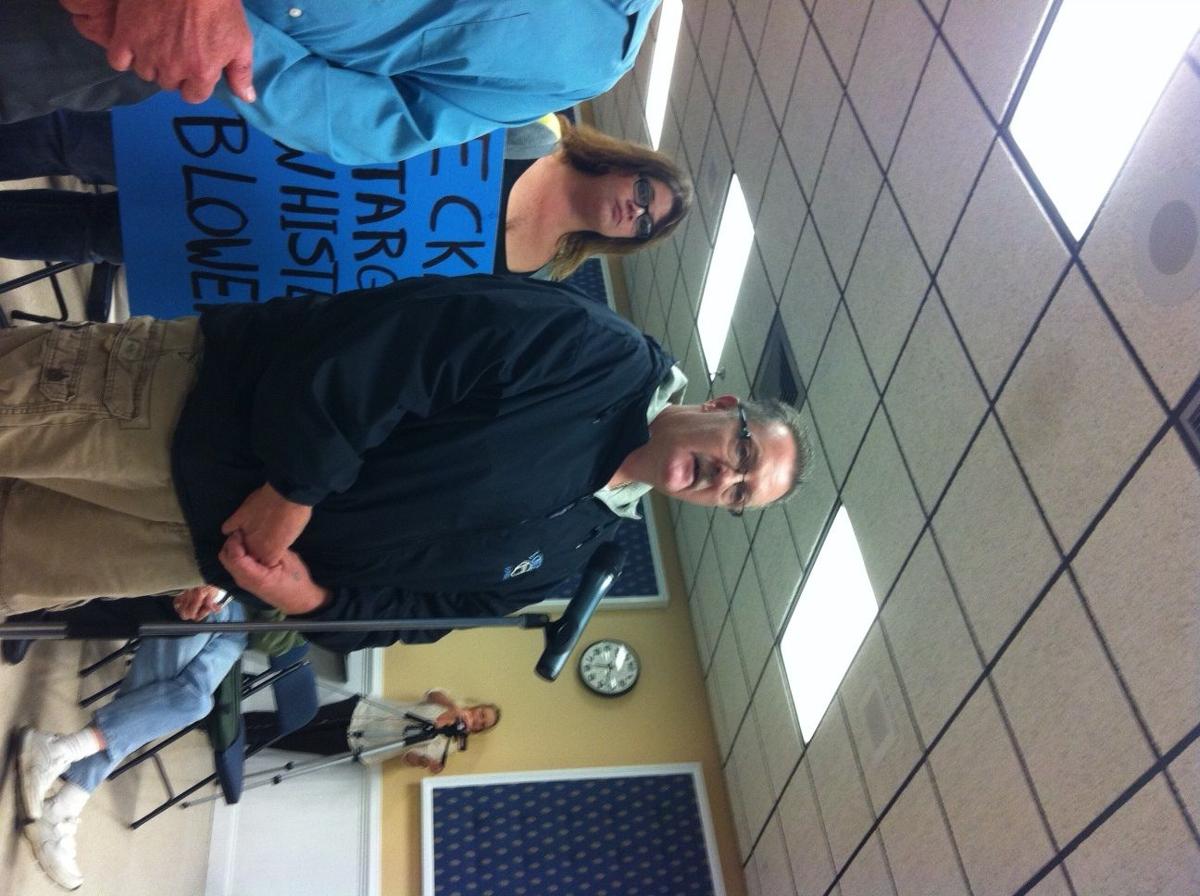 VILLAS – Once again the Lower Township Municipal Utilities Authority (MUA) took center stage at council’s regular meeting on Oct. 21. One by one, current and former MUA employees, their family members and supporters approached the microphone and aired their grievances concerning MUA Executive Director Matthew Ecker. Ecker has been accused of assaulting and harassing MUA employees. During a special meeting of the MUA on Oct. 17, the board of commissioners voted to suspend Ecker 60 days with pay while the county prosecutor’s office investigates the allegations.

Bill Dunn, who was terminated by the MUA, took issue with what he, and others, called “a vacation” for Ecker. “I’ve been out of work for two and a half months, without a dime of pay on charges they can’t prove,” said Dunn. “How does this board feel that they’re doing their job down there? You have two board members being stonewalled by three of Ecker’s buddies.”

Township Solicitor Charles Sandman commented on council’s behalf. He explained to Dunn and those in attendance that council was aware of the escalating problems at the MUA, but until the investigation was completed, council would refrain from making any decisions. “From our perspective, it appears that the MUA is doing everything that they can do up to this point,” said Sandman.

Many of the individuals who addressed council recalled their own experiences with Ecker. Adam Witkowsky, of Villas, claimed to have a video of Ecker “ranting and raving” at his home. Jesse Matsinger, of North Cape May, said he was physically assaulted by Ecker for no other reason than Ecker was angry.

“Just like you need our support at times when we’re voting, well now these voters need your support,” said Matsinger. “We need you guys to step up and do what’s right. Put pressure on that board.”

Sandman reiterated that the evidence would have to be weighed before any decisions were made. “From looking around this room and hearing the comments that all of you folks have made it’s a matter that most certainly needs to be looked into in detail, and that’s what they’re doing,” he said.

Emotions ran high. At times members of the crowd took to shouting, sometimes drowning out the individual at the microphone.

Mayor Michael Beck reminded those in attendance, “we have a sense of decorum in here, and we want to keep it that way.”

When it was his chance to speak, Tom Quinn, of Villas, had only one request. “Pay Mr. Dunn while the investigation’s going on,” Quinn demanded. “Pay Mr. Dunn! Pay Mr. Dunn his money!”

Not everyone in attendance was in agreement. Janet Pitts, of Villas, sympathized with council and argued against the vocal expectations of their authority. “I never saw so much political contention in my entire life. This is a joke,” Pitts said.

“This is premature for you [council] to jump in,” Pitts continued. “People are making allegations and naming people. I hope they can substantiate it because there might be some reverse lawsuits there.”

Nancy Embs, of North Cape May, and wife to Don Embs, an MUA employee, told council this wasn’t just an MUA problem, but a family problem as well. “My husband is being retaliated against, harassed on a daily basis. He has sought out medical treatment and psychiatric counseling for issues that Matt [Ecker] has imposed on him.”

Sandman tried to assure the crowd that council was taking the issue seriously and that they would get to the bottom of it as soon as possible. “To have it linger on is not only costly, but it’s wearing on the individuals involved. Nobody wants this thing to drag on,” Sandman said.

He explained that the situation was like any other process within the courts that requires a thorough investigation. “You wouldn’t want to live in a community where someone could accuse you of something and then they just exact punishment without getting to the bottom of it,” Sandman said.

Tom Frisoli and Harrison “Pete” Bitting, both members of the MUA board of commissioners, were in attendance and they made clear their feelings on the subject.

“I still say he (Ecker) should be terminated,” said Bitting. “He’s got his own rules and regulations down there that if anybody hits anybody then you’re automatically terminated. He did that, and he violated every one of his own rules that he wrote.”

The crowd cheered, much like they did each time someone approached council and spoke out against Ecker. But when Rick Ryan, of Villas, asked Sandman what would happen if the solicitor went behind closed doors and struck Beck, Sandman’s attempt at a joke fell flat.

“Well it depends on if he deserved it,” answered Sandman. Gauging the crowd’s reaction, Sandman quickly apologized. “I don’t mean to make light,” Sandman insisted, telling the crowd it was a poor choice of words.

City Manager Mike Voll had the last word and he assured the public that the prosecutor’s office had been notified in the hopes of expediting the process. “The governing body has heard a lot tonight and I can tell you it’s painful,” said Voll. “It’s painful to me because they [council] care about each and every one of you.”