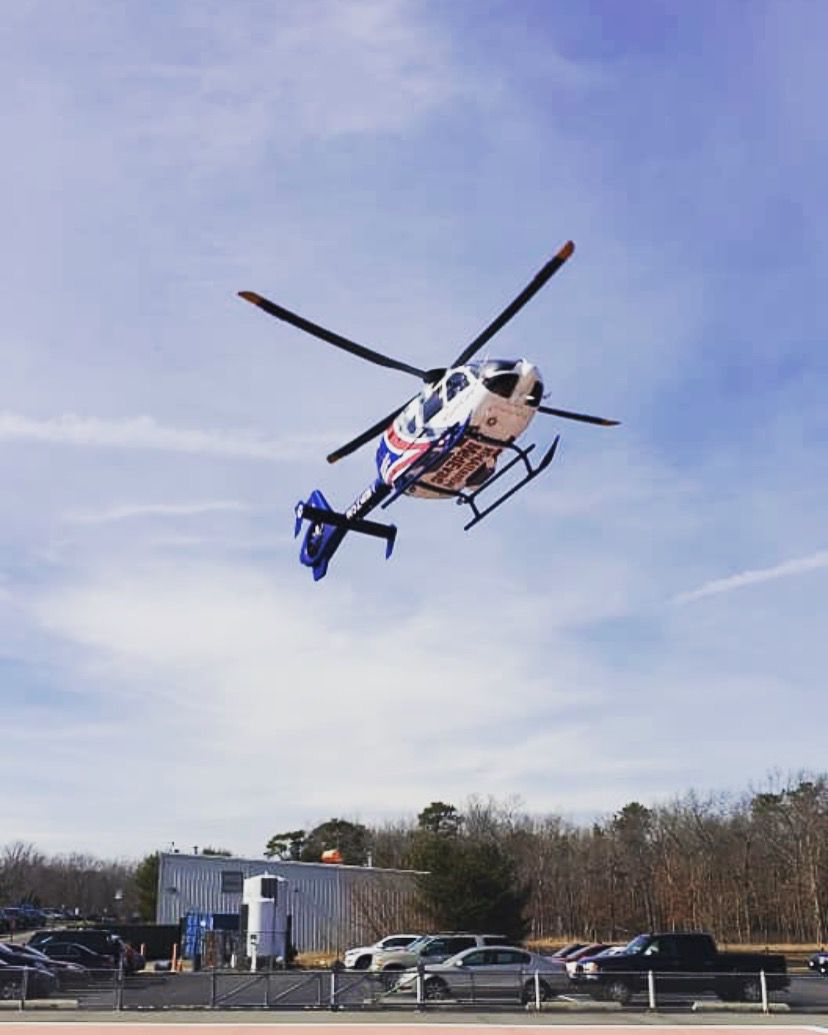 Each municipality is required to designate landing zones for 9-1-1 calls. Improvised landing zones might occur based on incident location. 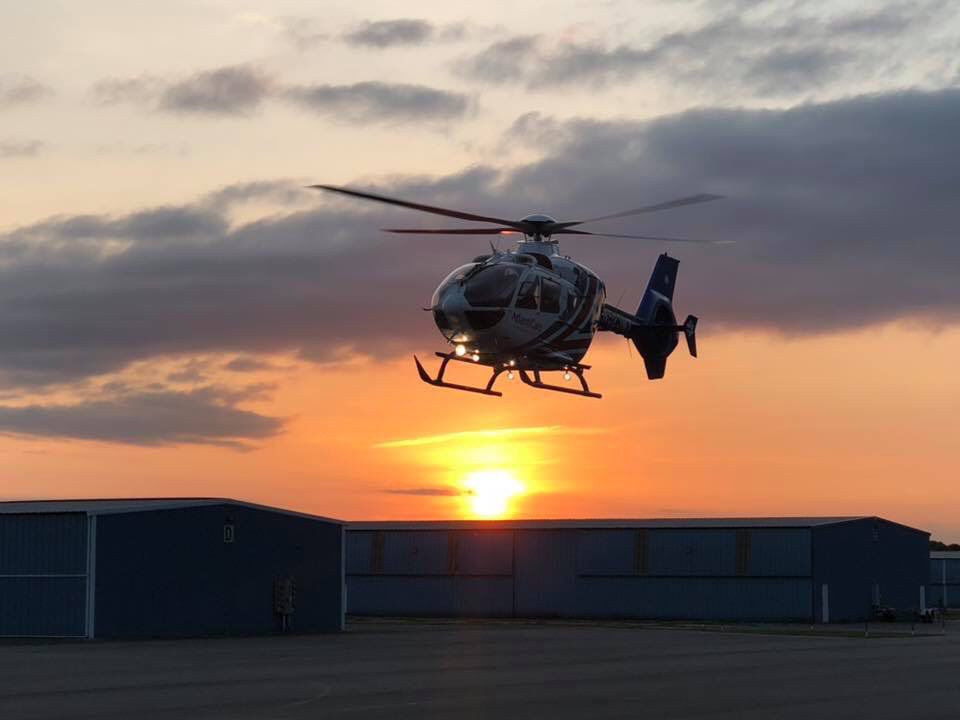 The MidAtlantic MedEvac 4 helicopter departs Woodbine for an inter-facility flight. Last year, air ambulances were called to 63 incidents in the county. 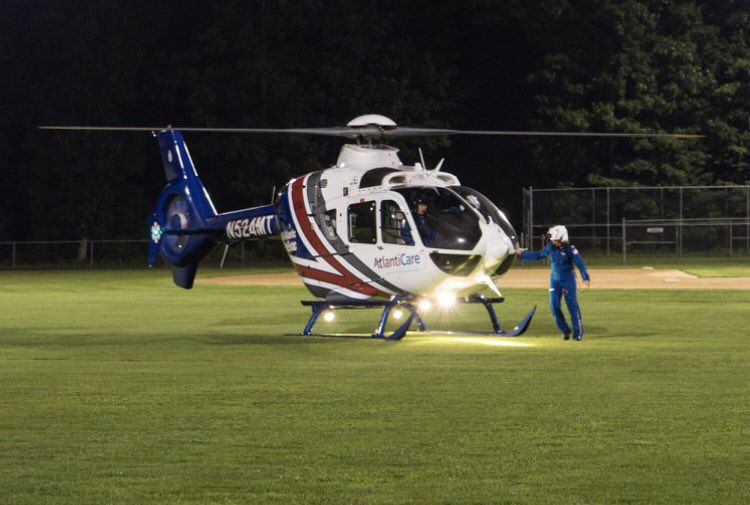 Many different factors, including what is going on with the patient, facility, weather, etc., impact the mode of transportation and destination for patients needing critical care. 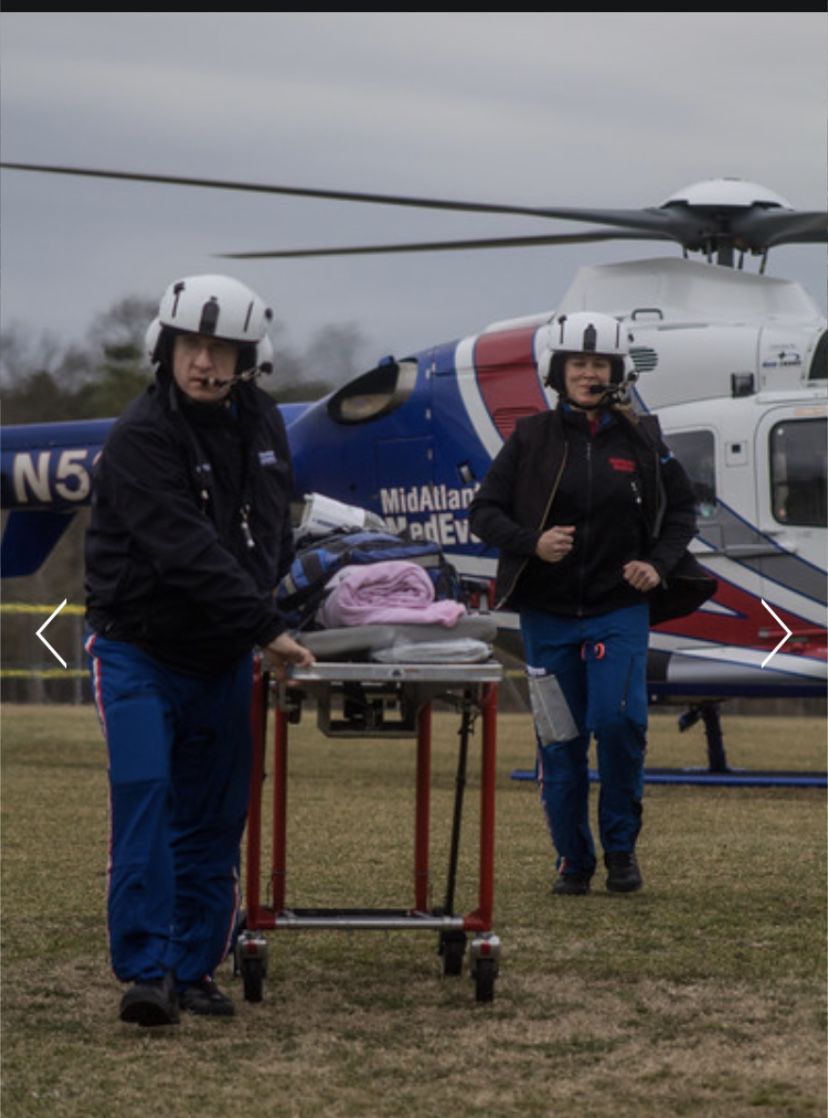 Flight crews on medevac helicopters are highly trained in aviation and medical areas. 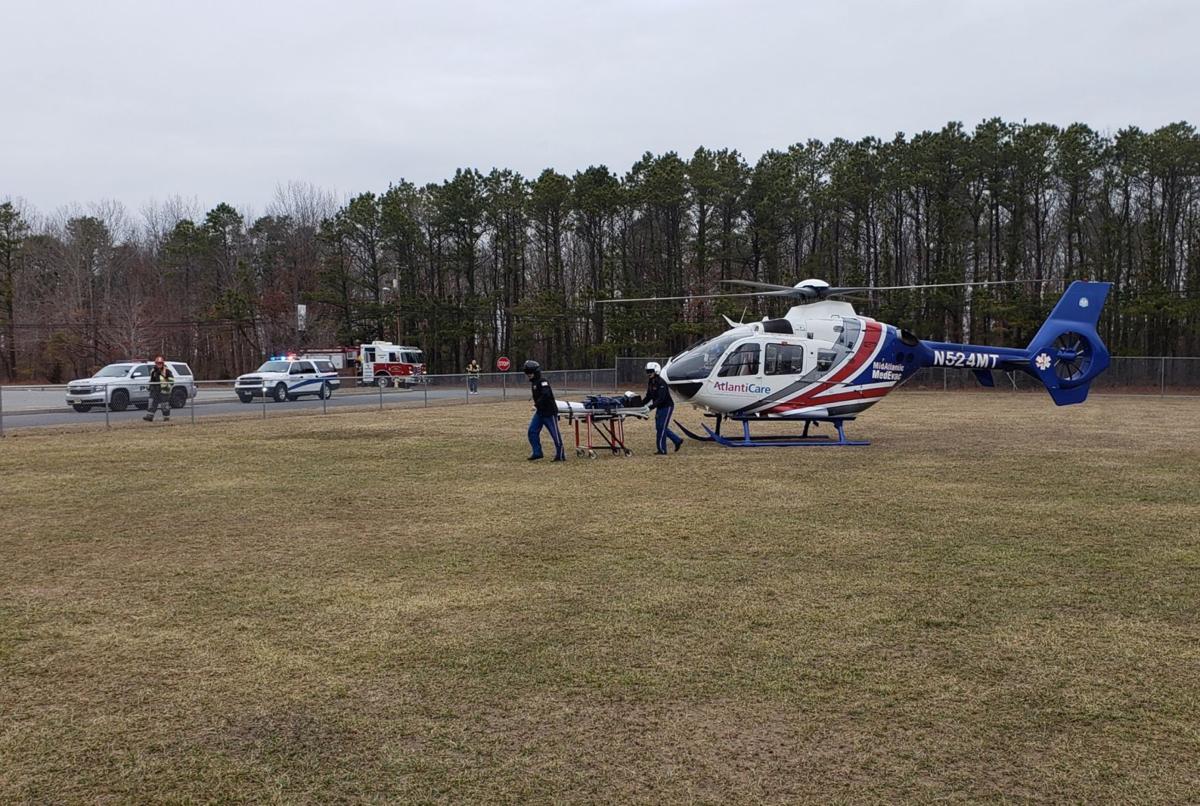 When a medevac helicopter is needed, fire department crews are on hand in case there is a crash. Operational safety is vital. 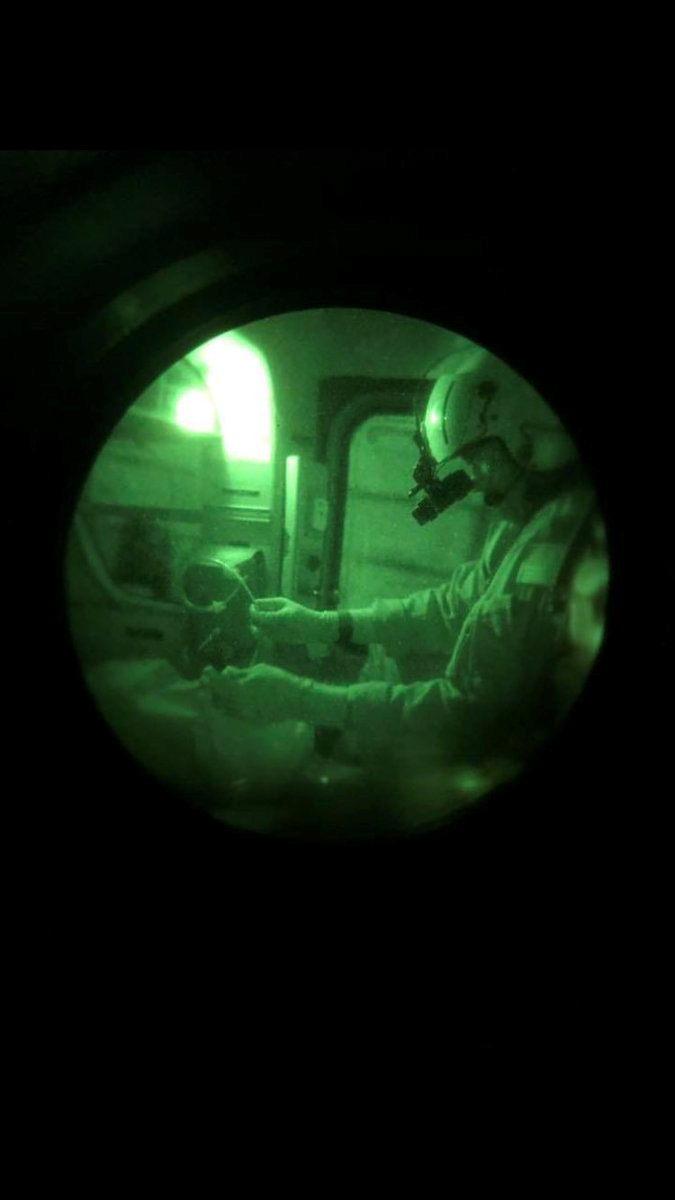 Highly skilled flight crews need to be able to perform their duties in the small confines of a helicopter.

Each municipality is required to designate landing zones for 9-1-1 calls. Improvised landing zones might occur based on incident location.

The MidAtlantic MedEvac 4 helicopter departs Woodbine for an inter-facility flight. Last year, air ambulances were called to 63 incidents in the county.

Many different factors, including what is going on with the patient, facility, weather, etc., impact the mode of transportation and destination for patients needing critical care.

Flight crews on medevac helicopters are highly trained in aviation and medical areas.

When a medevac helicopter is needed, fire department crews are on hand in case there is a crash. Operational safety is vital.

Highly skilled flight crews need to be able to perform their duties in the small confines of a helicopter.

Anyone who has watched an episode of "M*A*S*H" is probably familiar with the chop-chop sounds of the medevac helicopter used to transport the injured during the Korean War.

While treating patients in flight originatedin the military, civilian use of aircraft as ambulances probably began incidentally in remote locations with "bush pilots" at the helm.

Today, those pilots and their crews are highly skilled medical personnel who not only know how to provide emergency services within a cramped helicopter, but also know which medical facilities provide the care that's needed, especially within the "golden hour," that period of time when prompt medical or surgical treatment will prevent death.

Goal: Getting It Right the First Time

"Our goal is to get the right patient to the right place with the right mode of transportation the first time, every time," said Dr. Brett Greenfield, medical director, MidAtlantic MedEvac and AtlantiCare Emergency Medical Services (EMS). His teams service primarily Cape May and southern Atlantic counties.

According to Cape May Fire Chief Alexander Coulter, EMS technicians are among the first at the scene of a 911 call or accident. Next to arrive would include paramedics from AtlantiCare, the difference being the type of duties each are qualified to perform.

"Providers follow state and national criteria in determining whether an ambulance or medevac helicopter is needed," Greenfield said, citing auto or boating accidents, burn victims, and those suffering a stroke or heart attack as examples when a chopper might be called into service.

Coulter added that a medical doctor is also available during the incident to answer questions and provide instructions for any in-flight care.

The patient's weight and height play a role in the decision of how to transport the patient, according to Coulter, as well as the type of injury. "Someone who has a traction splint for a broken femur may not fit," he noted.

Heavy traffic, especially between Memorial Day and Labor Day, can also be a factor in the decision of how the patient is transported to the medical facility, Greenfield added.

Each municipality in the state has designated landing zones for 911 calls, according to Greenfield. In Cape May County, one frequently used landing zone is near the New Jersey National Guard armory in Court House, while another is located at the Cape May City Elementary School.

"Operational safety becomes an issue, so the pilots prefer to land in a pre-designated landing zone," Greenfield said. "However, that's not always the case. If there is an accident on the Garden State Parkway or Atlantic City Expressway, for example, we may have to improvise."

When there is a need to improvise, there is also a need for the fire department to be called to the landing zone because of a potential of a crash, according to Coulter. "If it's at night, you need lights, for example," he added.

Choppers Come in All Sizes

As a hands-on medical director, Greenfield flies with his crews and provides emergency care along with them. A pilot, critical care nurse, and paramedic typically accompany the flight when it's called into service for 911 or "scene" flights.

In Cape May County, their chopper is stationed at Woodbine Municipal Airport and is available 24/7.

"Helicopters come in all shapes and sizes, but the pilot knows the equipment, where to go, how much fuel is needed, everything to operate the aircraft safely," Greenfield pointed out. "There could be thunderstorms, fog, or the hospital may not be able to take care of the patient because they are too busy or staff aren't available. We provide a high level of care by well-trained staff but the aviation world dictates where we go."

Where the patient is taken depends not only on the medical and aviation issues but the facility's expertise. Greenfield explained the state has designated certain places as trauma centers, cardiac and complex stroke centers. "If a child is the patient, we need to get them to a pediatric hospital, for example," he added. "A burn victim needs to go to a burn center."

The care also comes with a high price tag, averaging from $12,000-$25,000 for a 52-mile trip, according to the National Association of Insurance Commissioners. Whether insurance covers the full amount depends on the patient’s insurance coverage. The remaining costs that are not covered are billed to the patient.

"Across the air medical industry, the average flight cost breakdown is the result of costs associated with maintaining on-call availability 24 hours a day, 365 days a year," explained Reid Vogel, director of marketing and corporate communications at Med-Trans, a partner with MidAtlantic MedEvac.

"The costs associated with providing emergent air medical transports are 87% fixed," he said. "Much like a city's fire or police department, that availability requires multiple crews (including pilots, nurses, paramedics and support staff), their salaries, the cost of helicopters and its maintenance, the physical air medical base, medical supplies, insurance, ongoing training and safety enhancements, and complying with federal transportation and health regulations.

"As for insurance, many insurance companies recognize the importance and value of air medical services, and over the last several years, we’ve become in-network providers with a greater number of insurers," Vogel said.

It was in 2006 when the state Department of Health and Senior Services began licensing private companies to provide air ambulatory services. Before that, New Jersey State Police provided the services. Besides AtlantiCare, many of the area's hospitals also have air ambulances that get called into service in the county.

Last year (2018), the medevac helicopters were called for 63 assignments in the county, compared to 107 in 2017 and 105 in 2016, according to the state. Choppers also get called for hospital-to-hospital transfers.

Jersey Emergency Medical Shock Trauma Air Response program (JEMSTAR), is the state-wide public air medical helicopter system based out of University Hospital, Newark. JEMSTAR I and JEMSTAR II are the two public helicopters in the JEMSTAR program that are operated by State Police and staffed with University Hospital paramedics and nurses.

The JEMSTAR program collects approximately $30 million a year through a $4 fee on motor vehicle registrations. The state Department of Health awards a multi-year grant to University Hospital to administer the clinical program and staff the helicopters. State Police use the remaining funds to operate and maintain the helicopters.