Starting at
$5.00 for 30 days
Get Started
View all rates
You are the owner of this article.
Edit Article Add New Article
Home
News
Community
Lifestyle
Opinion
DoTheShore
Public Records
Obituaries
Classifieds
Spout Off
Calendar
Subscribe
1 of 5 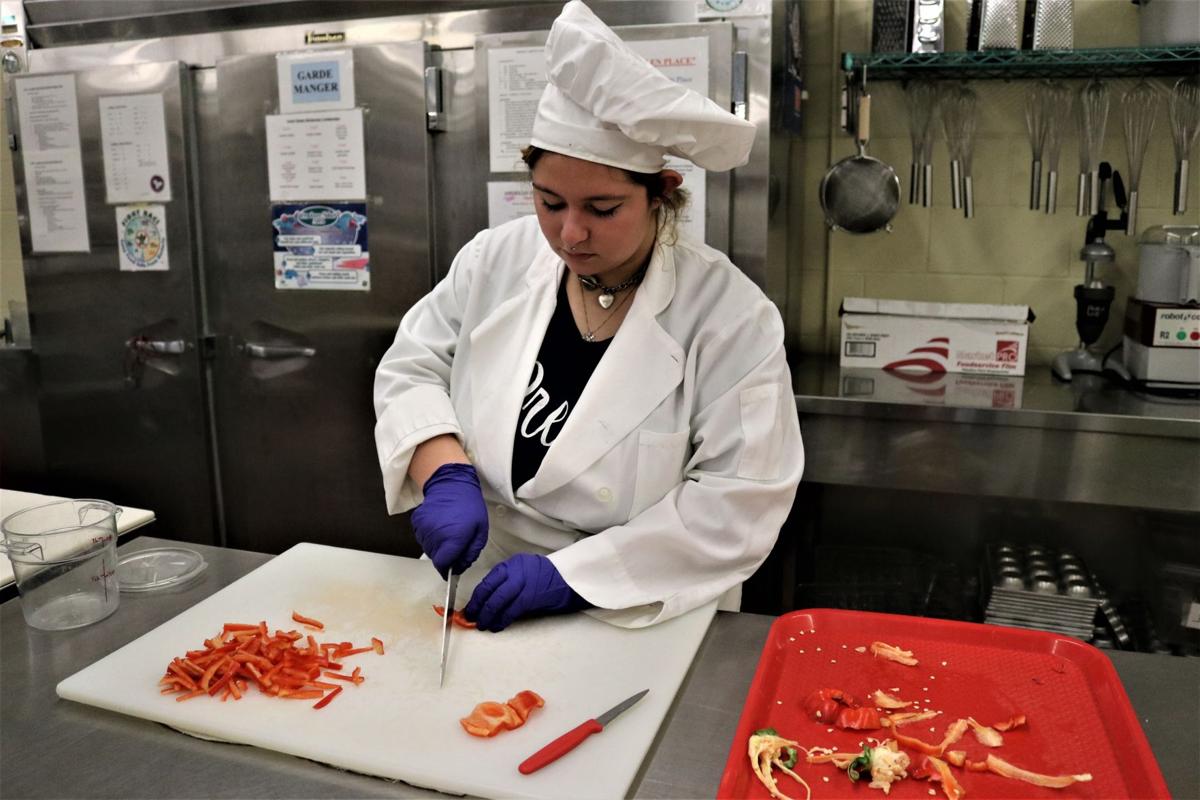 Destiny Corso, a 12th grader, from Wildwood Crest, chops vegetables as part of culinary class at Cape May County Technical High School. The scraps go into a compost bucket, which, in turn, feeds worms that feed the fish in the school aquaculture program. 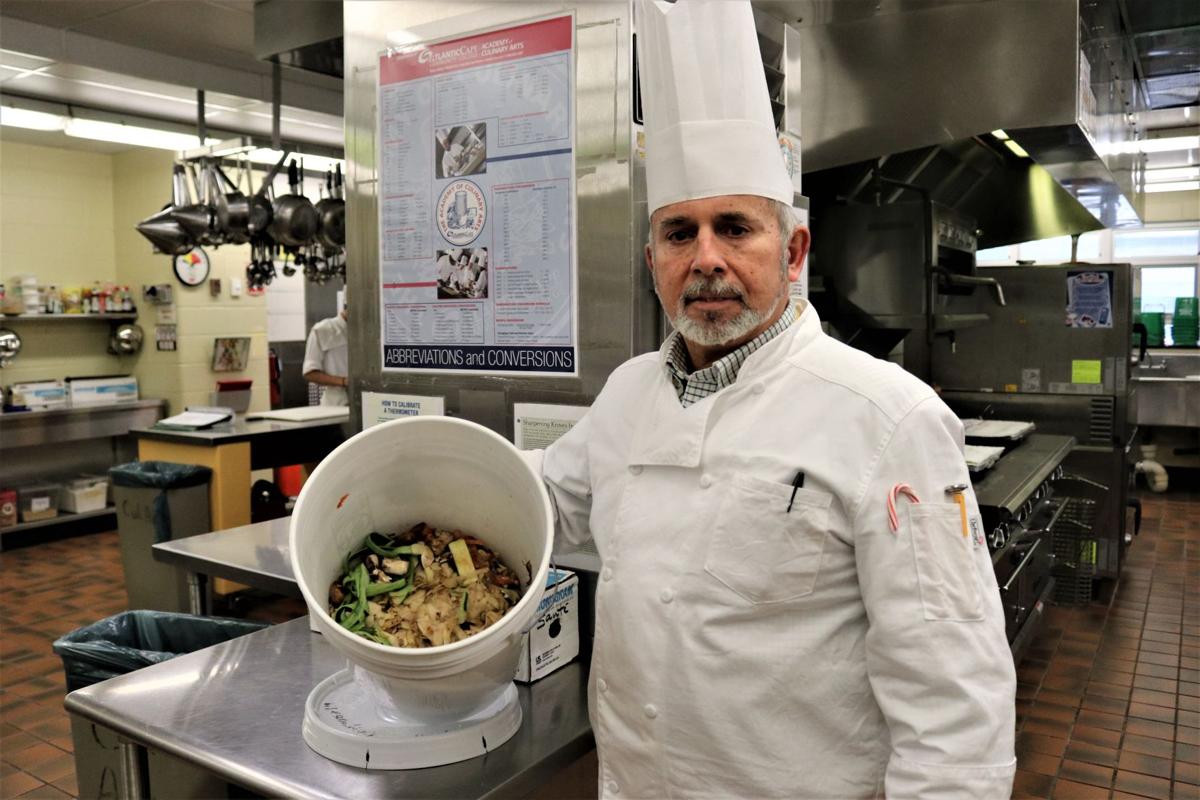 Culinary teacher Dave Masterson shows off the compost bucket his students use for scraps of vegetables. He and other teachers at Cape May County Technical High School bring elements of sustainability into every topic. 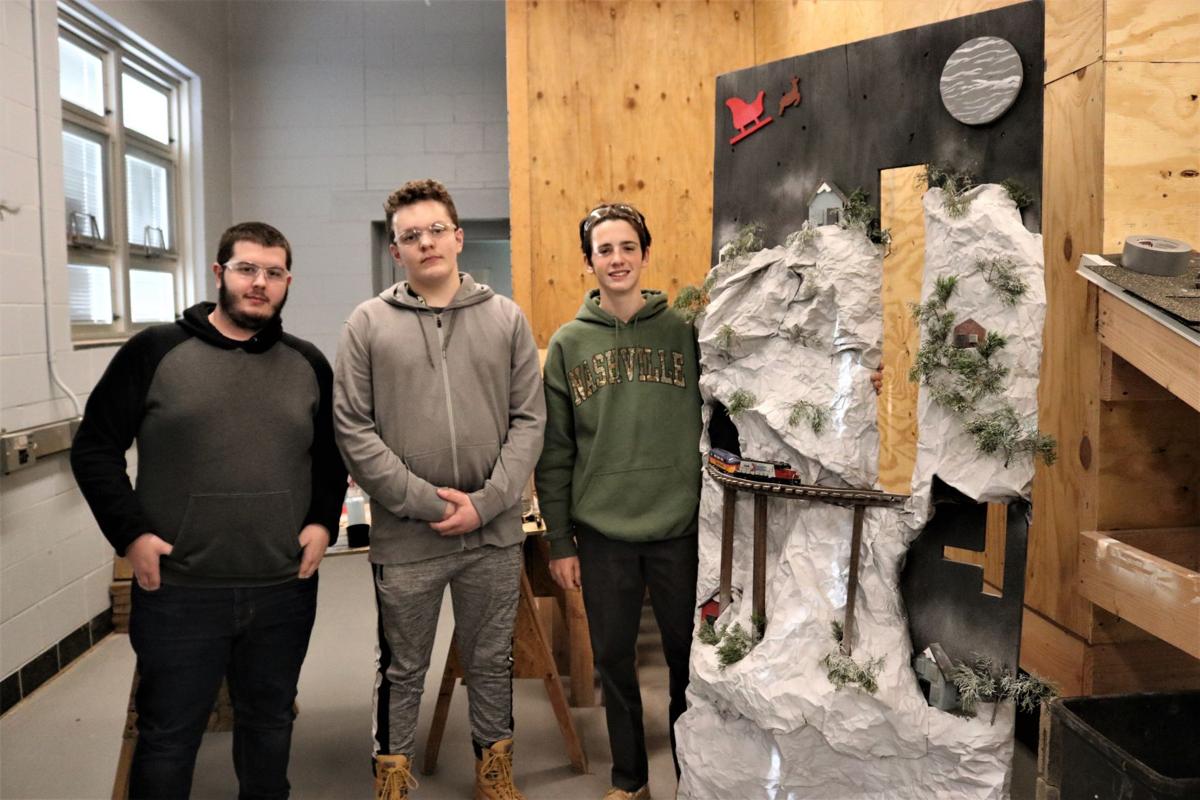 Seniors Skylar Whelan, Daniel Steele and Scotty Wiltshire show off a decorated door they worked on with other students in the carpentry and property maintenance class. 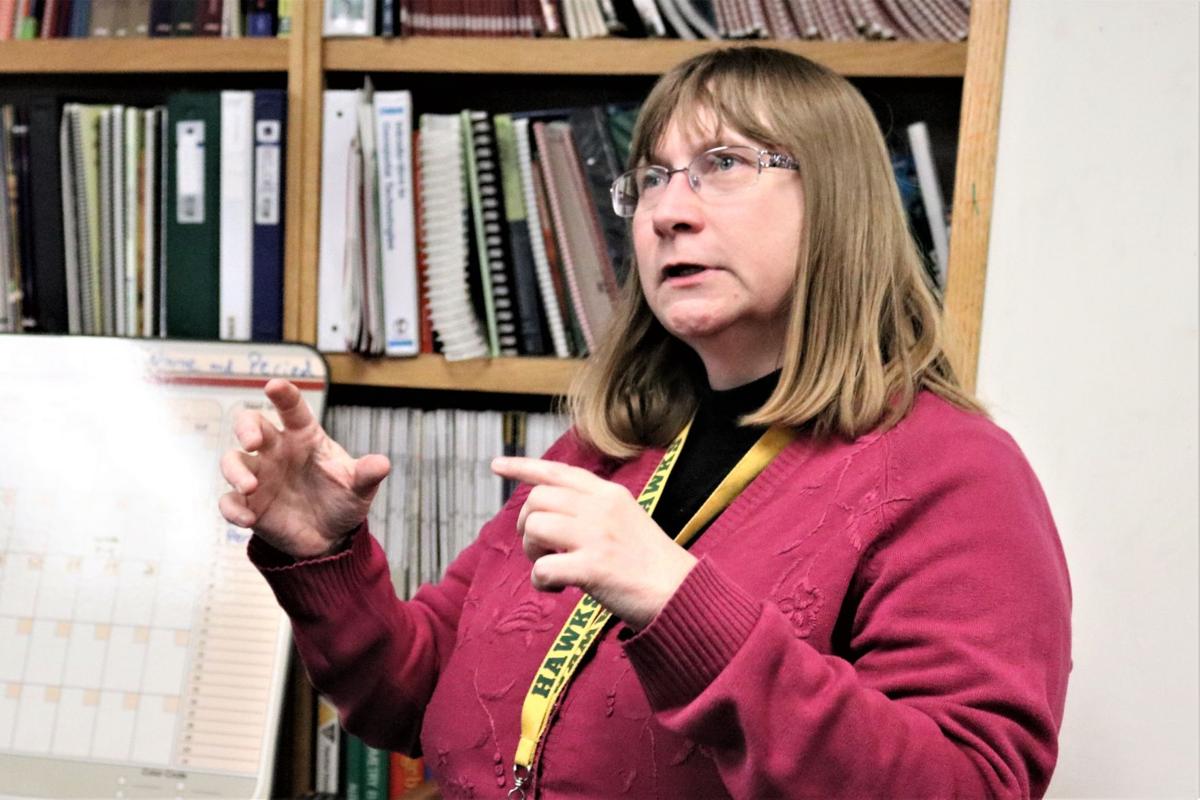 Teacher Julie Stratton talks about sustainability and how it became part of life at Cape Tech. 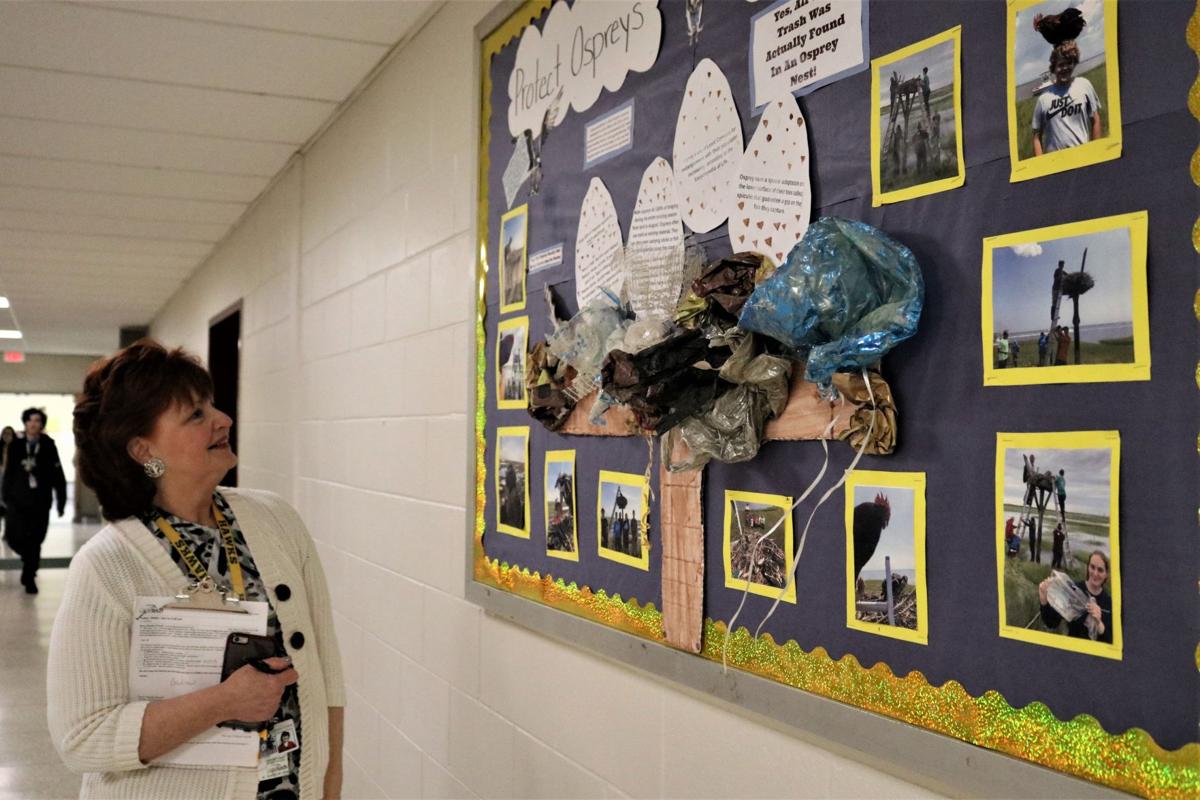 Nancy Wheeler Driscoll, director of curriculum and instruction for Cape Tech, describes a display depicting students’ work clearing plastic from osprey nests, which includes some of the recovered plastic.

CREST HAVEN – The deadline for the annual holiday door decorating contest was closing fast on a December afternoon, as Nancy Wheeler Driscoll shepherded a reporter through the classrooms of Cape May County Technical High School.

The elaborate decorations reflected the work happening in each room, along with the creativity of the students.

Wheeler Driscoll is the director of curriculum and instruction for Cape Tech, and a part-time tour guide. There was a lot to cover.

Sustainability issues are built into the district curriculum, according to Nancy Hudanich, district superintendent. In part, this is because the district staff and leadership are dedicated to protecting the environment, she said, but it’s also for the students.

Clean energy, environmental protection and the efficient use of resources will be increasingly important in the future, she said. She also made a similar point to what several others have said as part of this series – the practical application of topics helps students learn and understand how concepts and approaches can be applied in the real world, and can also help them retain what they’ve learned.

During a whirlwind tour of the school’s classrooms, students connected their lessons to sustainability and the environment. Students learn about solar energy and high-efficiency heating and air conditioning systems. The culinary students compost their scraps, while science students work on new methods to measure erosion and sea-level changes in the wetlands.

The school launched an environmental literacy and sustainability elective several years ago.

“The idea is we want people to be more aware of how sustainability fits into what they’re doing,” said Julie Stratton, a teacher at the school for more than 20 years, who has been a driving force in the sustainability education program.

The elective was open to students throughout the school, she said. The idea was that students focused on biology or the sciences were already interested in the environment. She wanted to reach the students who might not otherwise cover environmental issues in their regular classwork.

“We wanted the students from welding, or cosmetology or the culinary programs more than those already studying natural sciences, who likely already have an interest in the environment,” she said. “The idea is when you leave you don’t stop learning.

“If you’re not learning about what’s going on, that’s where a lot of our problems have come from,” Stratton continued. “It’s not because people are bad people, it’s because we don’t know enough about sustainability and how to make sure our lives are connecting with it.”

As questions on energy use or material choices arose in the elective, Stratton said, the students would ask them of their other teachers. Sometimes, that led to teachers connecting with Stratton or looking for answers themselves.

“It started with this elective and it’s branched out from there,” she said.

“We have sustainability embedded in every career and technical education program, but what we’ve done as a district is we’ve put our teachers together in professional learning teams that we call interdisciplinary teams,” said Wheeler Driscoll, “so that helps sustainability go across all content.”

High school senior Destiny Corso keeps her eyes on the cutting board as she chops vegetables for a project in the culinary school. The scraps will find their way into a mixture of onions, celery and carrots, which together make up the base for much of French cuisine. Called Mirepoix, it’s 50% onions and a quarter of each of the other ingredients.

“We use it for making all of our stocks and sauces, so instead of using fresh, we use the byproduct,” said Dave Masterson, culinary arts teacher. In keeping with kitchen tradition around the world, staff and students alike call him “chef.”

Whenever the students are cutting any of the vegetables, the scraps go toward the mirepoix, saving resources. That makes economic sense and environmental sense, he said.

The waste becomes compost, helped by worms that speed the process, keeping the food waste out of the landfill. Those worms, in turn, become food for the tilapia grown in the school’s aquaculture program, while the result of the composting is great for gardening.

In the carpentry and property management program, the school was a pilot program for New Jersey for green construction.

"The students are learning about green construction,” said Wheeler Driscoll, including construction techniques appropriate for New Jersey’s climate. They also reduce, reuse and recycle, she said, repurposing materials like wooden pallets for furniture and products.

Close by, students in the HVAC/Sustainable Energy work with solar energy. Teacher Charles Weiss talks about the solar panels installed outside, where one outbuilding is powered entirely by the photovoltaic panels on its roof.

Another panel heats water that is used in the classroom for cleanup and washing.

“The students maintain the classroom. They clean the floors, they mop the floors. We use the hot water for the mop bucket,” Weiss said. The students also get an understanding of how to connect and maintain the solar systems, along with other systems.

Continuing the tour, Wheeler Driscoll showed off the life sciences room, a huge space with fish, reptiles and mammals in tanks and cages. Along the hall, she talked about a student project cleaning plastic trash from osprey nests.

The birds of prey collect debris on the marsh for their nests, and they are not picky. Students pulled plastic bags and other debris from the nests, where it could otherwise injure fledgling birds. They also found the teacher’s hat, lost the year before on a similar project.

For some classes, the environment is the subject. Pre-engineering teacher Micah Wenker explained how his students have moved from using petroleum-based plastics to material created from corn, a more renewable resource that is also biodegradable.

The printers generate a three-dimensional model of designs the students create. A physical representation shows immediately if the design will work, but a lot of them don’t, so many are trashed.

Among the multiple projects students have undertaken is one to measure the marshland in Cape May County, to find out for certain whether the marshes are eroding or receding.

“How can we use data to see what’s happening in coastline communities?” Wenker said. Getting baseline data and then new information to compare it to is a fundamental part of environmental science.

“We focused on the drone aspect because that’s what we’re diving into now,” he said. Using GPS coordinates and a tide chart, the students map the existing marsh and will return to see what happens over the coming years. So far, some areas of the marsh have washed away, but there is not yet enough information to draw any conclusions, he said.

In each classroom, including others not mentioned, environmental issues are included in the discussion.

“The problem is I could spend the whole day in every single one of these rooms,” said Wheeler Driscoll.

It can be tough getting students excited about learning. Kevin Poltorak, a seventh and eighth-grade science teacher, in Dennis Township, found it can help if they get their hands dirty.