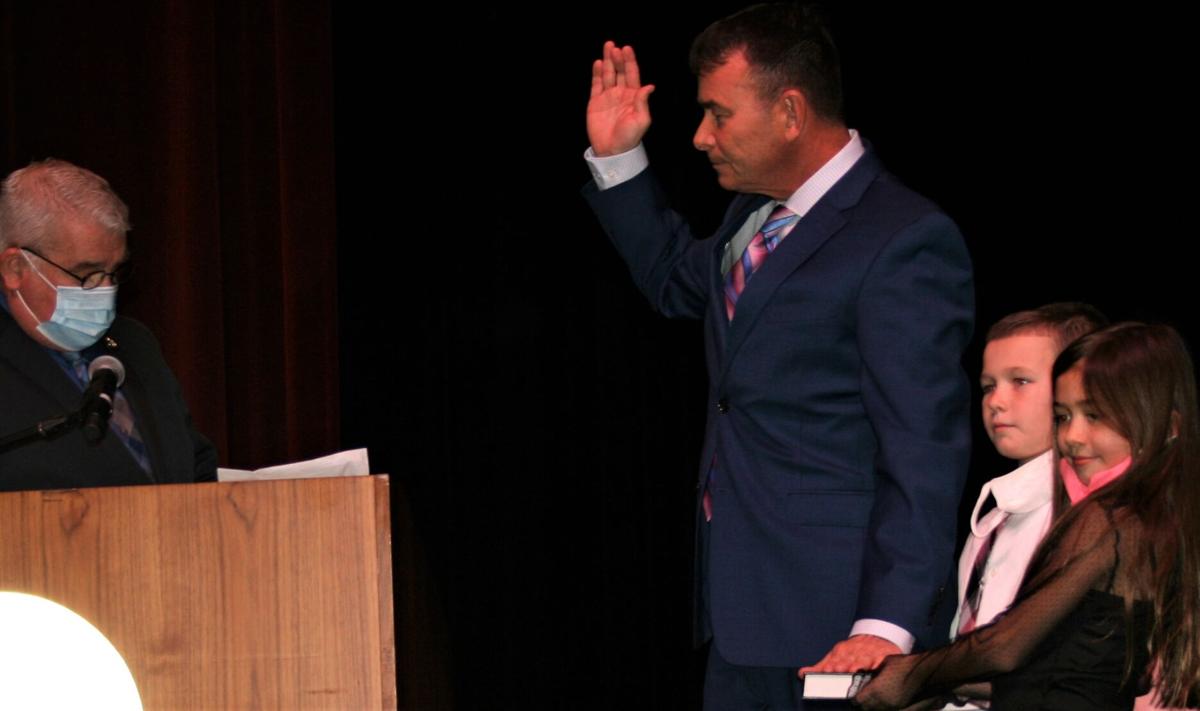 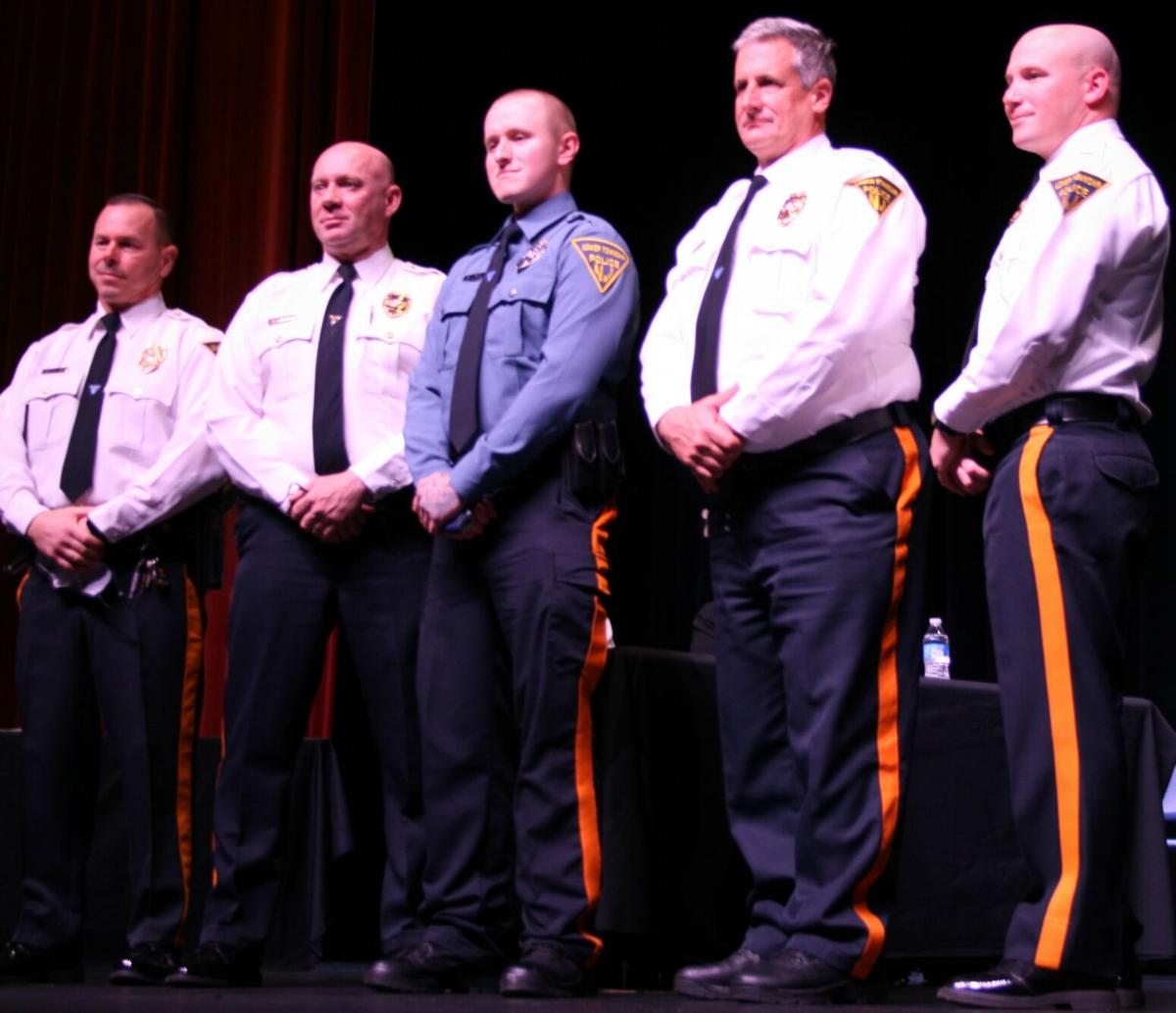 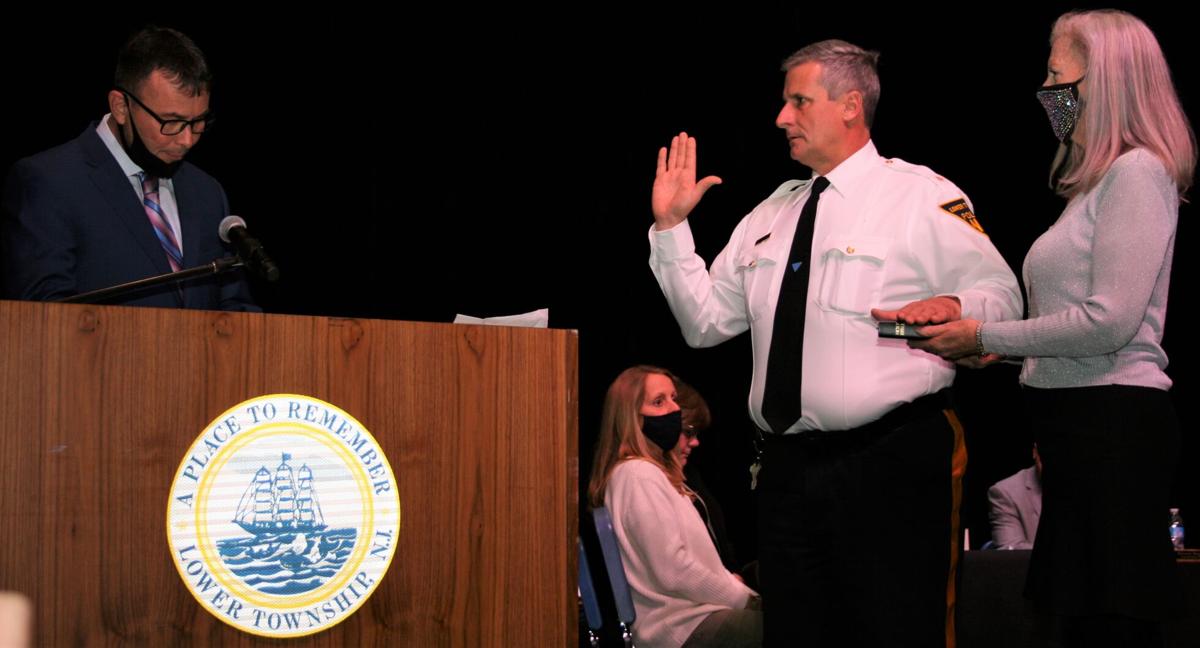 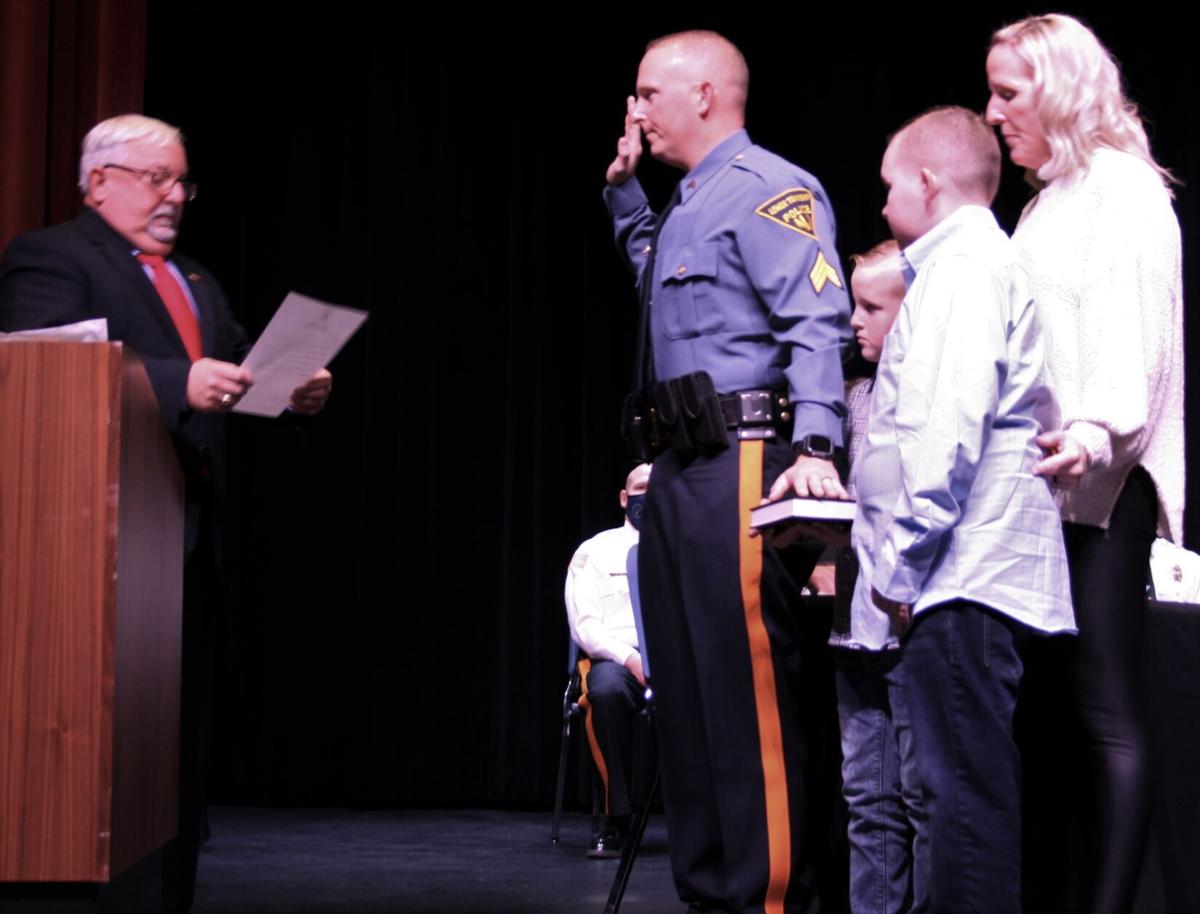 Sgt. Michael Perry is given the oath of office by his father, Lower Township Deputy Mayor David Perry. His sons, Michael and Madden, hold the Bible. His wife, Kourtney, pinned his new badge.

ERMA - 2020 brought a lot of changes to Lower Township and the world, but the municipality’s 2021 reorganization meeting retained the same mayor, council, and professional employees. However, there were some changes, including the venue of the meeting and new officers sworn into the Lower Township Police Department.

This year’s meeting was held Jan. 4, at Lower Cape May Regional High School's Paul W. Schmidtchen Theatre to accommodate the audience of family, friends and the public. Town Hall, in Villas, can only hold about 25 people due to Covid restrictions.

Everyone was required to wear a mask and only removed them to speak or have a picture taken.

Sippel addressed the crowd after being sworn, going through a list of accomplishments in the municipality, including refurbishing city parks and playgrounds, road work, including a major drainage project on Roseann Avenue, in North Cape May, and the continued generosity of the citizens.

“We held two food drives and filled 10 trucks with donated food and collected over $10,000 to provide other items. We held a toy drive to provide toys for children in need. We live in a great township,” said Sippel.

The mayor continued by looking ahead to challenges in the new year.

“I am pleased to work with my fellow council members to keep Lower Township an affordable place to live. We face great challenges and great opportunities ahead,” Sippel said.

Retired Police Chief William Mastriana was feted for his 28 years of service, and seven years and six months as chief.

“It was an honor and a privilege to serve. I couldn’t pick a better bunch of guys to take over. I want to thank my family for supporting me my entire career,” Mastriana said.

New Police Chief William Priole was administered the oath of office by Sippel. He served 29 years in the department and was instrumental in the renovations of the municipality’s public safety building and merger with county dispatch.

Priole said he isn’t one for making long speeches and was true to his word.

“We’ll continue to build on the work of Chief Mastiana,” Priole said.

Lt. Doug Whitten was recognized on his retirement from the force, and Officer Eric Danze received congratulations on his award from Mothers Against Drunk Drivers (M.A.D.D.).

Sgt. Michael Perry was given the oath of office after his promotion by his father, Lower Township Deputy Mayor David Perry.

“That was probably a once-in-a-lifetime moment,” Deputy Mayor Perry said.