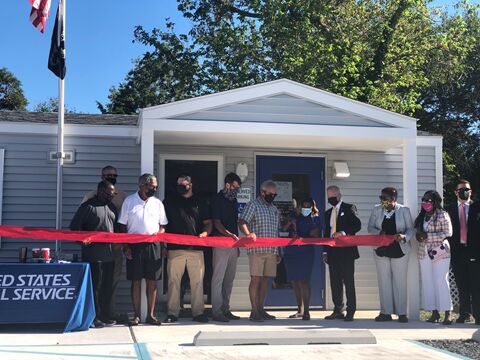 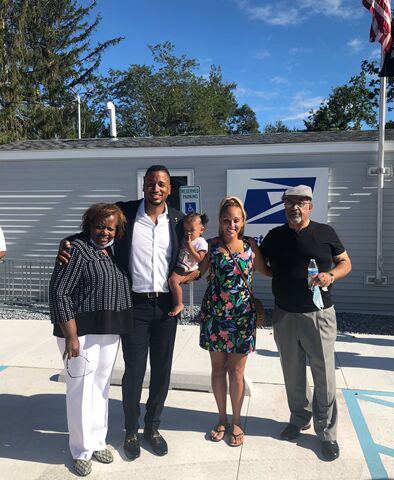 According to a release, the new building, which had a soft opening in July, preserves the Whitesboro ZIP code, continuing an important legacy for this Cape May County community. Whitesboro was founded, in 1901, as a place of opportunity for Black residents by George H. White.

White, the town’s namesake, was a Reconstructionist-era congressman, from North Carolina, who invited residents of the exclusively Black community to own and farm land.

“This is not just a post office, this is a symbol of the ZIP code that must move on,” Middle Township Mayor Tim Donahue stated, in front of the new post office at the high-visibility intersection of Route 9 and Main Street. “There’s a permanence to that, a meaning to that, there is a uniqueness to that, that tells the story of Whitesboro. This is something worth fighting for, something worth preserving, and now that we’re there, it’s been a long journey.”

Several years after its inception, Whitesboro grew into a thriving community, with churches, a school for children, a railroad station and the town’s first post office, according to a history from the Concerned Citizens of Whitesboro, but finding a permanent home for the new post office has taken longer than expected.

Whitesboro’s previous post office location closed, in 2018, because the building was in poor condition. Residents rallied for a replacement, and Middle Township approved a plan to lease property to the Postal Service.

Sept. 5's event was an occasion to celebrate not just the new post office, but George H. White’s considerable legacy. Three generations of White’s descendants, including his great-great-great nephew, John Campbell Jr., were on hand for the ribbon-cutting.

Campbell said he long knew of his ancestor’s distinguished professional background, but only found out that White was a congressman at a family reunion a few years ago.

The new Whitesboro Post Office is directly adjacent to a historical marker honoring George H. White, who, Campbell stated, “was able to identify the area as a place for African Americans to survive and thrive.”

Middle Township hopes the corner will become even more of a tribute to White’s legacy. Township Committee passed a resolution, in June 2019, to request that Congress designate the new postal building as the George H. White Post Office.

The effort has picked up momentum this year, as the NAACP State Conference passed a resolution to support renaming the Post Office. U.S. Rep. Jeff Van Drew (R-2nd) is spearheading the renaming push in Congress.

“What an amazing individual. What a role model for everyone. At the time he lived and the color that he was, he was a teacher, he was a doctor, he was a banker, he was a congressman and much more,” he stated. “It’s somebody who stays with us in our hearts to this day because of the name of the town and the location of the Post Office now.

For more photos and videos from the event, click here.