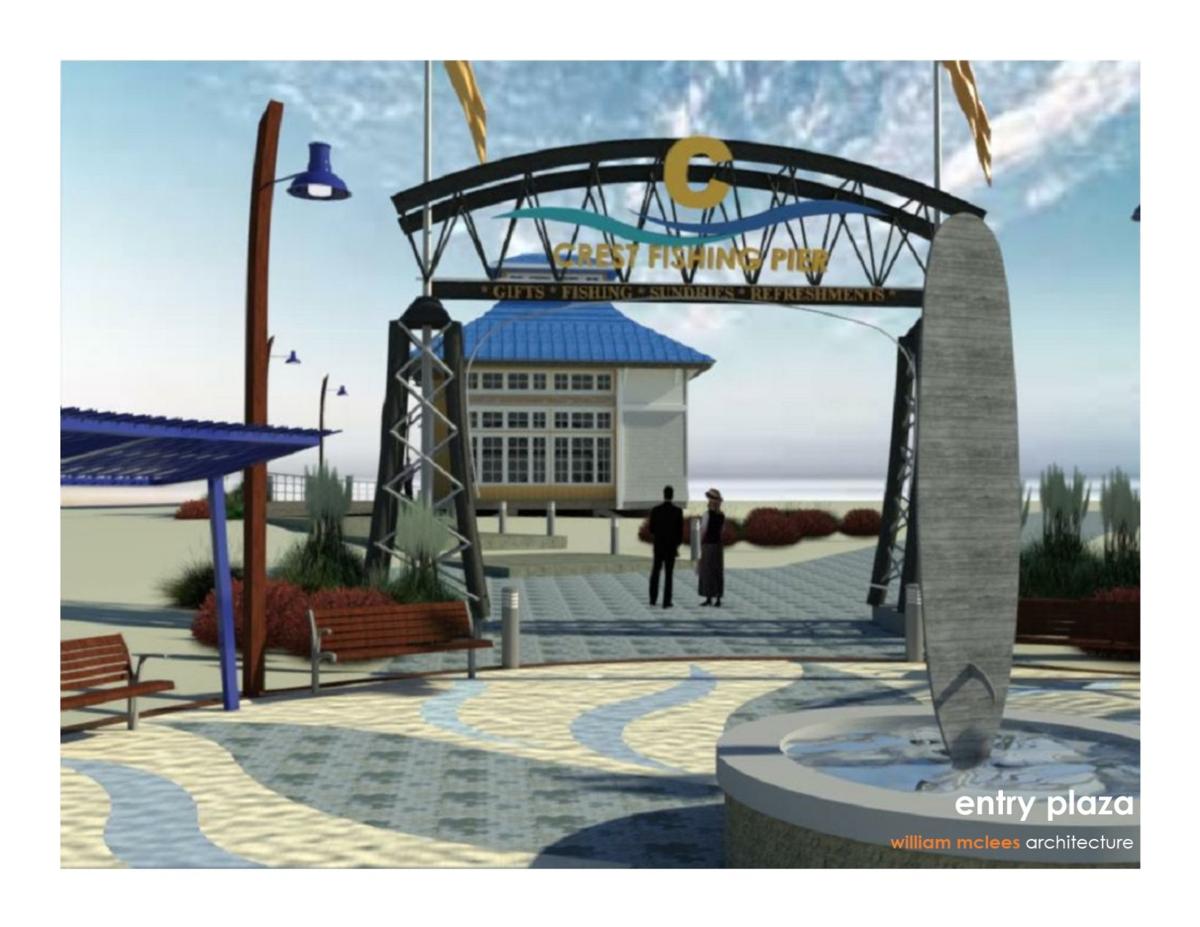 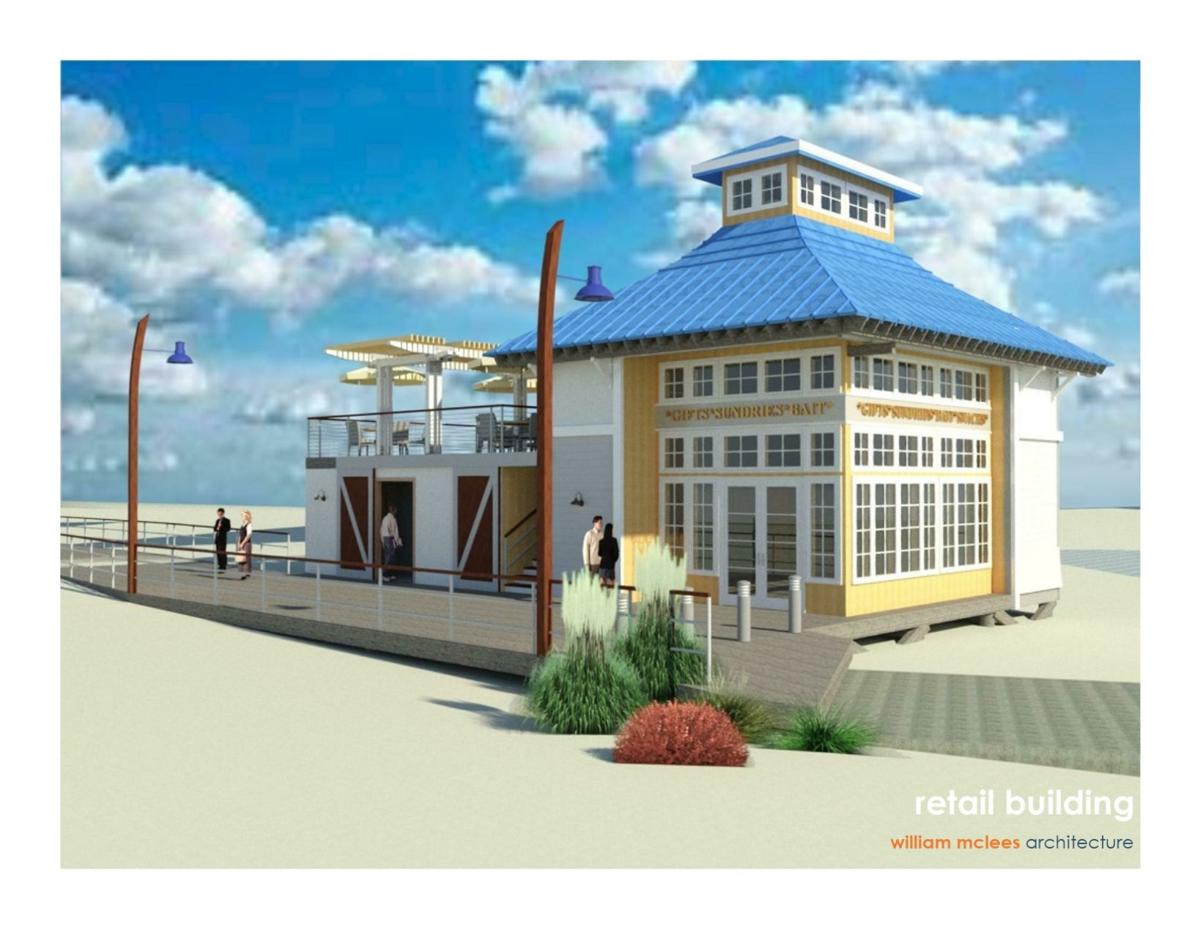 WILDWOOD CREST - A presentation was made Feb. 5, at a packed meeting of Wildwood Crest Borough Commissioners, on the plan for a new pier, which would take a Crest landmark and turn it into an improved tourist attraction, with potential shops or restaurants, vendors and fishing.

According to Mayor Don Cabrera, the project is estimated to cost $6-$9 million.

“We’ll never get this opportunity to preserve this pier,” Cabrera said. “This pier is part of Wildwood Crest.”

Renderings of the proposed new pier were shown on monitors.

“There won’t be an opportunity where 100% is covered by a grant," Cabrera said. “Don’t even put that thought in your head. We will need some tax dollars. I’m not going to lie.”

The new pier would stand at least 6 feet taller, and extend 500-1,000 feet longer than the pier at Heather Road and the beach. The proposed new pier would not utilize any of the existing structure, and would be entirely new construction, according to Architect William McLees.

“The existing pier needs to be elevated. There is not a practical way to elevate the pier, and make use of the existing pylons,” McLees said. The original pier was built over 100 years ago, according to Cabrera.

The entire pier would be new construction. According to #WWCrest architect William McLees:“The existing pier needs to be elevated. There is not really a practical way to elevate the pier and make use use of the existing pylons.”Mayor Don Cabrera est $6-9 million @HeraldNews pic.twitter.com/rJ0WnIO0iZ

Cabrera said an extension of 750 feet is “probably the right number.” The beach would also be shortened to build the dune, so the extension would seem greater. Crest Administrator Constance Mahon mentioned that a 1,000-foot extension would likely need to be done in cement, raising the price of construction 40%.

The Herald first reported on the proposed improvements in January (http://bit.ly/2QFMnrq), but at that time, the borough said it had no cost estimates.

The pressure is on to do the project quickly because the Army Corps of Engineers will be raising the dune line to 14 feet in the next few years to protect from a 100-year storm, and appease flood insurers. The current pier sits below the proposed dune line.

Once the dune line is built up, using sand harvested from the beach, the high tideline would be further up the shore, forcing more pier construction to be done over water, which is more expensive. The bottom line is the pier needs to be done before the dune.

“The DEP (state Department of Environmental Protection) alerted us to this early on. They learned this from the outfall project going on in Wildwood,” Mahon said. “The prices that came in on the length of that outfall pipe, because it was being built over open water, was far greater than anyone ever anticipated.”

The $6-$9 million price tag of the project gave pause to Deputy Mayor Joyce Gould, who said she was up until 4 a.m. before the meeting thinking about the project.

“You can shoot a cannon down the street, and it wouldn’t stop until it got to Atlantic City. That’s how little population we have,” Gould said, “so how are we going to pay for this? It’s a lot of money. You have to think about the money because, in the end, everything is about the money.”

#Wildwood #Crest Dep. Mayor Joyce Gould on Pier“I can shoot a cannon down the street and it wouldn’t stop until it got to AC. That’s how little population we have. So how are we going to pay for this? It’s a lot of money. You have to really think about the money.” @HeraldNews pic.twitter.com/gLqeTyDYu3

During the presentation, photos of successful piers in other towns were shown, and their positive benefits were discussed. Examples included the iconic Santa Monica Pier, and piers in Huntington Beach, Cal., Naples, Fla., Ft. Myers, Fla. and others.

Gould researched their populations, which exceed the Crest’s. She pointed out that most are in warm-weather destinations, where they can be used by the masses year-round, and most are in affluent towns.

“Your real name is ‘Mayor Vision,’ OK, and it’s a good vision. He has a lot of good ideas that come out of big cities,” Gould said, of Cabrera. “He’s seen things and he’s brought things back, and I think that’s great.”

Gould then scolded the mayor for not including more diversity on a three-person committee of residents, recently assembled to oversee the project planning.

“You didn’t have gender equality in your focus group. You had all men just about the same age,” Gould said. “There should have been at least one woman on there, or a younger person, or someone in their 70s because we are an older community.”

Cabrera responded that no women had requested to join, and that he would welcome the addition of a woman to the committee.

The borough used 16% of the $3.7million it paid into the county Open Space Board through taxes, according to the Crest’s Treasurer and Chief Financial Officer Francine Springer. The Crest hopes to make up a bulk of that disparity by securing major Open Space funding for the pier project. Cabrera put a target number at $2 million.

“You can guarantee that I will be meeting with all of the legislators, including Congressman Van Drew, to find the money to keep your dollars down,” Cabrera said, to taxpayers. “This does cost money, but we’re not going to stop until we’ve exhausted all opportunities.”

The mayor said that at the current stage, it’s just a concept, and the design could be tweaked based on comments from the public.

Several members of the community stood to share their memories and stories of the pier, and the crowd, overall, seemed in favor of the project, though some had tough questions for commissioners.

“The Crest pier was part of my family. It was part of who we are and what we did when it came to the morning, and going to the beach,” said Steve Del Monte, chief executive officer of DelMo Sports, a sporting event production company. “We’re smart with our money here. I think we can be smart with our money, as well as keep our history intact, and keep it there for generations to come. Obviously, I’m for it.”

Del Monte grew up on Heather Road, down the street from the pier, and is on the pier committee. Some hope Del Monte can use his influence, as a major triathlon organizer, to bring events to the new pier.

“There’s not a better guy who does events and sponsorships and all that in sports and athletics than Steve Del Monte. He’s vastly tapped into this,” said Jamie Peterson, a fellow committee member, who served previously as chairman of the board for the National Governing Body for Surfing.

“I would tell you and promise you, this could be the standout icons for surf events, one of them, if not the, on the East Coast,” Peterson said.

“Fishing is one aspect,” said Jason Hesley, the third committee member. “Fishing piers for 100 years, or at least 50 years, have gone hand in hand with the surfing culture. Surfers would be on the beach adjacent to it. There’s no reason we can’t have a surf contest, with people lined up on the pier, observing the contest.”

“In the '70s, this was the spot for surfing. In combination with the fishing, there’s quite a culture there,” said Peterson. “There’s such a rich tradition here.”

Major changes may be coming to the Wildwood Crest fishing pier at Heather Road and the beach.