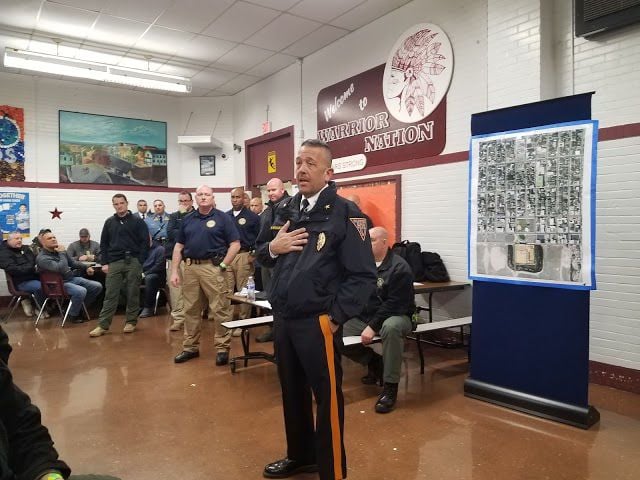 Wildwood Police Chief Regalbuto discusses preparations for President Donald Trump’s visit to Wildwood with local departments ahead of the rally. 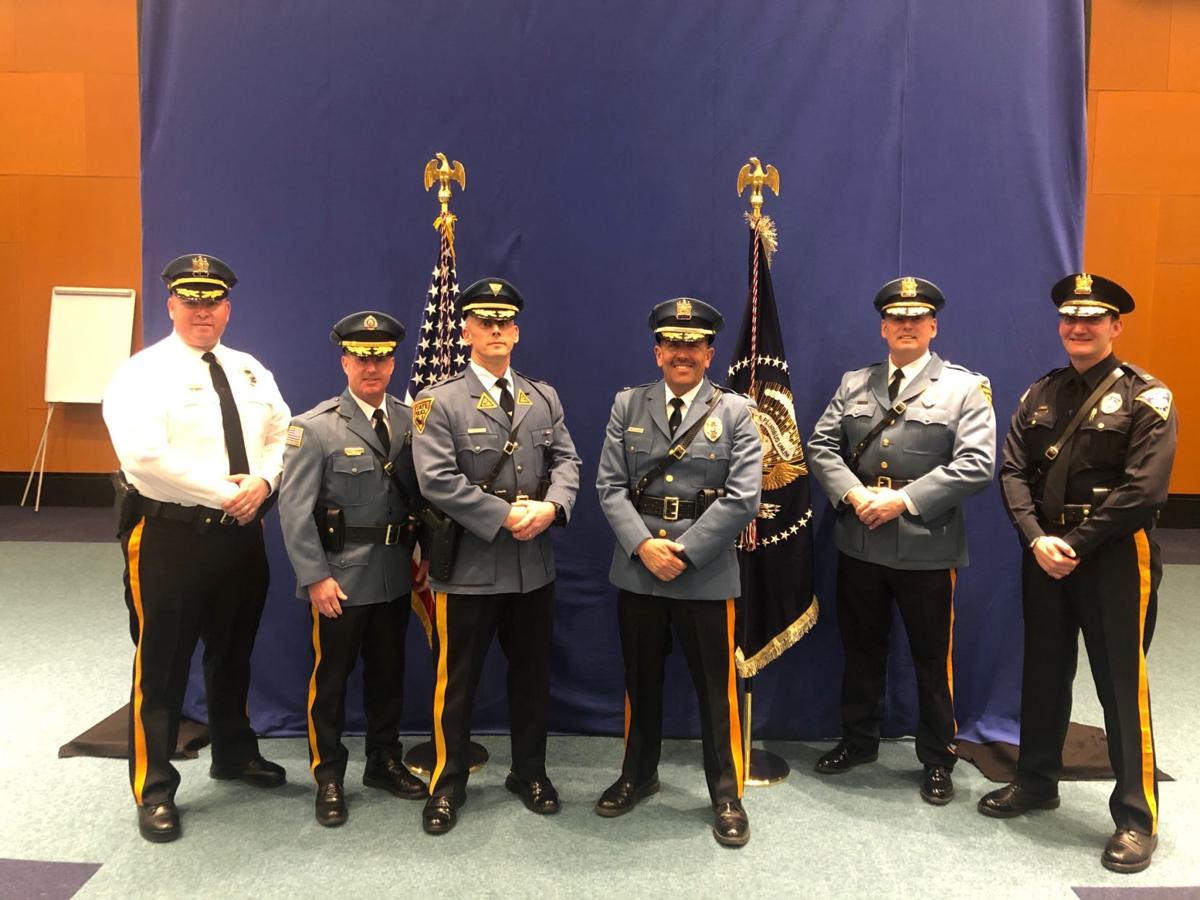 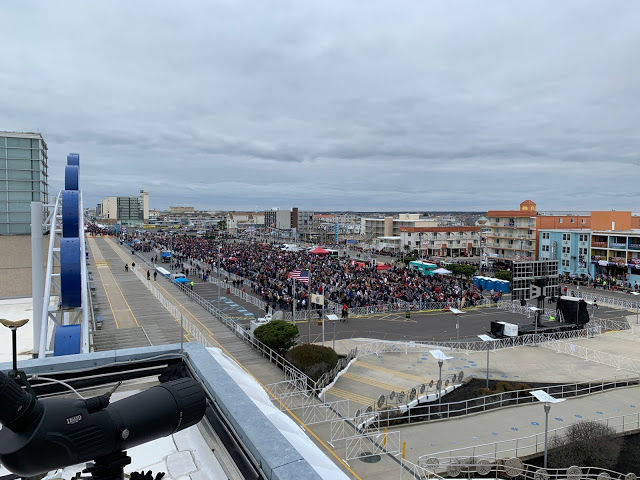 Wildwood police officers were stationed on the roof of the Wildwoods Convention Center for surveillance ahead of the rally.

WILDWOOD - Wildwood Police Chief Robert Regalbuto was given three weeks to prepare the winterized shore town, and somewhat of a skeleton force, for President Donald Trump’s visit Jan. 28. Normally one of the quietest months of the year, January had a new focus for Wildwood’s top cop.

“This was a once in a career opportunity for us. I was thrilled to be involved in it, I was thrilled it was successful and I’m even more thrilled that it’s over,” Regalbuto said, in an interview with the Herald.

Regalbuto heard that Trump’s campaign contacted the Wildwoods Convention Center Jan. 2, and that a contract had been forwarded, but not signed, to book the boardwalk venue as the host site for a Trump rally.

“I didn’t think it was going to be signed because I didn’t think the venue would be large enough for them,” Regalbuto said. The Convention Center holds about 7,400. “I was surprised to find out later (Jan. 6) that it was signed.”

The chief knew then that his workload would increase tenfold, but he’s used to that. He said he’s handled operations as large in scale, like the beach concerts by country stars Kenny Chesney and Tim McGraw.

“I was absolutely excited. The work doesn’t bother me. That’s one of the things that we enjoy doing is planning for events, and then having events come to town that are successful, like this was,” Regalbuto said. “We were absolutely thrilled to have that opportunity.”

Without much immediate direction from the Secret Service, Regalbuto started to prepare.

“There wasn’t as much that was confidential because we didn’t have a whole lot of communication with the Secret Service until about a week before,” said the chief. “Everything that we were doing, we were planning just for a large-scale attendance event.”

Secret Service’s practices didn’t surprise Regalbuto, but he was impressed in his dealings with them.

“They’re a remarkable organization. They’re very well organized,” Regalbuto said. “Each one of these agents was assigned to a specific task. A team was assigned to the site, another team to the motorcade, another to how they were arranging to get the president here on Air Force One and Marine One. Everyone had their own little assignments, which is strictly all they would do.”

One of the most secretive parts of the operation was the president’s travel, and a few different potential landing zones for his helicopter. Sunrise Park, in Wildwood Crest, was proposed and practiced, but the final decision bounced at least a dozen times between Cape May County Airport, in Erma, and the Byrne Community Center, in Wildwood, Regalbuto said.

“When you start landing three Ospreys and two Marine One helicopters in a football field, it gets a lot of people’s attention. It enhanced security risks for the Secret Service, and as the decision moved up the food chain within their ranks, it was finally decided to go to a more remote location,” Regalbuto explained, of the decision to chopper from Air Force One, which landed at the Atlantic City International Airport, to Cape May County Airport, and then use a motorcade to get to Wildwood, instead of flying directly into town. “They didn’t want anyone to know the plan for what they were going to do until it was done.”

Regalbuto said that the unique location of the Convention Center, bordered by the beach on three sides, made security easier.

“That was three sides that were easy to secure. We put some additional resources down there, of course. We illuminated the outer perimeter with portable generator lights, so we could see anybody who was down on the beach," said Regalbuto. "We had vehicles patrolling the beach on both the north and south sides, as well as a rover on the east side of the building.

"The U.S. Coast Guard had patrol boats in the water for any boat traffic that may be in the area. We had some additional support units from K9s who made sure there wasn’t anyone under the boardwalk."

More officers looked down from the Convention Center roof for signs of threats.

There is always the potential, with a large-scale event, and increased media attention and scrutiny that come with it, for a town to be viewed in a less than flattering light. Regalbuto took precautions to make sure that wasn’t the case in Wildwood.

He required all officers to summon a supervisor before making any arrests, and stressed de-escalating and separating conflicting parties without making arrests or issuing citations.

“I took that away from everybody, and only one of our supervisors would make the ultimate determination if there would be a physical arrest,” the chief said.

There was one arrest that night related to the Trump rally, when a disorderly person with a knife was taken into custody.

“I believe there was some alcohol involved with the gentleman,” Regalbuto said. “He did have the sheath, but there was no knife present. Then he returned, and he was in possession of the knife. He was still being disorderly, and now being armed with a large weapon, the officers felt, and the supervisor agreed, to take the gentleman into custody. We recovered the knife. We took that from him. That was lodged into our evidence as a weapon.”

For the most part, though, everything ran smoothly.

“The people who we dealt with, they were very supportive of law enforcement on both sides,” Regalbuto said.

Much has been made about a request by Mayor Pete Byron for departments to submit rally related expenses to him, so he can ask Republicans for reimbursement. Regalbuto said he doesn’t have those figures.

“I don't have the total financials yet. I have a breakdown of every officer who worked those days, and what their total hours were. For just uniformed officers, it’s around 350 hours, ballpark, so each officer has a different pay rate dependent upon their rank or years of service, so I’m waiting to get those numbers from our finance office, which I’ve yet to receive. I’m hoping to have that early next week, that way I can give it to the mayor.”

Rumors surfaced following Trump’s daughter-in-law Lara Trump’s comments on local radio that the president would return to the area because of the high-ticket request for his Wildwood rally.

“We did it this time, with very minimal issues. I’d love to have it again,” Regalbuto said. “How do you say no to the president of the U.S. coming to your municipality?”

Wildwood honored one resident for her work, leading clean-up efforts of trash and personal belongings left behind in the staging area after President Donald Trump’s rally Jan. 28.