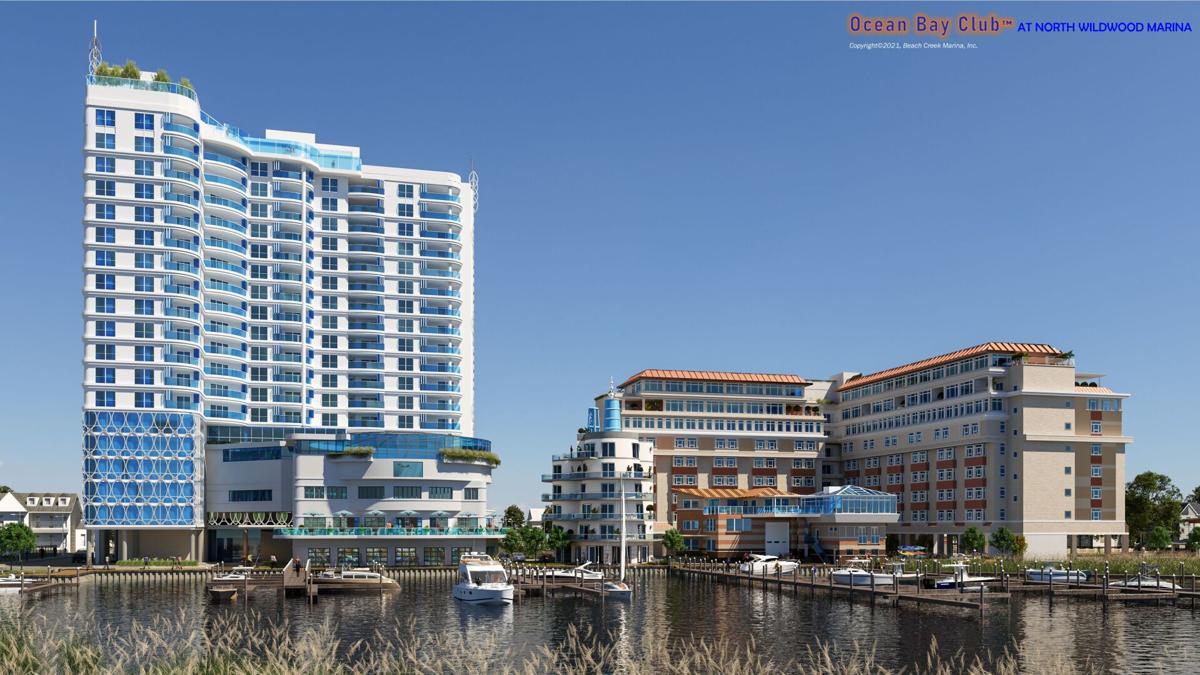 An artist’s rendering of the proposed Ocean Bay Spires, left, a nearly 200-foot luxury condo tower that was approved by the North Wildwood Planning Board. On the right, plans are shown for a renovation to Marina Bay Towers, which will be renovated and rebranded Ocean Bay Vistas, and will include affordable senior and market-rate units. 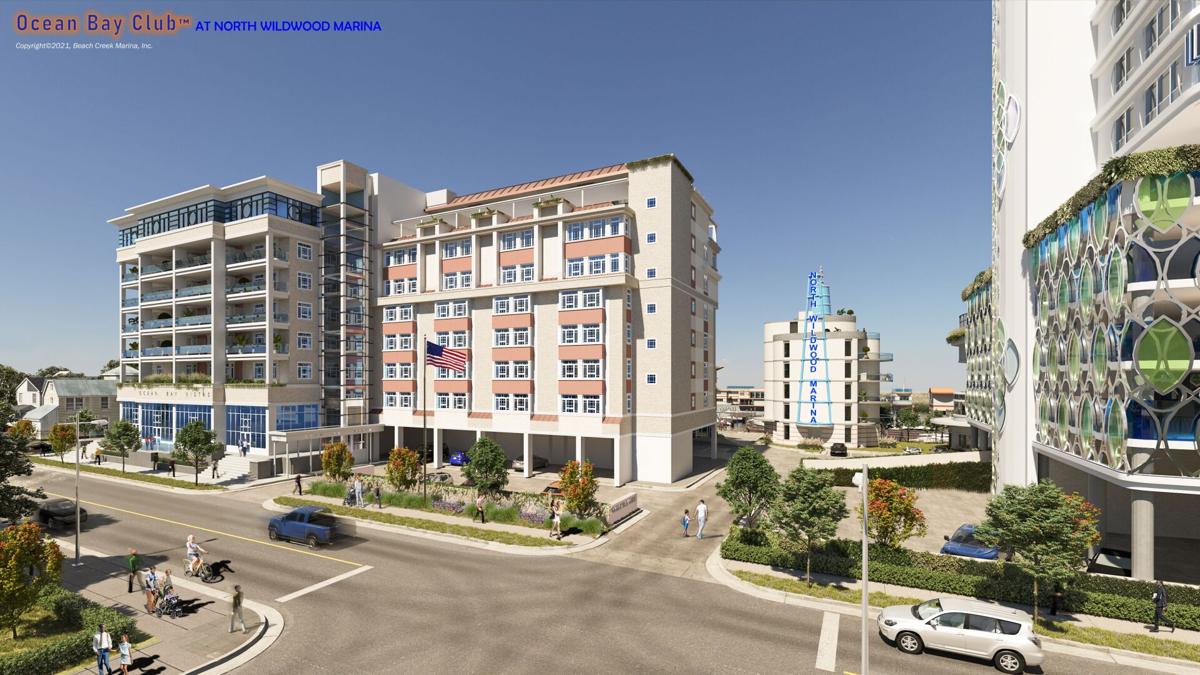 From the intersection of Sixth and New York avenues, an artist’s rendering shows how Marina Bay Towers will be renovated. The building will include 105 affordable senior units and other floors of market-rate units, and will be renamed Ocean Bay Vistas.

CORRECTION: The below story incorrectly identified the Marina Bay Towers owner. Marina Bay Towers was owned by Alliant Capital, but later withdrew from the building’s ownership. It’s now being held by a nonprofit owner-operator, awaiting the implementation of the court order for the renovation, according to developer Paul Cocoziello. Also, Alliant Capital is a privately held investment firm, not a publicly traded company.

NORTH WILDWOOD – Perhaps it was appropriate that, after 15 years of seemingly endless litigation, the developer of the Marina Bay Towers property finally got the rubber stamp on a new, high-rise, luxury condo tower and renovation of the existing towers in a courtroom.

After a presentation from developer Paul Cocoziello, the North Wildwood Planning Board unanimously approved renovations to Marina Bay Towers, a senior affordable housing property, and construction of a new, market-rate, high-rise building on an empty lot next door, in a lengthy meeting in the city’s municipal courtroom.

The Planning Board had little alternative but to approve the project because of the settlement, Mayor Patrick Rosenello said.

In the first phase of the project, Marina Bay Towers will be renovated and rebranded as Ocean Bay Vistas, according to a press release. An eighth story would be added. There will be 105 affordable units offered on the lower levels and 61 market-rate units sold on the upper floors.

The new, market-rate tower would have four stories of parking below 11 stories containing 144 residential units and will be built on an empty lot where boats are currently kept.

Two-story penthouses will occupy the top floor. Sixty of the units will be available to rent, like hotel rooms through a central management company, the release states. The building will be called Ocean Bay Spires.

For years, the conditions at Marina Bay Towers were deteriorating and angry tenants accused Cocoziello of doing little to improve them. Currently, less than 40 of the more than 140 total units are occupied.

He said he did not allow conditions to deteriorate to leverage construction of the new tower, referencing an opinion from Superior Court Judge Mark Sandson, who, in a 2018 decision, wrote: “This court has heard no evidence of any deliberate plan by the developer to scuttle the (Marina Bay) project.”

Cocoziello said the property’s history was the perfect storm.

“You couldn’t even make this up. Tax litigation to the Supreme Court, the storm of the century, Hurricane Sandy, and a publicly traded bank that did not honor their capital contribution payments to a project of low-income senior citizens. How can you possibly concoct that?” Cocoziello said, adding the troubles began when the city sought to tax the affordable housing property, even though it was subject to a tax abatement, where it would not be taxed as a regular property, based on value, but instead should be taxed on a percentage of gross income.

That was litigated to the state’s Supreme Court, where Cocoziello prevailed. He said one big misconception is that he owns Marina Bay Towers, when, in fact, they are owned 99.99% by a publicly traded company, Alliant Capital.

The courts agreed that Cocoziello is not an owner of the building. He said he owns the land and constructed the towers, but ground leased it to the public entity in a “turn-key” deal.

He also owns the site’s property management company but said he could not perform improvement work unless it was authorized by the building owner.

Rosenello said he hopes that the absence of affordable units in the new tower will force Cocoziello to maintain quality.

Cocoziello said he is in the process of obtaining Coastal Area Facility Review Act (CAFRA) permitting required for construction. The projects are estimated at $12 million for the renovation and $65 million for the new tower. He said he plans to announce funding soon.

Had the Planning Board not rubber-stamped the proposal, Cocoziello could have appealed to a judge, who likely would have sided with him, because most of the specifics were ironed out in the court settlement, said Rosenello.

A press release estimates completion dates for June 2022 for the old Marina Bay buildings, and June 2024 for the new tower.