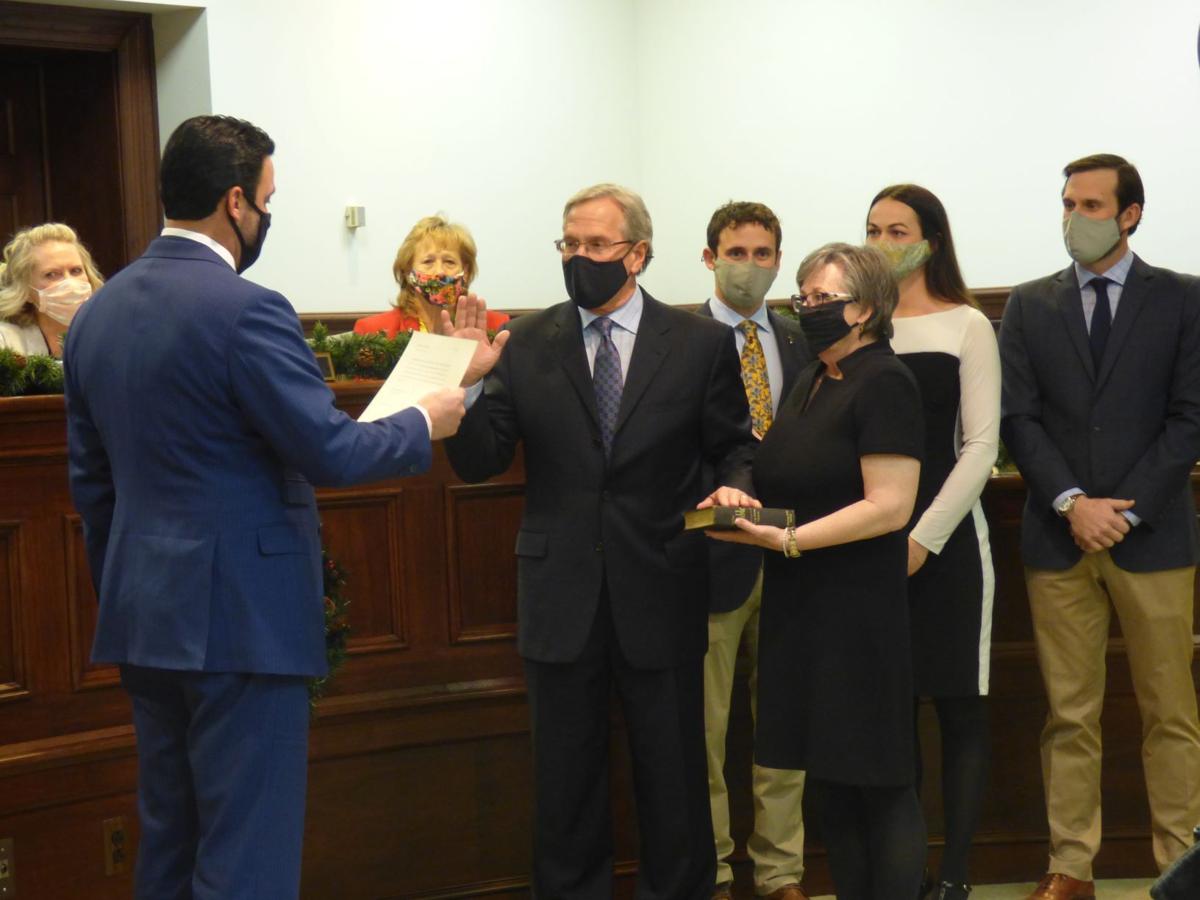 Commissioner Will Morey, with his hand on the Bible, is administered the oath of office by Sen. Michael Testa (R-1st), as his family looks on. 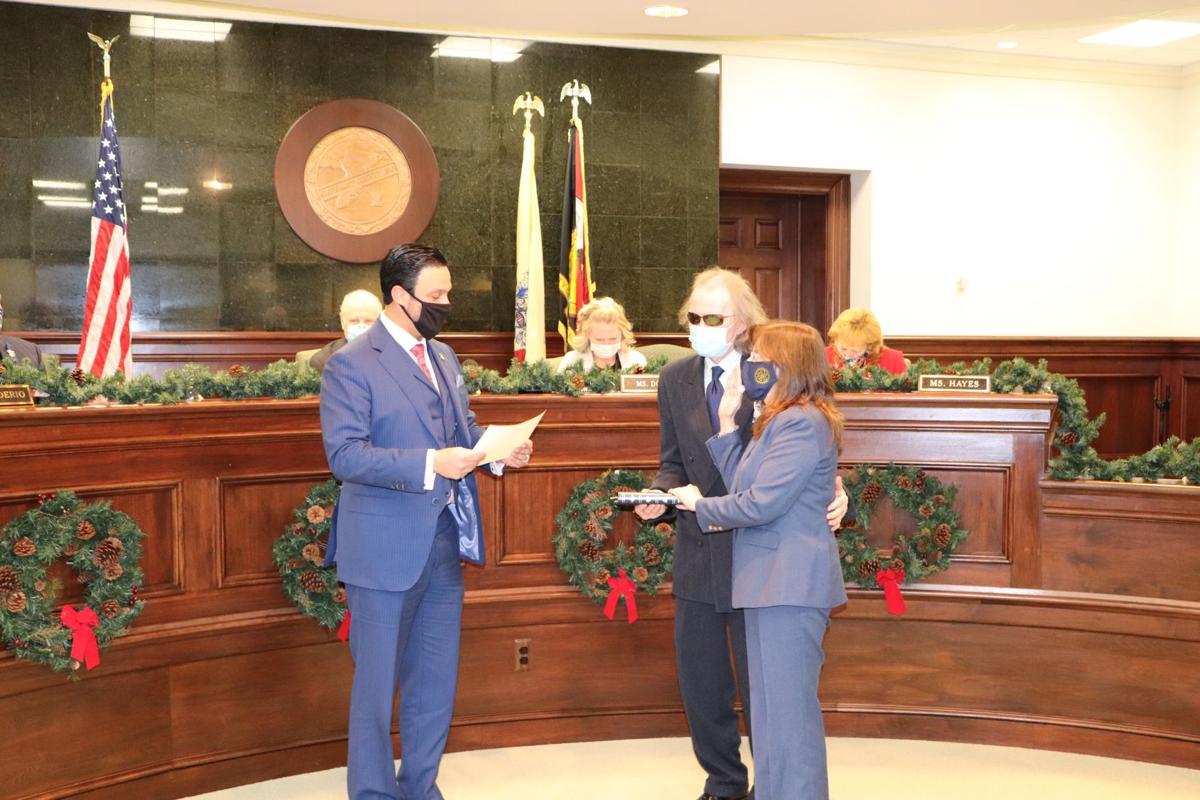 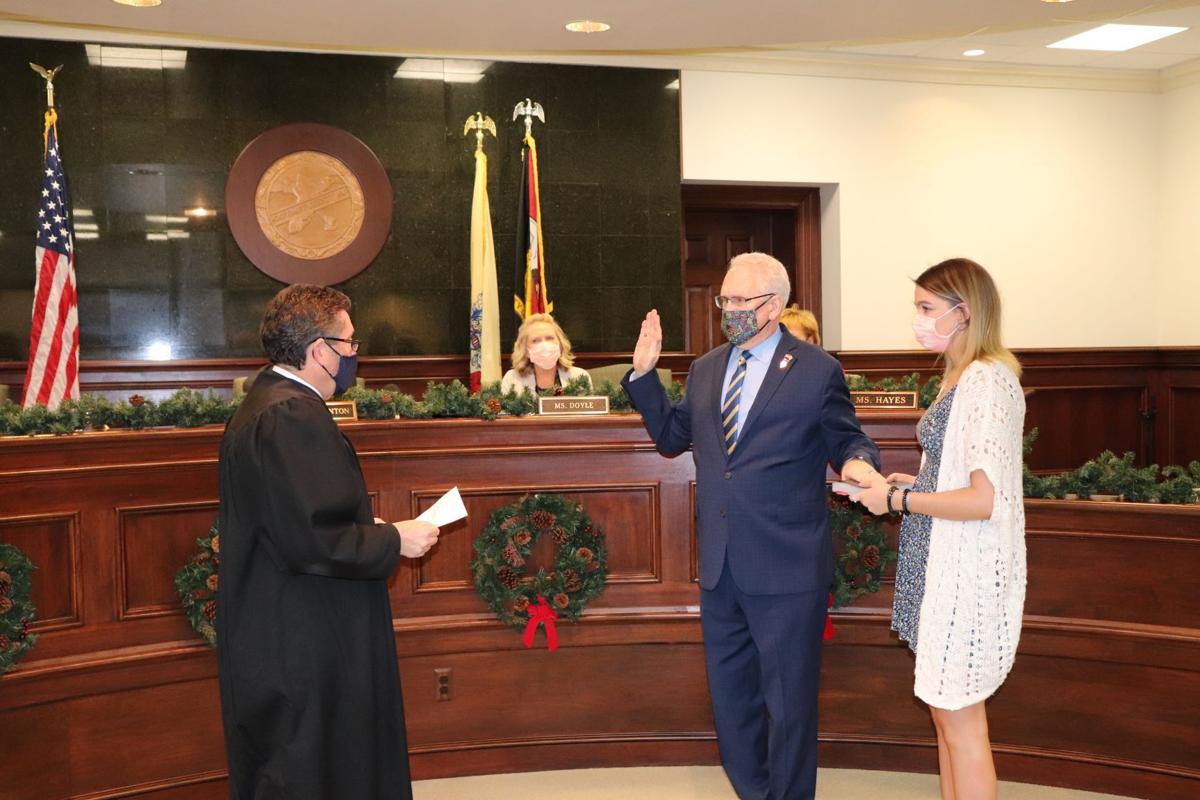 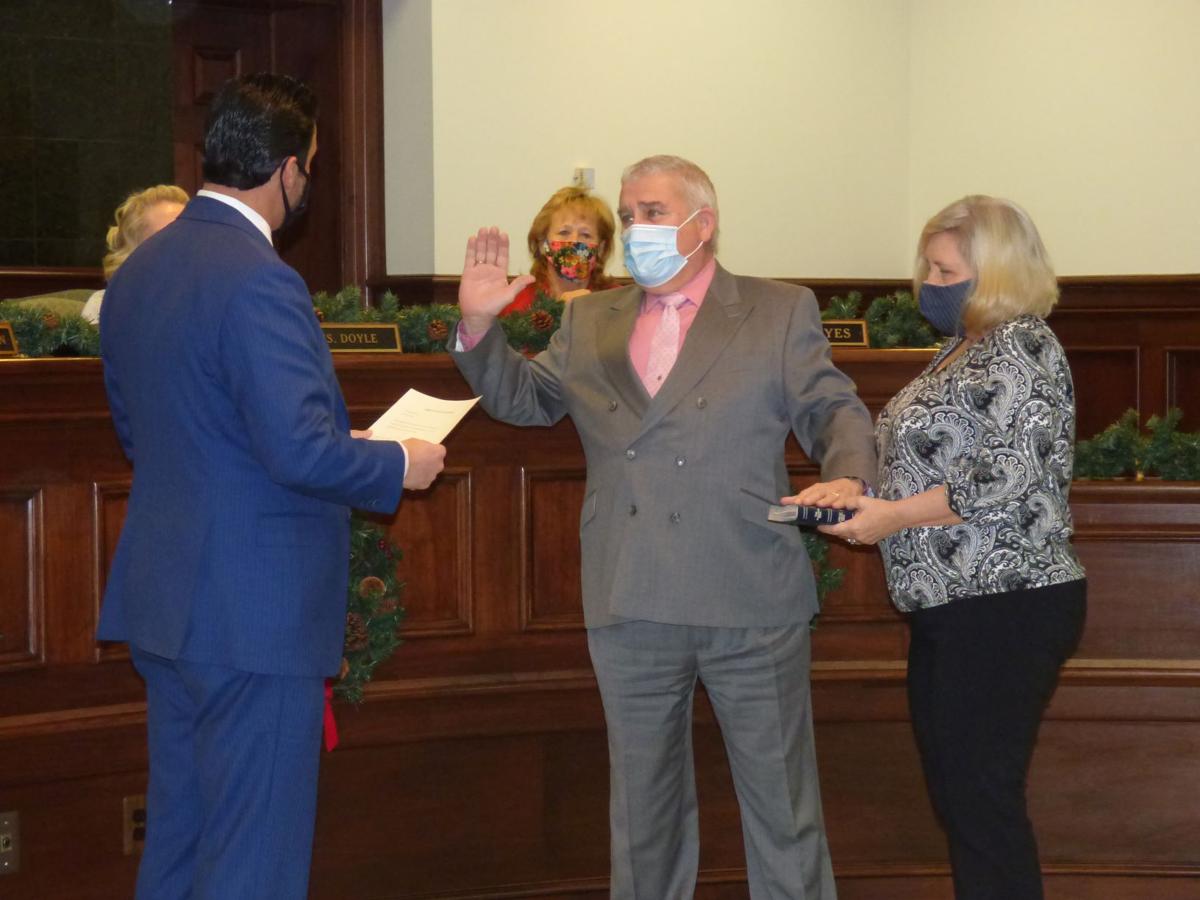 Sheriff Robert Nolan takes his oath of office from Sen. Michael Testa (R-1st), as his wife holds the Bible.

Commissioner Will Morey, with his hand on the Bible, is administered the oath of office by Sen. Michael Testa (R-1st), as his family looks on.

Sheriff Robert Nolan takes his oath of office from Sen. Michael Testa (R-1st), as his wife holds the Bible.

CREST HAVEN - A new yearand title change by state lawmeant the Cape May County Board of County Commissioners (freeholders since 1792) began 2021 with new designations Jan. 6.

Testa also administered the oaths of office to County Clerk Rita Rothberg, (formerly Fulginiti), and Sheriff Robert Nolan. Both Nolan and Rothberg were accompanied by their spouses.

Past reorganizations were filled with ceremonial pomp, with school children singing the national anthem, Sheriff's Color Guard, and clergy offering prayers. This year's reorganization had none of those additions.

While the board remains all Republican, when the time came for the selection of Commissioner Director Gerald M. Thornton, the year’s first resolution, Commissioners Morey and E. Marie Hayes abstained.

Thus, Thornton was returned to the post, which has a salary of $18,973, $1,000 higher than the others, by Vice Director Leonard Desiderio, Pierson, and Thornton.

The board was united on Desiderio's continued title of vice director.

On the third resolution, which appointed Kevin Lare as acting county administrator and acting clerk of the board, Morey, again, abstained.

He cited his abstention on a previous resolution (790-20) that approved Lare's appointment. At the time, Morey stated his concern was over the manner of the selection, and not with Lare or his qualifications to hold the post.

As the county's reorganization took place, there was a riot at the U.S. Capitol, as the House and Senate were preparing to finalize the Electoral College tally, making President-elect JoeBiden the nation's next chief executive.

As Thornton congratulated Morey and Pierson on their reelection, Thornton said, "I think it's really important we recognize the importance of elections, and the integrity of elections. What we are seeing going on now, throughout this nation, frightens me. It scares me to death to think the way things are going, and I'm not talking Democrats or Republicans, I'm just talking about the integrity of our election process."

Citing his service on the county Board of Elections, where everything is done under the watchful eyes of a Democrat and Republican, down to opening the door in the morning and overseeing the election returns, Thornton continued, "What's happening today in this nation isshameful."

He mentioned the counting of absentee ballots "and everything else that have these discrepancies throughout the states and towns, believe me, it's shocking to me."

Thornton thanked former acting Administrator Michael Donohue "who has done an outstanding job," he said, and who served for seven months, during the Covid pandemic that affected many of the county offices.

Further, Thornton lauded his board peers for the seven-day-a-week job they have done throughout the pandemic, and for the county employees.

Each commissioner was assigned departments for the year:

Meetings of the commissioners will follow the same schedule as previous years, the second and fourth Tuesdays, at 4 Moore Rd., Court House.

Each meeting has an earlier caucus, which the public may attend, but there is no public input at those sessions. There is public comment permitted at the regular sessions. The caucuses for the secondTuesdays are at 5:30 p.m., while those on the fourth Tuesday are held at 3 p.m.

When meetings are held via the internet, the public can listen and comment via the link on the county government website: http://bit.ly/3hWaTAy.