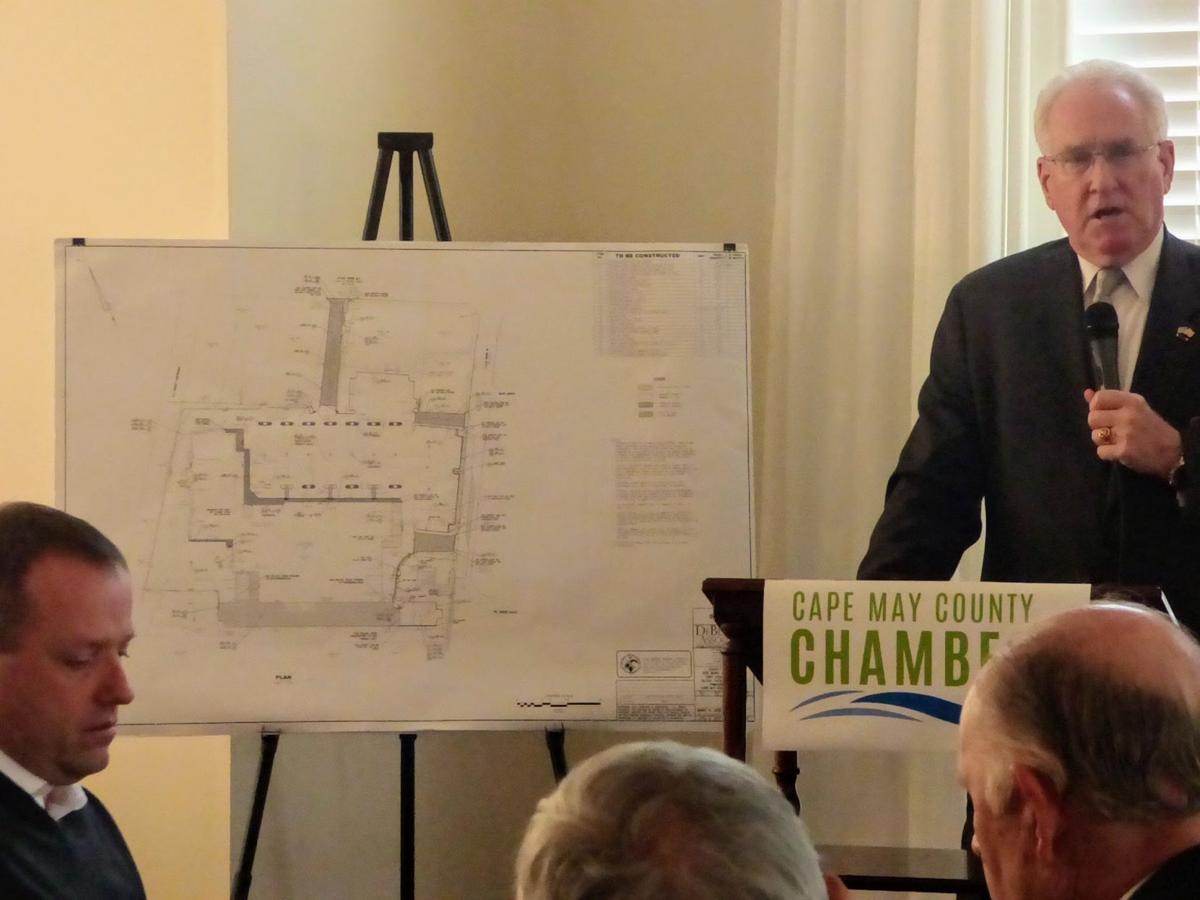 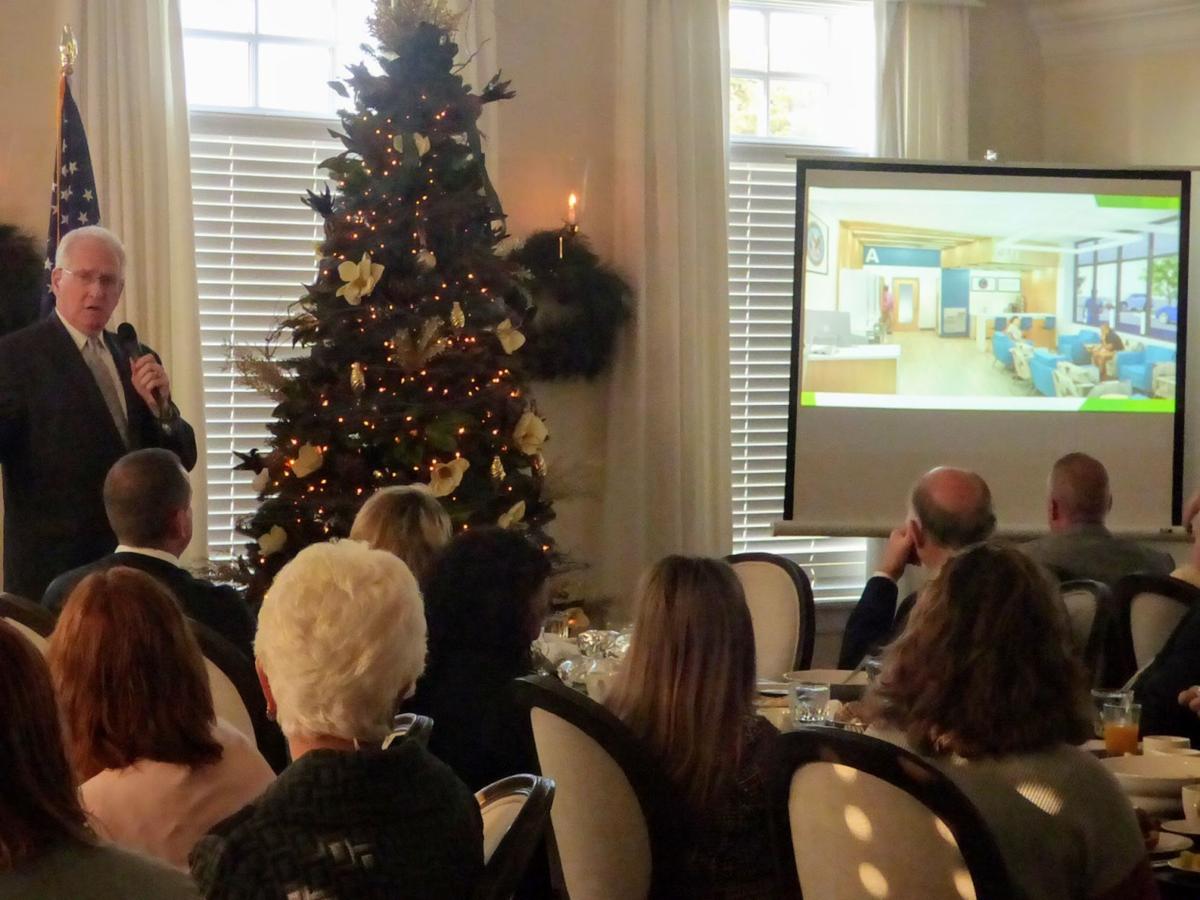 Freeholder Jeffrey Pierson shows an artist’s rendering of the inside of the veterans’ clinic at the Nov. 21 Cape May County Chamber of Commerce meeting. The clinic is expected to open in April 2020.

COURT HOUSE – Freeholder Jeffrey Pierson updated the Cape May County Chamber of Commerce on “our biggest project in the last two years” at its Nov. 21 meeting at Stone Harbor Golf Club. Pierson was referring to County Commons in Rio Grande.

He said that a study was started two years ago, to look at relocating county Social Services. Rent at the current facility, located on Route 9, in Rio Grande, costs about $660,000 per year, according to Pierson.

“They’re eating us alive,” said Pierson. “Throw all the employees in there, and everything else, it really cost a lot of money to survive in that building, so Freeholder Director (Gerald) Thornton wanted us to find a better location.”

That location was the former Kmart, which closed several years ago. Pierson said the county planned to ask for a lease purchase up to $7 million, when it was discovered that the previous owner of the property went bankrupt.

“They put it up for bid,” said Pierson. “We got the building for $5.5 million; lower than what we were going to offer.”

He said that the building was assessed at $10.6 million. “We’re going to sink about $4.5 million into this, so you put it all together, we’re still basically under the assessed value of the property for all this work that we’re going to put into it,” Pierson added.

Pierson, who referred to the facility as “one-stop shopping,” named the tenants, including Tractor Supply, which plans to be operational by Dec. 31. “I think that’s a little bit hasty,” said Pierson. He predicted a January opening.

Next to Tractor Supply is the veterans’ clinic, which is currently located at Coast Guard Training Center Cape May. Pierson noted that it’s “hard to get on there. You have to go through the process of showing an ID, getting a pass, etc., to get in there.”

Pierson said that the double-wide facility is almost 50 years old, and something needed to be done.

“Once you’re in the facility, it’s not much bigger than this room put together,” he added. The new clinic will have a 10,000-square-foot-plus area for veterans.

“They (veterans) can go there, and they can get some of their medical services, diagnoses, and meet with doctors, and specialists,” said Pierson. “There’ll be rooms there they can meet in, and have discussions with other people. They’ll be bringing a group of veterans, and if they want to have a little event there, they’ll be able to do all that.”

The clinic is expected to be operational by April 2020.

The county Department of Human Services will be located next to the veterans’ clinic. Pierson noted that two existing tenants, Rent-A-Center and Game of Cones, will also be part of the facility for now. “We hope to replace them later on, as things go down,” he said.

To the far right of the facility is the movie theater, which will be operated by Stone Harbor Theater LLC, which owns Harbor Square Theater in Stone Harbor. The theater will have three small theaters and one large theater (IMAX), according to Pierson.

The venue will also include a bowling alley, arcade, restaurant with a bar, and beer garden. He said there will be an outside area for patrons to sit and enjoy their libations during nice weather.

The backside of the building will house One-Stop Career Center, a state agency, along with the rear entrance to county Social Services, and a storage area for the county. Pierson said the county planned to move its services into the building by Aug. 31, 2020.

Pierson noted that all purchases and renovations are within the assessed value of the property. He estimated that renters, in 10-15 years, would pay off the county’s debt. “No longer will we be paying $660,000 a year for the rental where we had the other place,” he continued.

“We’re adding more business to the community,” he said. He estimated that 50-70 new employees would be added to the property.

Pierson mentioned the county is improving the parking areas, lighting, and traffic control, saying, “We cleaned up one of the biggest eyesores in Rio Grande.”

Vicki Clark, president, Cape May County Chamber of Commerce, highlighted S109 and A3101, during her report.

S109 “is a bill that limits your ability as a business to control your scheduling,” said Clark.

“This bill says you have to post a two-week schedule, and you have to pay people for the hours you posted that schedule for, regardless of whether you call them into work,” she continued.

Clark added that the chamber would be “working to lobby against the bill when it comes up for a floor vote.”

A3101 increases the amount of funding to promote tourism, arts, and culture in New Jersey, according to Clark. The bill was passed by the Assembly Nov. 25, 74-0.

“Kudos to many people around the state, especially in the arts community, who have worked very hard to get this bill passed,” said Clark.