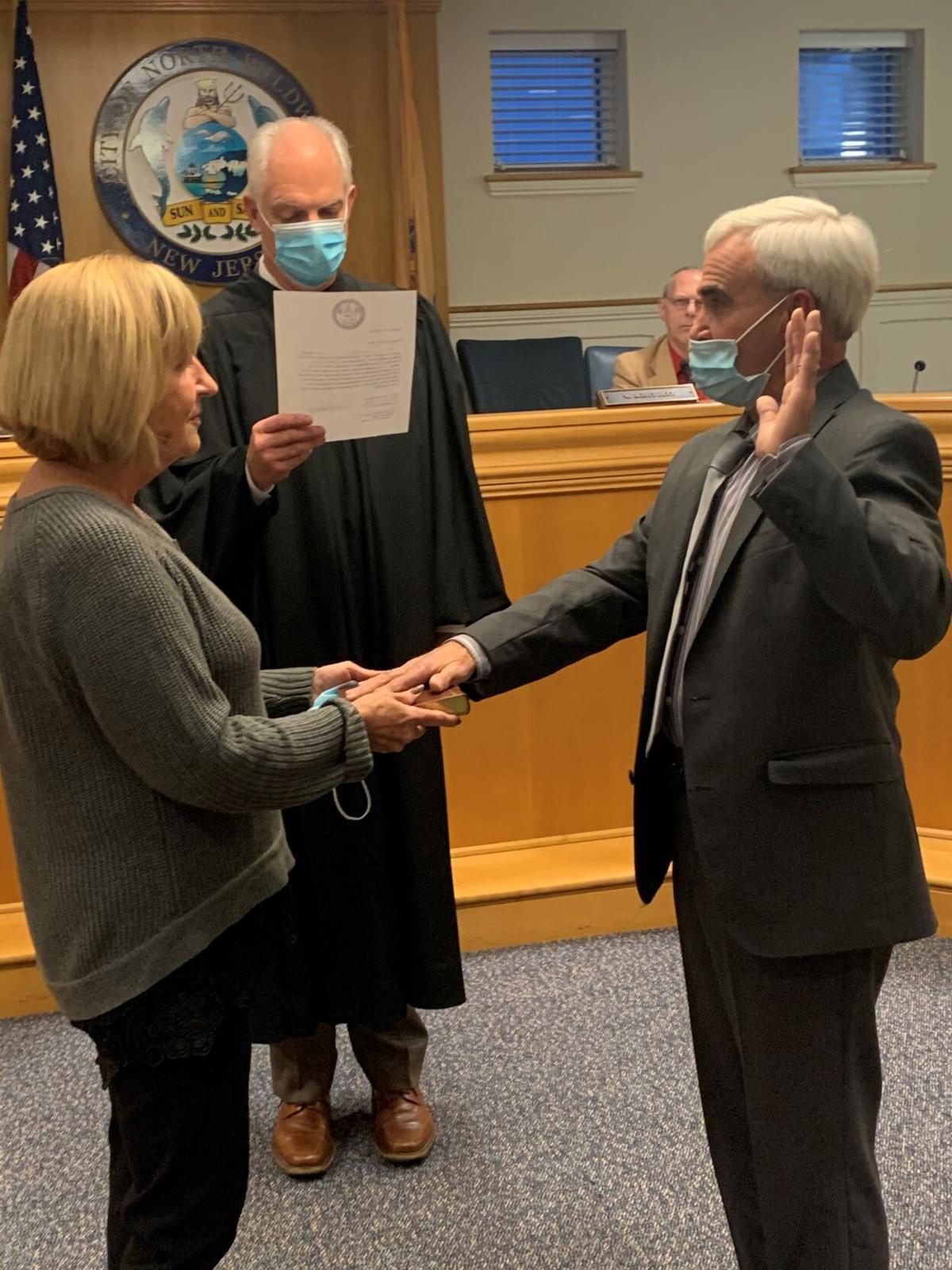 Councilman David Del Conte takes the oath of office from Judge Louis Belasco Jr., while Del Conte’s wife, Kathleen, holds the Bible. Del Conte ran unopposed in the 1st Ward and has been on council since 2011. 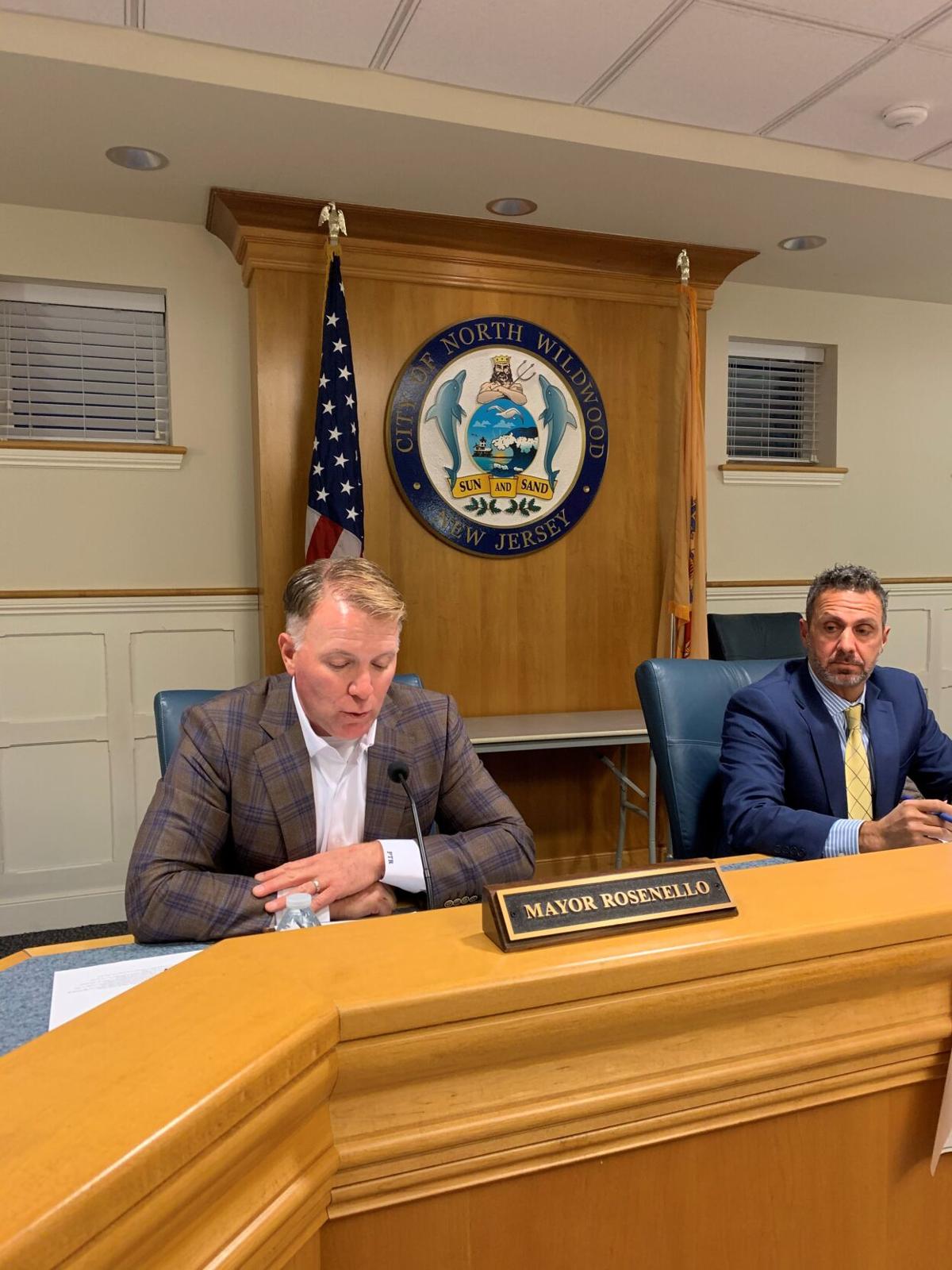 NORTH WILDWOOD – Continuity was the theme in North Wildwood City Council chambers Jan. 5, as the annual reorganization meeting featured many of the same faces.

Councilman David Del Conte and Councilwoman Kellyann Tolomeo took their oaths of office from Municipal Judge Louis Belasco Jr. and were sworn in for another term. Both ran unopposed.

“I’m kind of shocked that nobody ever runs,” Tolomeo said, in an interview. “The people are happy with the way the government is running here.”

Del Conte, a retired UPS driver, served the city’s 1st Ward since 2011. Tolomeo has represented the 2nd Ward since 2007.

“This past year proved how fortunate we are in North Wildwood to have our city council,” said Mayor Patrick Rosenello. “We did some things on the fly regarding Covid and lockdowns, and the bars and restaurants, the beaches and the boardwalk, that most people probably don’t do in their entire governing career. It was only because the city council was on board.”

Del Conte said, in an interview, “It’s probably close” between him and Rosenello, as to who knows more people in the town.

He said the focus in his next term would be on some various street projects in the city, and the beach replenishment project, “which seems never-ending.” He’s seen that beach erode over the years.

“Years ago, when we used to go to the beach, the beach was big there,” he recalled, where a bulkhead protects the rising tide from the north end of John F. Kennedy Beach Drive and the buildings on it. “Thank God we built the bulkhead there.”

The bulkhead is one of the points of contention in a dispute between the city and the state Department of Environmental Protection (DEP), who cited North Wildwood for environmental violations, in June.

Tolomeo, who is also the chair of the city’s Public Safety Committee, said she most enjoys getting out and talking to the people and hearing different opinions on things. She is active in the city’s recreation activities and said she enjoys working with children.

After all were sworn, the council voted unanimously for Sal Zampirri Sr. to remain council president.

“The motion carries. Sal gets his gavel back,” said Rosenello before turning the meeting over to Zampirri.

“He’s good. Sal does a great job,” said Del Conte, who met Zampirri delivering UPS packages to him and his mother when he was a child growing up, in North Wildwood.

“Sal’s a very calm person, very relaxed. The mayor is, too,” Tolomeo said. “I’ve been working with them for a few years. I’ve never seen either one of them show any anger.”

The only substantive change at the meeting was when the council approved Michael Donohue as the new city solicitor (http://bit.ly/3pY7ior). William Kaufmann was city solicitor for 20 years and will stay on as special counsel.

“It's very unusual to get a retired Superior Court judge, so we are extremely lucky here, in North Wildwood, to get not only his years of experience at the municipal solicitor level - which he has a ton of - but also his insight as a Superior Court judge,” Rosenello said of Donohue.

“It’s something, well, you can’t buy it, but we’re trying to buy it. Forget I said that in next year’s contract negotiations, too,” he added.

Rosenello remarked on the past year and the challenges ahead.

“One of the things I realized is that one of the biggest gifts I have had as mayor is the city council who I work with being very supportive and engaged and informed of what is going on and understanding what we have to do to move things forward in North Wildwood,” Rosenello said.

Council members also expressed appreciation for Rosenello, who was elected to the council in 2004, and then mayor, in 2014.

“He brings the young in,” Tolomeo said. “This is a senior citizen town. Most kids grow up here, graduate, and move elsewhere… He gives them an incentive to stay, so yes, I’m very happy with Patrick (Rosenello). Extremely happy with him.”

Rosenello credited the city’s departments for their resiliency through the pandemic.

“The stuff they had to go through was unbelievable,” he said. “Every single department had to reinvent how they were doing business on the fly.”

Rosenello touched on the litigation between the DEP and the city, calling it a “public charade” and pointing to projects they worked on together while trying to resolve the violation notices.

He said an annual project to truck 300,000 cubic yards of sand from the beaches, in Wildwood, is about to begin, seawall repairs, in Anglesea, are wrapping up, the seawall is being extended from 3rd to 7th streets, and construction of the pump station is scheduled to begin this year, all of which are projects involving the DEP or Army Corps of Engineers.

"God saved a few extra nuggets for us, like trying to take our beach away while we were trying to fight him, and he’s winning right now,” Rosenello said, adding of the project: “It is absolutely paramount.”

“It’s the cost of doing business here,” the mayor added.

“Sometimes, you have to go through a rough patch to get out onto the other side and get things moving again. I feel that’s where we are at this point,” Rosenello said, of the city’s relationship with the state environmental agency.