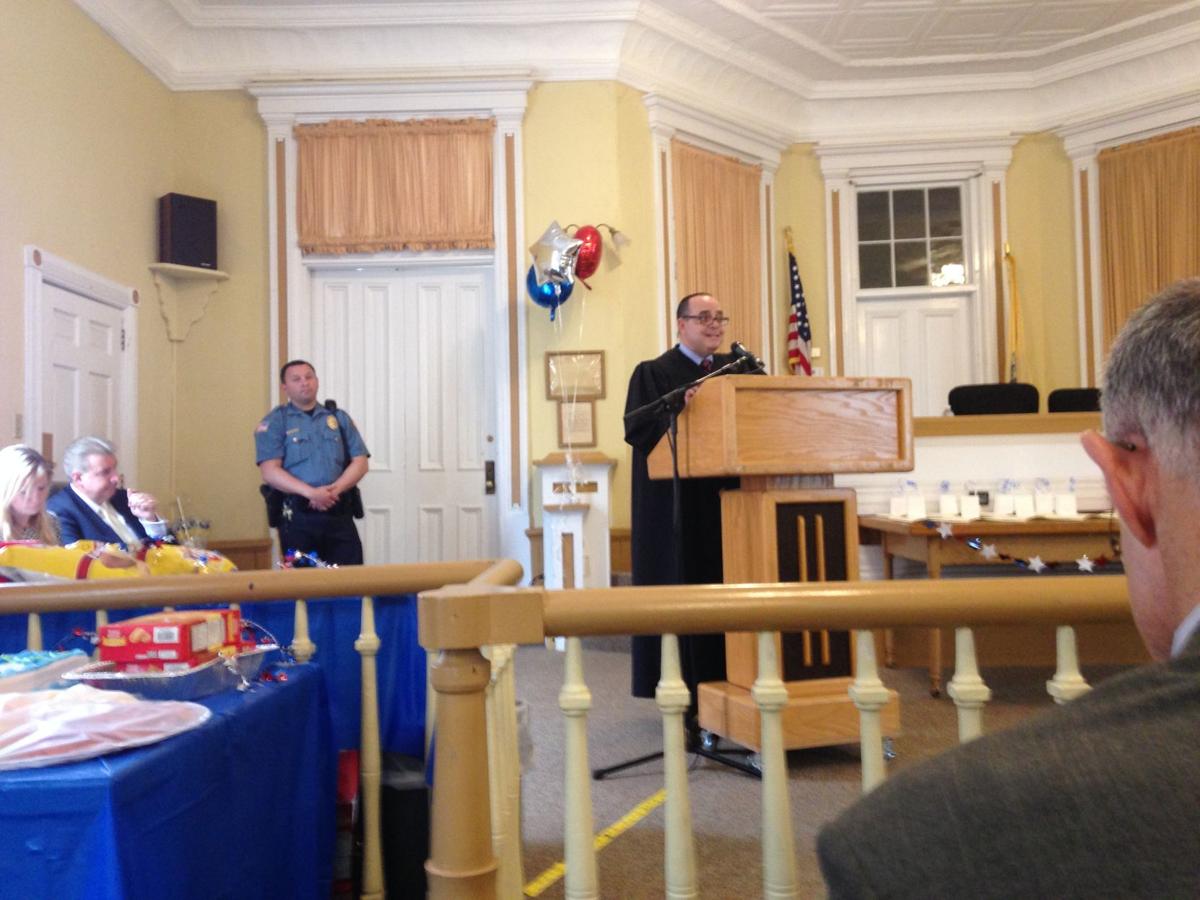 Judge John Porto recognizes Superior Court Judge Michael Connor for “All that you have done to make Drug Court a success.” 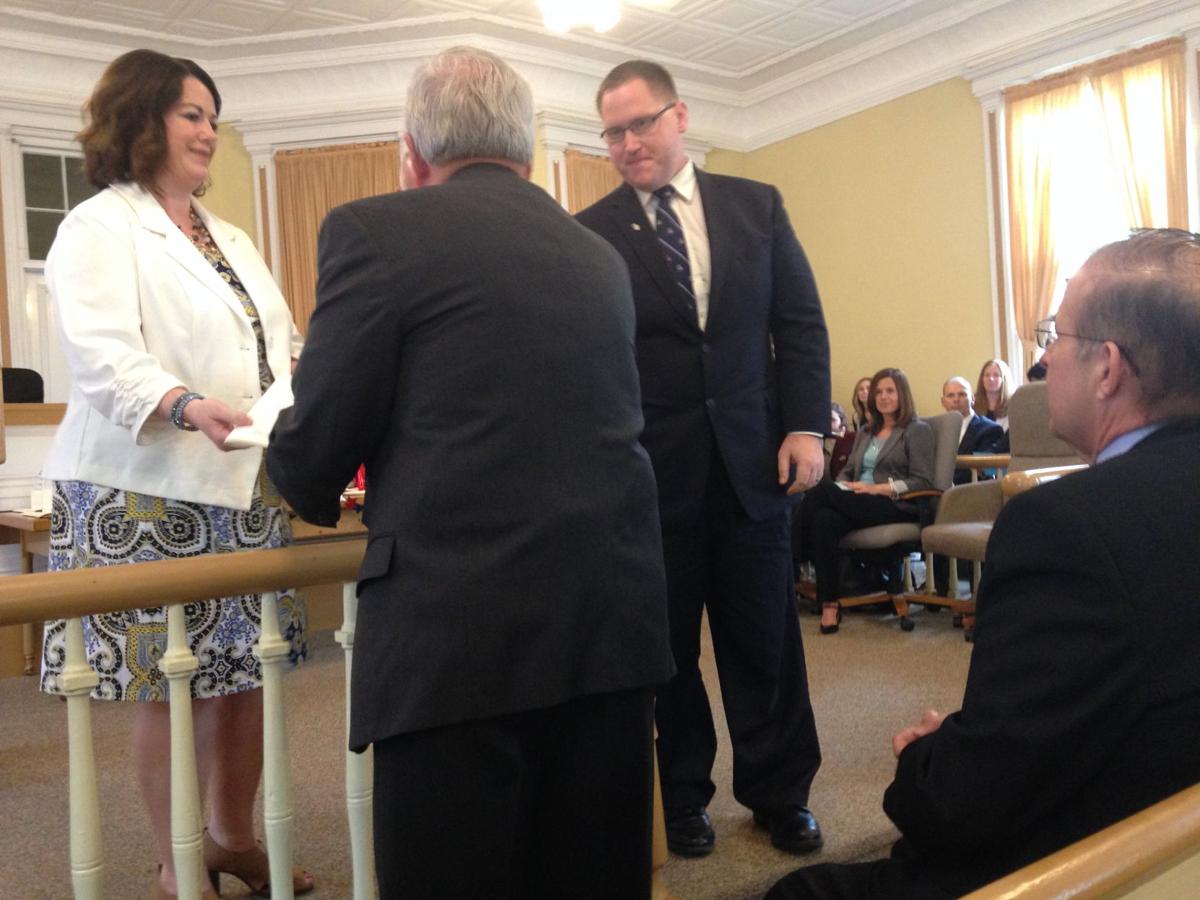 Superior Court Judge Michael Connor, back to the camera, and Assemblyman Robert Andrzejczak (D-1st) congratulate graduate from Drug Court May 17.

Judge John Porto recognizes Superior Court Judge Michael Connor for “All that you have done to make Drug Court a success.”

Superior Court Judge Michael Connor, back to the camera, and Assemblyman Robert Andrzejczak (D-1st) congratulate graduate from Drug Court May 17.

COURT HOUSE – Twenty beneficiaries of the Drug Court process celebrated May 17 at the Historic Courthouse the steps being taken to reclaim their lives and renounce former drug or alcohol addictions.

To help commemorate their achievements members of the county's judiciary, elected officials and members of the Drug Court team, including probation officers, counselors, and other support personnel attended.

The county's Drug Court program is a highly specialized team process within the existing Superior Court structure that relies upon a collaborative relationship between criminal justice officials and drug treatment professionals. They assist non-violent drug offenders in rehabilitation.

Drug court programs are rigorous, requiring completion of four phases during five years of intensive drug and alcohol treatment and testing. The program supports the recovery process but also allows supervisors to react swiftly to impose appropriate therapeutic sanctions or to reinstate criminal proceedings when participants do not comply with the program.

Cape May County's Drug Court program, which also encompasses Atlantic County, started in 2002 and has grown to help hundreds of potential and actual felons and other drug defendants break the cycle of addiction, crime, and jail time.

This year was the program’s 15th graduation ceremony for those who have completed all phases and steps of the process to rehabilitation. The Drug Court group, needing to choose a name to call itself when it was first formed, selected as its team moniker "Lifesavers." That stemmed from participants' testimonials, and that is what it is.

During the ceremony, Superior Court Judge Michael Connor was lauded by judicial colleagues and drug court participants, no longer considered "defendants," whom he had helped to turn around their lives and is retiring after 37 years on various judicial benches.

"Judge Connor is someone I highly respect; he gave me back my life. I'm now a truly productive member of society.  I thought I had a life, but all I had was a life of addiction that only led to what he calls the only outcomes: jail, institutions, or death, " said one drug court graduate only identified by her first name.

Another emotionally recalled, "I was so resistant to what Judge Connor and others in the Drug Court program were trying to show me. He is honest and also disciplined and in touch. He sentenced me to 30 days in an Atlantic County jail because I just wasn't getting it. That made such a difference to my new life, one that I could never have imagined. I graduated from college being on the dean's list, am engaged and have a wonderful son who has a sober mother."

"You don't have to ride the garbage truck all the way to the dump, like an iceberg beneath the surface, there are individuals who are committed, caring and expert in getting you out of addiction," said Connor. "That is what I told those addicts appearing in my court and that there really are only three things that you need to be successful in drug court: show up, try, and be honest."

Assemblymen Robert Andrzejczak and Bruce Land (both D-1st) were present to give Connor a citation for distinguished service, and he was also recognized by his successor Judge John Porto for “All that you have done to make Drug Court a success.”

As keynote speaker, Michael Williams, founder of Minor Adjustments, Inc., gave impassioned remarks, "You have value, your life is at stake if you don't turn from your addictions and join us on the other side." Williams, born in Atlantic City, described how he hit rock bottom in Bridgeton in 2009 as a crack cocaine addict and dealer, and was in and out of jail for 20 years.

That rock bottom day found him eating out of dumpsters and shunned by most of his family. Williams recounted that he relied on his mother, a couple of friends and the nearest rehab center to help him.

"Now those people still help me, but I am able to help others. The 'friends' who I used to do heroin with, commit crimes with, they're coming to me now to turn their lives around. Making minor adjustments is key. And we now need to reach out to students as young as grade school and middle school students because that is where our addiction problem is starting."