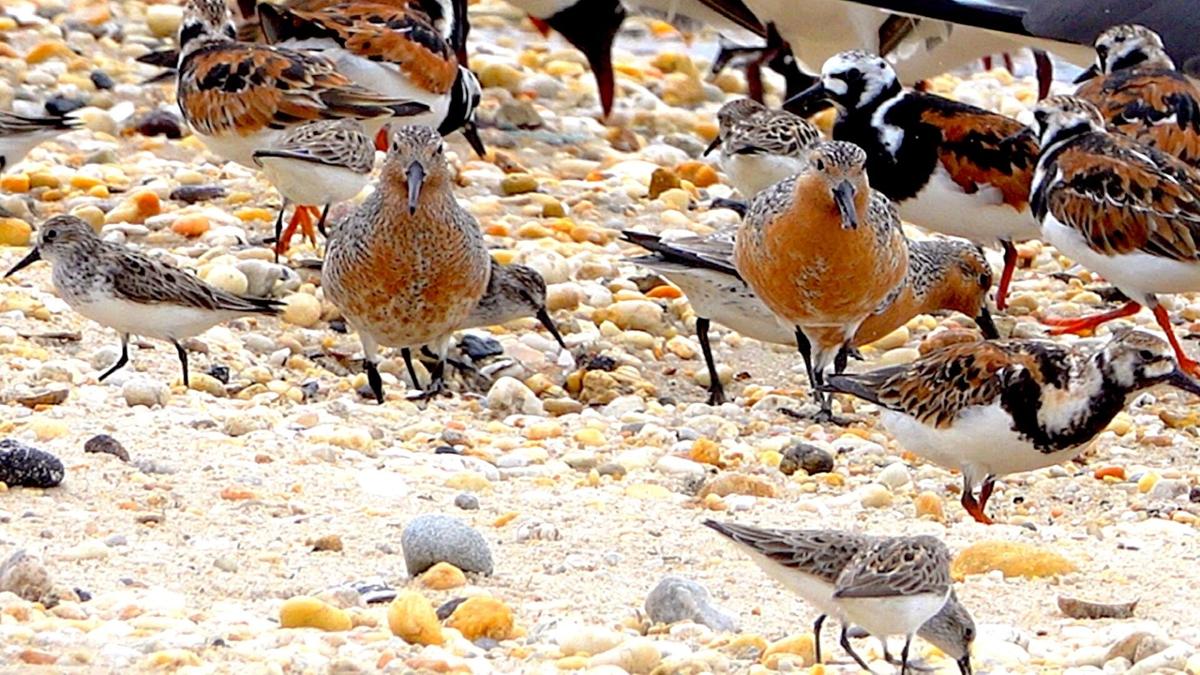 The red knots are migrating south, and researchers will be trapping them to collect data, including blood samples, which will help indicate whether they were able to breed this spring/summer in the Arctic. 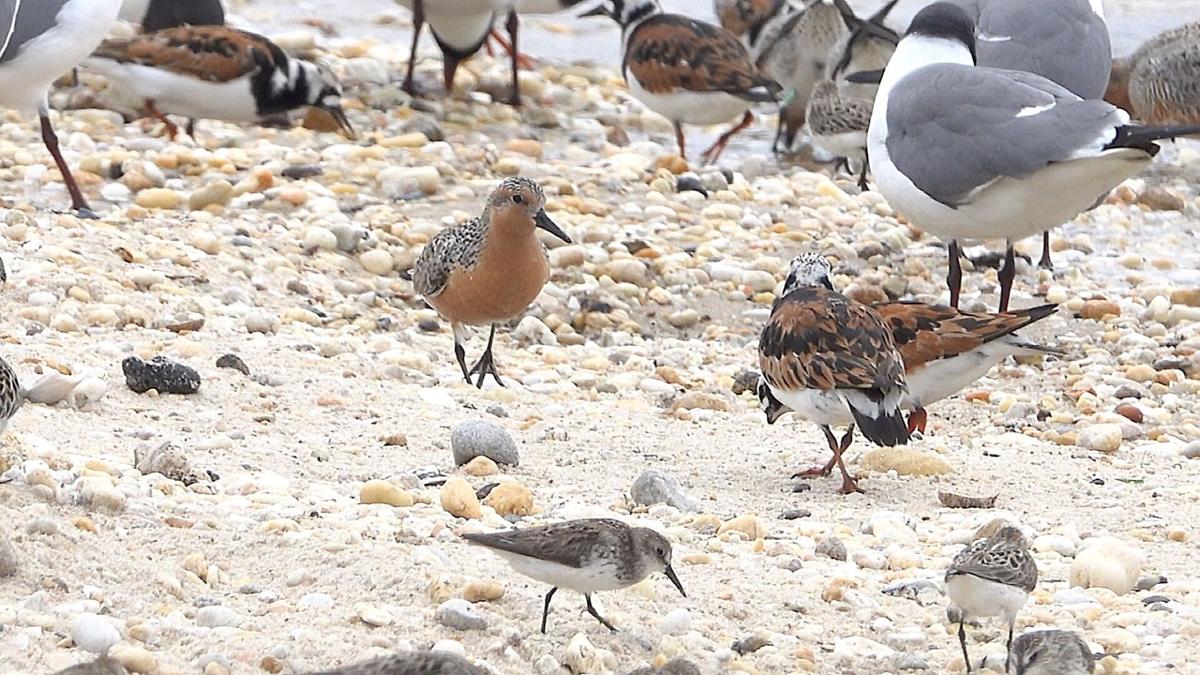 A blood test identifies if a red knot is a male or female. This information helps researchers determine breeding trends. Typically, females start southbound first, followed by the males and then the young. Migration typically runs through mid-September. 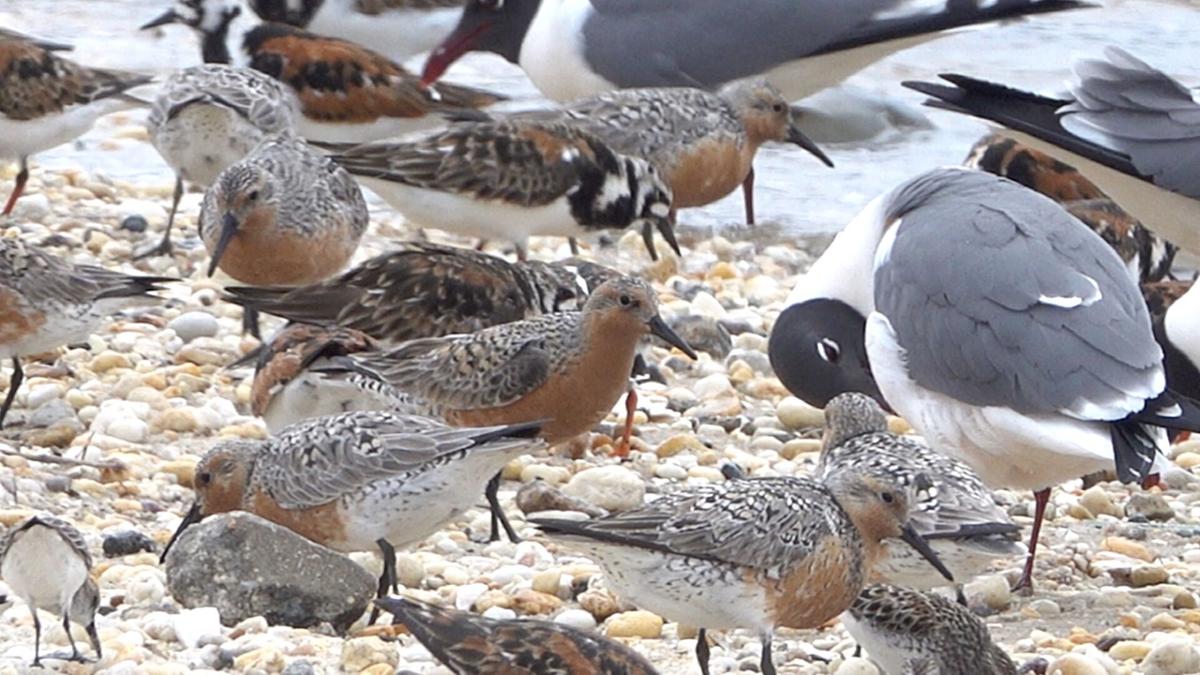 The numbers of red knots migrating north to the Arctic this spring were off compared to other years, according to researchers. The birds rely on horseshoe crab eggs, which spawned later this year due to cooler Delaware Bay waters.

STONE HARBOR - Wildlife biologists and researchers are watching the skies for the southbound flight of the state-endangered red knots, and will be collecting data on those that stop in the area before the birds head to the southern tip of South America for the spring and summer.

According to Larry Niles, Ph.D., the wildlife biologist who heads the local team, they started photographing the birds in flight during the week of Aug. 3, and will put satellite transmitters on them over the next several weeks to gather data on survival rates and how the installation of the wind turbines off the shore of Atlantic City may impact the shorebird.

The red knots travel northbound, from Chile to the Arctic, where they breed, stopping along the Delaware Bay to refuel on horseshoe crab eggs, in May and June. The migration is driven by “evolutionary forces” that, according to Niles, drive large flocks to stop for the eggs, which provide fat and protein needed for the trip north.

The return trip is shaped by genders if the birds breed, providing researchers with indicators of how healthy the species is and its food chain along the way.

The numbers of red knots and horseshoe crabs are important, according to Niles, because they are indicative of the health of the ecosystem, which, in turn, generates business revenue and jobs for commercial fishers, sport fishing, wildlife watching, and other ecotourism-related businesses.

“As I originally thought, numbers this spring were off,” Niles said. “About 20,000 red knots came through the Delaware Bay area, and about 6,000 stayed long enough to benefit from the horseshoe crab eggs. The crab spawn was delayed this year because of the cold water.”

Horseshoe crabs need the water to be about 59 degrees Fahrenheit for a successful spawn. This spring, the water hovered in the low to mid-50s during the migratory period.

The Delaware Bay is the last stop before the birds head to the Arctic, and this year, Niles, of Wildlife Restoration Partnerships (WRP), said COVID-19 impacted the number of researchers who could study the birds and their breeding.

Many local organizations stopped volunteer crab tagging events that supplement the biologists’ work because of COVID-19 and the number of biologists was less, so fewer places along the migration path were studied.

Breeding in the Arctic

Once at the Arctic, the birds tend to find areas to breed inland, in higher elevations that have little vegetation because the area is about 60% snow-covered and still frozen, protecting them from predators.

While they don’t build nests, they find “depressions” in the hills, and line the bottoms with a soft material. Once the eggs are laid, typically in June, the males and females take turns incubating them. When the birds are not on the nest, according to Niles, they fly to the coastal areas to feed.

Once the eggs hatch, in July, the surrounding area has thawed, so the males and young can eat mosquito larvae and spiders, for example, easily. The females are the first to start the trek southbound, typically at the end of July.

The males leave once the young learn to fly. The young leave by mid-September, once they have grown a bit more. “If the breeding fails, which is what I think happened this year because of the late crab spawn, the males and females will leave at the same time,” Niles said. “Then we will start seeing both sexes here earlier than normal.”

Since the birds leave the Arctic in smaller flocks, their migration routes are not exact because food options are more plentiful during the summer, in North America.

“During the southbound flight, the birds can build weight and muscle from young clams and mussels,” Niles explained. “We know they stop along the Hudson Bay, Quebec, and the St. Lawrence Seaway, Cape Cod, Brigantine and Stone Harbor/Hereford Inlet.

“There are three places on the east coast of the U.S. where they jump off to cross the ocean to South America, and two of them are in New Jersey: Stone Harbor and Brigantine. They have ocean inlets without any jetties, which means there are shoals and beaches with plenty of food, but what that also means is that, in August, there are people everywhere on the beaches and boats going to the shoals, which is not good for the birds,” he added.

A new app will be used to help determine when the birds departed to better understand weather conditions, as well.

Atlantic Shores Offshore Wind (Atlantic Shores) partnered with Niles, the U.S. Fish and Wildlife Service, and Normandeau Associates, a professional wildlife research organization, to research the movement of the red knots during their southbound migration.

Atlantic Shores is a split  partnership between Shell New Energies US LLC and EDF Renewables North America, formed in December 2018, to co-develop a 183,353-acre lease area about 10-20 miles off the coast, between Atlantic City and Barnegat Light. Once fully developed, it has the potential to generate 2,500 megawatts of clean, renewable wind energy - enough to power one million homes.

Starting Aug. 10, WRP began attaching satellite tags to 30 red knots as they stop in Brigantine Bay on their way south. The tags will allow a satellite to collect up to 60 pings of information on each bird’s precise location, flight path, and varying altitude.

Data will be collected near real-time, as it is available via satellite, and more comprehensively analyzed by researchers and Atlantic Shores over the coming months.

The trapping and installation of satellite transmitters onto the birds is part of the need to gather data on the environmental impact of the wind turbines. “The data will not only collect the location of where they fly but also altitude,” Niles said. “How long does it take the birds to get above the wind turbines? This will add to the information for the environmental assessment.

“Building a truly green future requires that renewable energy projects are held to a high standard in terms of ecological impact,” Niles said. “I’m encouraged that Atlantic Shores approached me to launch this study, both to inform their plans for offshore wind in New Jersey and to further our knowledge of red knot migratory patterns. This is a great example of how private and public institutions can work together to improve the lives of people and the natural world around us.”

“Atlantic Shores leads with science,” added Jennifer Daniels, development director, Atlantic Shores. “Pro-active studies like these allow us to produce renewable energy based on cutting-edge, real-time environmental data. The red knots study is one of the many ways we intend to use data and insights from the scientific community to responsibly develop our lease area.”

Early indications are that numbers are down for horseshoe crabs spawning along the Delaware Bay beaches and also for Red Knots, who feast on horseshoe crab eggs before completing their 9,000-mile trek to breed in the Arctic tundra.