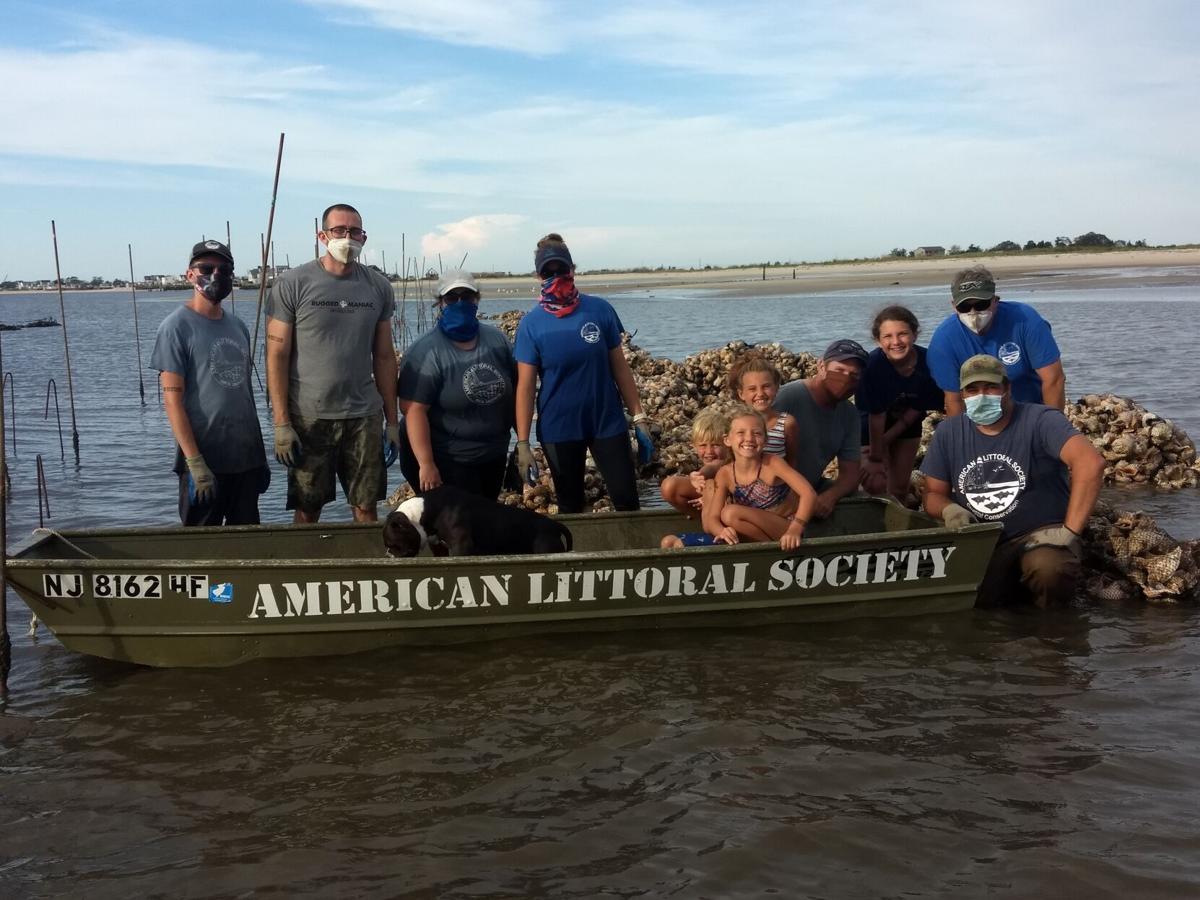 Employees and family members of the American Littoral Society and U.S. Fish and Wildlife Service got together Aug. 22 to build a whelk reef at Cook’s Beach. Because of COVID-19, volunteers were not able to participate in the event. 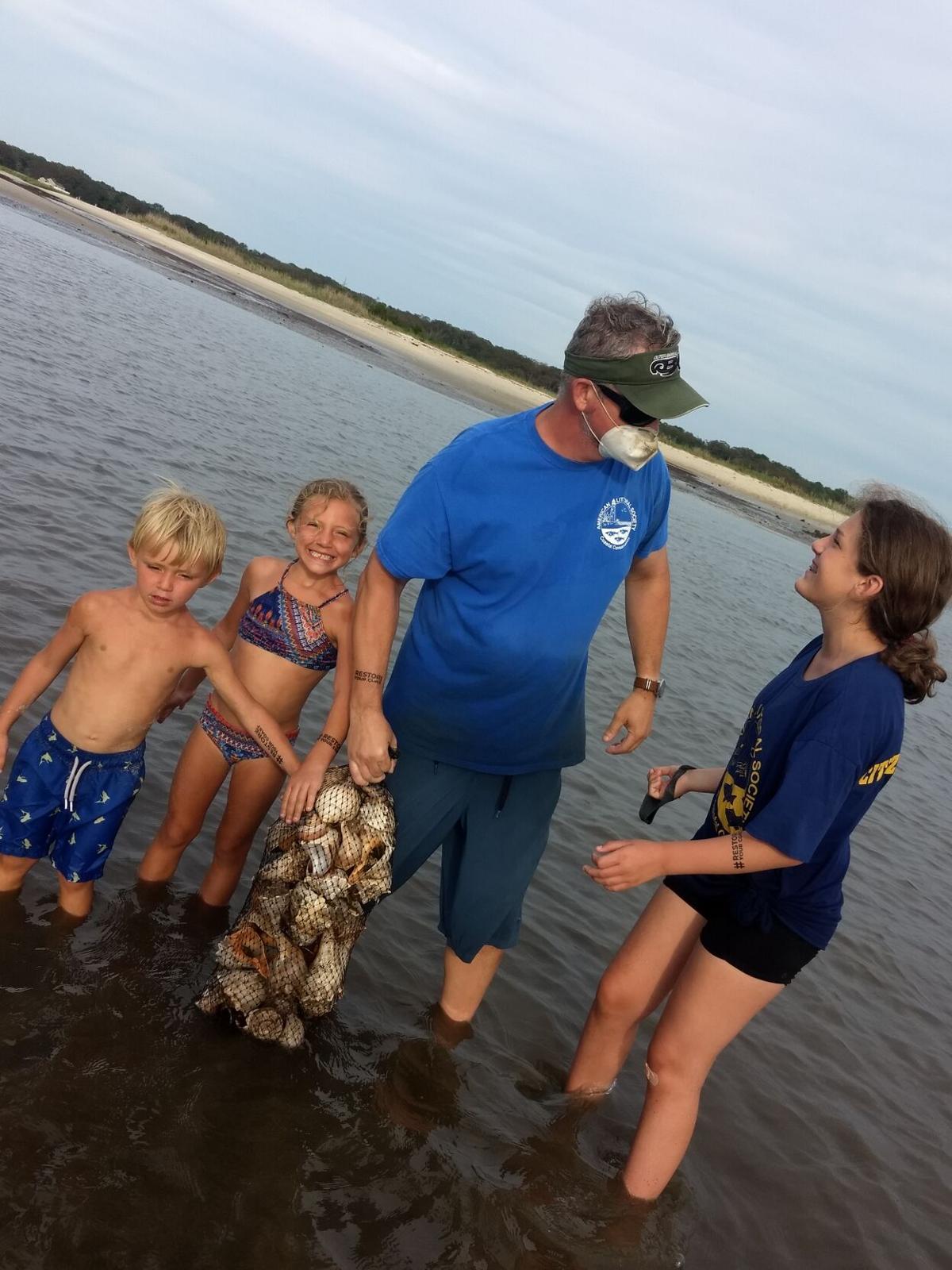 Capt. Alek Modjeski, his daughter, Olivia, and Isla and Grand Godshall helped take bags of whelk shells to Cook’s Beach to finish building a reef that will help rebuild beaches and bring back fish and shorebirds. The event Aug. 22 was limited to family of employees because of COVID-19. 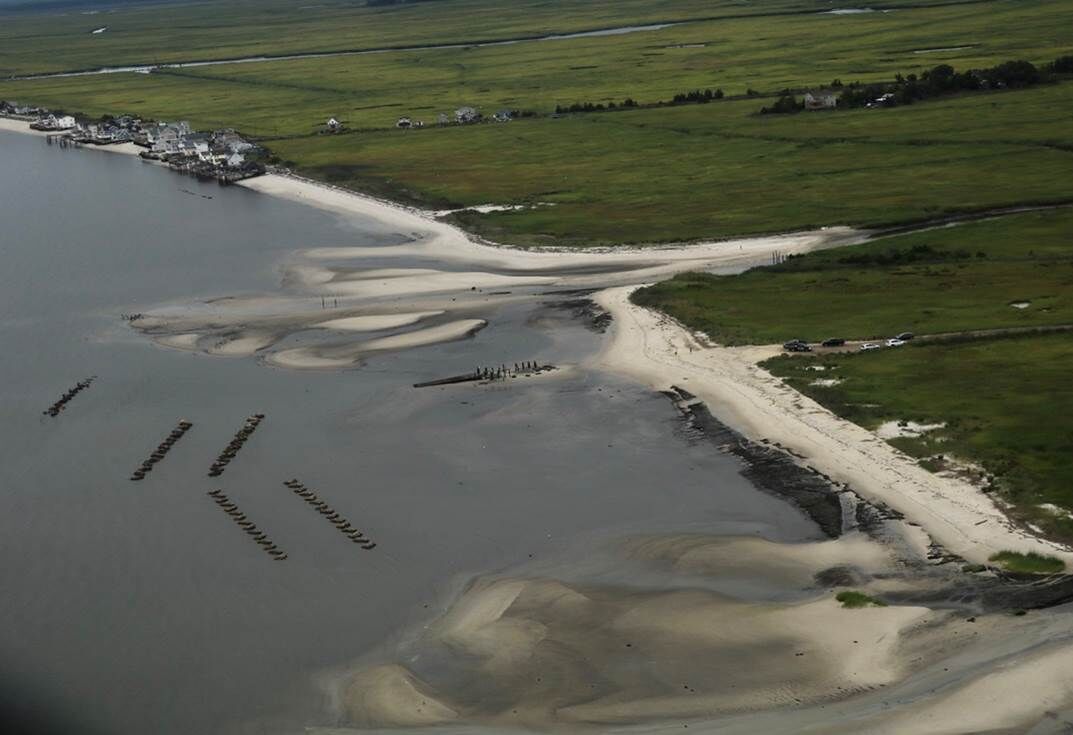 This aerial photo of Cooks Beach, and existing reefs at low tide, was taken by drone. A row in front of the one on the far left was added Aug. 22 to finish the three double-rowed reefs being built as part of post-Hurricane Sandy restoration work.

COOK'S BEACH - The last of eight reefs made from recycled whelk shells were put in place Aug. 22, at Cook's Beach, creating a habitat where sea creatures are foraging and refuging.

According to Capt. Alek Modjeski, habitat restoration program director for the American Littoral Society (ALS), 2,700 bags of the official state seashell were carried by boat or wheelbarrow from the beach to the intertidal, where ALS and U.S. Fish and Wildlife Service employees placed and secured them along a 200-foot-long reef, double-wide, about 150 feet offshore.

The activity finished the third set of reefs at Cook's Beach. The 10-pound bags of shells were provided by Atlantic Capes Fisheries.

The reef-building began after Hurricane Sandy to restore beaches along the Delaware Bayshore, home to horseshoe crabs, shorebirds, like the migratory red knots, and local fish, such as dogfish, perch, and pinfish. Oyster reef living shorelines were established at South Reed’s Beach, Moore’s Beach, Dyers Cove, and Thompson’s Beach.

“Cook's Beach is a feeder beach,” explained Modjeski, noting the sand feeds the beaches on either side. “It has shoals on each side, which are perfect for horseshoe crab spawning.

“It’s also one of the best beaches for the red knots,” he added, noting that, in the 2019 migratory season, 94% of the 31,000 birds tracked landed at the restored beaches to fill up on horseshoe crab eggs.

The red knots travel from southern Chile to the Arctic, stopping along the Delaware Bay region to build fat and gain protein to sustain them along the final trek to their breeding grounds.

“We monitor the biological impact of the reefs from both boat and land,” he said, “and we also monitor them to understand the wave action on beach erosion.”

Modjeski said the whelk shell’s multi-dimensional features make it ideal for preventing sand loss from wind-driven waves, creating a natural and protective living space for numerous aquatic creatures, such as oysters, and making calmer waters for spawning horseshoe crabs headed for the beach.

“The shells create little pockets where the young fish can hide for protection, forage for food, or take refuge,” he said. “So far, we’ve seen sponges, crabs, dogfish, perch, and pinfish. People ask, 'when will we see weakfish?' We’ve not seen them yet, but we keep seeing bigger fish coming into the area, so it’s just a matter of time before we see the return of weakfish.”

Weakfish, once the bread and butter of commercial and recreational anglers in Delaware Bay, experienced a decline in numbers over the years, often attributed to natural predation and overfishing. They feed on small fish, shrimp, and crabs.

There is a gap between reef segments to allow the horseshoe crabs to move easily to shore to lay eggs. The reefs slow erosion and shelter the beaches. Wave action flips horseshoe crabs, so the calmer water is more welcoming.

Modjeski said they plan to build reefs at Pierce's Point and Fortescue over the next several years since the project is funded for 10 years.

“We usually have huge groups of volunteers helping us build the reefs and have a shell-a-bration afterward, but because of COVID-19 restrictions, we’ve had no volunteer events,” the captain noted. “It’s been mainly ALS and U.S. Fish and Wildlife Service employees and their families helping out.”

Stockton University’s Coastal Research Center (CRC) got involved in the beaches’ replenishment after Hurricane Sandy stripped the thin sand layer that covers the saltmarsh, exposing organic mass and peat below, according to a university press release, in 2019.

Decomposing organic matter releases a gas that is toxic to the development of crab eggs. The absence of sand could be a death sentence to the crabs, as well as the shorebirds that bulk up on their eggs.

There is a science to the sand placement and crabs have preferences, according to Steven Hafner, assistant director of the CRC, who coordinates the habitat restoration work.

“A beach with a steeper slope is easier for crabs to enter and exit the water,” he said. “On a wide, flat beach, crabs get pushed up at high tide and have a greater chance of getting disoriented.”

With no decline leading them back into the water, crabs can get confused. Those that get lost hunker down in the sand and wait for the tide to rise. The less fortunate get flipped upside down and are in danger of drying out and becoming a meal for the gulls.

Beach width, defined as the length from the dune to the mean high water line, needs to be wide enough to accommodate the mass of crabs that arrive together on full and new moon high tides.

Horseshoe crabs need to have a wide enough beach to deposit a density of eggs that will ensure their survival and feed foraging birds, according to Hafner.

The best sand has a medium-coarse grain size to allow enough oxygenation during the tidal cycles and to support the right amount of beach slope. Fine sand grains could suffocate eggs.

“We will monitor as long as we are funded,” Modjeski said. “We’ve written best management practices on the lessons learned from our work, as well. We’ve learned that raising the marshes up higher promotes resiliency. We’ve combined the sand berm with a vegetative berm to protect the reefs, and protect the areas. We saw that we reduced erosion by 35% during low and medium tides, so the reefs are working.”

Veterans Day is typically a day of remembrance, but the American Littoral Society used its annual recognition of the date this year to also look forward.