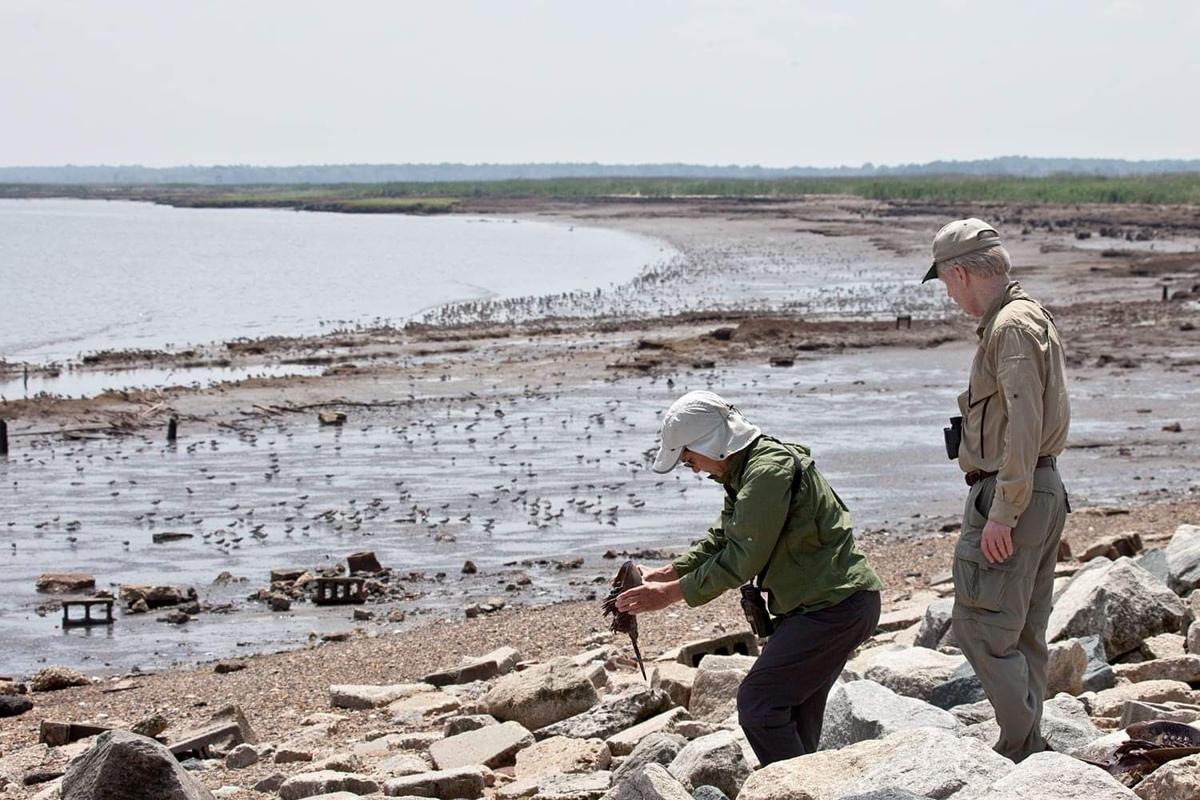 Horseshoe crabs along the Delaware Bay face multiple threats. Years of overharvesting for bait and biomedical bleeding are twin threats facing the species. 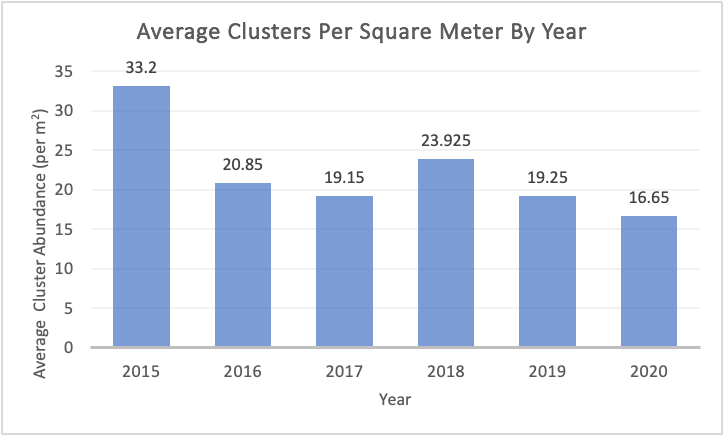 The above graph indicates the horseshoe crab egg cluster densities on New Jersey’s beaches, from 2015-2020. The egg density peaked after the birds left the bay in 2020. 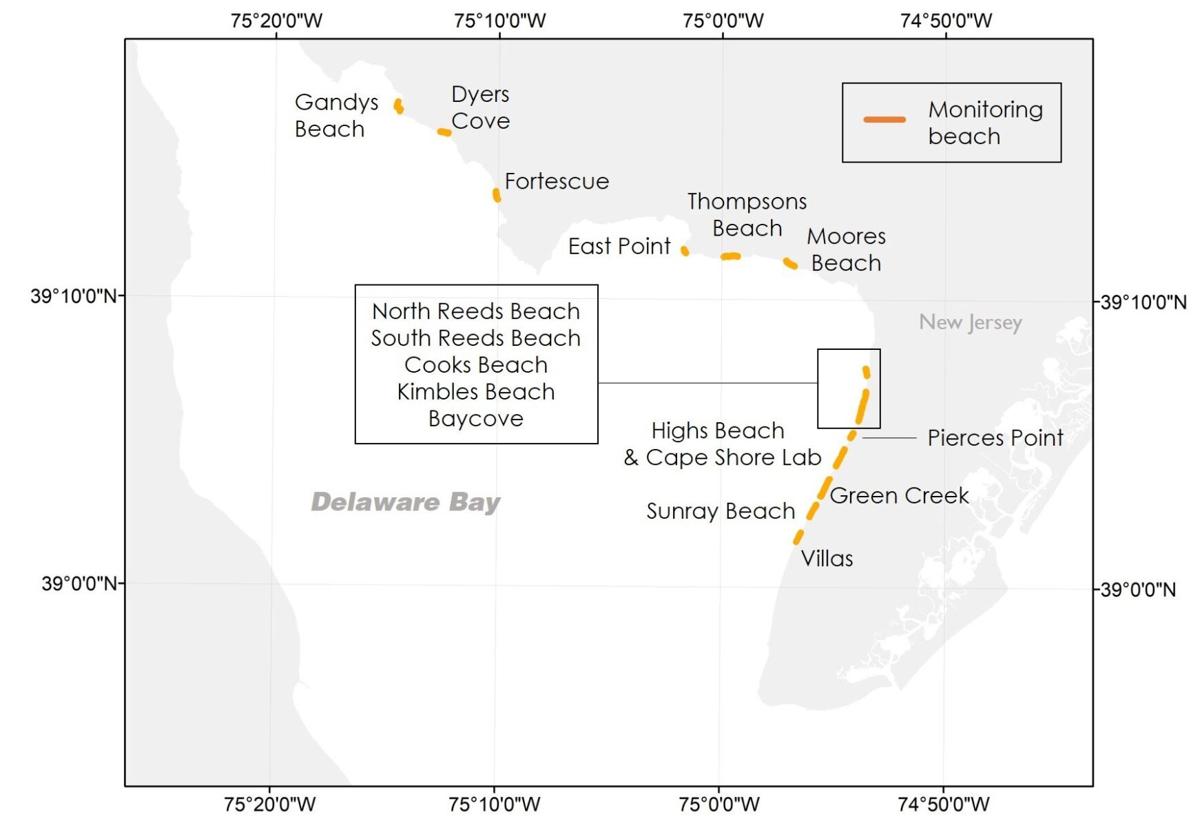 The above map shows which Delaware Bay beaches are monitored for horseshoe crab eggs and bird migration. This is the 25th year of the Delaware Bay Shorebird Project. 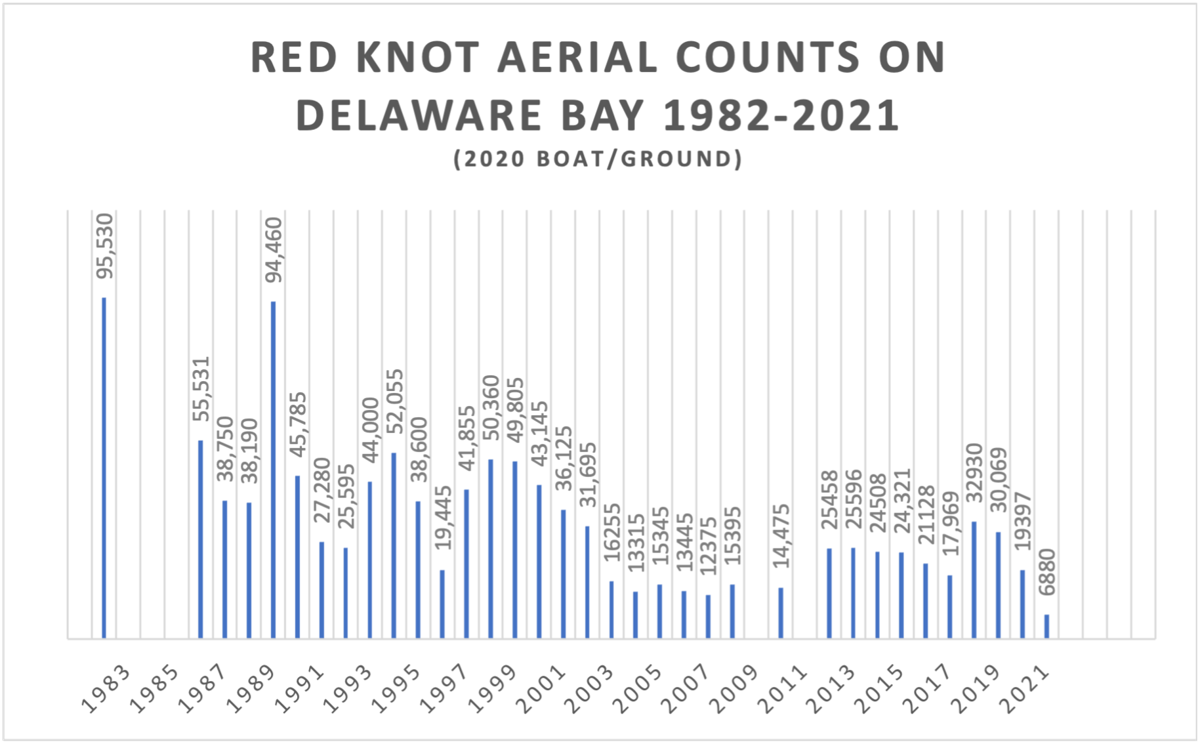 The above graph shows the peak aerial and ground counts of red knots in the Delaware Bay, from 1982-2021. The birds migrate each spring from Chile to the Arctic to breed, before returning. They count on doubling their weight on a stopover at the Delaware Bay when horseshoe crabs spawn. If the timing of the spawn is different than the migration, the bird mortality rate can rise, as more birds are unable to make the trek. That’s what happened in 2020, and its effects are visible in the low numbers this year.

REEDS BEACH - A combination of environmental factors and continued overharvesting of female horseshoe crabs are threatening the Delaware Bay ecological system, as the number of red knots who stop there for critical food supplies plummeted this year.

According to Dr. Larry Niles, owner of Wildlife Restoration Partnerships,“Our responsibility is to make sure the female horseshoe crab population is the best it can be. In the 1980s, our aerial counts showed we had 90,000 red knots stopping at the Delaware Bay to feed as they made their journey to breeding grounds in the Arctic from Chile. This year, our counts show 6,000-7,000. At this level, things could blank out, and as the population decreases, so does everything else in the bay.

“The entire Delaware Bay ecosystem benefits from those horseshoe crab eggs,” he continued. “The best way to manage it is to stop female crabs from being harvested. If we did that, and the numbers went up, we would know what the cause of the low counts was. If it didn’t, then we would know overharvesting isn’t the reason behind the low numbers.”

Niles said they are seeing the effects of last year’s unsuccessful breeding season as one cause behind the lower numbers this May.

“Last year, the water temperature was cooler, so the crab population was half of what it could be,” he explained. “The population of eggs was relatively so small, and it was condensed to late May and early June. The birds were gone by May 24. When something similar happened in 2002-2004, we had a 37% mortality rate.”

Another factor in this year’s lower red knot population wastwo tropical storms in May, the first time that occurred during the migratory season.

“The birds may have used up their energy reserves with the north winds, slowed migration, or been thrown off course because of the storms,” Niles said. “They didn’t come to the bayshore migratory path. This didn’t seem to have such an effect on the short-distance migratory birds who come from the Caribbean and the south, however. They gain weight slowly and may have chosen to bypass the bay when they found no eggs.”

Niles said using the crabs for bait and their blood also continues to impact the number of female horseshoe crabs.

“There is no requirement for the industry to report to the public how many they are killing,” he said.

The “good thing” about the bay is that Niles said it is in “good ecological shape,” and if harvesting of females was stopped, the crab spawn should jump.

“Our goal should be to build a horseshoe crab population so super-abundant, the eggs are a foot deep,” Niles said. “Every fish in the bay benefits by either eating the eggs or young, or eating the smaller fish who feed on the eggs.

"Everything would benefit: Blue claw crabs, stripers, juvenile loggerhead turtles, weakfish,tackle shops, restaurants, the sportfishing industry. Once the crabs lay their eggs in the sand, it is money in the bank.”