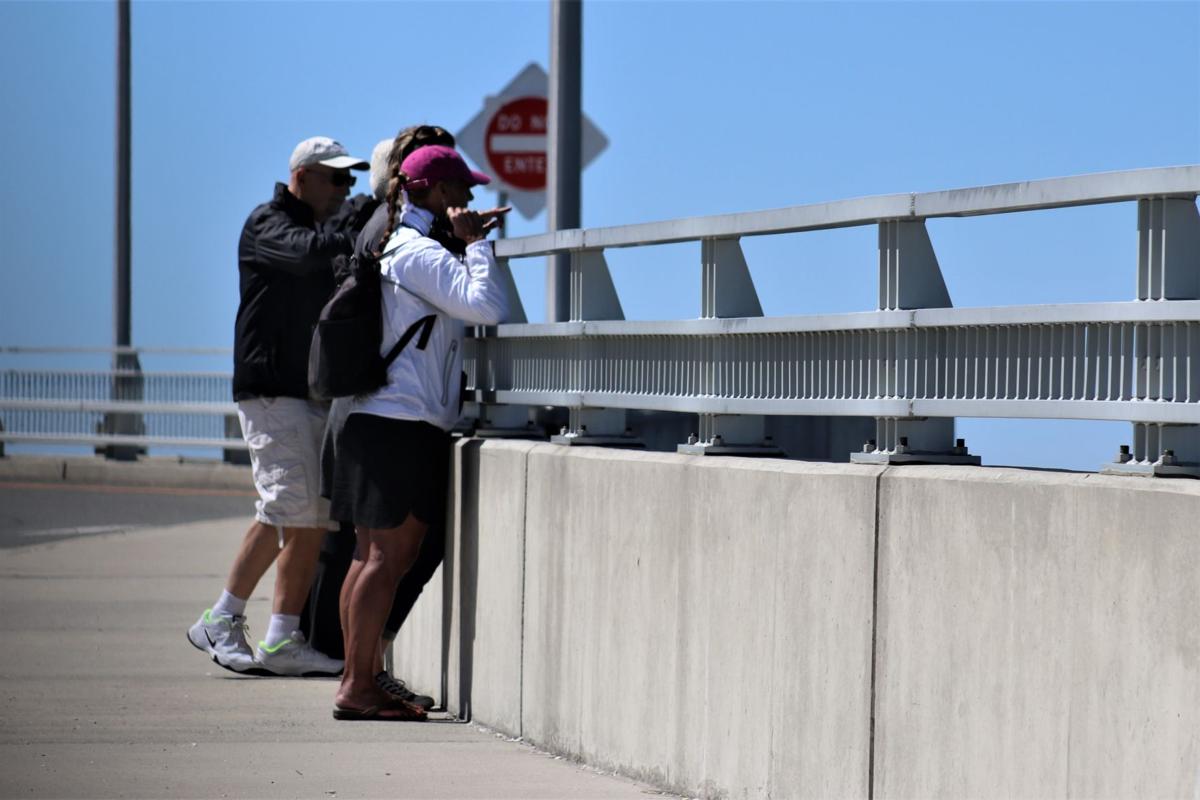 Visitors stop for a closer look at birds nesting alongside a walkway connecting Ocean City and Somers Point. Since its completion, the route has become popular with runners and walkers, as well as with birders hoping for a glimpse over the rail. 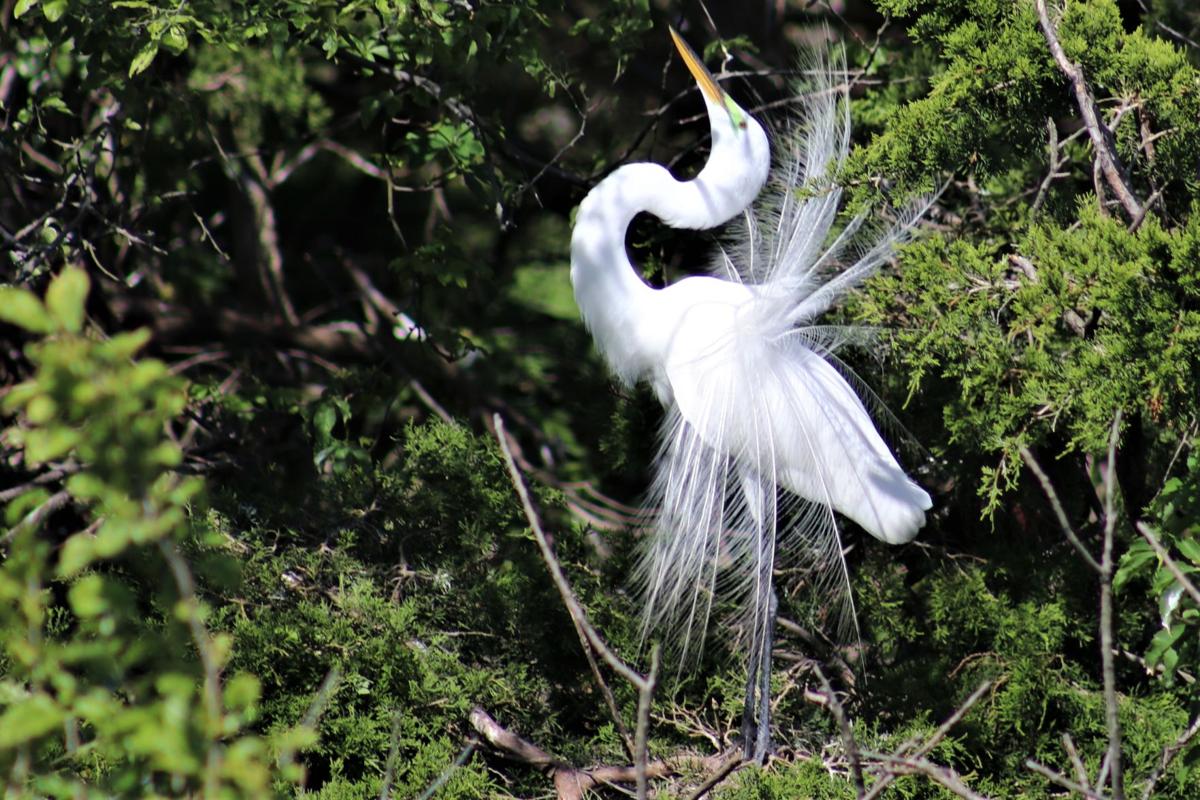 An egret, in its spring plumage, shows off near the Ocean City Welcome Center on a bridge into town. Passersby are, at times, amazed at the variety of wildlife they can glimpse over the rail. 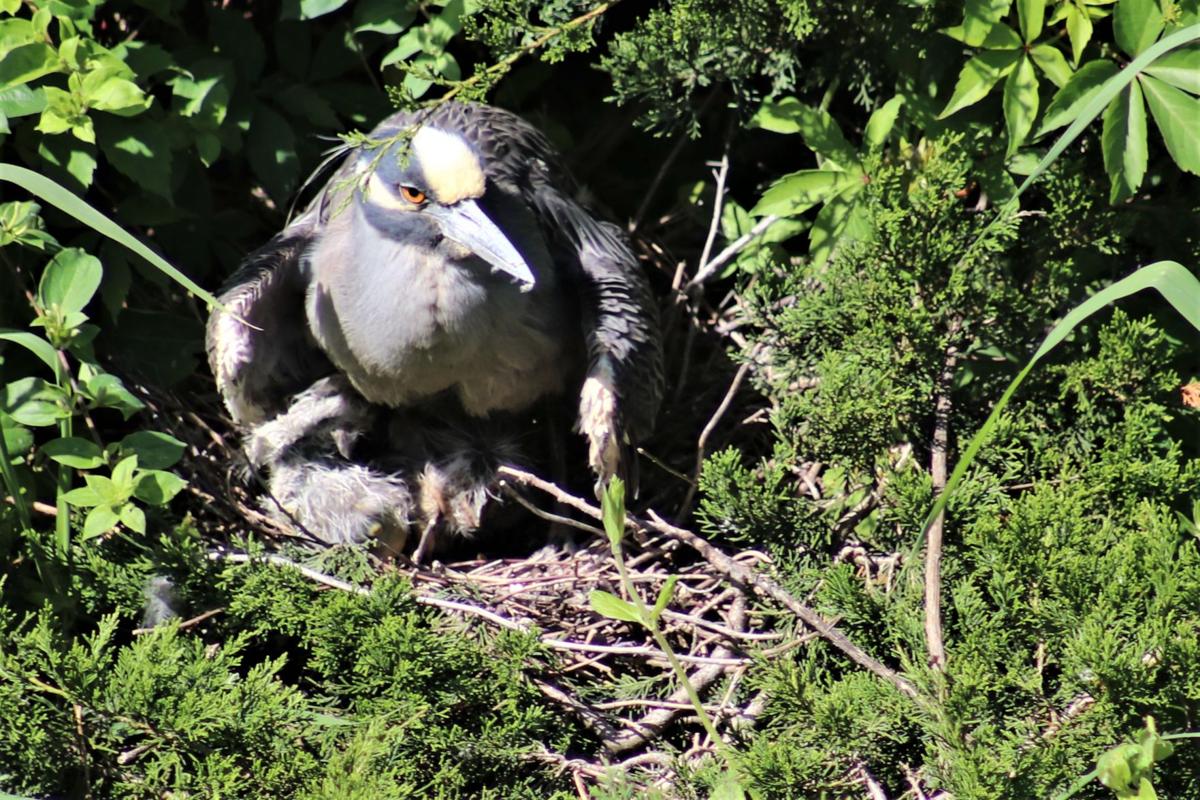 A yellow-crowned night heron keeps a protective wing over the hatchlings in a nest near a walkway over the Route 52 Causeway. The cement and steel construction offers an extraordinary glimpse into the life of herons and egrets.

OCEAN CITY – With the completion of the Route 52 Causeway, in 2013, the latest to connect Ocean City to Somers Point, the inclusion of a wide pedestrian and bicycle route along the south side opened new routes and new vistas.

Separated from the four lanes of traffic, the 2.2-mile route quickly became popular with runners, walkers, and bicyclists. In the years that followed, aside from a brief closure this year due to COVID-19, the route remains a destination in itself, with visitors and residents taking advantage of views of the city and of the Great Egg Harbor Bay never before accessible.

It did not take long before people began to notice another view. A portion of the walkway overlooks an active heron rookery, one that had previously been nearly inaccessible to human beings. Now, it became possible to observe intimate moments of bird behavior.

On a recent afternoon, many participants in a Black Lives Matter march across the bridge (https://bit.ly/3hqbFoD) slowed to an astonished stop, as they spotted egrets and herons flying among the dense evergreens, seemingly oblivious to the passing commotion.

In early spring, passersby can glimpse elaborate mating displays, while by June, those who look carefully can see gray, fuzzy fledglings in nests under their mothers’ protective wings.

“If you can get runners to stop mid-step to look, I can tell you, they appreciate it,” said Michele Gillian, director,Ocean City Chamber of Commerce. Her office is in the Welcome Center, overlooking the best birdwatching spot.

As of an interview June 11, the Welcome Center remained closed to visitors due to the ongoing statewide restriction, but birders still crowded its parking area, ready to line the railing with binoculars and massive camera lenses.

“You can’t get a parking spot here. It’s a spectacle,” she said.

All that focused attention often draws the attention of people running or riding by, according to Susan Crowe, of Ocean City, a bird enthusiast and a regular at the site.

As the new causeway was being constructed, she said, she was eager for a chance to get out and walk the route. Soon after the path opened in spring, she said, there were gulls’ nests and other ground-nesting birds along the marsh, as well as the nests in the cedars and other trees near the Welcome Center.

“You could tell no humans had been there for a while,” she said.

Many of the gulls abandoned their nests that year, as more people came to the area, Crowe said, but the herons and other wading birds stayed, and have continued to return to the spot year after year.

“They certainly seem acclimated towards it,” she said. She described the variety in the small area as astonishing, with great egrets, snowy egrets, and great blue herons nesting in the thick tangle of greenery, along with tri-colored herons and green herons.

Glossy ibis float into the site in groups, and there are many songbirds and the occasional fish-hungry osprey passing by. It’s often possible to hear the distinctive, chirping call of the clapper rails without ever seeing one.

“It’s just packed and jammed with every species of bird you can imagine,” Crow said, but it is the black-crowned night herons and the yellow-crowned night herons that seem to be the showstoppers, with multicolored faces, dramatic plumage, and piercing eyes. Usually difficult to spot, a visit to the overlook can yield a dozen sightings once you know what to look for.

See One and You’ll See More

Like a life-sized “Where’s Waldo” page or a 3D magic eye poster from the 1990s, the birds can be easy to miss until you spot one.

“It does take your eyes a little while to learn what to look for,” said Gillian. “Once you see one, you’ll spot more of them.”

Crowe describes people slowing to look over the rail, then emit gasps when they see their first bird.

“The more you look, the more you’ll see,” she said.

Like Gillian, she described a line of photographers arranged along the rail on some days of the season, when the light is perfect or the birds are in their mating plumage.

“What’s more surprising to me is how many people walk by without looking over,” she said.

Crowe got interested in birds and bird photography in 2008, she said.

“I retired. I had nothing to do, and I found myself walking in nature,” she said. She would see various species of birds, but not well enough. “I wanted to see what they really looked like up close.”

She invested in a zoom lens, but she still looks with envy at some of the camera gear people take to the site, with massive telephoto lenses and high-end cameras that can capture the detail of every sunlit feather.

“That doesn’t mean that they’re going to get all the good shots, but it sure makes it easier,” she said.

In addition to pointing out the birds to interested passers-by, Crowe also takes friends to the site. Compared to other bird-centric outings, this one has a nearby parking lot, a paved sidewalk, and a near guarantee of spotting something dramatic.

“I come here to get the calm, peaceful feeling that you get in nature,” she said. “Instead, with some people, you get the same old chatter of the day: ‘Have you been to Acme? What was there on sale? Did they make you wear a mask?’ Then you learn not to bring that person.”

The causeway uses the marshy islands on the bay like an uneven hopscotch court, in a combination of roads and bridges to cross the bay. The first bridge was completed in 1914, with the draw bridge many remember dedicated in 1933. That one was replaced with the current Route 52 Causeway in a $500 million project that took years to complete.

Bill Stuempfig knew the area well, even before he opened Baycats, on Bay Avenue, and started leading kayak nature tours around the channels and bays. He sold the business some time ago but continued to lead nature tours to view the birds, sunsets, and other local wonders. The islands have long been home to an amazing variety of birds, he said, especially the one that is now home to the Welcome Center.

“It was always called heron island,” he said. While the bridge was being constructed, he said, the contractor needed special dispensation to continue work into the nesting season. The herons did not seem phased by the project, he said.

Over the years, attitudes about the birds and the islands in the marsh have changed dramatically, Stuempfig said. Long ago, the area where the Welcome Center now stands was used as a dump. A neighboring island visible from the bridge retains the name Cowpens Island, from the days when cattle were kept to graze on the salty plans.

“That was a great way to destroy that island,” he said.

By the early 20th century, herons and egrets were killed during the breeding phase, so that their astonishing plumage could be used for women’s high fashion hats.

“The birds were seen as a nuisance on those islands,” Stuempfig said. With passing decades, attitudes toward both the bay islands and the birds shifted, and both are now protected. Ocean City has recently undertaken to restore another back bay island, Shooting Island, as part of a living shoreline project.

Stuempfig has toured the islands by kayak for decades. Going further back, he said, fishermen would paddle over to the island where there was a thriving rookery.

The former Ocean City Welcome Center was a small brick building on the side of the former causeway, surrounded by a tall evergreen hedge. There are few places along the back bays where sharp-eyed observers will not find shorebirds or other nature, but the former site was nothing like this, Gillian said.

The multistory new building is surrounded by covered porches, where visitors can take in the views of the water and the nesting birds. There are also displays inside the center, which Gillian hopes to soon see reopened as the pandemic restrictions continue to ease, including prominent photographs of the herons donated by birdwatchers.

She believes most visitors who get to see the animals up close and in the wild take away a new appreciation for the natural world. In essence, there’s nothing like seeing it live, she said. Personal connections matter.

“If you go to a concert and you can see the piano, the violinists, it’s going to be different than if you just see it on TV,” she said.

This story was produced in collaboration with CivicStory and the New Jersey Sustainability Reporting Project at www.SRHub.org.