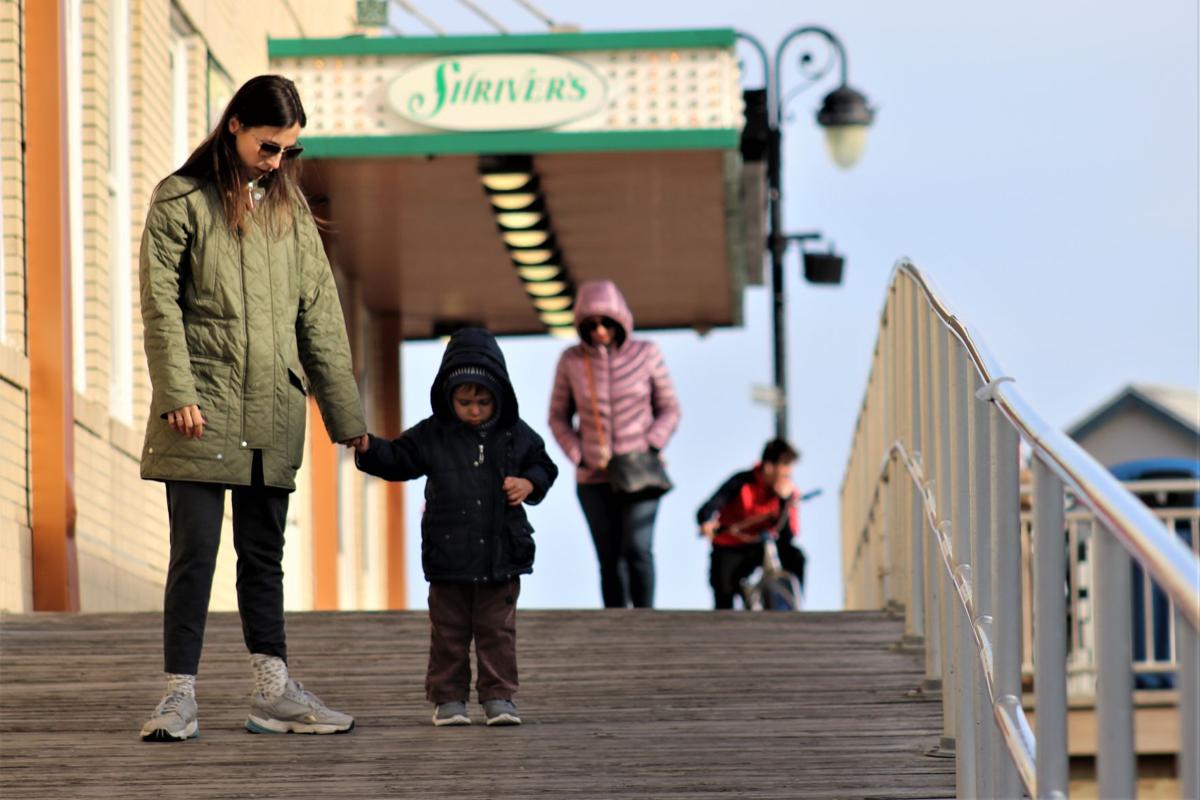 With few businesses open and schools out throughout the region, many have visited the Ocean City Boardwalk while much of the state is shut down in an attempt to limit the spread of COVID-19. Local and state officials say this is a bad time to visit the shore, citing concern for spreading the virus. 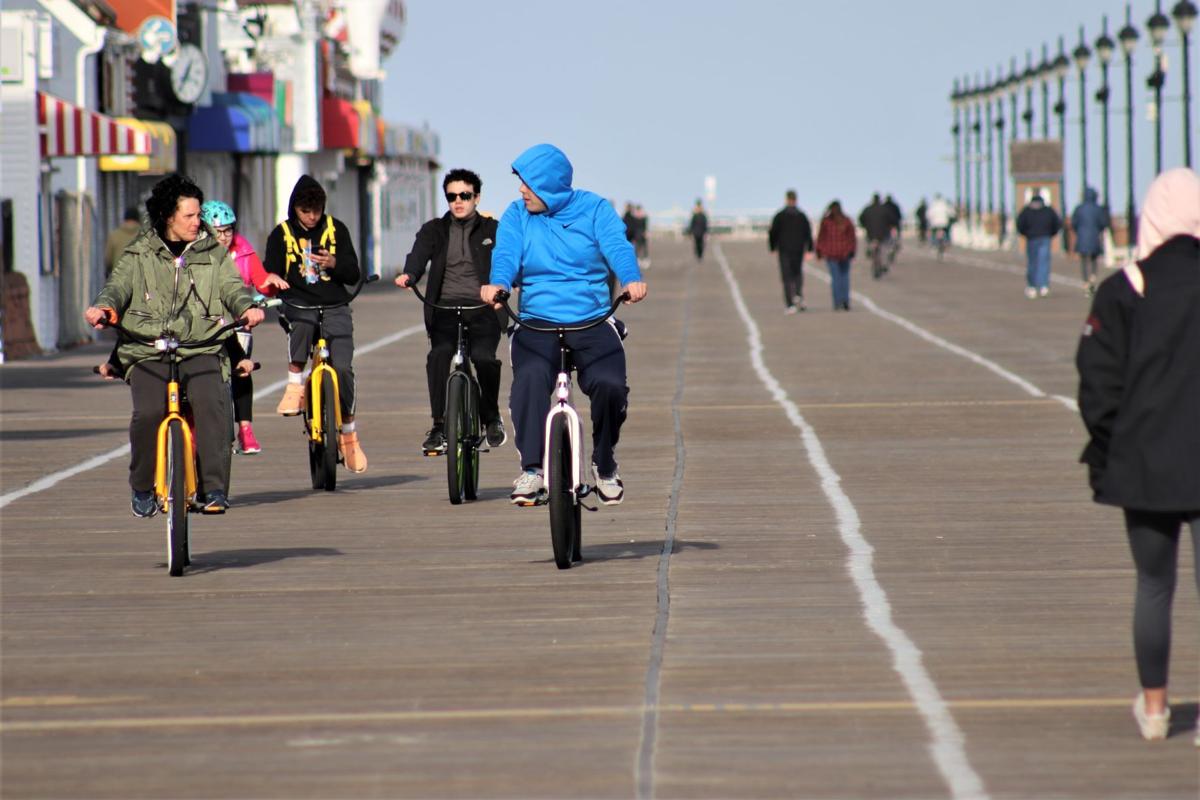 Visitors of the Ocean City Boardwalk ride their bikes while making an earlier spring visit to the resort.

NOTE: The Cape May County Herald is offering full coverage of the COVID-19 / coronavirus emergency to all, with no payment required. We are committed to ensuring our readers can make critical decisions for themselves and their families during this ongoing siutation. To continue supporting this vital reporting, please consider a digital subscription. For more coverage, subscribe to our daily newsletter.

OCEAN CITY – In most years, the sight of bicycle riders and visitors on the boardwalk on a sunny, late March afternoon would not seem particularly unusual.

However, in this most unusual spring, with public spaces from Tokyo to Times Square standing empty, as more people around the world seek social distance, the sight of even sparse crowds on the boardwalk seemed almost unsettling.

Throughout town, even as businesses closed and the city locked up playgrounds and recreational areas, hoping to slow COVID-19's spread, cars were on the road and many summer homes were open, as second homeowners came to the shore.

With school out in New Jersey and Pennsylvania, and many either working remotely or not at all, many see the shore as a viable option for increasing social distance.

“We’ve definitely seen a larger number of people here on the island than you would expect in mid-March,” said Katherine Custer, the director of community services in Sea Isle City.

This is despite a well-publicized appeal from Cape May County Freeholder Director Gerald M. Thornton to stay away. On March 17, he said visitors would strain local supermarkets and eventually overburden the medical system in Cape May County if a significant outbreak takes place at the shore.

“We love all of our visitors from Pennsylvania, North Jersey, New York and further away,” Thornton said, "but this is not the time to be visiting the shore, as we try to focus resources needed during this pandemic to our residents.”

Across social media and in the Herald's Spout Off section, it has become a hot-button issue, with sometimes heated rhetoric from both sides. On several Facebook groups related to particular shore towns, discussions get quickly deleted.

For Dominique Coghan, it all seems far too hostile.

“No, we’re not here buying up all the toilet paper,” she said.

She grew up in Ocean City and later bought her mother’s house. She and her husband, Rich, and their two children now live year-round out of state. They are in the process of selling one house and buying another.

In the meantime, they are in Ocean City. The children are already extremely stressed.

“They’re comfortable here. It lessens their anxiety,” she said, in a recent interview. The family brought groceries from home and are keeping to themselves, taking the kids for bundled up walks on the beach and visiting the nearby basketball court, until that was shut down.

“To me, this is home. When I say I’m going home, it’s here,” she said. “It’s upsetting to read all of those comments. I’ve noticed a lot of hate for people from out of state from Ocean City residents.”

She did not see that kind of hostility when she was growing up in town, she said.

Ocean City Mayor Jay Gillian has issued a weekly statement for years, including information about city events, project updates and news about the town. With the rapidly changing situation, he put out one almost every day, starting March 15.

While Wildwood publicly weighed closing its bridges, Gillian said the city government has no constitutional power to keep people from their property. He reiterated his request March 19, asking everyone to limit unnecessary travel, including travel to and from Ocean City, adding that the recommendation was not limited to visitors from out of state.

“It saddens me to see the divisiveness spawned by recent statements irresponsibly singling out this population,” he wrote, in a letter signed March 19.

Gillian did not respond to a request for an interview. City spokesman Doug Bergen said the mayor’s statement speaks for itself, saying there would be no further comment.

“It’s truly a time for folks to come together,” Bergen wrote, in an email.

In his March 19 statement, Gillian asked everyone, including residents, to follow the guidelines presented by the Centers for Disease Control and Prevention and the Cape May County Department of Health, including limiting travel and practicing social distancing.

“We are facing extraordinary times, and our world is changing in ways that would have been unimaginable just a few weeks ago, but we must do everything in our power to slow the spread of the coronavirus pandemic before it’s too late. We must do what we can to protect every member of our community,” read Gillian’s statement.

In a March 20 update, Gillian said Gov. Phil Murphy may announce further restrictions, as the cases of COVID-19 increase throughout the state.

“Nobody is going to be happy about these potential directives, but we all need to be prepared to comply and to be nice and be kind, as we make these sacrifices. If we all follow these guidelines, we can protect ourselves, our families and our community,” he said.

Sea Isle Has Not Said Stay Away

“We haven’t gone so far as to actually tell people not to use their second homes,” Kathrine Custer said March 20. “We’re certainly hoping everyone will use their best judgment.”

The city canceled several events, including the April 1 Easter Program and Egg Hunt. Regular recreation programs have been canceled or delayed. City offices remained open, but the public is only allowed in the lobby.

Plans were for Desiderio to release a video with instructions for best practices in the face of COVID-19.

For some, days away from work have allowed additional time for social media. In a few instances, some have angrily blamed the area's visitors for potentially spreading the virus, or at least cleaning out supermarket shelves.

One Spouter, from Sea Isle City, also suggested closing bridges, saying it looked like summer in the county.

“Our officials have failed the citizens,” the Spouter wrote.

As many of the exchanges have seemed polite and well-meaning, one writer, on an Ocean City-focused Facebook group, said it was silly to try keeping people from their shore houses, even those under quarantine.

“There’s no reason to try to tell people where to stay safe,” she wrote.

A few restaurants in Ocean City posted signs, assuring people passing by that they were open, even if it was for takeout only. As of March 19, a few businesses on the boardwalk had open doors, but most remained shuttered, even more than in January or February.

In his statement, Gillian pointed out that he owns Gillian’s Wonderland Pier, so he is fully aware of the impact restrictions on movement and travel will have on the town.

“Now is the time for all of us to work together,” reads the statement. “The health of our community must be our first priority, so please stay at home, and please check on your neighbors – particularly the elderly – to make sure all of their needs are met.”

He also gave contact the information for OCNJ CARE, an organization launched to help community members through the crisis.

The Wildwoods' mayors sent mixed messaging regarding what they wanted their second homeowners to do as the COVID-19 pandemic continued this past week.