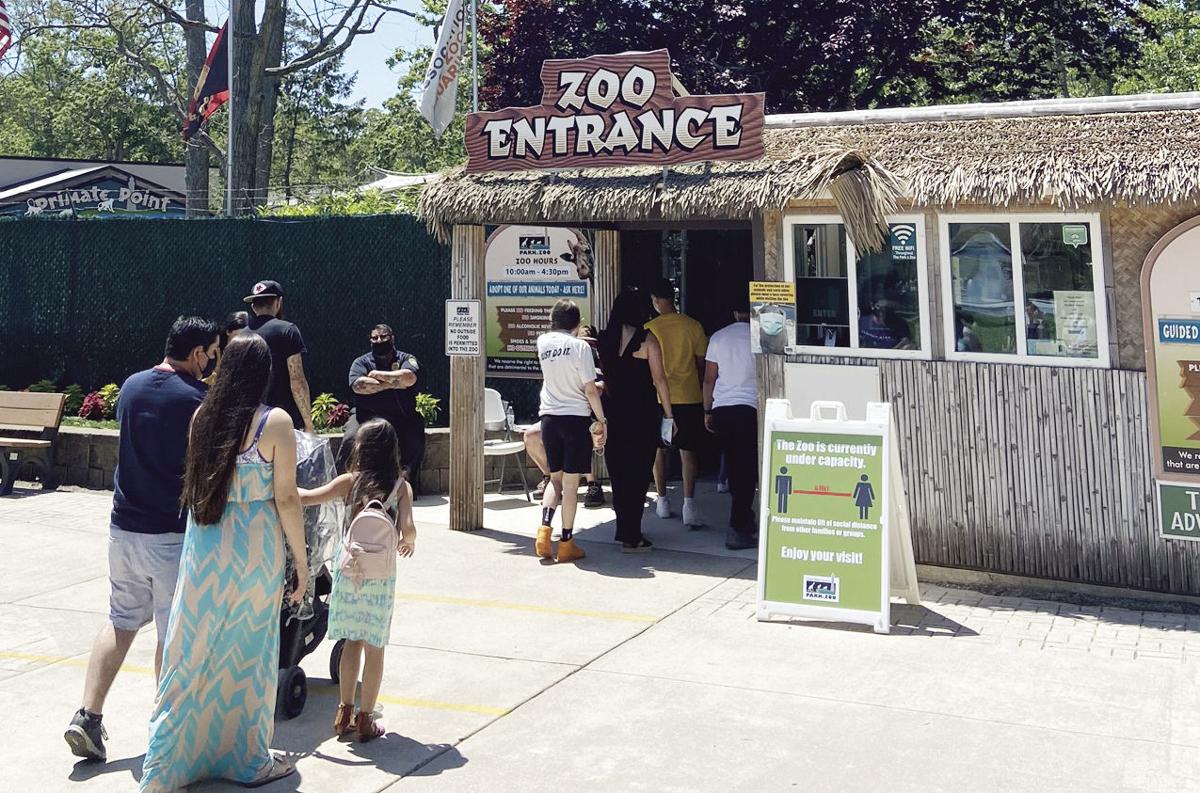 Yellow lines leading up to the entrance of the Cape May County Zoo help guests with social distancing. 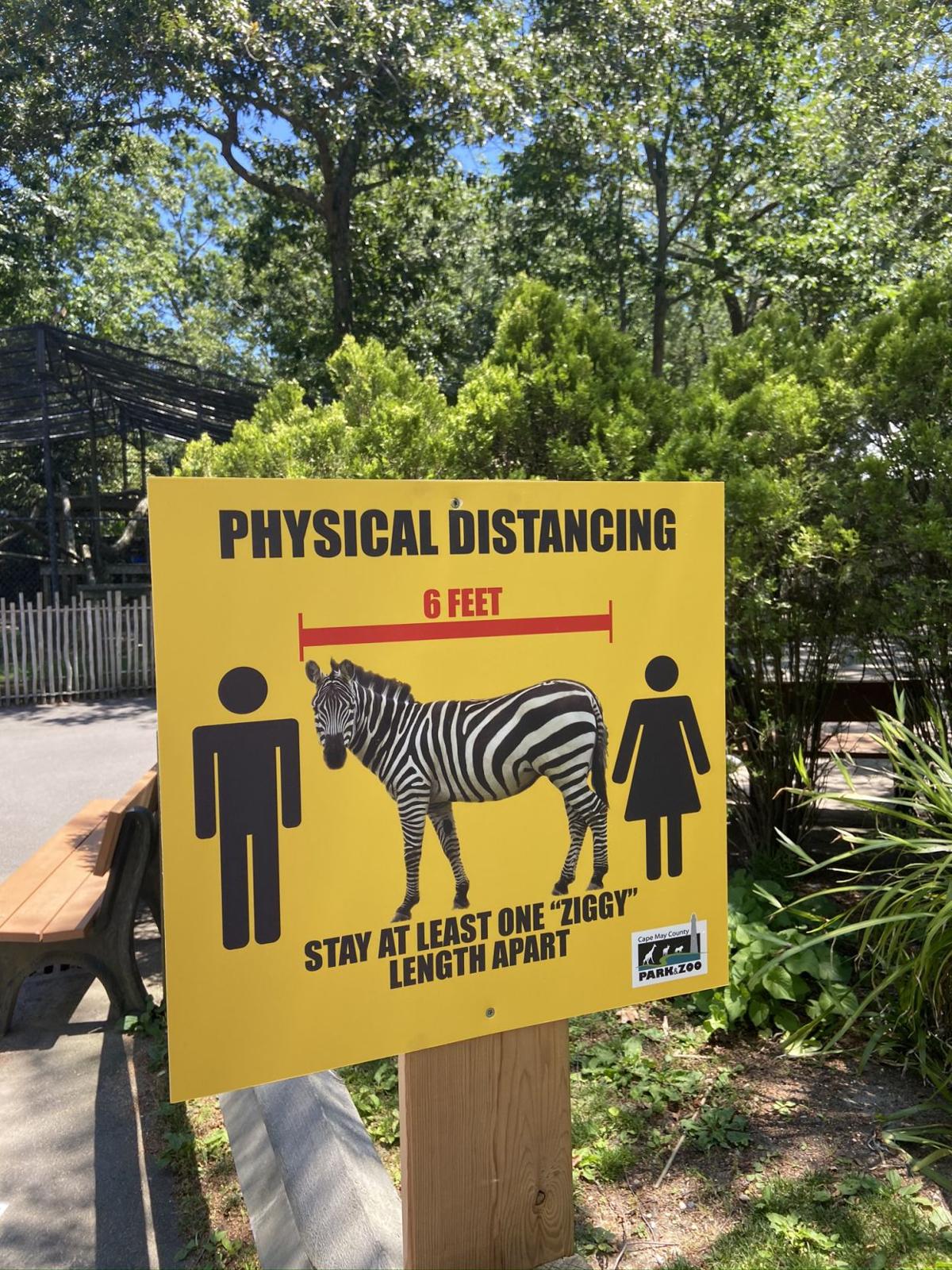 Signage placed throughout the Cape May County Zoo encouraged visitors to “stay at least one ‘Ziggy’ length apart. 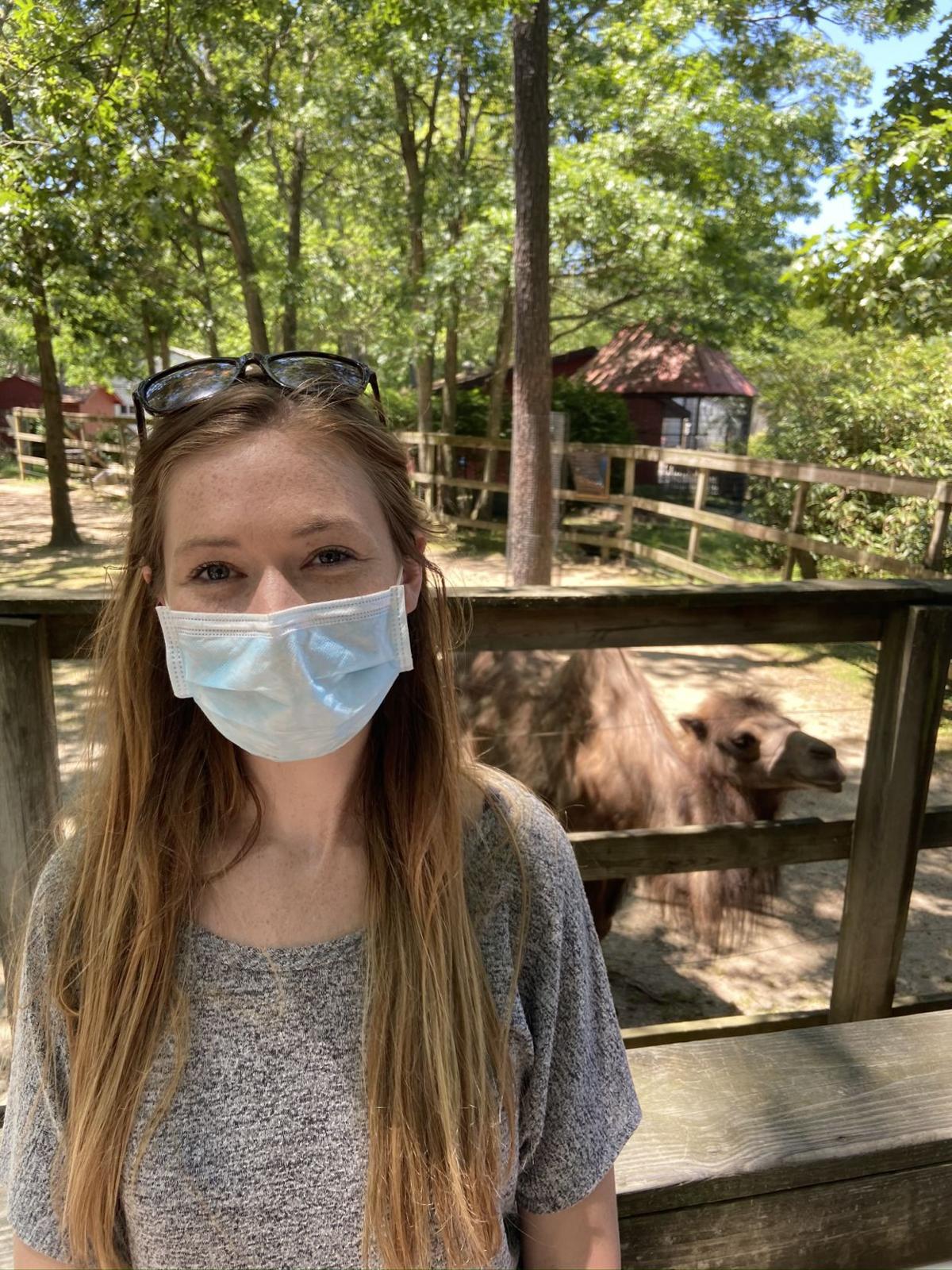 Wearing a face mask, Heather Howard, of Ocean City, poses for a photo with one of the camels at the Cape May County Zoo, which reopened June 13.

Signage guides visitors as they walk through the Cape May County Zoo.

COURT HOUSE - In yet another welcome sign of recovering from the coronavirus pandemic, the Cape May County Zoo opened its gates to visitors June 13 for the first time in three months since it was closed for COVID precautions.

According to earlier reports, the zoo’s 550-plus animals, representing over 250 species, were well cared for by the zoo’s staff of caregivers and veterinarians during the hiatus, but missed the stimulation that comes with being star attractions for many in the region.

Before the opening, Associate Veterinarian Dr. Alex Ernst said, “We have these animals here for the public to make a connection with them and to hopefully realize they are worth saving and conserving. That is our mission, and we are finally able to get back to that.”

Throngs of people streamed through the gates of the zoo, as is a traditional rite of summer for so many families, both residents and visitors. Cars waited to access the zoo premises and parking lots in locations more remote from the gates were filled.

The animals, too, seemed to know that this was an important day and played their role in heightening the sense of anticipation, joy, and relief that the zoo was finally open. The chimpanzees showed off their arm strength as they traversed tree limbs and hanging ropes; the peacocks exhibited their iridescent plumage; and the baby goats already learned to gently butt heads with each other.

The zoo established a loop through the park that is essentially a one-way circuit through the spacious 85-acre, open-air habitats of the various species. The loop is designed to keep an orderly flow of visitors and support COVID precautions.

Numerous signs were placed throughout the zoo, asking visitors to maintain 6-foot distancing. Others encouraged visitors to wear masks, as a measure against the spread of the coronavirus, noting some species, in addition to humans, are especially susceptible to infection. It appeared to this reporter that many chose not to wear face coverings.

In earlier press releases, the zoo described how, in April, it created a Virtual Zoo School for the public, which showed zookeepers feeding the animals. Videos are available at www.cmczoo.com.

Similar to museums and other cultural institutions that have exerted strenuous efforts to continue to educate and bring enjoyment to the public, the zoo used its Virtual Zoo School to connect with people awaiting the day that many looked forward to for a long time. As Heather Howard, a resident of Ocean City, summed up, “It’s great to see the animals on the computer, but nothing can compare to seeing them in person and engaging with them and them engaging with us.”

There is no entrance fee for the zoo, and donations are accepted for the park, which has been accredited by the Association of Zoos and Aquariums since 1989. Donations also enhance the zoo’s continued participation through its accreditation in the Species Survival Plan, a hallmark conservation initiative that cooperatively manages captive populations of threatened and endangered wildlife through careful breeding plans.