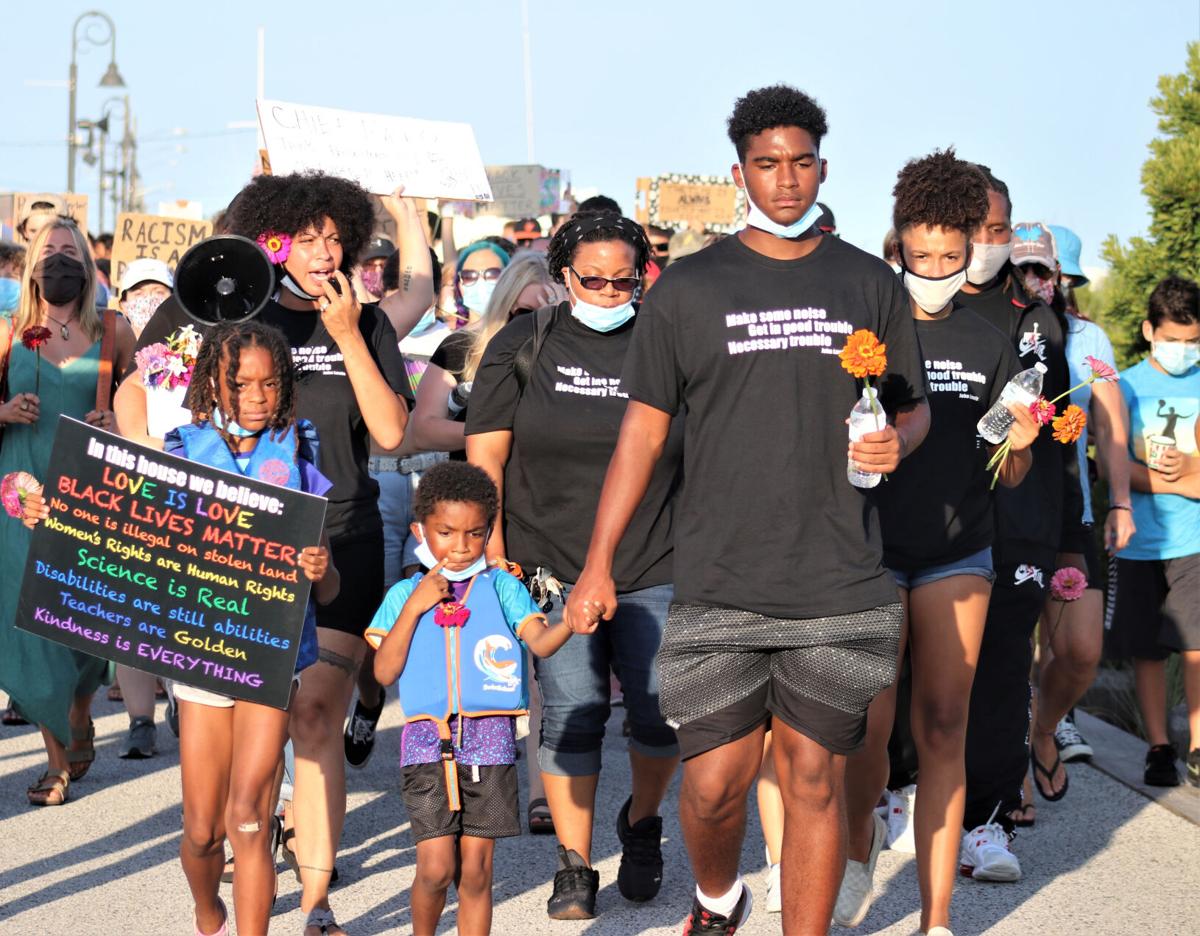 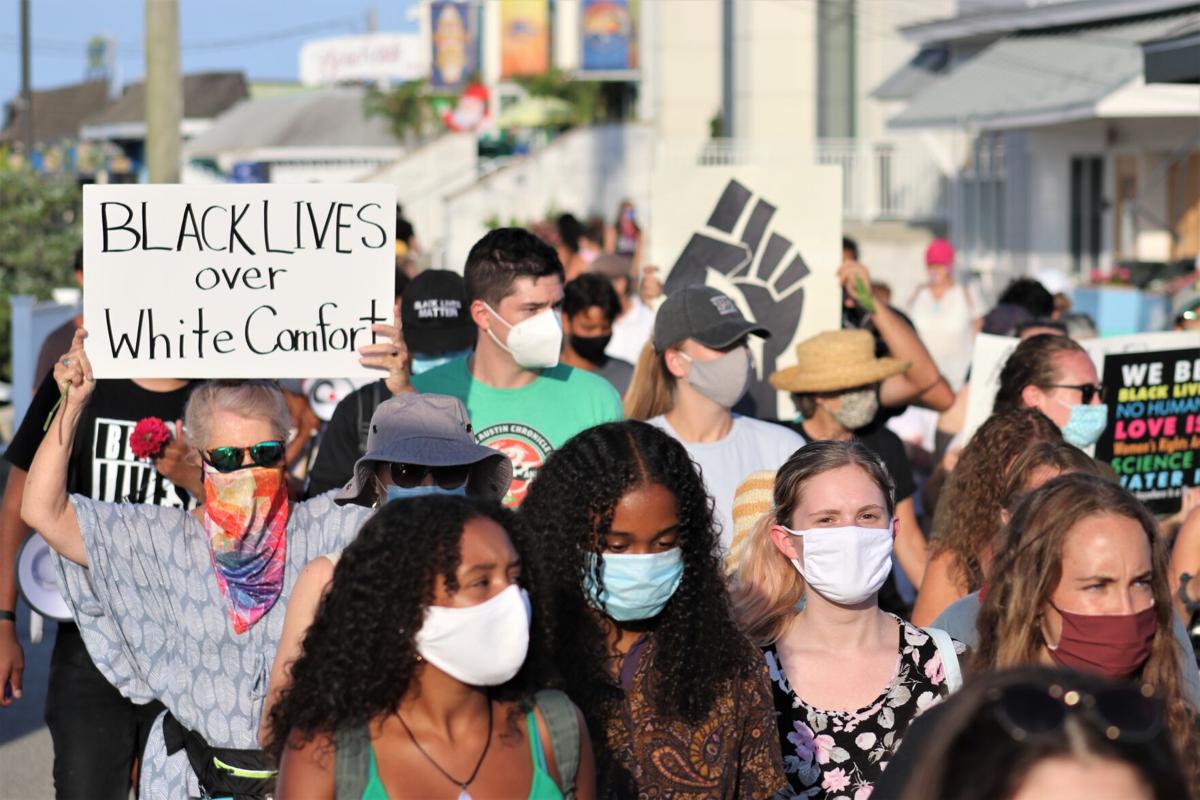 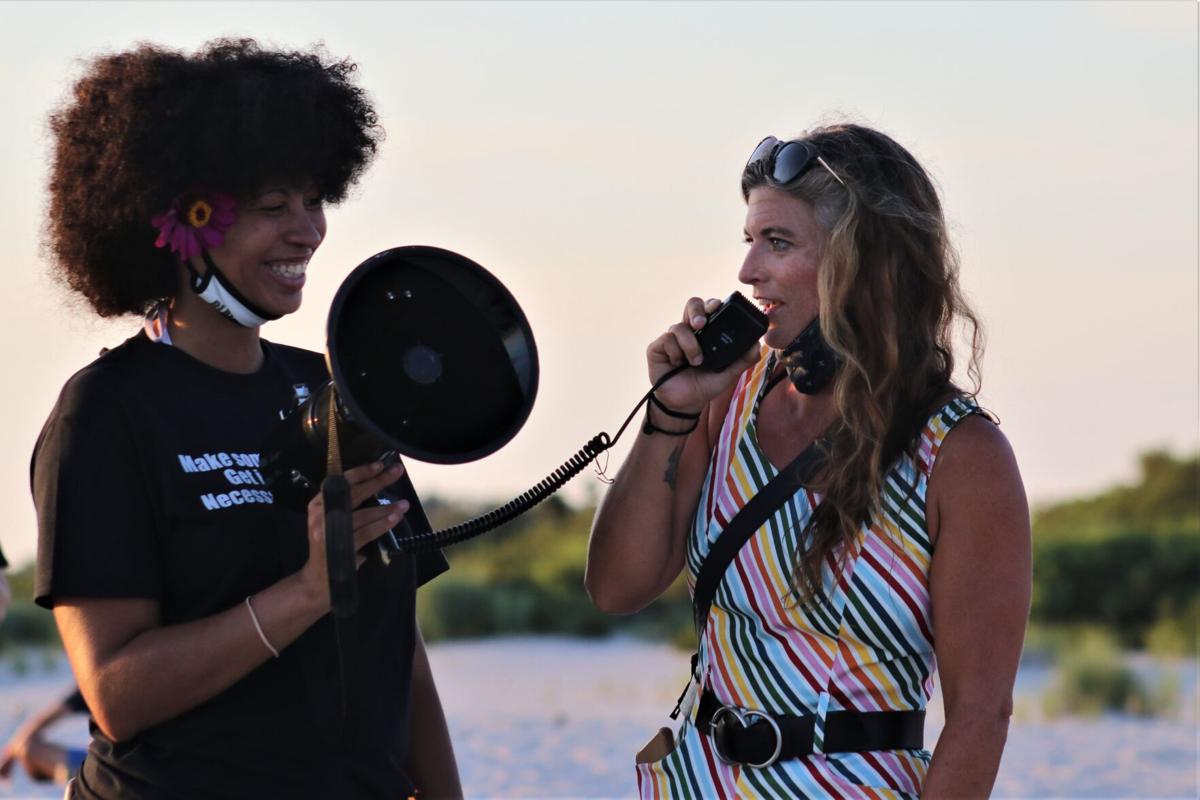 Sara Werner speaks to the crowd while Crystal Hutchinson holds the bullhorn at a Black Lives Matter event, in Cape May, July 25. The two women were the primary organizers of the event, which included a march on the Promenade and flowers thrown into the ocean. 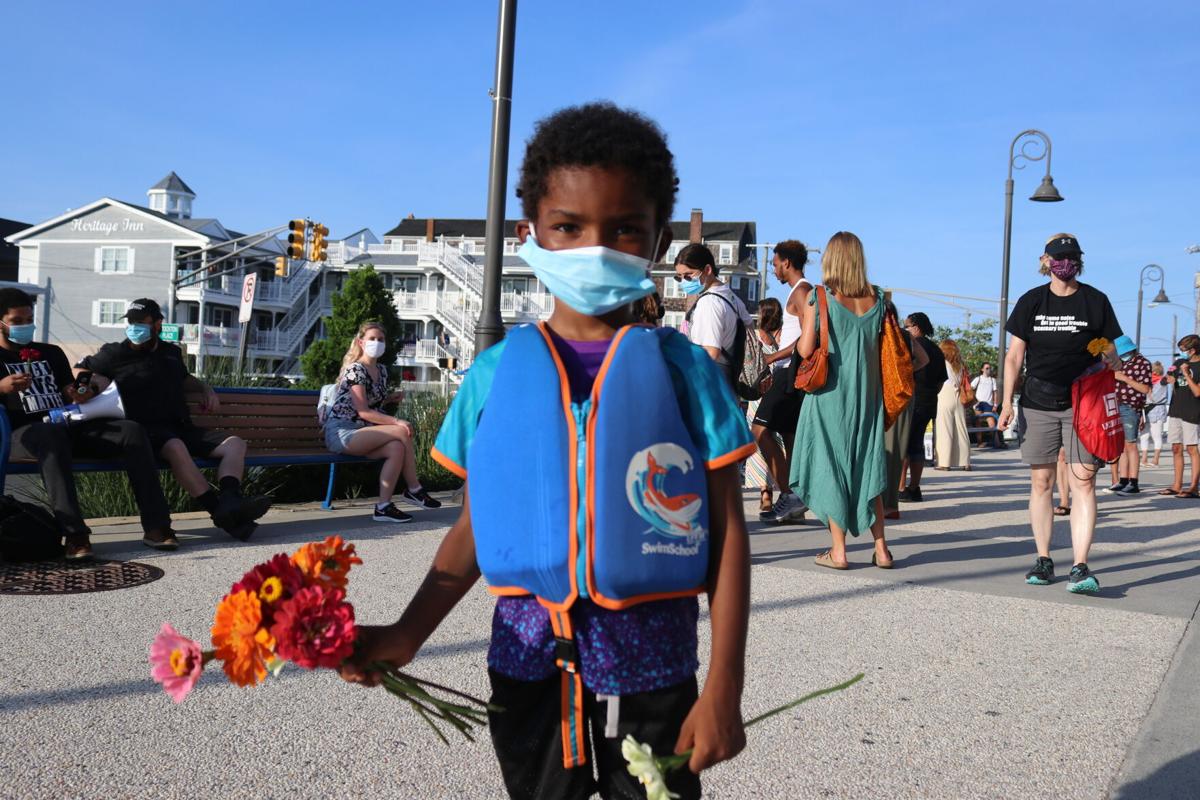 Jake Hutchinson, 5, hands out flowers at the start of a march against racism on the Cape May Promenade July 25. 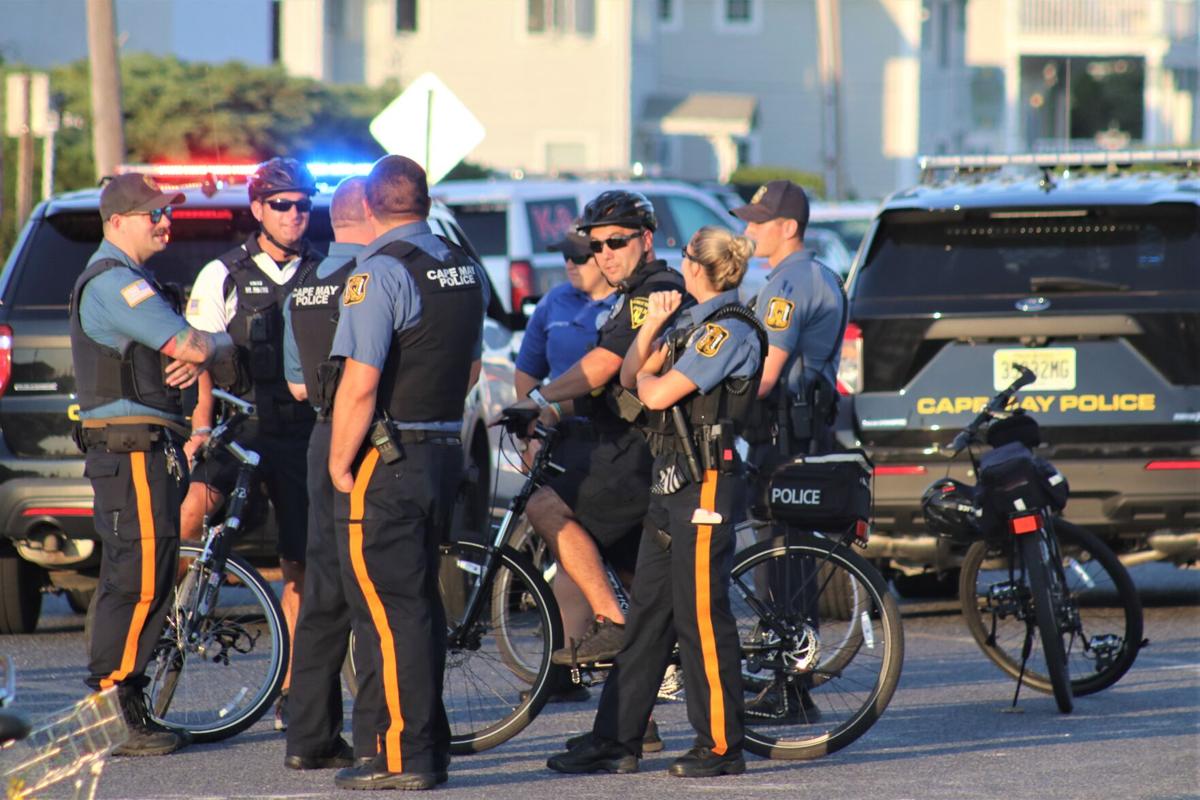 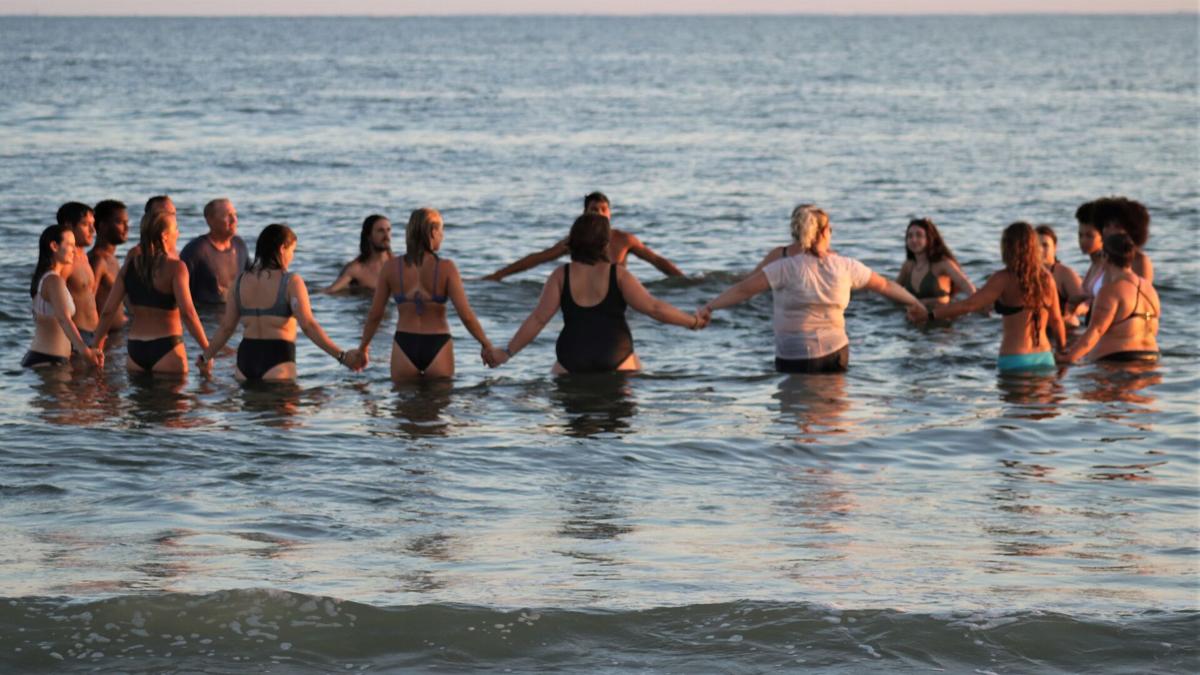 Some of the participants in a protest march, in Cape May, July 25 gather in a circle in the water as part of, what organizers described as, a memorial to lives lost to systemic racism.

Sara Werner speaks to the crowd while Crystal Hutchinson holds the bullhorn at a Black Lives Matter event, in Cape May, July 25. The two women were the primary organizers of the event, which included a march on the Promenade and flowers thrown into the ocean.

CAPE MAY – About 100 people marched along the Cape May Promenade July 25, the latest in a series of events decrying racial injustice.

Led by county resident Crystal Hutchinson, with a bullhorn, the crowd chanted “Black Lives Matter” and other phrases, and called out the names of Black Americans killed by police officers.

The march began in front of Convention Hall, in the early evening, and headed to the Cove, a section of beach at the far west of the city. There, the participants gathered in a circle to hear several speakers, who called for continued action against racism, followed by a walk to the water’s edge, where flowers were thrown into the waves. Organizers said that was in remembrance of the lives lost to systemic racism.

Several participants gathered, in a circle, in the water, also in a memorial gesture.

By the end of the event, it was getting near sundown, a popular time for the Cove, which offers dramatic views across the water to the Cape May Lighthouse in the distance.

Several people were on blankets or surfing in the water when the march arrived at the beach. Some turned to listen to the speakers, while many continued to enjoy the sunshine.

The speakers mentioned George Floyd, whose death while in police handcuffs on a Minneapolis street, in May, sparked outrage and demonstrations across the nation and around the world, including several in Cape May County. Derek Chauvin, the white police officer seen in a video kneeling on Floyd’s neck for close to nine minutes, was charged with murder.

Many march participants see Floyd’s death as a part of a pattern of police violence and disregard for Black lives.

Speakers also raised the ongoing protests in Portland, Oregon, and elsewhere, and the controversial federal response in that city, as well as the contentious rallying cry calling for defunding police.

She said police are often called to situations for which they are poorly equipped, such as mental health emergencies or domestic disputes.

“They’re not trained to handle that,” she said. “Defunding the police is reallocating funds to social workers and counselors.”

Cape May resident Sara Werner organized the event, with the participation of the Cape May County chapter of the National Association for the Advancement of Colored People (NAACP) and the progressive organization Indivisible Cape May County New Jersey. She described Hutchinson as instrumental in organizing the event.

Werner addressed the crowd last and was the only white speaker.

“Look at all you beautiful people. You’re here together on this beautiful Saturday night, in July,” she said. “Thanks for taking the time to speak out against systemic racism. We can end this. We can do this now. By looking at all your faces, I know we can.”

The event was organized as a peaceful demonstration, billed as a “liberation march in solidarity.” Advanced notice invited elected officials, business owners, and first responders to participate, describing it as a call for the liberation of Black, indigenous people and queer and trans people of color, expressed in the acronym QTPOC.

Participants were asked to wear masks, as protection from spreading the coronavirus. Participants kept the masks on through the march, although some took theirs down once they were able to spread out on the beach.

The paved promenade is often called the boardwalk, in Cape May. It runs along the beach for much of the town. There are a few businesses, but most are on the far side of Beach Avenue, where restaurants and bars have seating set up along the sidewalk this summer, behind a long stretch of concrete barriers to protect from traffic.

“We have chosen to walk down the boardwalk in (an) area with no businesses out of respect for our local small business owners, who are already struggling to return to normal from the pandemic,” reads a statement from organizers. “We have contacted the one business in close proximity to Convention Hall to inform them of the march.”

In a similar march along the Wildwood Boardwalk July 19, which included some of the same participants, several people yelled obscenities at the marchers, while others voiced support. In Cape May, passersby seemed far more welcoming.

A few people let the marchers know they disagreed with their stance. A few booed or shook their heads. One driver yelled, “Go home,” as she passed, although many of the participants live in Cape May or nearby. Many having dinner across the street raised their fists in support or chanted along, while some people walking the promenade or leaving the beach also joined the chants.

One restaurant along the route posted an apology on its Facebook page for a patron who staff members said yelled that Black lives do not matter. A man responded in a posted comment July 26 that he had instead yelled that the protesters were Marxists, and that he stands by that assertion.

Many of those participating wore matching black T-shirts with a quote from the late U.S. Rep. John Lewis, “Make some noise. Get in good trouble. Necessary trouble.”

At the start of the march, Hutchinson’s children handed out flowers to participants, so they could be thrown in the ocean at the end. Some participants passed out the flowers to supporters along the way.

There was a visible police presence, with Cape May police and officers from the Cape May County Sheriff’s Department nearby throughout the event. Officers on bicycles rode ahead of the march, while others in police vehicles drove the route.

Several officers gathered at the street end during the speeches, but the officers did not approach the participants.

During her comments, Werner thanked Cape May Police Lt. Dekon Fashaw by name for keeping the marchers safe, although she also teased him that the number of officers seemed like overkill. He was standing nearby at the time and could likely hear the comment.

At the close of the march, some participants sought to register people to vote at a table set up in front of the city gazebo at the Cove.

Thank you for Bill Barlow’s article on the Black Lives Matter march in Cape May July 25.