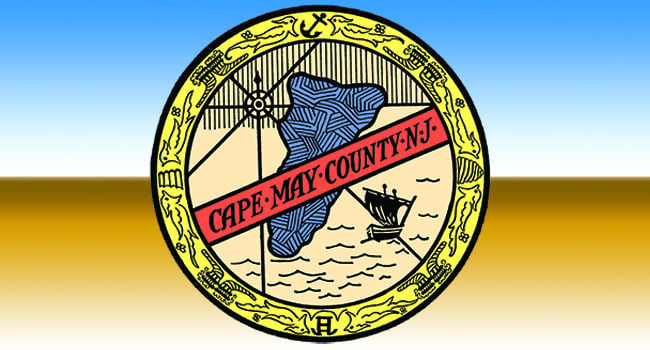 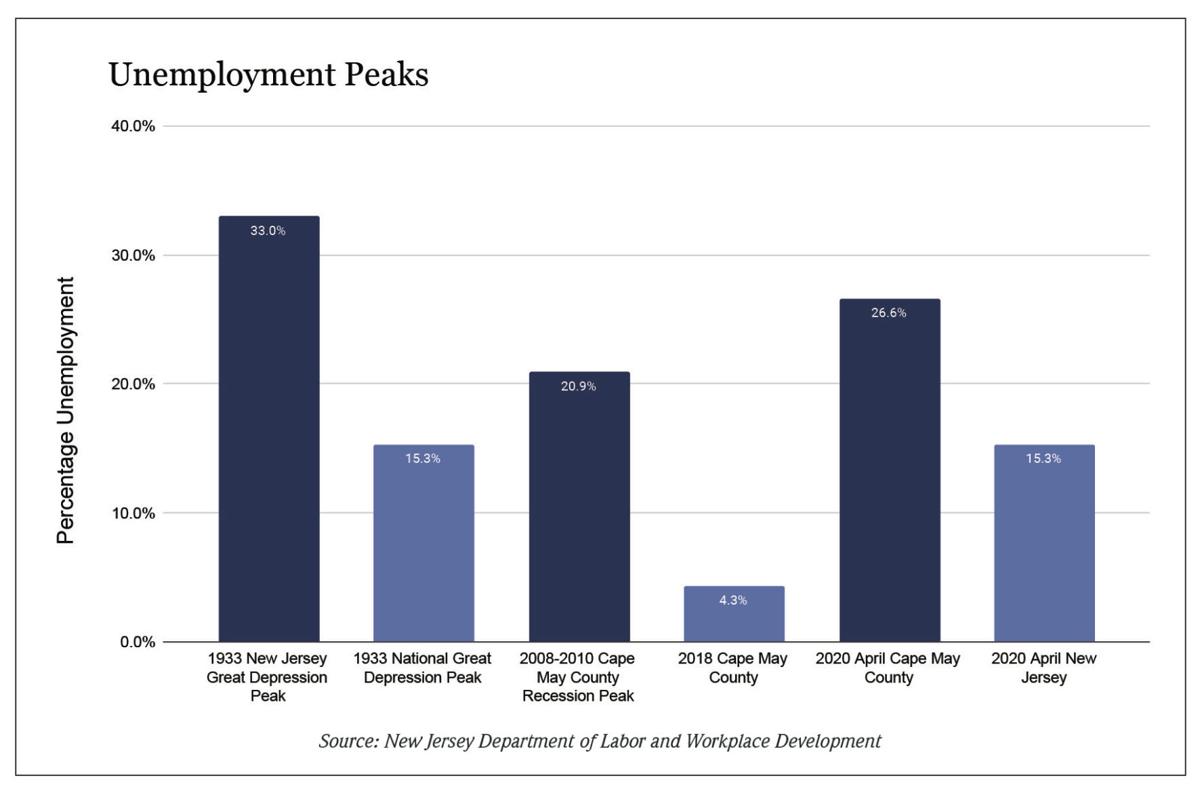 COURT HOUSE - In April, Cape May County unemployment hit 26.6%, a figure higher than the national unemployment peak in 1933, during the Great Depression’s peak. Figures released by the state Department of Labor and Workforce Development show the rate of unemployment across New Jersey’s 21 counties for April. The numbers indicate the economic devastation caused by the COVID-19 pandemic and the strategies used to combat it.

One other county, Atlantic, with its shuttered casinos, fared worse than Cape May County. Atlantic County’s unemployment that month hit 33.3%.

These are hardly imaginable numbers. They are as high as the highest points of unemployment in the worst economic depression in our history during the 1930s. They are higher than points reached during the recession that materialized as the Federal Reserve fought the Great Inflation battle of the 1980s. They are also higher than the nation’s experience during, what has become known as, the Great Recession of 2008 and 2009.

The unemployment numbers released in early June illustrate the impact of massive closures of the state’s economy beginning in late March. All at once, jobs were lost in retail, entertainment, gaming, recreation and restaurants.

The areas of economic activity termed nonessential represented the heart and soul of Cape May County’s tourist-based season economy. The executive orders were then followed by an April 4 administrative order that gave shore towns the authority to ban short-term rentals, which Cape May County did as a necessary response to uncertainties about the spread of the outbreak.

Those who never understood T. S. Elliot’s line in “The Waste Land” that “April is the cruelest month,” now had a new reference point, as the state lost 757,000 jobs in April, with a third of them in leisure and hospitality. The  state’s economy ground to a halt. The economy of Cape May County hit a wall.

The impact came as the county would normally be busy hiring seasonal workers, preparing for Memorial Day, the traditional start of summer. Many of those workers, annually working seasonal jobs,  were unemployed for months, waiting for the resurgence in hiring. The Cape May County economy, dependent on seasonal spending patterns of shore visitors and second homeowners, continues to face handicaps as it cobbles together capacity restricted retail, outdoor-only dining, still-closed bars and widespread cancellation of summer events, including traditional Memorial Day and Independence Day activities into a summer experience for which visitors come.

Since the Great Depression, high points in unemployment have occurred in October 2009, at 10%, and caused by the home mortgage security bust, and in November 1982, at 10.8%, resulting from the recession that accompanied the Federal Reserve’s war on inflation. A comparable figure today is the recent national unemployment peak of 14.7 %, beat by New Jersey’s 15.3% for April.

What is known about how the local economy fared in one of these other recessions and how long it took to rebound in terms of achieving the county’s normal cycle of employment?

In the 2008-2010 recession, a painful one for a local economy tied to housing values, the county unemployment was at 13.9% when the national peak was hitting 10% in October/November 2009. Locally, the unemployment peaked in February at 20.9%, a high point for the two decades of data on county monthly unemployment available from the Federal Reserve Bank of St. Louis. That high was still 6% points lower than where the county currently finds itself.

One difficulty in measuring lingering unemployment in the county is the cycle nature of employment in a seasonal economy. It is not unusual for the county to have double-digit unemployment for part of each year, with high points in January and February, but those high points don’t typically approach 26.6%, especially in April and May.

The best way to look at how long it took to recover from the 2008-2010 recession is to consider the unemployment rates in the county in August, the month when employment is at its peak and when Cape May County’s numbers are generally the best in the state.

Historical data shows that a “normal” August unemployment number for the county is between 4% and 5%. In August 2008, before the impact of that recession, unemployment in the county was at 4.8%.

The bottom line was that the August unemployment didn’t return to its normal range until 2017, at 5.4%, and 2018, at 4.3%. The shore’s economy grew over that period and employment improved each year, but recovering from the hit caused by that recession took years in terms of overall unemployment rates in the county. That translates into real pain for real people.

The COVID-19 pandemic led to 38.6 million workers across the nation filing claims for unemployment, 1.1 million of those in New Jersey. In March, the state’s unemployment number was at 3.8%. In April, it stood at 15.3%.

The U.S. Bureau of Labor and Statistics (BLS) reported that unemployment fell to 13.3% in May and represents, according to the BLS report, “a limited resumption of economic activity that had been curtailed in April and March.” There are academic and political disputes over what the May 13.3% figure means, but what it doesn’t mean is an early end to unemployment pain in this county.

BLS data shows that nationally the category of jobless workers where unemployment fell in May were those who had been without jobs for less than five weeks. Other categories increased, including those jobless for over 27 weeks, which is the category for many summer seasonal workers.

Another indicator of economic disruption is that the number of persons who usually work full-time but now can only find part-time work increased nationally by six million since February.

In the Great Recession, the national unemployment peaked in October 2009. The economy returned to the level of pre-recession unemployment six years later, in November 2015.

The data for the same recession locally showed back-to-normal August employment levels took most of a decade.

One recent study, by the University of Chicago Becker Freedman Institute for Economics, sees the COVID-19 induced economic downturn as a prelude to a massive reallocation of labor (https://bit.ly/2BLM2OW). The study estimates “that 42 percent of recent layoffs will result in permanent job losses.”

An article in the March 29, 2020, Wall Street Journal by Ruth Bender and Matthew Dalton asserts that “The coronavirus is forcing the fastest reallocation of labor since World War II,” underscoring an argument getting more attention that the nation faces significant reallocation of labor and resources rather than simple recovery of an old normal.

The Chicago paper calls attention to the five-plus years that it took to recover 8.8 million jobs following the Great Recession, while it makes the point that policy prescriptions may need to be different if the nation is facing a “reallocation shock.”

This is all relevant for Cape May County because the county economy can only recover as fast as the national and regional economies recover. A tourist economy depends on levels of available disposable income, on readiness to travel, and on a perceived sense of relative well-being.

No one can predict the recovery period from the COVID-19 induced economic disruption, the variables are too many and the data too limited. What history can teach is that recovery could take time and be much more gradual than anyone would like.