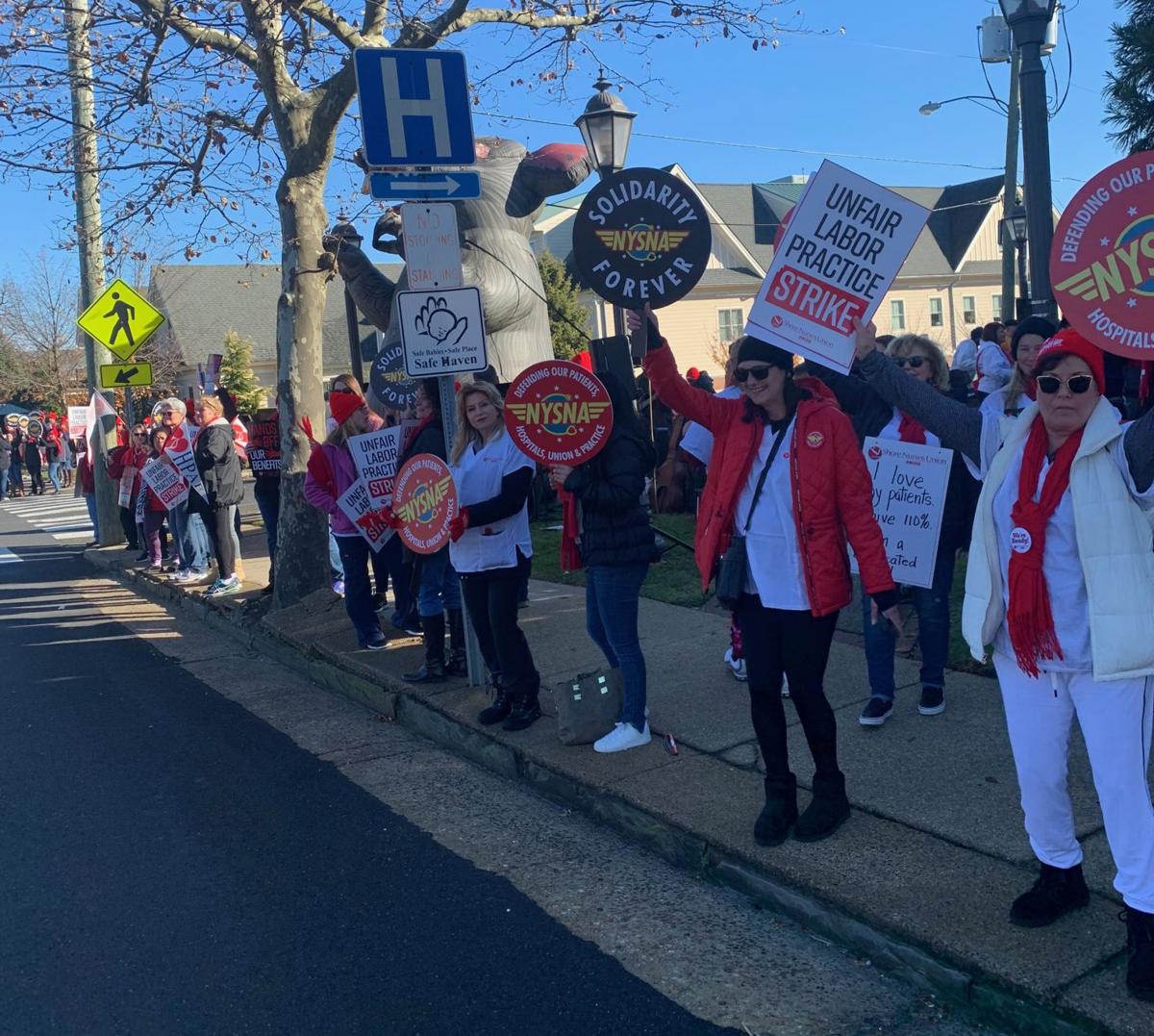 Protestors line Shore Road, near Medical Center Way, in Somers Point, Nov. 26, as the nurses at Shore Medical Center are on a one-day strike after 11 months of negotiations have proved unfruitful in their attempt to reach a new collective bargaining agreement with the hospital. 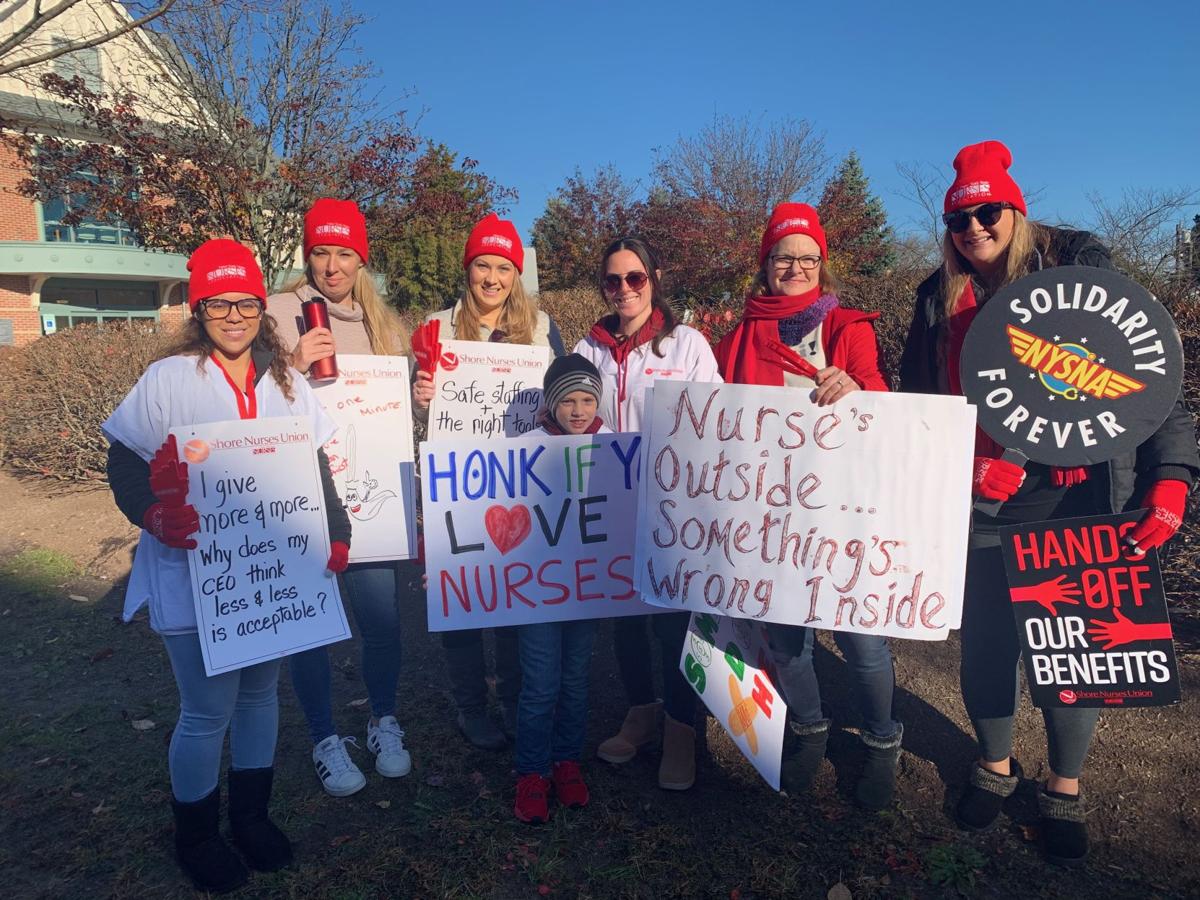 Critical care nurses from Shore Medical Center pose with their signs during the strike Nov. 26. 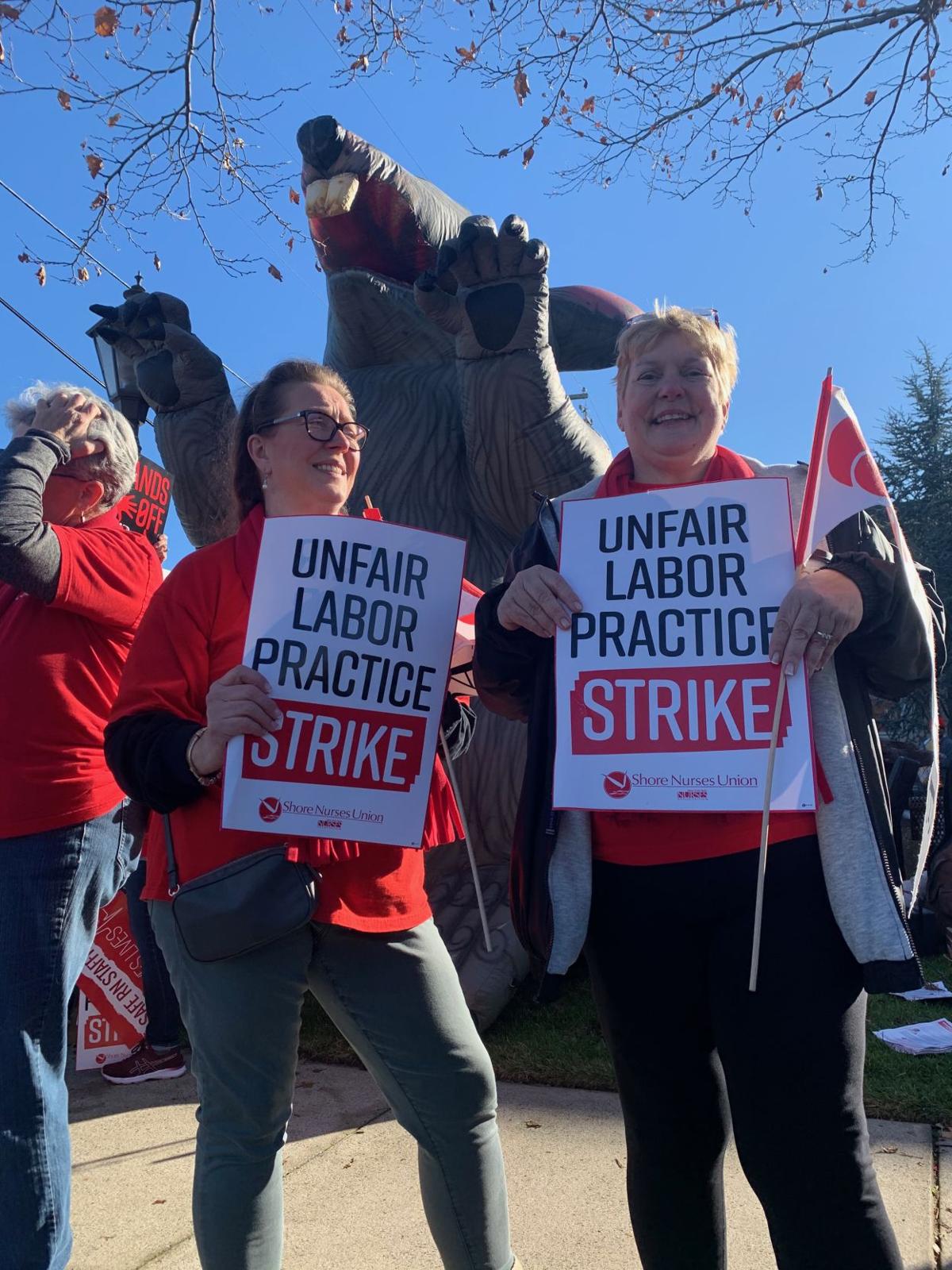 Health Professionals and Allied Employees (HPAE) Local 5138 President Anna Pona, left, and Vice President Sue Kaszuba, right, show their solidarity with, and support for, the nurses at Shore Medical Center during their one-day strike Nov. 26. Pona and Kaszuba recently went through negotiations for their own collective bargaining agreement with Southern Ocean Medical Center in Manahwkin, and received support at their own picket from Shore nurses.

SOMERS POINT - A sea of striking nurses lined Shore Road, outside Shore Medical Center, in Somers Point, Nov. 26, many holding signs and some chanting on bullhorns, to the beat of a live band set up below a giant, inflatable rat.

After 11 months of negotiations since their last contract expired in December 2018, the hospital and the New York State Nurses Association (NYSNA), which represents Shore’s 320 union nurses, failed to reach a new collective bargaining agreement (CBA).

The one-day strike was announced by the NYSNA, with notice given 10-plus days in advance. Eric Smith, field director for the nurses’ union, called the action “a last resort.”

In emails obtained by the Herald, the hospital told union nurses not to return to work until Nov. 30, as it would, in turn, lock them out for three days. A team of temporary, fully-licensed replacement nurses were to be in place until then.

“The hospital is giving the nurses absolutely no respect,” said Dottie Rudert, co-president of the Shore Nurses Union and an operating room nurse at Shore. “We have a lot of pride in taking care of our patients and the hospital is just being evil.”

The hospital was operating, as usual, Nov. 26, in all departments, according to Shore spokesman Brian Cahill. Multiple sources inside the hospital, speaking on the condition of anonymity, because they were not authorized to comment publicly on the matter, confirmed that operations were running smoothly during the strike. One source called the replacement team “total pros.”

The strike comes as frustrations mount with the hospital attempting to make cuts to nurses’ health insurance benefits, medical leave and retirement benefits - including 401k and pension - according to NYSNA officials.

Union officials are frustrated that the hospital won’t renew the former agreement, despite the fact that Shore reported $27 million in profits during the two years under the prior CBA, according to Smith.

The union reported near 100% participation in the strike, with two of the approximately 10 union nurses who crossed the picket line and worked, doing so with the blessing of the NYSNA, since they are in the final two weeks of their employment, and union attorneys advised them that striking would have voided their severance benefits.

“The union is strong at Shore Medical Center,” said Lisa Ruiz, the NYSNA representative at Shore. “The solidarity in the community is palpable.”

Hospital President Ronald Johnson declined the Herald’s request for an interview, but the hospital issued a statement through Cahill. In it, the hospital calls the strike “disappointing,” and points out that Shore’s full-time nurses receive above-market benefits, annual wage increases, and “a total compensation package worth approximately $90,000 per year.”

Smith said that the hospital has not declared any financial stress or hardship throughout the entire process, so the nurses shouldn’t have to accept a CBA that offers them less than their prior deal.

“This begs the question, why are they seeking millions of dollars in cuts if there is no distress and there is no hardship,” Smith said. “The ball is in their court to say $27 million in profit is enough.”

In his statement, Cahill said that Shore has “the highest regard for the contribution of our nurses and will welcome them back when shifts are available. We will continue to negotiate with the union in good faith to reach an agreement that serves the interests of the medical center, our patients, and our outstanding nurses.”

The demonstration was scheduled to conclude after sundown, and the union advised all scheduled nurses to report for work Nov. 27-29, despite the hospital’s intention to lock them out.

Nurses are on strike at Shore Medical Center in Somers Pt. this morning after their union and the hospital have failed to come to an agreement on a new collective bargaining agreement for the last 11 months. Replacement nurses are in place. Story coming for @HeraldNews pic.twitter.com/jkYUP741VP

“We have an employer who is putting profit above patients, and that is an unfathomable thing to think of as a nurse,” said Smith. “It doesn’t compute.”

Union officials have said their communication line is open should the hospital decide to reach out for negotiations.

“Patient care continues to be our top priority,” said Cahill.