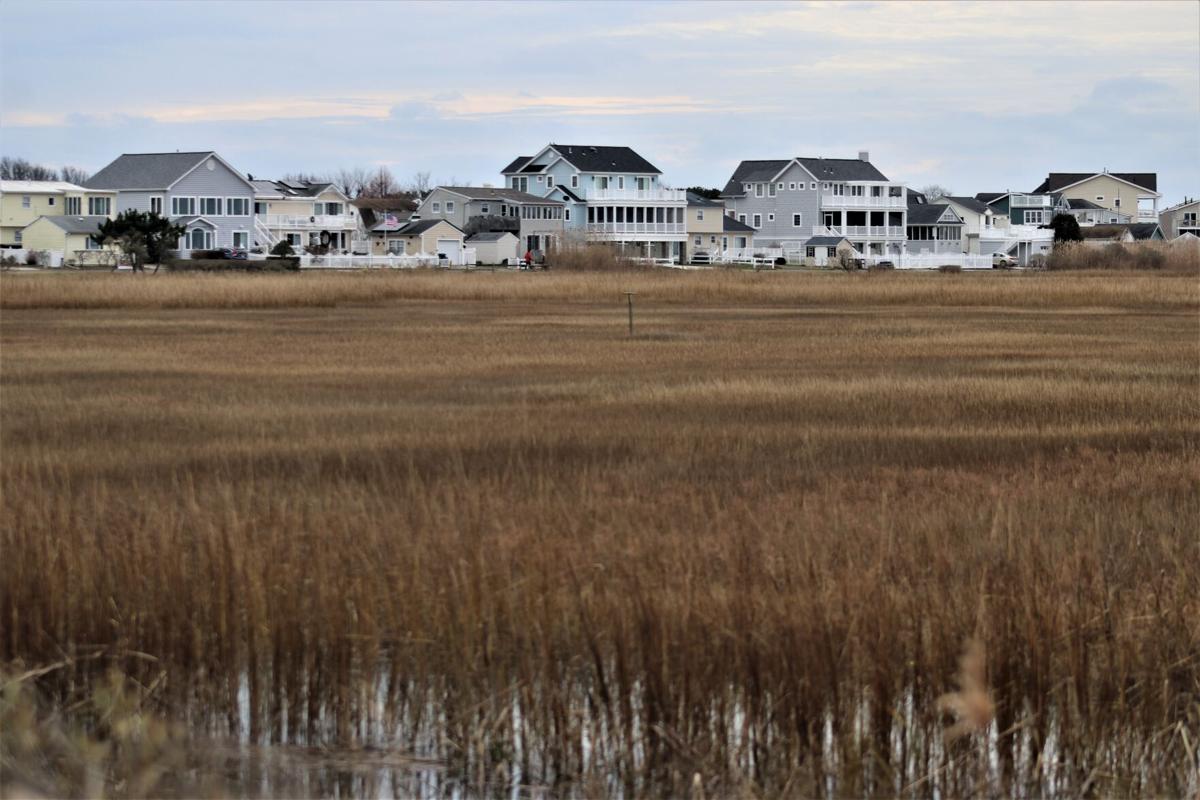 The Ocean City Homes neighborhood sits close to the marsh in the south end of the city, built on filled wetlands decades ago. New Jersey claims ownership of every spot where tidal water once flowed, here and in similar neighborhoods throughout the state, which can mean an expensive and time-consuming process to resolve for homeowners. A property owner is trying to speed the process to 90 days instead of two years or more. 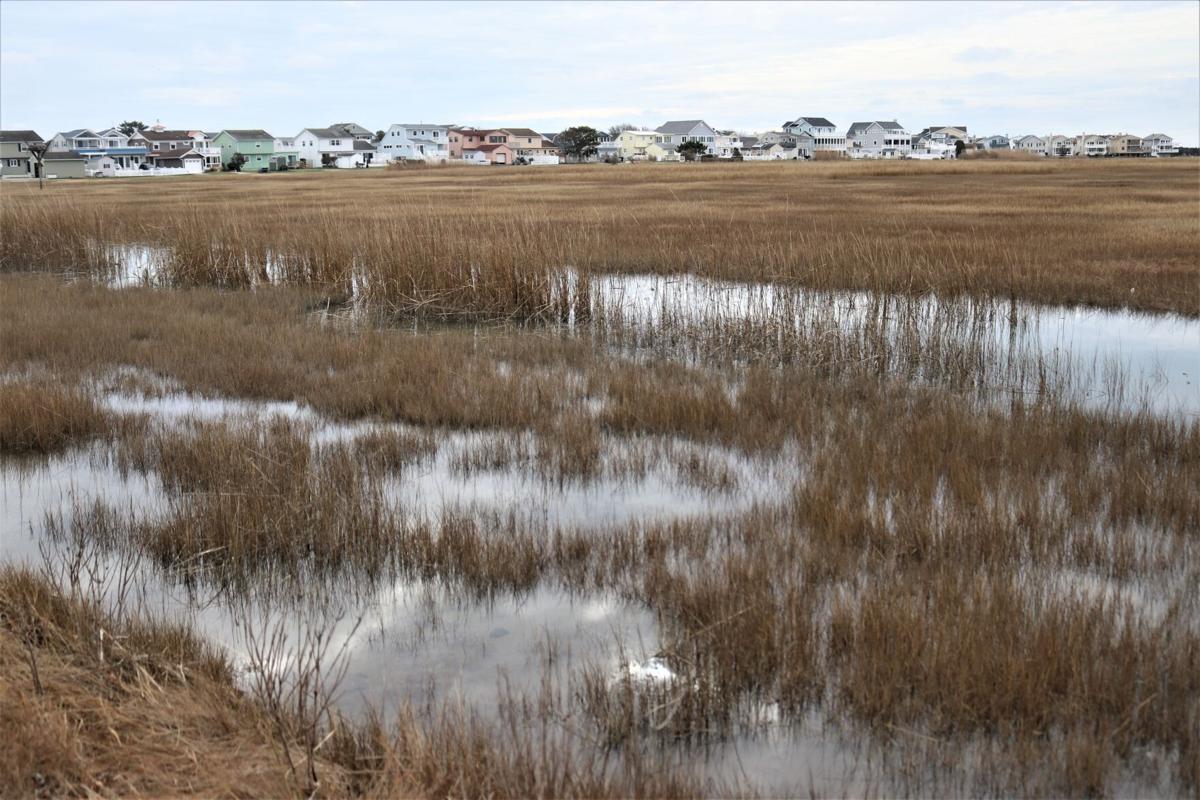 The Ocean City Homes neighborhood sits close to the marsh in the south end of the city, built on filled wetlands decades ago. New Jersey claims ownership of every spot where tidal water once flowed, here and in similar neighborhoods throughout the state, which can mean an expensive and time-consuming process to resolve for homeowners. A property owner is trying to speed the process to 90 days instead of two years or more.

OCEAN CITY – Paul Bade isn’t trying to scrap New Jersey’s riparian grant process, even though he may want to.

“I try to set my sights on something that can actually be accomplished,” he said, in a recent interview. He’s launched a campaign to speed a system that can take years to grind to a resolution, asking for a state law that would set a limit of 90 days for claims to be reviewed.

Otherwise, the state would automatically issue a declaration of “no interest” in the property.

An online petition is drawing interest, and state Assemblyman Antwan McClellan (R-1st) is on board. The state could not afford to do without the revenue brought in by riparian grants and leases, McLellan said, in a recent interview, but some reform should be possible.

“My hope is that I can introduce some legislation that will shorten the timeframe. It’s taking entirely too long for these things to get resolved,” said McClellan, an Ocean City resident.

In Bade’s case, he does not know how long it will take him to resolve the matter, nor how much it will cost him. He first heard about riparian grants from neighbors in the Ocean City Homes development in the south end of the resort, recounting delays in settlement, canceled property sales, and lengthy waits to get clear title to lands.

A 12-member Tidelands Resource Council oversees the process, along with the state Department of Environmental Protection (DEP) and the Bureau of Tidelands Management. It’s difficult to find exact figures, but state budget documents posted online put the tally at several million dollars a year raised from grants and leases.

The little-known practice allows the state to claim ownership of any land where tidal water flows or used to flow. In practice, that means the state can charge homeowners for the rights to properties where tidal streams were filled decades ago.

That’s the situation for Bade’s Ocean City home, left to him in a trust when his mother died, in 2019. According to Bade, he won’t know how much it will cost him to get a clear title of the house until the matter is resolved, which may take years.

He said he’s not trying to get out of paying the money. He wants there to be a timeframe imposed to keep the issue from dragging  for years. His petition proposes a 90-day limit for the state to review an application for a riparian grant and establish the value.

Otherwise, he said, the value continues to increase, along with property values, as years pass, with the owner in limbo.

According to Bade, who lives in Maryland, New Jersey is the only state that interprets the laws to require payment for land where water used to flow, sometimes many decades after the fact and after the property potentially changed ownership multiple times.

The rationale goes back to English common law, which has held since medieval times that there is a public right to access tidal lands, like beaches. According to New Jersey, the king legally owned all land where saltwater flows. At the time of the American Revolution, that ownership passed to the public, as embodied by the state.

In most cases, this has meant homeowners must pay the state to place docks along the bay and that there is a public right to beach access, but starting in the 1980s, the state increasingly began to assert that right applied to any land where water used to flow, for instance in shore town neighborhoods, where marsh was filled for development throughout the 20th century.

“I think the whole thing’s a scam. The state used to encourage people to fill in the ground. They wanted the development,” Bade said.

In the Ocean City Homes section, as with several other neighborhoods on the barrier island, a section of marsh was filled in during the 1960s to create room for new building lots, jutting into the wetlands in a multi-block rectangle. A map showing the historic streams and inlets in the neighborhood shows them twisting and winding across dozens of residential lots.

According to Bade, the stream that once crossed his long-dry property is shown in documents from 1868, but by 1897, it was blocked off by a railroad line that crossed the marsh, at 51st Street to Upper Township.

In most cases, it’s the title insurance companies that end up paying, a cost ultimately reflected in the rates. Other times, it is applied to family properties that have not been sold for decades, as is the case for Bade.

For many owners, the first they hear of a riparian grant comes in the form of a notice from the state that it is required. The tens of thousands of dollars Bade expects to owe is after a “good faith” discount from New Jersey on properties bought before 1982.

Bade launched a Facebook page, as well as an online petition, which can be found at  http://bit.ly/38aHlf6. So far, 34 people signed the petition.

On the Facebook page (http://bit.ly/2KQAQ8F), a 77-year-old woman wrote that a mistake by a surveyor when she bought her home, in 2007, means she can't sell it without a tidelands grant. She could put money into escrow and proceed with the sale, she said, but it would be far more money than she has.

A riparian claims lawyer told her it would be massively expensive to fight it, she said, and the state almost always wins. That means she is waiting on her application before she can do anything.

“I hope my savings will last as long as I,” she wrote.

Bade’s petition asks Gov. Phil Murphy to direct the DEP to review applications and provide a recommendation to the Tidelands Resource Council within 90 days of a completed application, and for the council to act at its next meeting, barring emergencies.

“It’s not just in Ocean City. A lot of places are affected by this. The shore communities suffer,” McClellan said. “It’s unfortunate.”

“I actually think the whole thing should be scrapped, but it’s been going on so long that there’s no way that will happen,” Bade said.