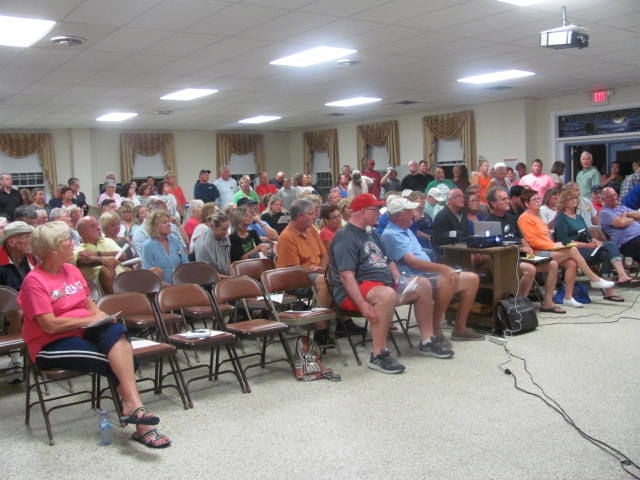 Over 200 borough residents and second-home owners attend the first meeting of the Concerned Taxpayers of West Wildwood. 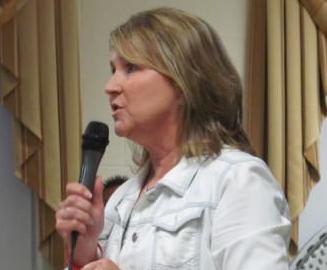 Over 200 borough residents and second-home owners attend the first meeting of the Concerned Taxpayers of West Wildwood.

WEST WILDWOOD ─ "We are the voice of the people," Trish Sinnott said Aug. 31 before over 200 borough residents and second-home owners. It was the formation of the Concerned Taxpayers of West Wildwood (CT WWW) and its first meeting.

The Concerned Taxpayers of West Wildwood came together in response to an alleged lack of honest and transparent municipal leadership.

Since the awarding of the $1.7-million settlement to Police Chief Jacquelyn Ferentz, several residents and second-home owners expressed concerns to Mayor Christopher Fox and commissioners, asking why Ferentz was reappointed at the caution given by Atlantic County Municipal Joint Insurance Fund (JIF).

Fox has emphasized, "The commissioners did the right thing." Fox added the borough followed the advice of its attorney, Joseph Barbone, and other attorneys during the legal process stretching back to 2012.

If Ferentz, 48, chose to have the full amount, the borough would seek a bond from the Local Finance Board in Trenton.

CT WWW members claim that after leaving "disgruntled" after commissioners' meetings, many felt "misled" by the borough administration.

As expressed in a recent statement by CT WWW, “The Ferentz lawsuit has awakened a concern from the most trusting homeowners and triggered a fear about all decisions, past and present, being made by the current officials. Confidence in their leadership and governing skills is at an all-time low.”

Sinnott remarked that anger could be "a good thing" if properly channeled into action; however, Sinnott and fellow members desired their actions to inspire and help bring positive changes to local politics.

"Advocating responsible government at the local level" comprises part of the group's mission.

According to the full mission statement, the CT WWW wishes "to enhance the quality of life in our borough through the enforcement of transparent rules and covenants, management of common areas, support of initiatives that strengthen bonds among residents, and investment in capital improvements that benefit the greater good."

Along with her husband, Sinnott fosters strong feelings for West Wildwood, having family ties and memories of happy, bayside summers.

The borough's "back-bay charm" is dear to Sinnott's heart. Though Pennsylvania residents, the Sinnotts call West Wildwood their summer home.

A PowerPoint presentation unfolded and explained the various challenges and options before the CT WWW.

First, an advisory council will be created. Its seats will be filled by individuals bringing financial, legal, administrative, and other perspectives to the table.

"We are a great island," Sinnott said. "We are capable of great things."

Second, the CT WWW is looking for a way to remove the current administration based on three options: recall petition, voting the commissioners out of office in 2020, or filing a complaint with the Local Finance Board.

Several attendees asked why Fox, along with Commissioner Scott Golden and Cornelius Maxwell, would reinstate and promote Ferentz after the JIF's recommendation.

One resident said the administration should be charged with "criminal negligence."

However, formal charges cannot be filed unless a criminal act is discovered by investigators and intent is proved. Members plan to submit letters to the Cape May County Prosecutor's Office.

Regardless of any possible legal action, Ferentz and her attorney will still receive their monthly payments. The payment schedule allocates approximately $5,040 to be paid each month. According to the payment schedule, Ferentz's last payment will be in 2035.

Third, financial challenges also face the CT WWW; a recall election, once approved by state, would cost $25,000 to rent the voting machine, and filing a civil complaint would also cost taxpayers.

According to one CT WWW member, the movement is not "divisive" but "inclusive" and wishes to work with borough officials.

Fox has maintained in previous statements "We (borough) did what is best by law."

The 2018 tax increase (equaling .6 cents on every $100 of assessed value) brought no pleasure to the administration.

Sinnott concluded by restating the goal to "refresh small-town charm on the back bay."

"We (CT WWW) are in the evolution stage," Sinnott said.

As an Eagles' football team cheer filled the room, second-home owners and residents pledged themselves anew to formalizing the movement and bringing change to West Wildwood.

The Herald contacted borough hall Sept. 4 for comment on the newly formed CT WWW, but no comment was given.