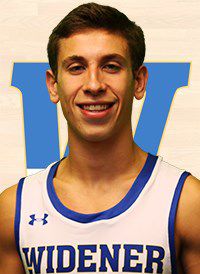 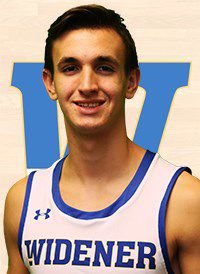 Laverty, a senior guard and forward, listed as a History/Secondary Education major, started in all 27 games and led the team in points per game (14.1), assists (71), three-point shots (59), and rebounds (174). He also recorded 27 steals and five blocks. Laverty was the Mid-Atlantic Conference (MAC) Commonwealth Player of the Year.

Holden, a sophomore guard, listed as a Business major, started in all 27 games and averaged 8.4 points per game. He had 68 assists, 58 rebounds, and 16 steals.

Long, a first-year guard, also a Business major, competed in five games and had five rebounds and two blocks.

The Pride tallied a 19-8 record, with a 10-5 mark on their home court. In the MAC Commonwealth, they posted a 12-4 record. Widener advanced to the MAC Commonwealth Tournament semifinal round, where they were defeated by Lycoming, in a game held in Chester, Pa.

Other local athletes joined them in having successful seasons.

MacKenzie McCracken (Wildwood High School), a junior Exploratory major, was on Widener's women’s basketball team. She started in 25 games and averaged 3.4 points per game, with 72 rebounds. She had 18 assists, 14 steals and two blocks.

They advanced to the MAC Commonwealth semifinal round, where they were defeated in overtime by Albright, which was another game played in Chester, Pa. From there, Widener competed in the NCAA Division III Women’s Basketball Championships, where they lost to Christopher Newport in the opening round.

The Shorewomen acheived 10 wins, with an 8-4 record on their home court. In the Centennial Conference, they had seven wins.

The Pride placed second in the team scoring at the MAC Championships, held in Reading, Pa.