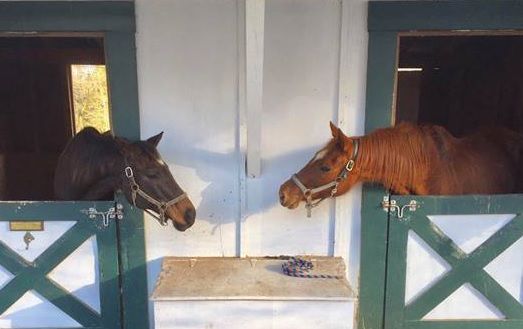 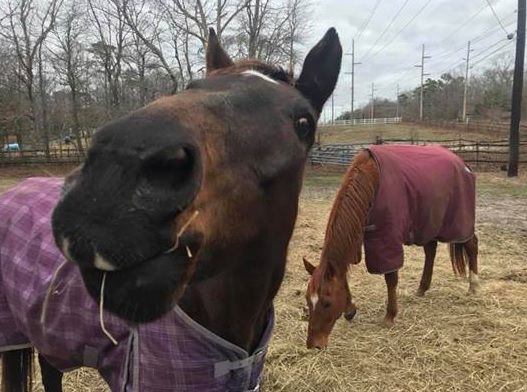 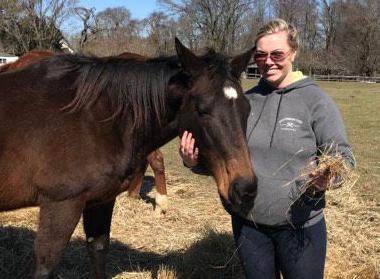 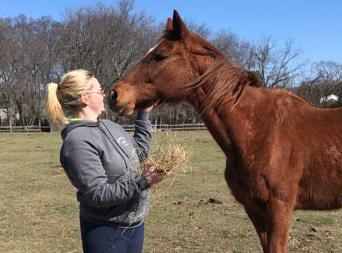 ERMA – Danielle Amenhauser never had a horse of her own. The only animals she rescued before were her dog and a stray cat.

But when friends told her two horses were abandoned at a ranch on Route 9, she had to act.

Over the winter, Rob and Liz Ross noticed two mares at an Erma ranch near their home that were growing thin and not being maintained. The Rosses previously fed them carrots as treats, but soon those carrots became their only meals.

“The poor horses had been left to die pretty much,” said Amenhauser, a 23-year-old waitress, and hair-bow designer.

When the Rosses told Amenhauser about the starving horses Feb. 24, Amenhauser sought to find out whose they were. She posted on Facebook, and someone responded with the name, phone, and address of their owner.

No one answered the door or phone, but she tracked down the ranch's owner and got permission to be on the land to care for the horses.

Amenhauser stayed with the horses for three days to see if the owners would come, but they never did.

“I was there for at least 12 hours throughout the three days,” Amenhauser said. “They ate three times a day when I was there caring for them, and they always had water.”

In search of the owner, she called a real estate agent whose sign was on a vacant house in front of the ranch. She hoped for a connection to the property. The person did not know the horses’ owner but did know of a horse rescue.

Abby Revoir Sykes of Starfish Equine Rescue brought hay and jugs of water, and upon seeing how thin the horses were, she, her veterinarian and the real estate agent all called American Society for Prevention of Cruelty to Animals, which in turn contacted Ocean View-based Shore Animal Control. That entity serves eight municipalities in Cape May County including Lower Township.

Shore Animal Control posted a notice stating that if the horses’ owner did not appear within the next 36 hours, they would be seized and sent to Sykes’ Star Hollow Stables.

The horses’ owner found out about the notice, Amenhauser said, and the next day they were signed over. The owner’s reason for neglecting the horses was that she was sick, Amenhauser said.

To make their malnourishment appear age-related, the owner claimed they were in their 20s when they were actually 13 and 15, Amenhauser said. Horses live about 25-30 years.

“She was trying to not get in trouble for abandoning them,” Amenhauser said. “But like I told her, ‘Then why didn’t you call someone for help?’”

The mares were two of approximately 170,000 unwanted horses in the U.S., according to the Unwanted Horse Coalition.

“Luckily I had two stalls open when animal control asked me to come pick them up,” she said.

The horses' teeth were damaged from “cribbing,” the action of biting on wooden fences in response to digestive pains.

“Both were full of worms and sand,” Sykes said.

The vet floated their teeth and began alignment, and they haven’t cribbed since, Sykes said.

Her father hooved them and the mares started their spring vaccinations April 4.

Star Hollow held a naming contest, and the winning names were Pandora for the bay mare and Ember for the chestnut mare.

“These horses took a village, to say the least,” Sykes said. “They have a very long road to recovery until they can be adopted.”

After they regain their weight, Pandora and Ember will be evaluated “under saddle,” Sykes said.

“If they do get put up for adoption, they would be only available together and with a very strict contract, and background checked,” she said.

Sykes’ biggest concern for the abandoned horses was the owner taking them to an auction house where they would be sold and slaughtered for meat.

She had rescued slaughter-bound horses before, she said.

“That’s what I was worried about when I heard about them,” she said. “If the owner needed fast cash, I thought maybe they could be in danger, so I wasn’t sleeping well until I had them on my farm in my care.”

“If I could afford them, I’d have them,” she said.

Sykes is paying for their care herself and is accepting donations to Starfish Equine Rescue to cover costs.

“Their vet, farrier, feed, and supplies bills are already thousands,” she said.

“None of this could happen without the support of donations from our amazing community,” Sykes added.

“Gillian and Dan Higman are sponsoring the ‘girls’ outstanding bills that donations won’t cover they are taking care of,” she added.

Amenhauser said helping to rescue Pandora and Ember was one of her proudest accomplishments.

“I am not a veterinarian, I just am a big animal lover,” she said.