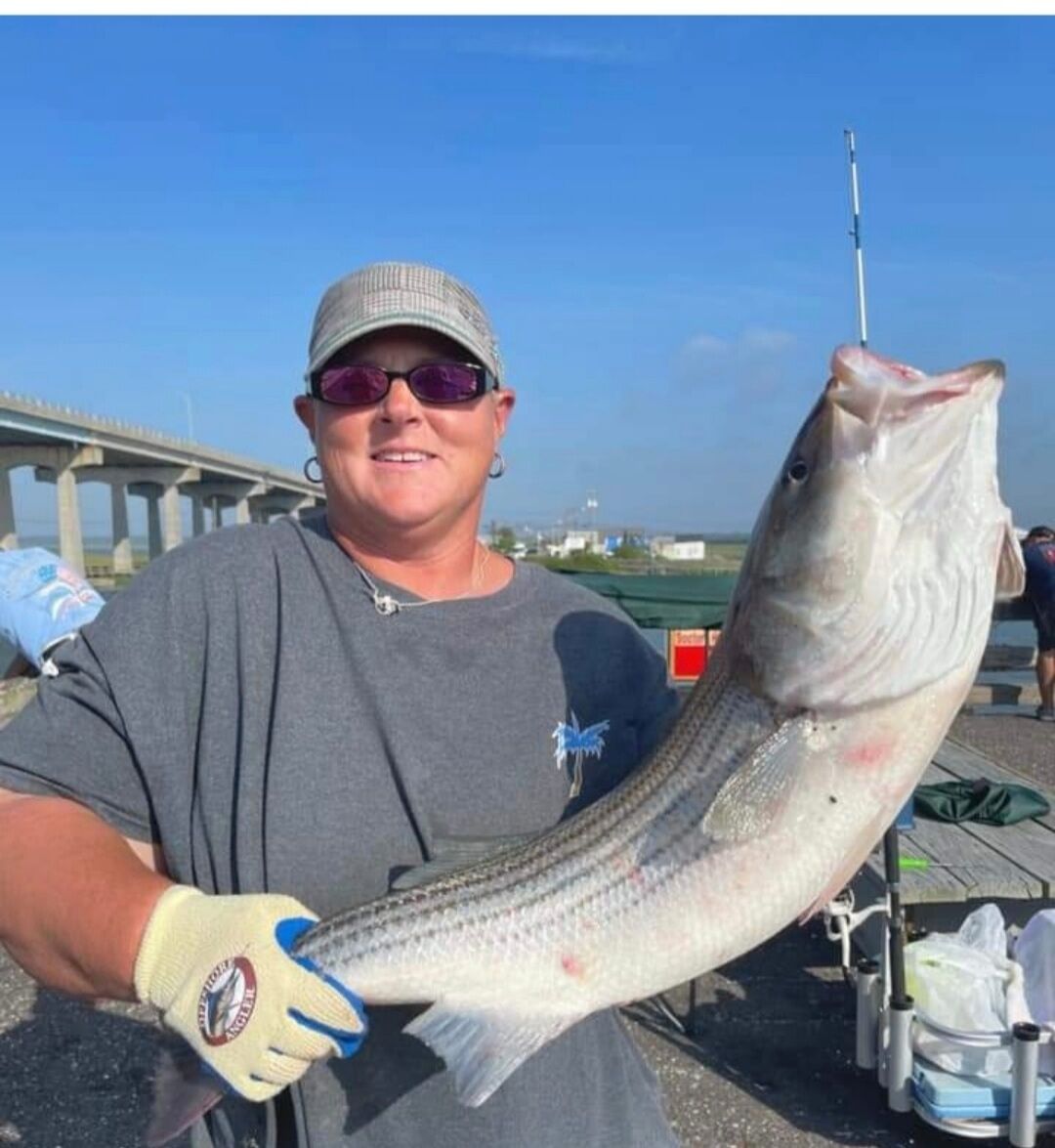 Jennifer and her 31-inch striper. 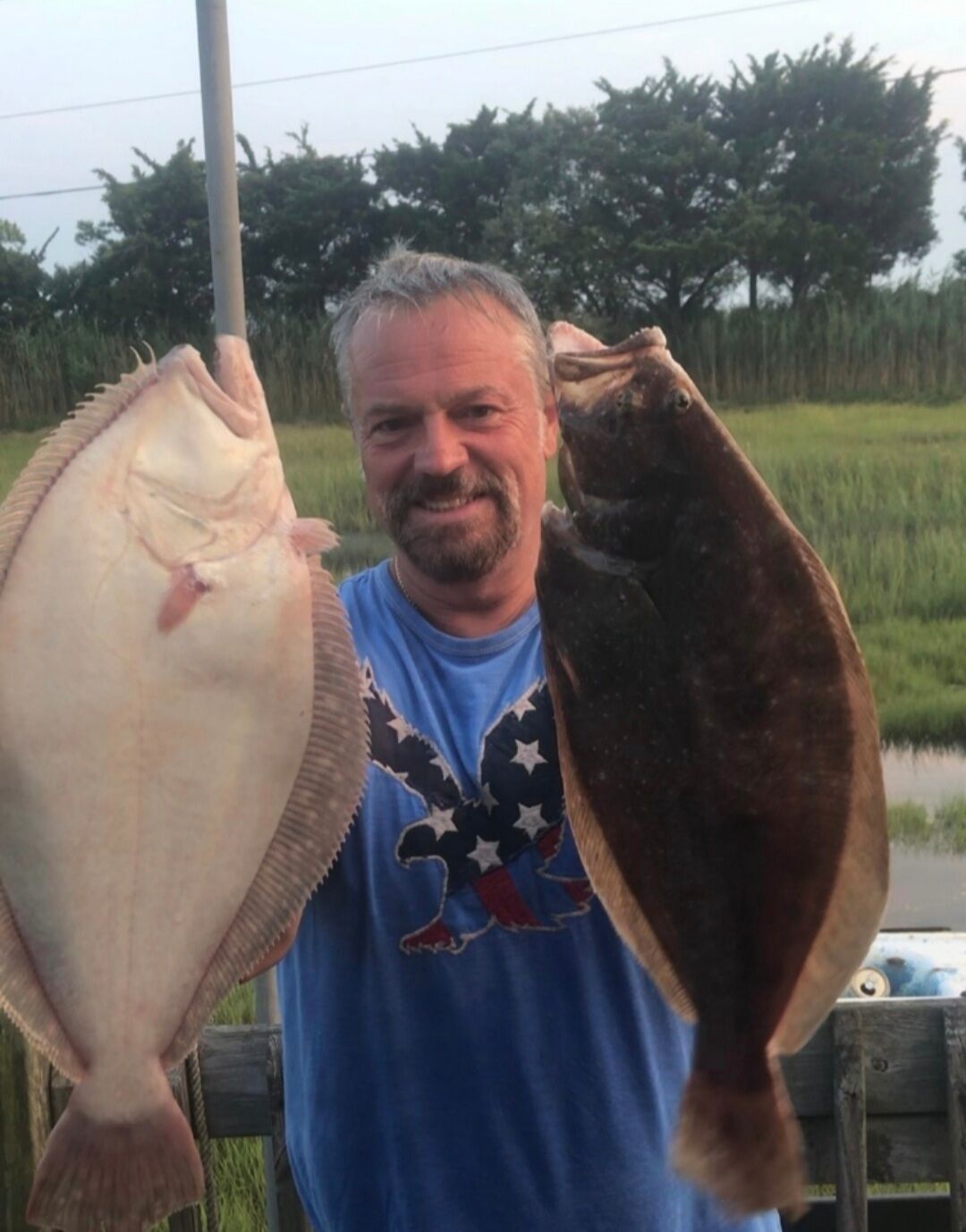 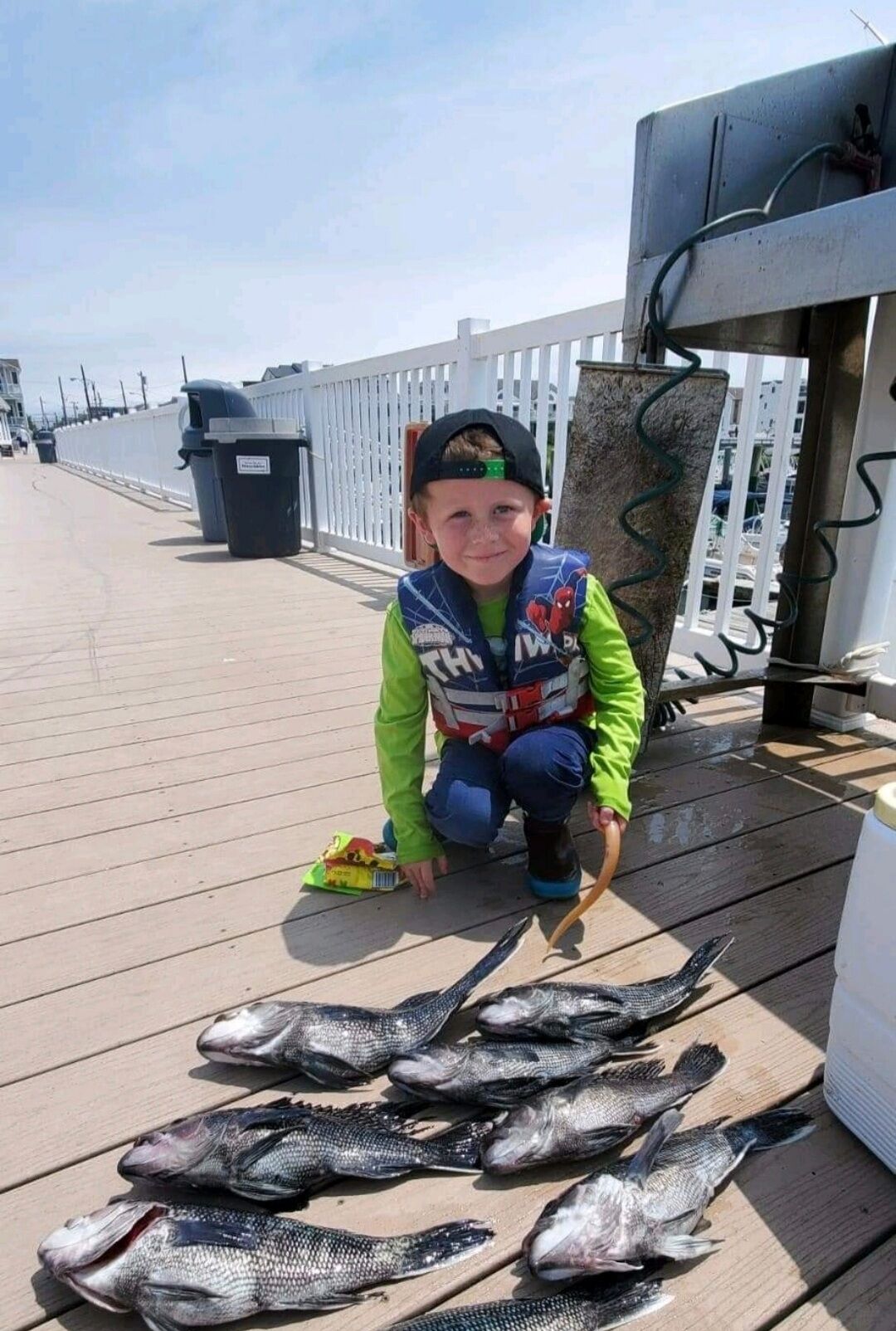 There was some damage, but thankfully, it didn’t devastate the area (Hopefully, all is well with you).

Let’s hope fishing and the hot times at the local reefs and canyons will continue as it was before Elsa.

The patrons of the Sea Star III, with Capt. Chuck checking in, had a week full of fluke and sea bass. The action was predicated on each day's drift. Keepers and shorts of both species abounded. Daily pool winners, all with fluke, were Kirsten Johansen (3.6 pounds), Bob Rubeo (3.05), John Donley (2.8), James Trajano (2.25), Frank Servocky (4.05) and Jason Thomas (4.0).

The Miss Chris continues to fish off Cape May Point. It continues to be promising for them since kingfish, croakers, flounder and weakfish are contributing to the mixed bag.

Cape May Bait and Tackle reported plenty of kingfish, croakers and weakfish around Cape May's jetties and in the Delaware Bay. Flounder are being caught at the local reefs and around the Cape May Inlet. Minnows, squid and Gulp are the baits of choice.

Trolling at the Wilmington and Baltimore canyons has been the way to obtain a strong yellowfin bite. Moving inshore from there will allow for “good shark fishing."

The back bays are giving up nice-sized blue claw crabs. Grab your traps and bait, and catch a tasty meal.

The Sailor's Delight is busy putting patrons on the back bay flounder, which are also interspersed with kingfish, weakfish and sea bass.

The Cape May Lady sails daily and has been catching nice triggerfish, sea bass and fluke. They leave the dock at 8 a.m., 1 p.m. and 7 p.m.

Cathy, from Sterling Harbor Bait and Tackle, reports flounder fishing remains productive at the reefs, weather permitting, while nice flounder are still being caught in the back. While there, 11-year-old Gina Johnson caught a 3-pound, 5-ounce flounder on a minnow, and Rick Mariano landed a 25-inch, 6.3-pounder on a bucktail tipped with Gulp. Rick was fishing behind the Wildwoods.

The canyons are still providing a strong yellowfin bite. Anglers just need to pick a spot and keep an eye on the weather.

Weakfish can be caught around the local jetties, and the surf along the North Wildwood beaches is rendering nice kingfish. For those looking for something different, crabbing was reported to be excellent over the past week.

Grassy Sound Marina reported a flounder limit for Jack Lockhart, who works at the marina and enjoys fishing from his kayak after work and on his days off.

The pier provided two keeper flounder for the mother-daughter duo of Tracy and Ciara Finney. Ciara’s keeper edged her mom’s by one-half inch. The pier was also the place to be for another angler, Jennifer, as her bunker was the perfect bait for a 31-inch striper.

No Bones Bait and Tackle reported that one of their guys landed a “nice catch” in a striped bass. They mentioned that if it was an inch longer, it would have needed to be released. A little math means it was slightly over 37 inches, which qualifies as a nice catch.

The Miss Avalon has been hitting the reefs for flounder, triggerfish and sea bass. Nice fish of each species have been caught. Highlights went to Ryan Feilke and Luke Zeigenfuss, who each had nice triggerfish amongst their catches. Craig joined in with a “fine flattie,” and Matt Ballinger contributed with a good-sized sea bass.

Capt. Al, from Bayhound Charters Light Tackle Sportfishing, had the Sean Reilly party out after the storm. They caught their limit of nice-sized sea bass. Sean landed a big bonito that weighed just under 10-pounds on the scale at Sea Isle Bait and Tackle.

With Sea Isle Bait and Tackle in mind, they reported “great” flounder fishing over the weekend after the storm left the area. The bite at the local reefs seemed to return to its pre-storm state. Chris, Brian and Tony caught nice flounder during their outing while doing their best to show the reefs are back to producing quality fish.

First Fish Adventures had a nice family outing for Tom Grace, who cashed in on his Father’s Day fishing trip gift. Tom caught a “nice tog” that had to be released, but Colin landed “an extra-large triggerfish” that made a nice addition to the dinner table.

Other good trips were experienced by the Black family, as they landed several sea bass while also having some fun fighting an albacore, and by the Jeff Bryan family, as they hooked into many bluefish that kept them busy.

Boulevard Bait and Tackle reported nice flounder catches from the back bays, inlet and reef. Some examples, starting in the back, were caught by Dave (26 inches, 6.14 pounds), Kenny (23 inches, 5 pounds caught at the inlet on minnows), and a big fluke caught by an unnamed angler while fishing at a local reef. Interestingly, Kenny’s catch was his 11th keeper of the week, and all were caught while fishing from land.

Avalon Hodge Podge reported a great catch for Scott, who hooked a 3.3-pound flounder while fishing in the back bay using Z-Man matadors as bait. Also, Tom stopped by to weigh in his catch, a 23-inch, 4.6-pound flounder.

I thank Tom Ricci for sending word of two nice flounder he caught while fishing from his new kayak - keep submitting and reading. Thankfully, it would appear Elsa had no long-lasting impact on fishing. The area is recovering quickly, so get out and catch your share.