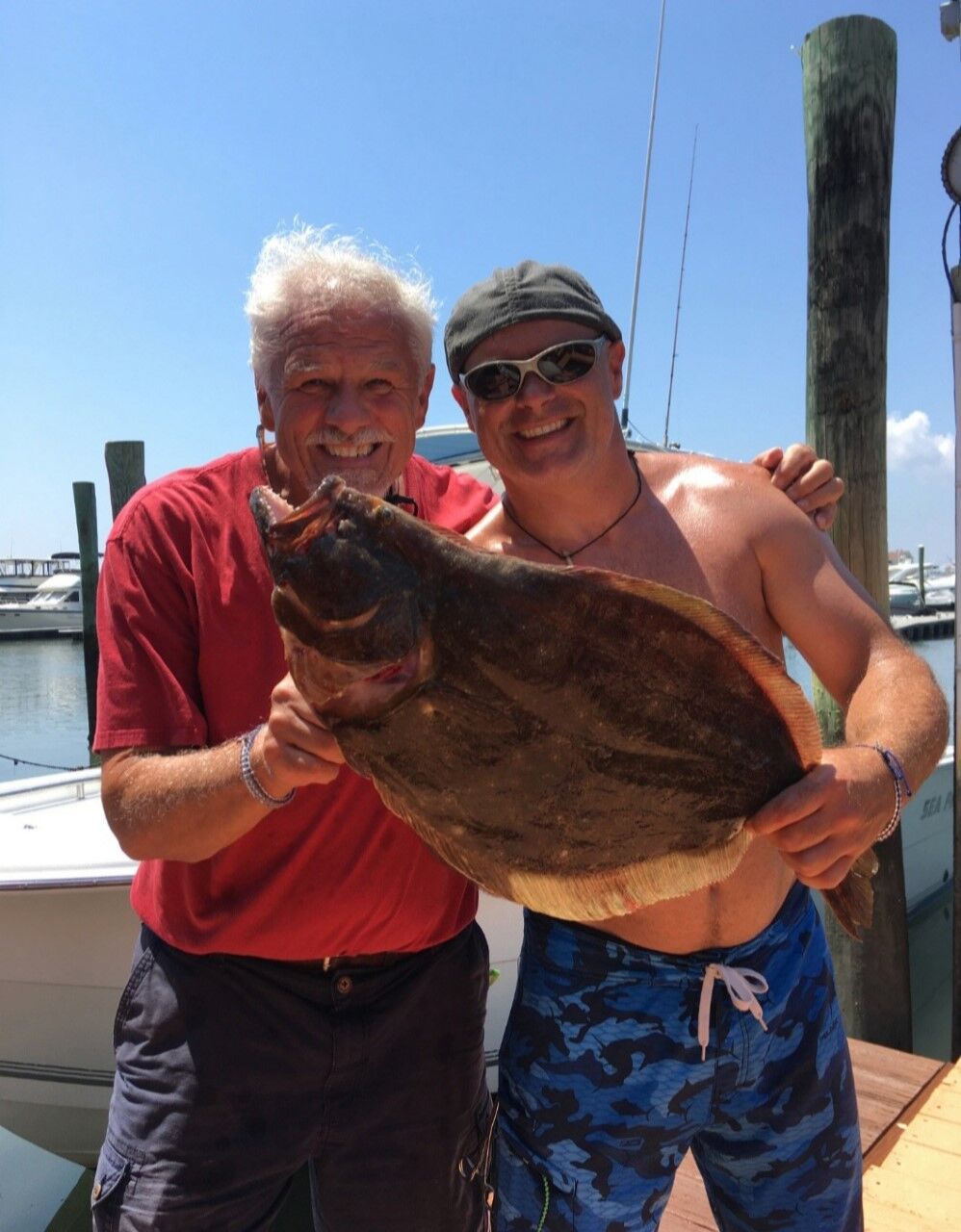 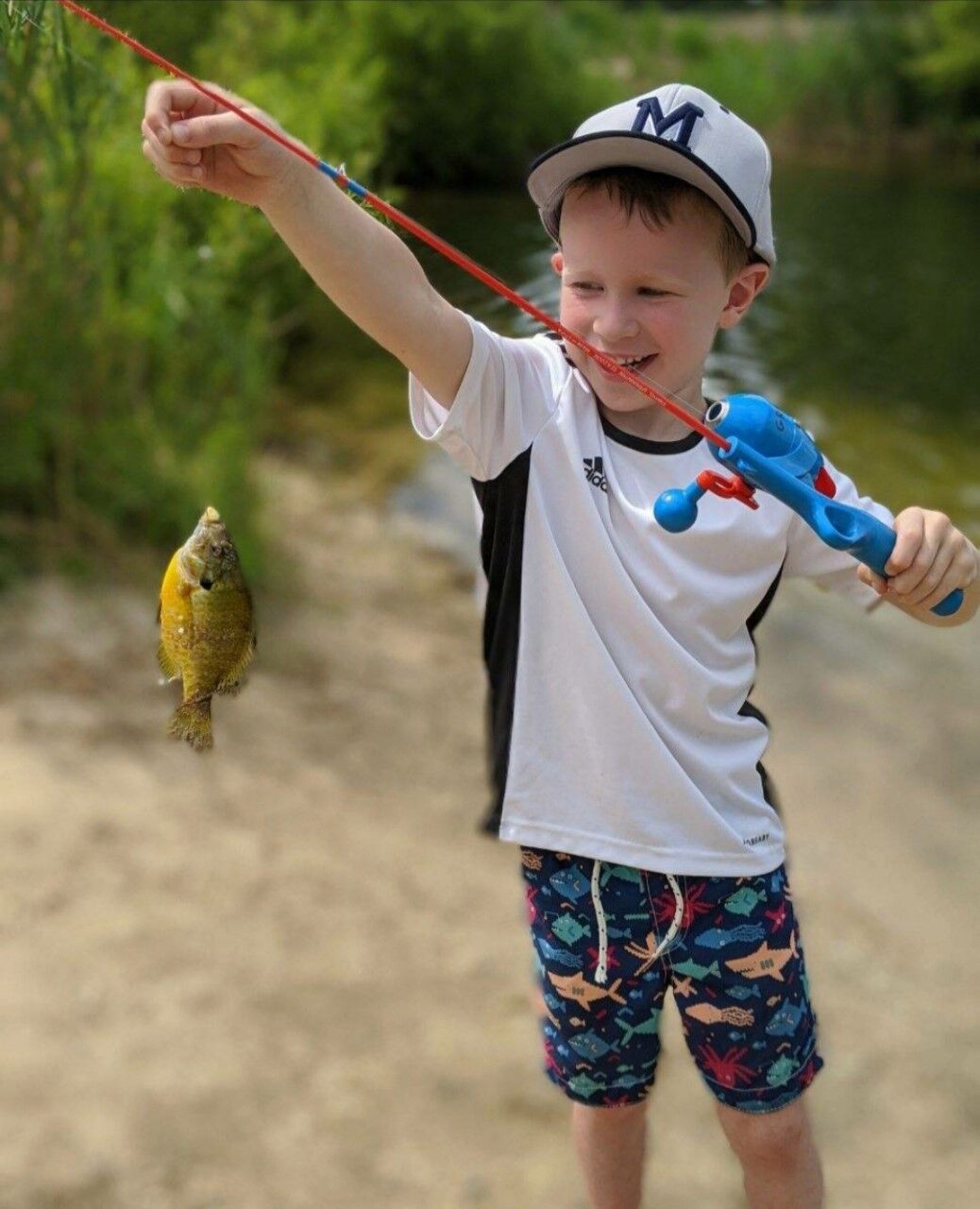 Greg Fitzpatrick, 5, and his first fish. 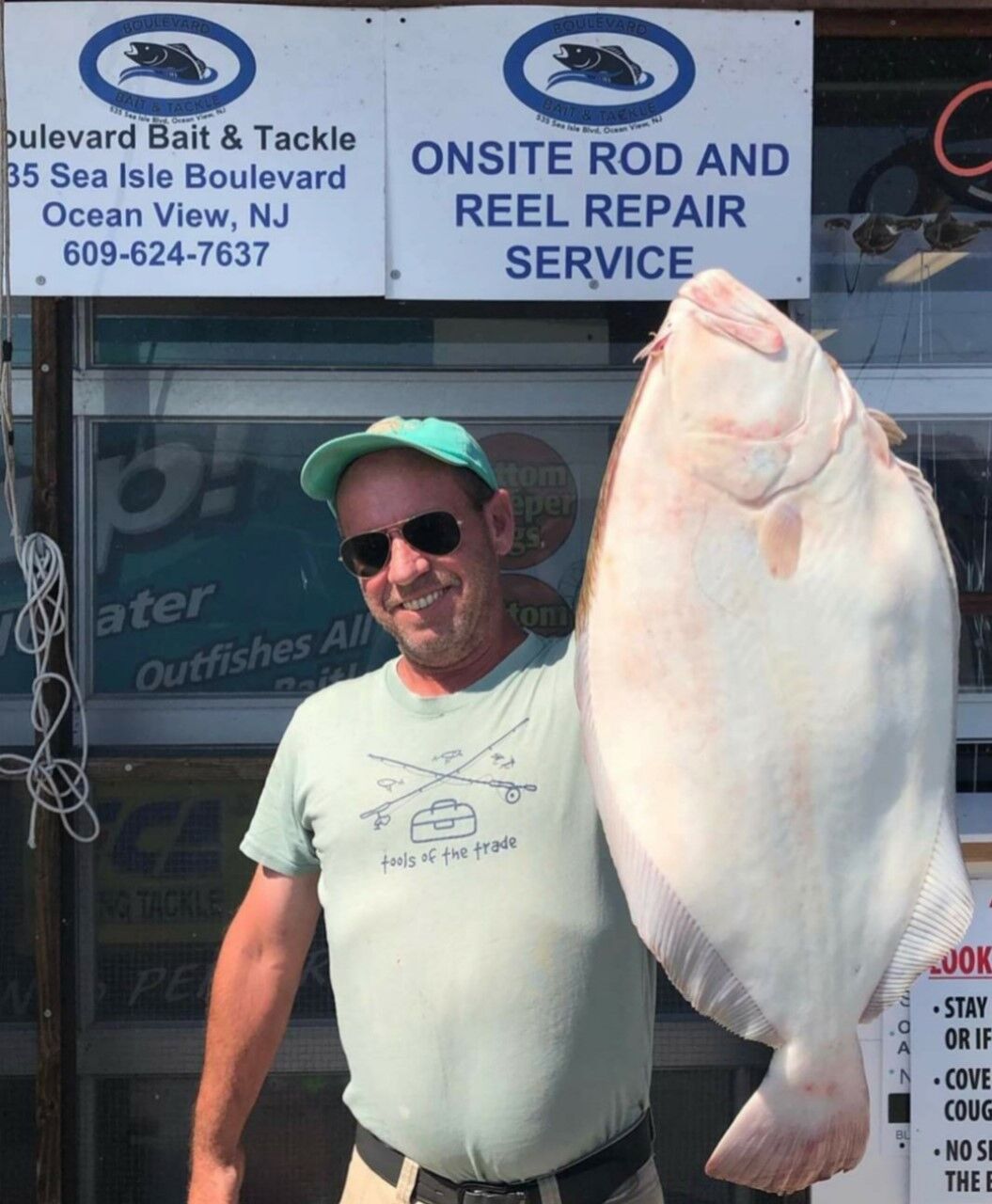 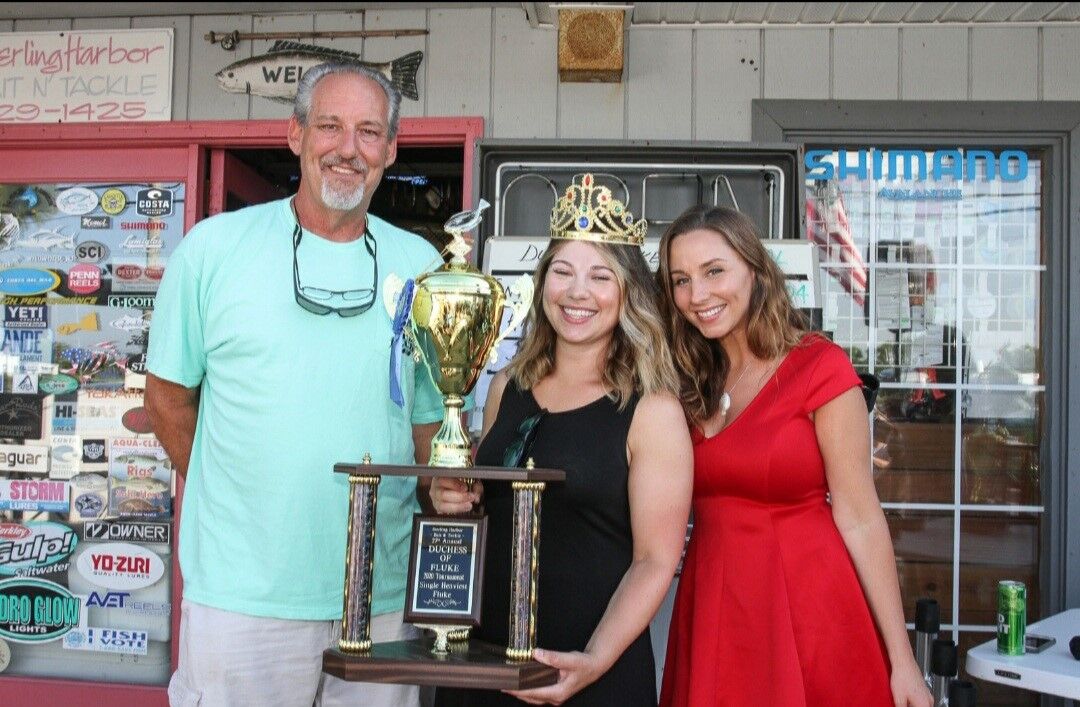 More heat but more fish. It’s a tradeoff I believe most of us would accept.

The recent afternoon southwest wind made for some choppy conditions but the fish were biting, and isn’t that what matters?

We have a new addition to the local fishing community, results from a local long-running flounder tournament, several readers' submissions, and word of some nice fluke being caught. Let’s get right to it.

First, congratulations go out to Ryan and Tessa Graessle. Ryan, the Cape May Lady's first mate, and his wife, recently became the proud parents of Paisley Ann Graessle, who was born July 16, at 7:01 a.m. She was 19 inches long and weighed 7.02 pounds. If you see Ryan and Tessa in your travels, remember to congratulate them.

The 27th Annual Duke of Fluke Tournament was held recently. Eighty-six boats and 30 kayaks participated. Let’s check out the results.

The top three places in the boat division (single heaviest flounder) went to the Regal Buoy, with Capt. Paul Regalbuto Jr., with a 7.24-pounder, El Nino, with Capt. Nino Aversa, with a 6.51-pounder, and Can’t Get Right, and Capt. Brian Nichols, with a 6.24-pound fish.

The Duchess Award went to Meagan Trainor, who was fishing on the Miss Addison II and landed a 4.25-pounder.

Finally, the Junior Angler Award went to Charlie Engelien, who caught a 4.28-pounder. He was fishing on the 3 Pete.

The Sailor’s Delight had more nice catches of flounder from the back bay. Some nice keepers were mixed in with the shorts. They also started to pick up some “bull," or nice-sized, kingfish. Everyone is happy to see them showing up.

The Cape May Lady is busy running their various trips. Flounder, tilefish and offshore trips, and tuna outings are filling their schedule. Check out what they are doing so you can get in on the action.

Grassy Sound Marina reported plenty of action from the pier. Plenty of anglers were out, some early, others later in the day, as they worked to beat the heat and catch the tide of their choice. Slip holders who went out also had some nice catches to report.

The Miss Avalon had some good trips during the past week. Plenty of keeper flounder found the fish box, with a couple topping the 5-pound plateau. Triggerfish and sea bass contributed to a tasty mixed bag at each day's end. They are sailing two trips daily, at 8 a.m. and 1 p.m.

The Avalon Lady is still pulling some nice keeper flounder, as well as some weakfish, from the back bays. It’s nice to see that there are still some quality fish hanging in the back. Capt. Brandon also reports that the crabbing trips are starting to see some nice catches.

First Fish Adventures had some good action to report. They were catching some nice flounder, as Miss Donna won a family pool during a recent trip. Other trips produced both keeper and short flounder which contributed to the action.

One shark outing was fogged out, so the group stayed closer to port. That led to a day of catching some nice eating-sized bluefish, and the action the blues provided was also welcome.

The Star Fish is running their two daily trip schedule and are catching sea bass, flounder and triggerfish. They leave at 8 a.m. and 1 p.m.

Boulevard Bait and Tackle had an active week. Lots of fish, particularly fluke, crossed their scale. Some highlights included a limit for John and Dean Mel, who caught their limit, which included a 6.8-pounder, a back bay limit for Dan Erdie, and a 26-inch keeper for Steve W. Another nice catch was the cobia caught by Danny Konczyk, with an assist to Capt. Joey O. and Kyle, who helped him gaff and land the fish.

The main highlight though goes to an angler named Jim. He stopped in with a 29-inch, 9.8-pound fluke after fishing in the back bay. Congratulations, Jim, on a true doormat.

Sea Isle Bait and Tackle reports that there are still some nice fish to be caught in the back bays. As proof, they mentioned an angler named Bubba stopped in with a nice combo of a keeper weakfish and a flounder. Find that quiet area in the back, drop your bait, and see what you can catch.

The Sea Star III had another productive week while they fished the local reef system. They caught some sea bass, but the real stars were the fluke. They had several upper 4-pound to mid-5-pound fish. They also had many limits with one angler, Frank Servocky, not only recording three limits, but winning two pools. His winners weighed 3 and 5.45 pounds.

Capt. Mike, from the Miss Chris, reports solid fishing during the twice-daily, four-hour trips. Loads of kingfish and weakfish are being caught daily. On a recent trip, Rich and Nan Hogan caught a bucket of kingfish, plus a couple of keeper trout. One of them was big enough for Nan to win the pool. Nice job, Nan.

The Porgy IV had another busy week, as they caught some nice flounder. Greg Chalmers, Al Pavlichko, Jaime Burd, Mike Chen and Craig Constantino won pools during the week. The top fish was Mike Chen’s 6-pounder. Three of the pool-winners, plus some other anglers limited out during the hot week of weather and action.

Cape Queen Sportfishing Charters took the McCormick girls out for their first fishing trip and proved to be quick learners. They trolled for a few hours, during which they totaled 25 bluefish and one Spanish mackerel. Good effort ladies.

The Fishin’ Fever, docked at Utsch’s Marina, has had excellent trips with great results while running flounder and tuna charters. They also had a great day recently on their day-time swordfish trips.

Full Ahead Sport Fishing, also at Utsch’s, is catching plenty of flounder for their charters. They also have started catching some Spanish mackerel. Capt. Bob mentioned that it is a “great” fishery for you anglers to “enjoy." It provides plenty of action for young anglers, plus experienced anglers can also enjoy it.

Stalker Fishing Charters and Capt. Skip had a productive week. A lot of tuna and some mahi-mahi are making for nice trips. The tuna bite has been hot as of late, with many fish in the 40-to 60-pound class being caught.

Cape May Bait and Tackle reports that Capt. John, from Caveman Sportfishing, reported a solid trip recently. The charter boated nine yellowfin tuna during their offshore trip as they experienced the “hot” bite in that area.

Off The Hook Bait and Tackle reported plenty of action for flounder around the reefs and tuna in the 30-to 40-fathom areas. They weighed some of those tuna for Capt. Dave Federico and the crew of the Jersea Green. Joe Roesly led the way, with a 47-pounder.

Special thanks to Andy Grubb for submitting a picture and report of him and his father, Dave, and Dave’s 25-inch flounder. They were fishing the Cape May Reef, and the flounder hit a strip bait in 60 feet of water.

Also, thank you to Marie Fitzpatrick for submitting a report and pictures of the Fitzpatrick brothers, ages 3 and 5, and their first-ever catches. They were fishing at the Cox Creek Reserve and caught some sunfish.

We had another busy week, which is always great. Get out, enjoy it, and I’ll see you around.