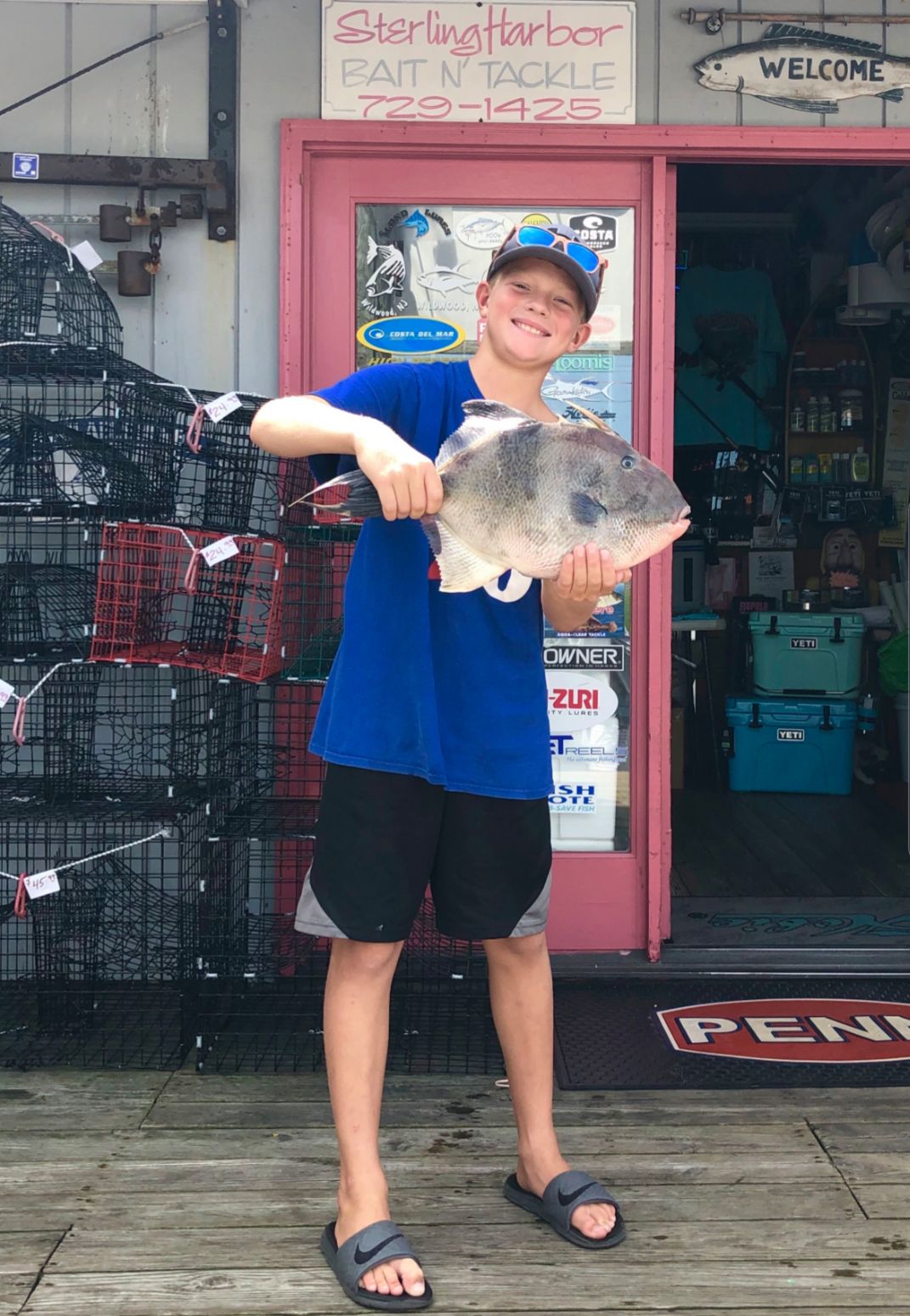 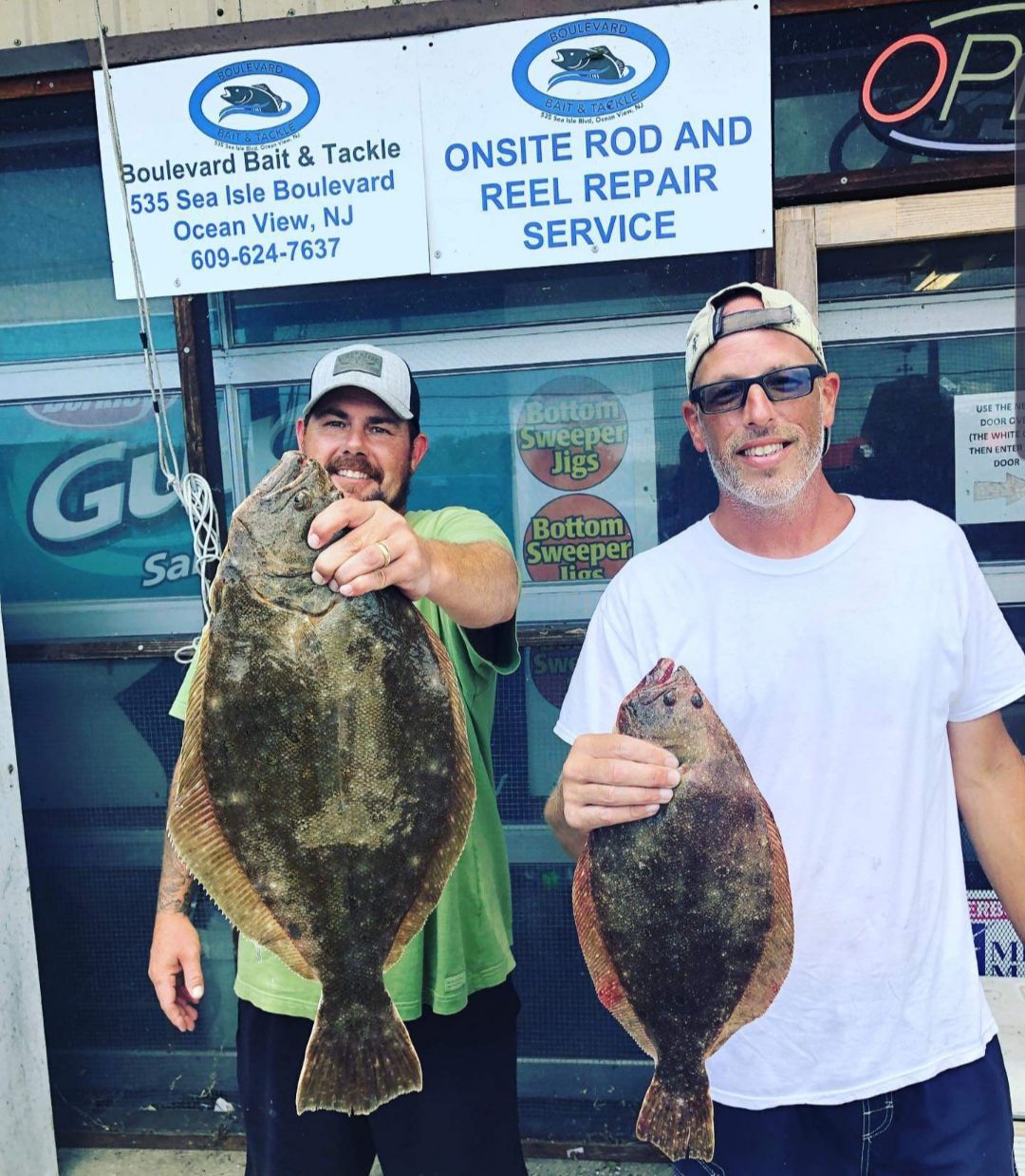 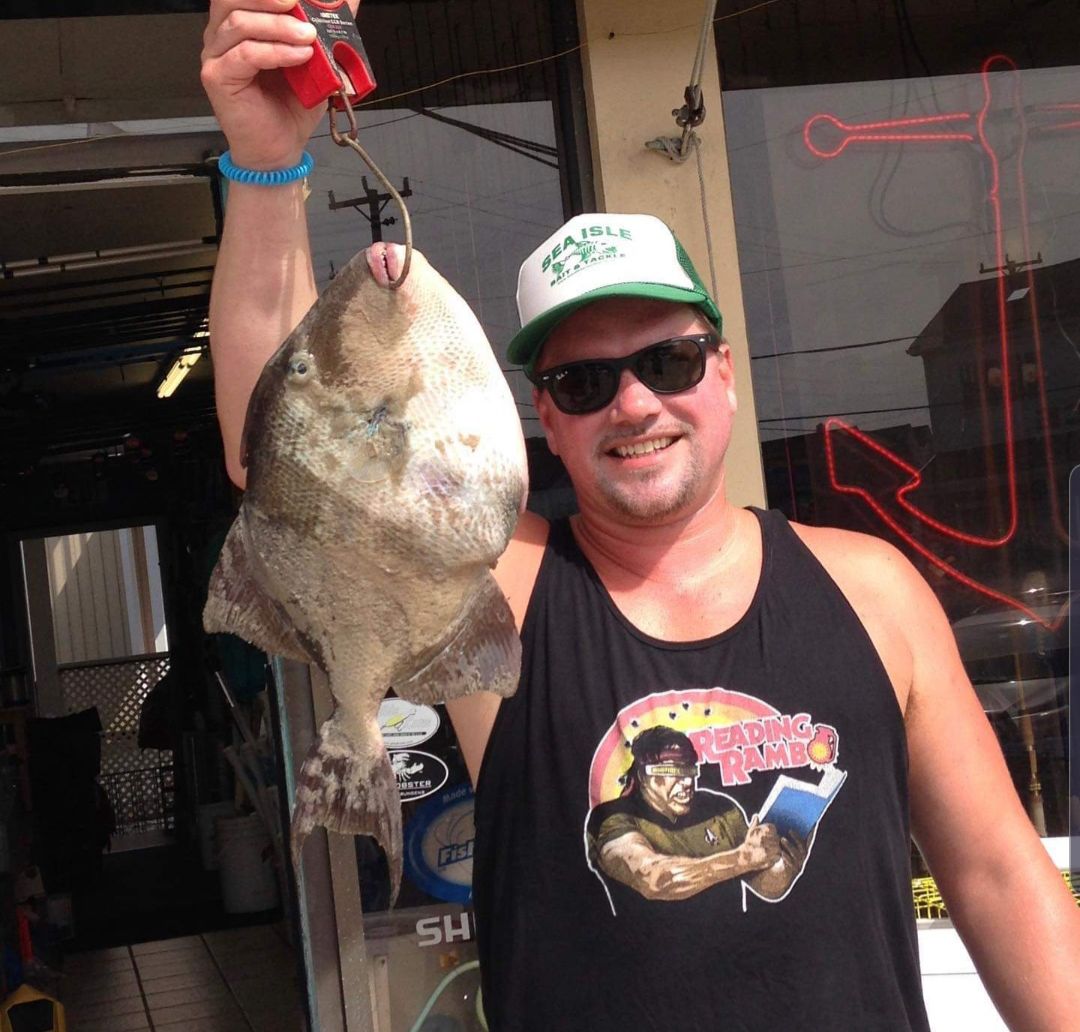 Chris and his 4.6-pound Triggerfish. 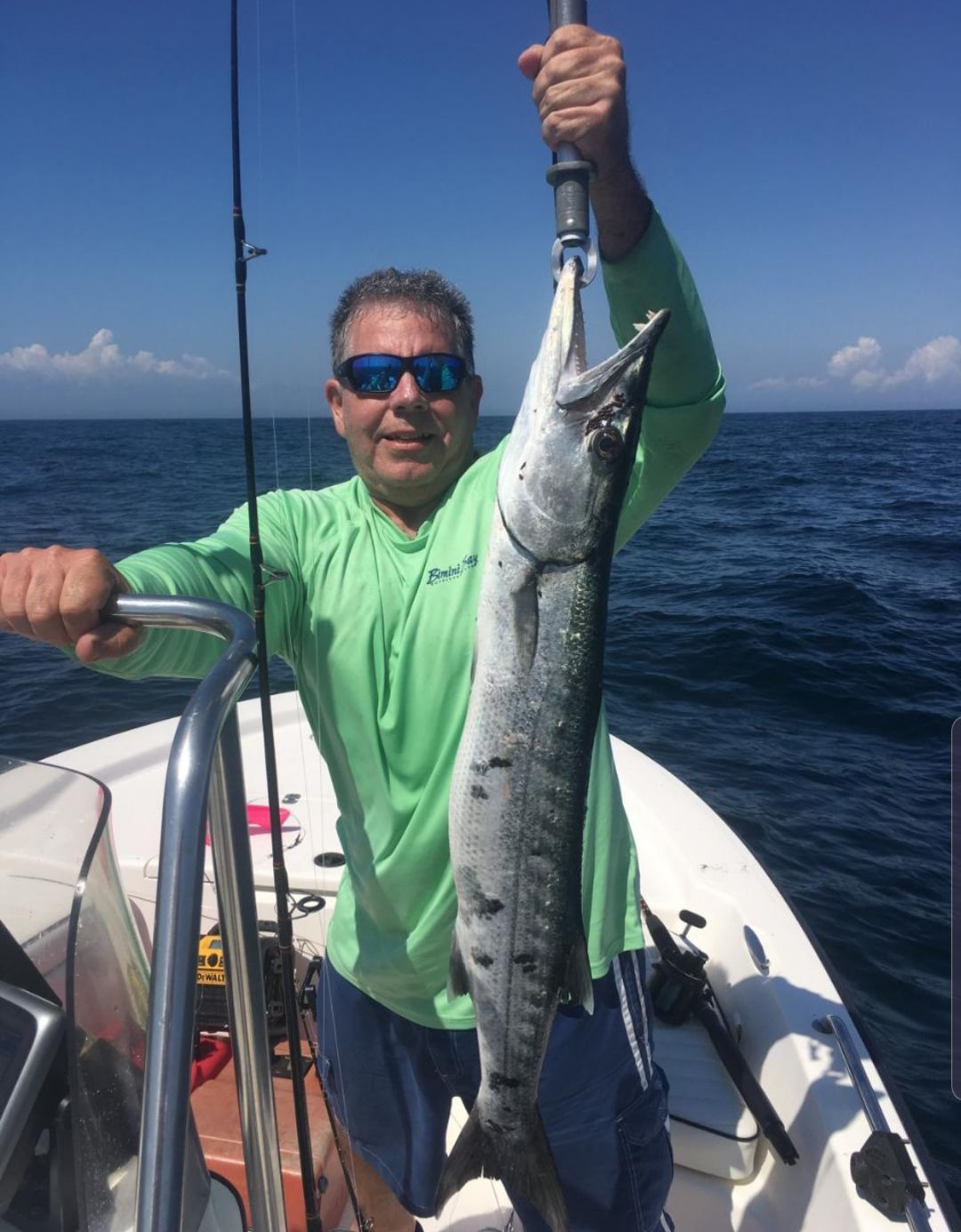 Dan Brady and his Barracuda. 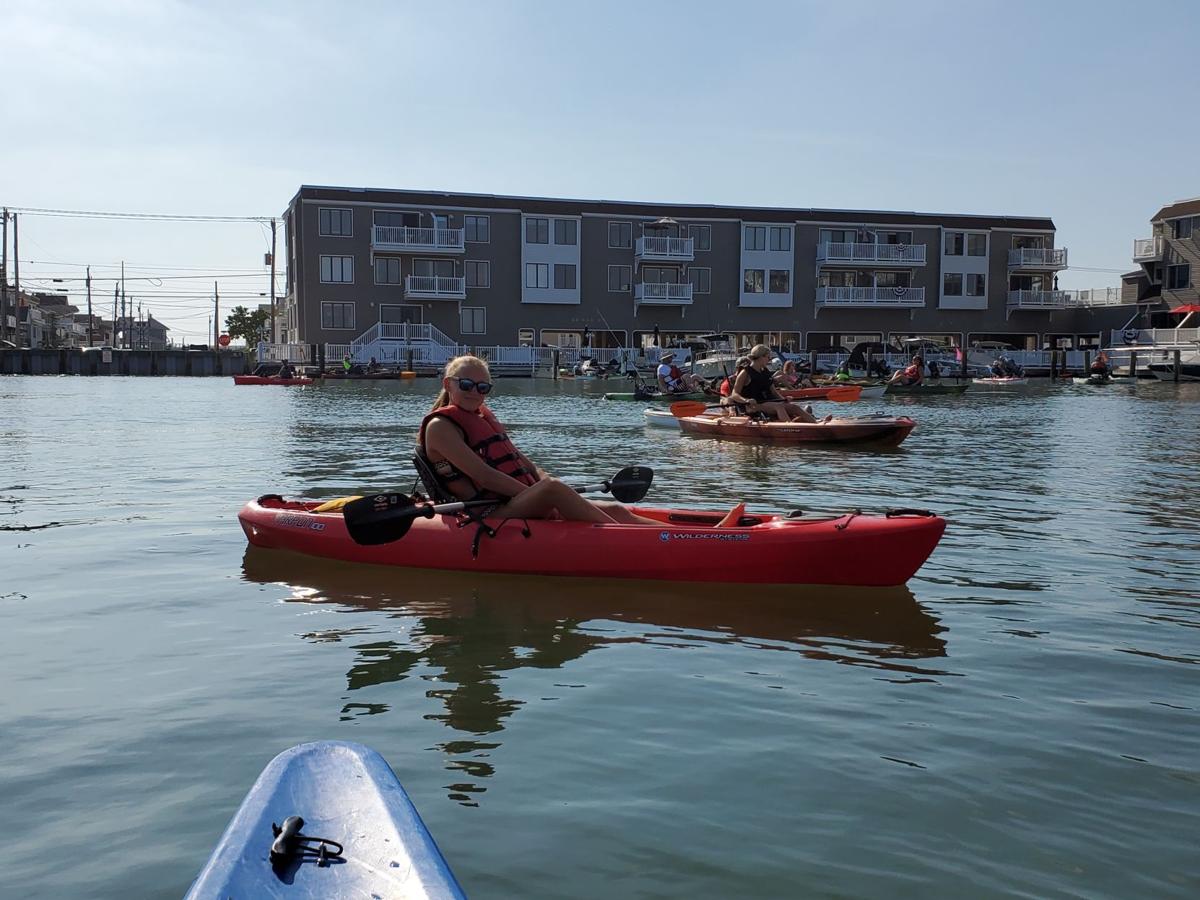 Kayakers finishing up a break during the 1st Annual End of Season Paddle Party 2019.

Chris and his 4.6-pound Triggerfish.

Dan Brady and his Barracuda.

Kayakers finishing up a break during the 1st Annual End of Season Paddle Party 2019.

It’s hard to believe, but we have passed Labor Day. Summer is still here and is speeding along on its merry way. We also have a hurricane spinning off Florida that, by the time of this publication, may have us with its residual effects.

Hopefully, all will be well, and life and fishing will have returned to our definition of normalcy. We had some nice results recently, including a Swordfish and a Drum Fish. Let’s check out the recent developments.

Leading off is Off the Hook Bait and Tackle. They reported a “nice” catch of a 251-pound Swordfish for the crew of the "Harvester.” Congratulations go out to Rachel, Theo Mercurio, and Ted.

Captain Chuck from the "Sea Star III" reports that despite the windy weather, his patrons still caught fish. As conditions permitted, Fluke and Sea Bass came over the rails and both species won pools. The Sea Bass pool winners, with weights in pounds, went to Dave Beccaria (1.5) and Sam Sibila (3.75). Winners with fluke were Dennis DiLodovico (3.0), Frank Servocky (4.35), and Blane Womble (4.05).

Capt. Mike, on the "Miss Chris,” reported that the “windy beginning of the week” had them favoring the local beachfront while fishing. They were able to land keeper Flounder and some Weakfish. As the wind ceased toward the end of the week, they returned to their normal fishing grounds “down at the Point.”

The "Porgy IV" with Capt. Paul has had his patrons on Flounder - as you would expect. He also was catching more Sea Bass. Unfortunately, the season for Sea Bass is closed now, but will re-open Oct. 8.

Flounder season is still open, and recent pools went to Carl Davis who caught two fish weighing 6.12 and 5.43-pounds, Ken Minett, who limited out during the same trip, Everett Fleming who won with a 22-inch fish while also limiting out, and Marty Overline who won with a 22-inch fish. He joined the others by also limiting out. Minett and Fleming had limits of their own on the day that Overline won. These anglers are known as "sharpies" in the fishing business. They know what they’re doing, they catch limits, and they win pools.

Capt. Bob, from the "Full Ahead,” reported that the crew worked hard sifting through throwbacks on a recent trip. When the day ended, they had a full limit for each angler on the trip. He thanked them for “making me look good” as the day ended.

The "Fishin’ Fever,” with Capt. Tom, had a charter out right before the Sea Bass season closed. They caught some “bonus” Sea Bass which went nicely with the Fluke, and some went to 25-inches that they landed that day.

The "Miss Avalon" was out catching Fluke over the weekend. They will continue to target Fluke, Triggerfish, Weakfish, and Kingfish. Give them a call at 609-967-7455 to see what specials - such as Ladies Day - they have planned.

While on the line you can check on the schedule of the "Avalon Lady.” They like to hit the inlet and back bays, which are nice fall areas for Weakfish, Bluefish, and some early Stripers.

Capt. Al had the "Bayhound" on the fish, as they had a nice Friday before the holiday trip. They termed it “good Fluke fishing today” as the three anglers all limited out. Not a bad average.

Sunday was more sensational, as Capt. Sean Reilly and Brian Shea each landed their first Cobias. They also caught “a nice mixed bag catch” of Triggerfish, Bluefish, Fluke, and Spanish Mackerel. Some nice Sea Bass had to be returned, but they will be sought in the October season.

Bragging rights go to Brian, as his Cobia was of legal size while Capt. Sean’s went back into the brine.

Boulevard Bait and Tackle has been weighing in nice Flounder that have been coming in from the local reefs. They have been producing quality keepers recently.

Ryan came in with a 19-inch keeper and his fishing partner, Padraic Donovan, followed him through the door with a 27-inch, 6.50-pound Fluke. That fish is in second place in the yearly tournament.

Cameron was also reporting that Snapper Bluefish are “just about everywhere.” Grab some mullet and toss them out for a good chance to catch some.

They celebrated by having “a blast catching Mahi-Mahi.” They caught more than enough to have “plenty of fish tacos” during the holiday weekend.

Another trip saw the Jennings family have fun, as they “caught a mixed bag of back bay smalls.” The action kept them busy as they had a “fun day.”

The "Starfish" was out over the holiday catching Triggerfish, but their big highlight of the weekend was the catch of a Black Drum Fish caught by Sherri Parnell Spicer. It was an unexpected catch during the holiday weekend.

Cathy at Sterling Harbor Bait and Tackle reported that “when the conditions were right over the weekend,” nice Flounder were caught - that means both in the ocean and the back bays.

One highlight goes to Scott Wheeler and crew, who fished from his boat the "Big Bone.” They were out at the reef and recorded a four-man limit.

Another catch of note was made by 11-year-old Charlie Engelien, who "checked in" with a Triggerfish that hit on a crab bait and tipped the scales at 4.15-pounds.

The surf “still” has Kingfish in it, and Bluefish are being caught at the inlets and the beachfront.

Due to the strong tides the crabbing was slower, “but should improve now that we are past the new moon.”

The "Sailor’s Delight" continues to catch Fluke as they have been doing since the season began. Their patrons have also been reeling in Sea Bass (returned), Bluefish and Weakfish. Add in Sea Robins, sharks, and even some Lizardfish and the backwaters are teeming with life.

They have been doing particularly well with keeper Fluke since the calendar rolled over to September.

The Kayak Fishing Store reported the catch of the “biggest Sheepshead I’ve ever seen.” A check on a portable scale registered over 15-pounds. The scale never fully stopped, but was registering between 15 and 18 pounds.

The angler, Liz, settled on over 15 pounds and “was gracious enough” to return “this monster” to the water.

The First Annual End of the Season Paddle Party 2019 was a success, as roughly 35 people participated. Homeowners waved to the paddlers, and some joined in as the flotilla of kayaks and stand up paddles (SUP) rowed around the backwaters and lagoons of Stone Harbor. Everyone enjoyed the event, and are looking forward to more outings.

Don’t forget that Grassy Sound Marina will be hosting the Heroes on the Water South Jersey kayak fishing event Sept. 21 from 9 a.m. to 4 p.m. The event is free for active-duty military members and veterans, first responders, and their families.

Equipment and training will be provided at no charge. Also, volunteers are encouraged to register to help at the event.

Also, the annual yard sale at Utsch’s is Sept. 14. Fishing gear will be available, but you can always find great non-fishing items too.

Remember to apply for the Striped Bass Bonus Program through the New Jersey Department of Environmental Protection's (NJDEP) Division of Fish and Wildlife, as the deadline is Oct. 31. The program allows for one fish per permit between 24 to less than 28-inches, and can be used between Sept. 1 and Dec. 31.

Good luck if you get out and let me know how you did.