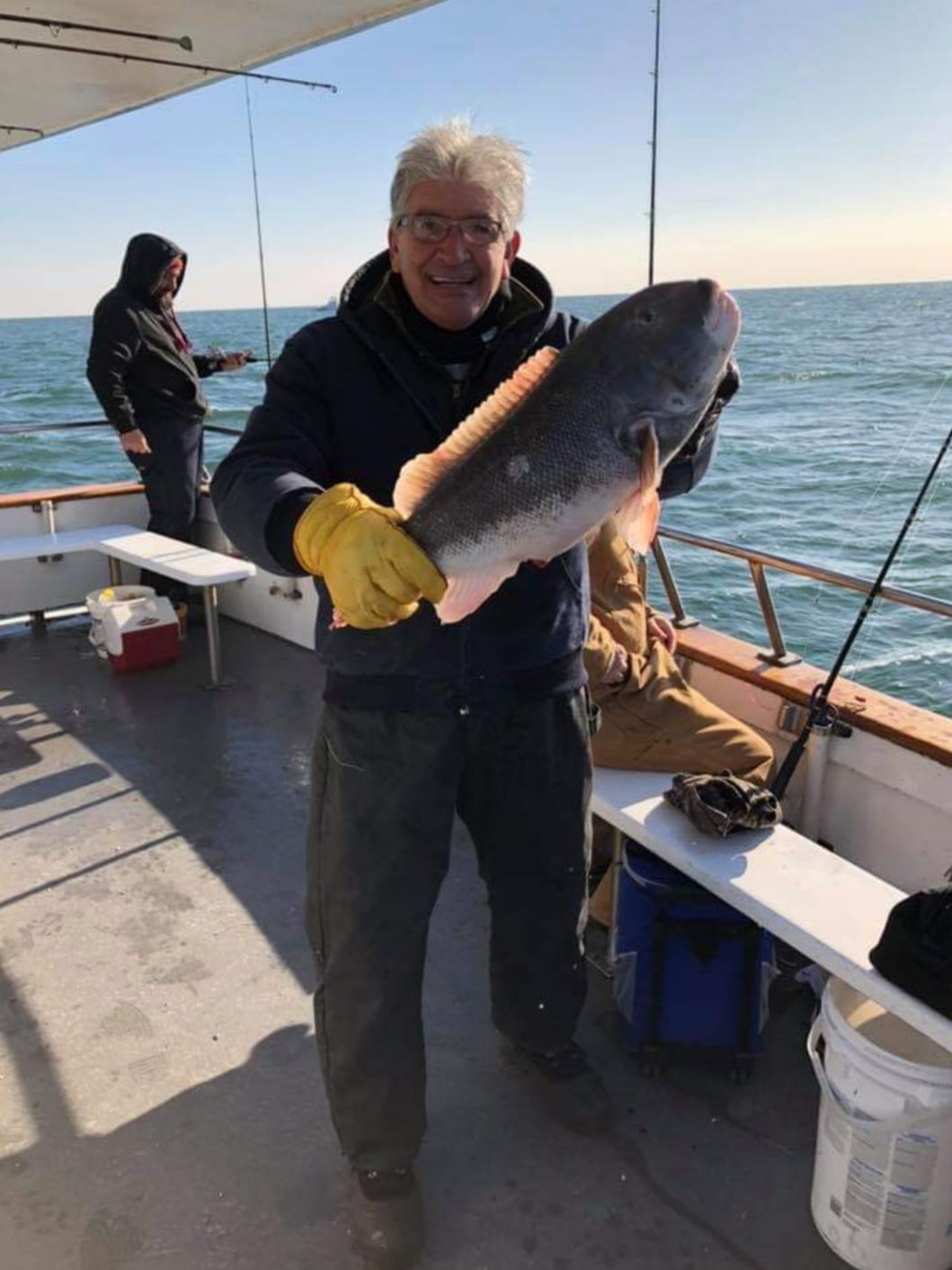 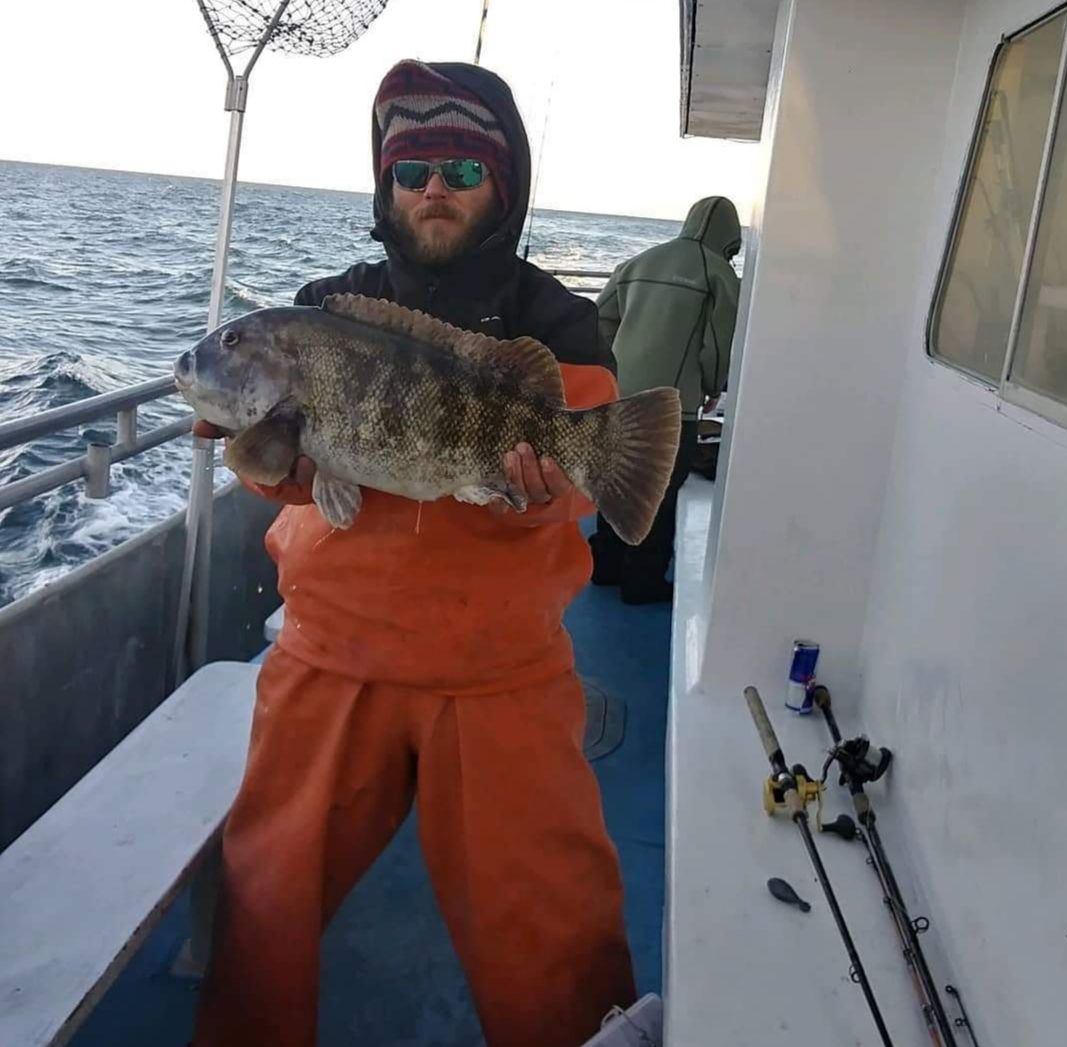 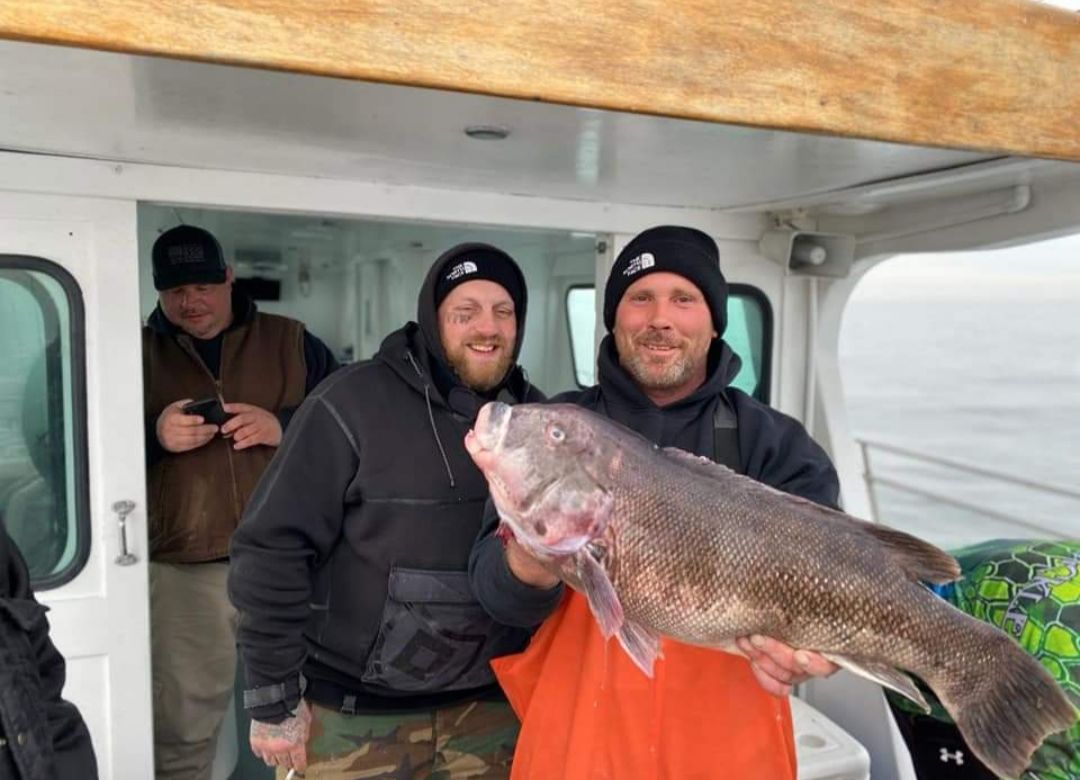 A big blackfish for a happy angler. 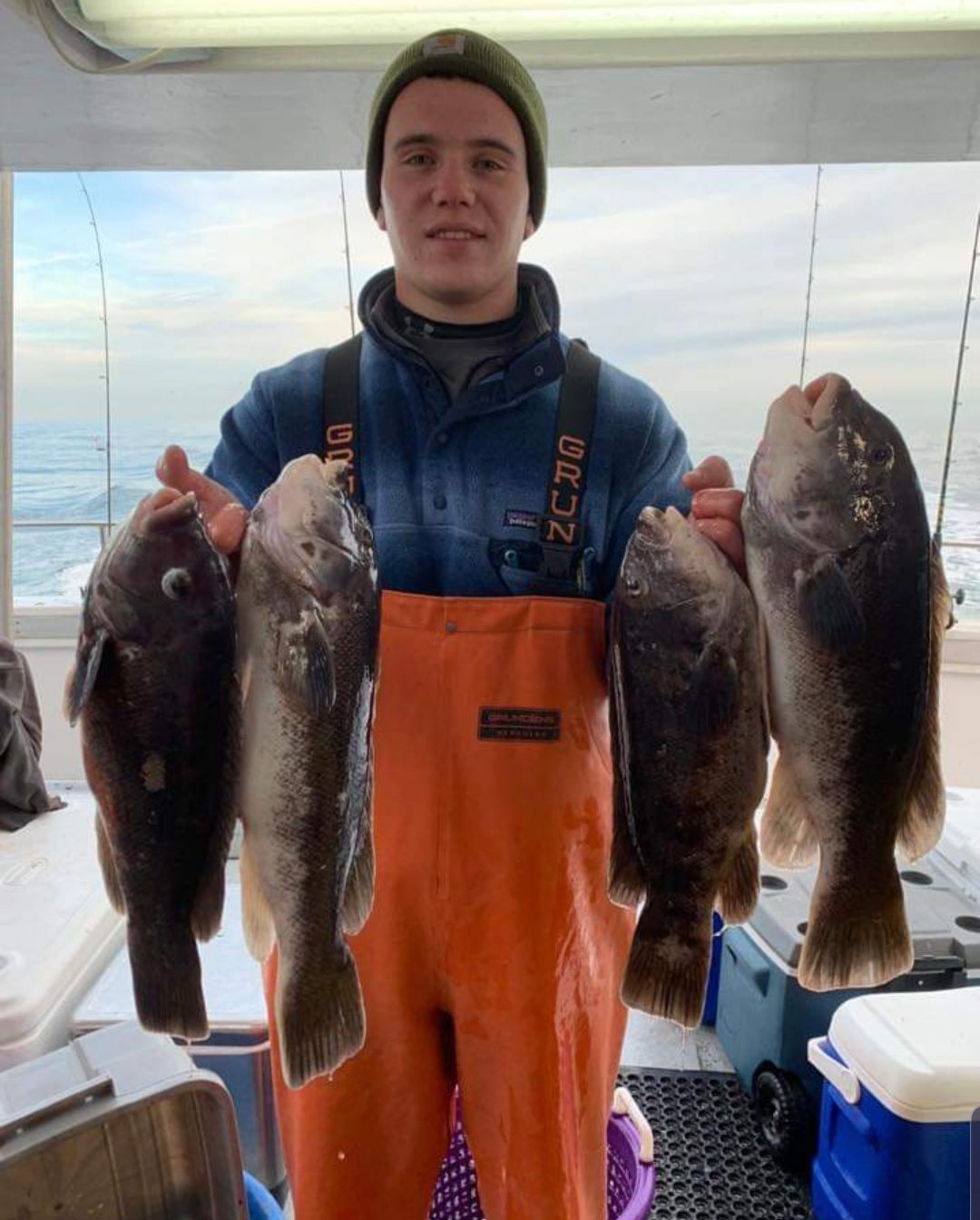 It’s four blackfish for this angler.

It’s hard to believe, but it’s a new year. Hopefully, the new year brings a new weather pattern. The last six to eight weeks have been nothing but wind and rain, with a few nice days scattered here and there.

The local boats are still running if want to get trips in. Canceled trips have been too common, and have left everyone chomping at the bit.

When the boats got out, anglers were able to catch fish. Nothing over the top, but steady catches occurred. Due to deadlines, we have a shorter reporting time, but we still have reports to pass on. Let's get going.

The Porgy IV, led by Capt. Paul, was happily back on the water chasing blackfish the Friday before Christmas. It was described as a “cold day,” but also as “good to get back out." Isn’t that the truth, after everyone was inside during the recent foul weather.

Joe DiNorscin, of Landenburg, Pa., claimed the pool Friday, with one of his three keepers. Limits went to Sam Oh and an unidentified friend. Other anglers had keepers, while a couple had a difficult day, with nothing to keep.

Regardless of the final tally, I’m sure all involved were happy to be able to drop some baits.

Saturday was slower, which resulted in a trip that had a “few” fishermen catching some keepers. Multiple anglers were shutout.

The big winner of the day was Mike Youcis, who beat the tough odds and caught four keepers, with a pool fish that weighed 9.25 pounds.

Sunday was slower, too, despite a favorable weather window. The high-hook departed with three. That’s not disappointing though, as it was three more than those who didn’t get out at all. I'm sure that angler is not feeling blue, as they have fillets for the table.

The Cape Queen was also out Saturday, but they were looking for sea bass. They found them, to the delight of a party from C&C Welding, and managed to limit out with their total. That’s always great to hear from the captain. They’ll be looking to do it again.

The Cape May Lady got out before the poor weather socked everyone early in the week, and their pool fish reached 7-8 pounds. They were planning on heading out Saturday, and scheduled a super pool trip for the Sunday before Christmas. Hopefully, the weather cooperates because I am interested in seeing the results.

Longer, deep-water trips, like this, have been known to produce big fish, plus fish you don’t catch every day, so it could be exciting.

The results from the Saturday trip were what Capt. Jason and the crew hoped for. They called it “a big fish day,” as the biggest blackfish of the day weighed slightly past 13 pounds. Other fish were near that magic 10-pound, or double-digit, plateau.

That is one goal I have each time I fish for blackfish. My biggest was 9.75-pounds, so if I can better my biggest one, there is a chance it will top the 10-pound mark, and I’ll be in the double-digit club. Hopefully, I'm not jinxing my chances as that quarter-pound to play with may be tricky. If I get there, you’ll know.

Sunday provided a nice day on the water, and a plentiful amount of short fish were caught. Keepers were caught, but the anglers had to work for them.

The Starfish was back out on the ocean Friday, too. They reported a “great day” of fishing, as many blackfish were caught. One angler, Jim Kerbaugh, who belongs to the same blackfish organization as I, was one of the anglers who shared in the bounty of the day.

He was jigging, which some anglers like to do, and was rewarded with a 24-inch, 10-pound blackfish. His friend decided to try his hand at jigging, and he proved to be a quick learner, as he landed a 24.5-inch fish, which weighed 12 pounds. Hearing about nice days this time of year, and great results on top of it, makes me want to get out as soon as possible. Nice job guys.

Sunday was slow, but not so slow that nothing was caught. Ginna Sneathen landed her share of blackfish, as she had a great day on the water. Other unidentified anglers helped contribute to the daily total of fish caught.

The Osprey put together a couple of nice days Friday and Saturday, with plenty of fish. Friday had a stronger wind than the forecast called for, with fish that were pickier than hoped for. All the stops produced fish, but none in great abundance.

Most anglers departed with fish for dinner, and some had enough for a second meal.

Saturday's bite was better, with a steady chew, but nothing to be considered great. That steadiness factor helped fill the coolers though. Many anglers caught multiple fish, which means some anglers did better than their counterparts. Everyone seemed to leave with a smile though.

The Sunday bite was as others reported, challenging. Fish were caught, as the anglers worked hard, but the results were short of the effort they put out. As I've said before, some fillets going home with you are great, and we all know it beats an empty cooler.

My first Public Service Announcement (PSA) of the new decade: Since we are now in a new year, consider this your first reminder to update your saltwater registry, as it's easy to do. Go to the NJDEP Division of Fish and Wildlife online page, find the New Jersey Saltwater Registry icon, then follow the directions.

Since it’s a new year, and decade, let's consider it a time for new challenges, such as fishing for a personal best, meaning your largest or heaviest fish of a particular species. Another goal could be going after something you’ve never fished for, or going to an area you’ve never fished before. How about buying that high-end piece of gear that you have wanted, but held back on getting?

Your challenge can be anything you want it to be, so good luck accomplishing it.

If you get that big fish, or take that dream fishing vacation, let me know. Happy New Year, good luck, and tightlines in 2020 to everyone. I’ll see you around.