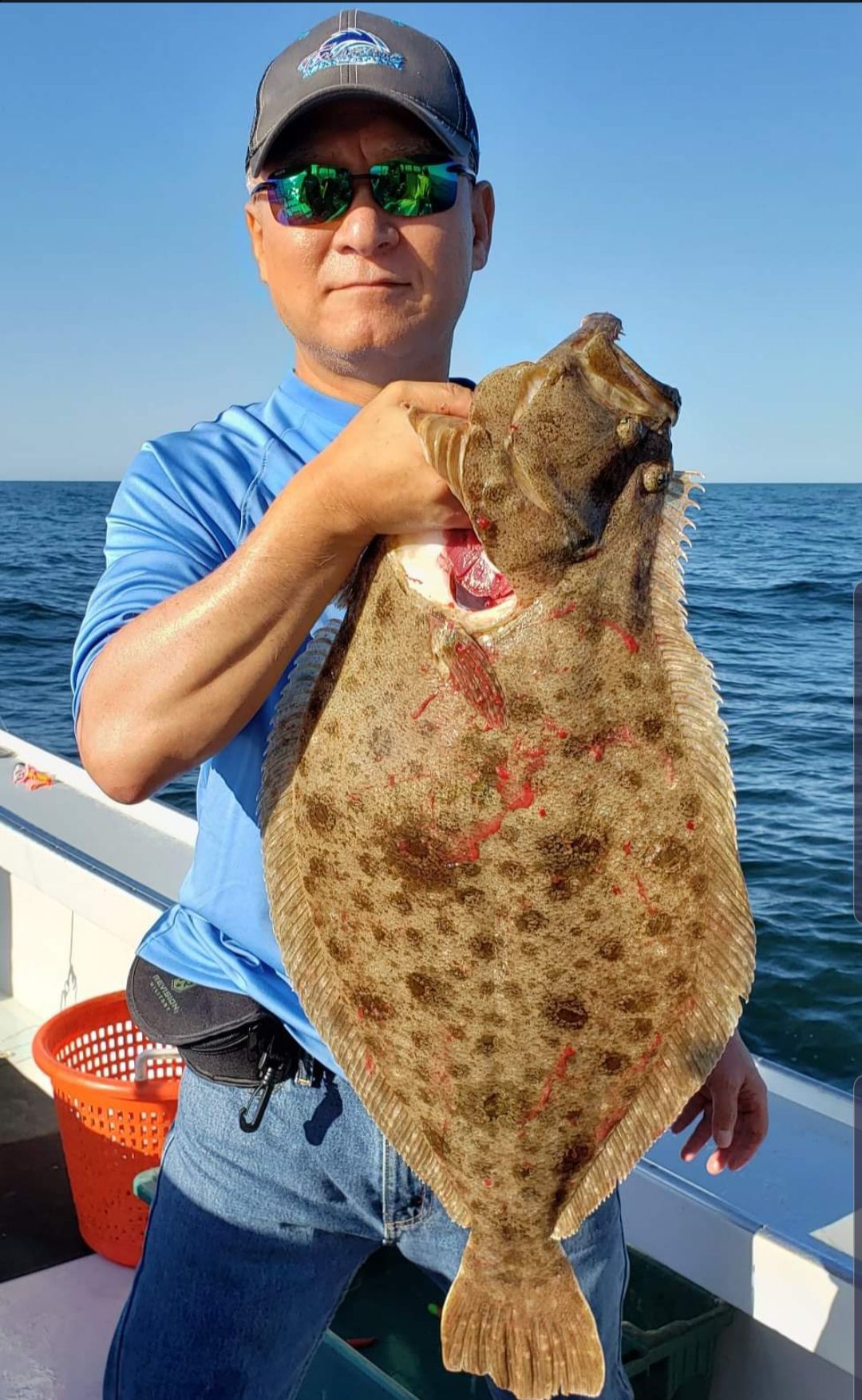 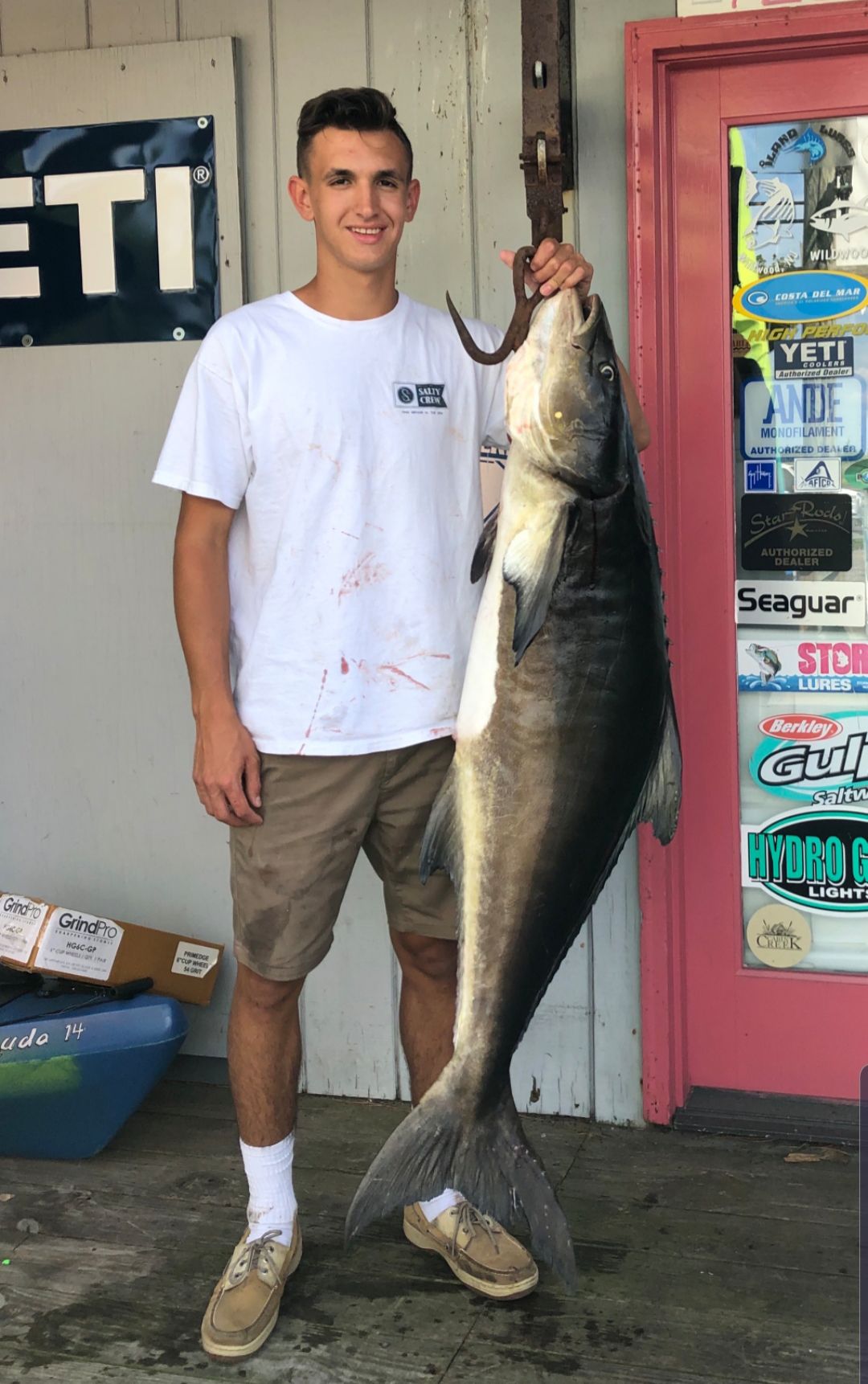 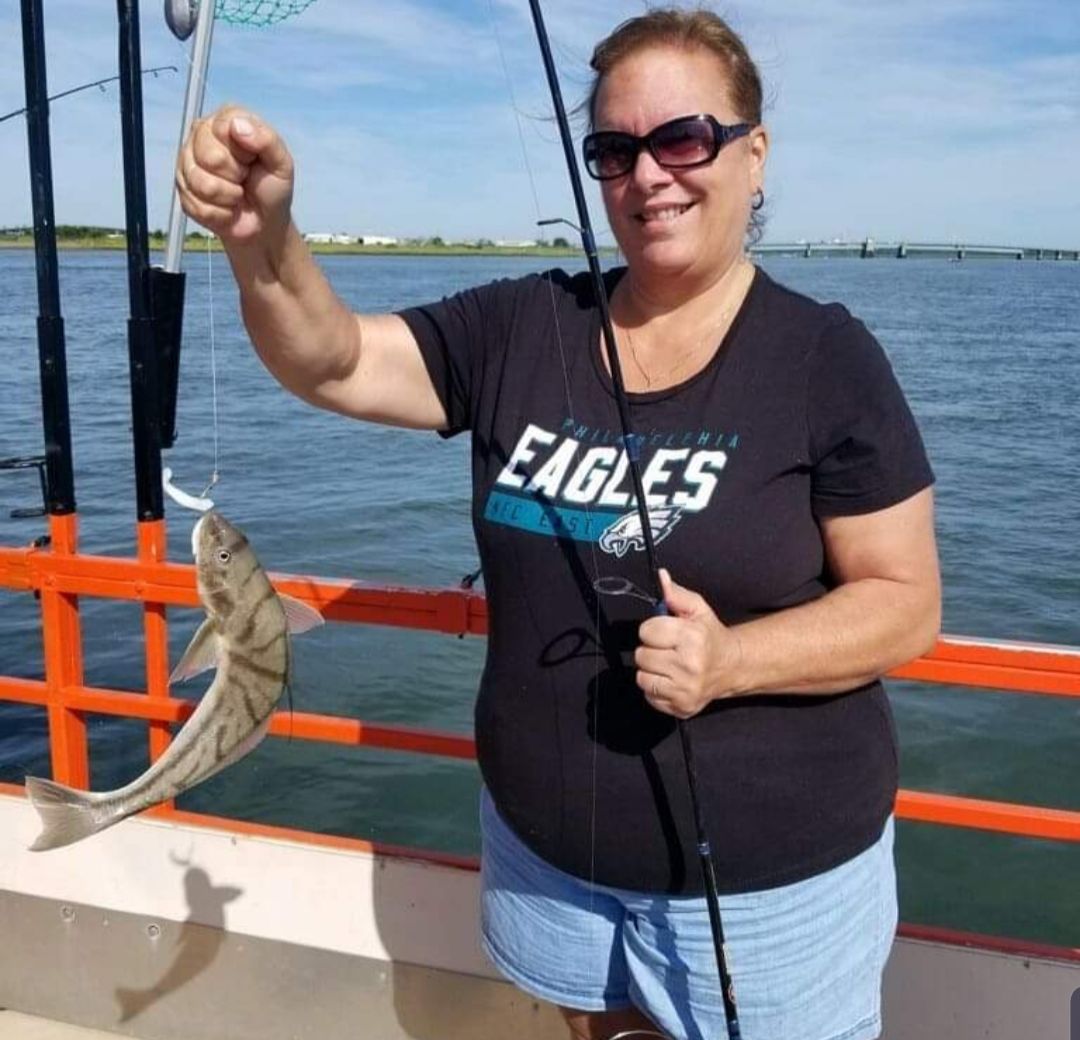 An angler and the “beefy’ kingfish. 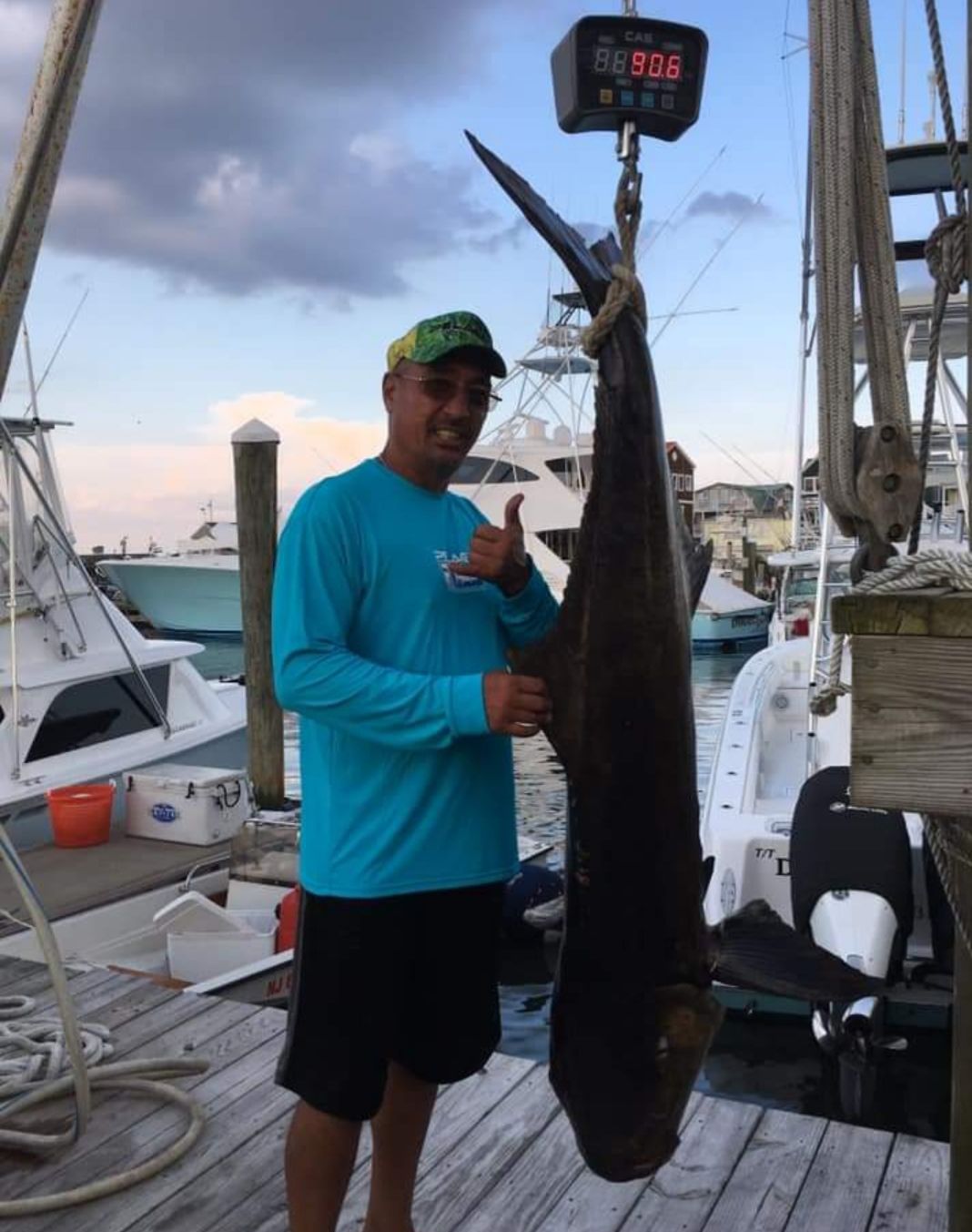 An angler and the “beefy’ kingfish.

Well, the summer is rolling on, and thankfully so is fishing. Where last week was Wahoo week, Cobia is the king right now.

Some nice big fish were taken, both by hook and by spear. Other nice fish of various species were also caught, so let’s check out what went on.

The Porgy IV continues to have fun with some nice flounders. Recent pool winners were David Hartman, who bagged a five-pounder, and John Panvini who won that day's pool with a five-pounder of his own. That Saturday trip featured 27 keepers with half of those coming early during the good drift.

Fishing during the rest of the week featured “lazy currents,” “slow” drifts and wind versus tide. Still, catches were “scattered” amongst the patrons as Rich Klein led the way when he managed to collect a limit.

The Sea Star III, with Captain Chuck reporting, had a week of “solid action” that occurred as long as the “drifting conditions were decent.” They had keepers on every trip, plus a number of keepers. While catching fluke they also pulled in a pool-winning, 6.5-pound King Mackerel for Frank Servocky. On that trip, they also lost a Cobia which prompted Captain Chuck to say that he “thought I was in Florida.”

Captain Mike on the Miss Chris reports that “fluke fishing has been good all week.” They had two anglers, Rich and Nan Hogan, who fished with them “all week” during their vacation. Their loyalty was rewarded as Nan took home two pools while Rich grabbed one.

Ray Polnani, fishing with his daughter Anna, won the pool with one of his keepers. They had four keepers between them. Evan Thomas had the touch and limited out during another trip.

The Cape Queen has been catching “flounder, bluefish and sharks, oh my”. Captain’s Andy and Mike have kept their charters busy, and productive. Call them at 609-884-0001 to grab a time and make memories of your own.

Off The Hook Bait and Tackle weighed in a 29.48 pound Wahoo and an 8.48 pound King Mackerel, caught by the duo of Ed Pickup and Joe Tricome.

South Jersey Marina had word of a potential state record cobia caught by Captain Len Andalis. It weighed 90.6 pounds. It was caught while fishing from the Francesca Rose.

The Miss Avalon sends word of a plump 6.29 pound flounder. They are catching some “good ones” as well as some sea bass, kingfish, and triggerfish. They have two trips daily which depart at 8 a.m. and 1 p.m. They are also booking private party cruises for 2020, so it’s not too early to plan ahead. They also have some remaining openings for this year, as does the Avalon Lady.

The little sister of their fleet, the Avalon Lady, is cruising the backwaters and the local inlet for flounder, sea bass, and kingfish. They concluded another round of their Summer Fishing and Crabbing Camps but are still running private party excursions as well as eco-tours. Call 609-967-7455 for more information on either vessel.

First Fish Adventures, on one of their two our trips, took Maddie, Brooke, and their mom Kara out. They had a busy trip consisting of 33 “little weakfish” and one bluefish. Those small weakfish are a nice sign for the future of the fishery. We need to hope there is a lot more out there. They also got to see some dolphins frolicking around on the way home.

Another outing had Jack and Joan out and they experienced some “Mahi madness.” They were fishing with light-tackle, which made the time even better. They “stopped” when they totaled 15 fish.

Avalon Hodge Podge said that Captain Tim McGuire of the Pequot and his crew had a good day trolling lures for Wahoo that resulted in “several” being caught.

Boulevard Bait and Tackle sent word of a “great reef’ outing for Joe, Austin, and Dan. Seven keeper Fluke were caught during their outing. Those results prompted Cameron the shop owner to grab some friends and head to the reefs. They finished with 10 Fluke to 23.5 inches, Sea Isle Bait and Tackle reported that Captain Joe Cunningham of Relentless Fishing NJ was out spearfishing recently. He was rewarded with a potential (for spear fishing) New Jersey state record Cobia. He speared a 74.5 pound, 56 inch-long specimen. The current record for a speared Cobia is 60 pounds. That fish was also 56-inches in length.

The Sailor’s Delight had another good week of catching flounder with keepers to 19.5-inches, Sea bass, weakfish, “nice-sized” bluefish and kingfish. One catch of note was a “beefy” Northern Kingfish of 14-inches. Stop on down, hop on the orange boat, and go catch some fun. Call 609-827-8309 to check on the schedule.

“Excellent” flounder fishing was reported from McCrie Shoal, Overfall Shoal and the Cape May Reef. While pursuing flounder, some anglers were “surprised with some of the largest Cobia we’ve seen in years.” Cody Smith landed a 60-inch, 62-pounder while 18-year-old Will Long  “checked in” with a 72 pound, 55-inch Cobia of his own. The fish had a 33-inch girth. Both of these fish were caught at McCrie Shoal.

Trolling inshore is an “excellent” place to target Bluefish, King Mackerel, Spanish Mackerel, Mahi-Mahi and Bonita, while if you head offshore to the canyons “there is an excellent White Marlin bite,” some Tuna, plenty of Mahi-Mahi, plus the occasional Blue Marlin.

If you end up in the back bays or near the inlets, you can still expect to catch Flounder as well as Bluefish.

The surf in North Wildwood and Wildwood Crest has plenty of Kingfish, Spot, and mall Flounder that are hitting bucktails tipped with Gulp.

Crabbing was described as “excellent” as “plenty of large crabs” were caught “over the weekend” in the back bays behind the Wildwoods.

Peace Token Fishing Tackle sent word of an “awesome day of fluke fishing aboard the Fish Hawk Charters.” They had a full boat limit as Dong Chun Lee had the “biggest keeper” of the trip. High hook was Joseph Chupungco while second high hook honors went to Young Han Lee. Robin and Mike Jung contributed their limits to the trip also. They send a “big thank you” to Captain Joe Weinberg and mate Anthony for a “memorable” trip.

Keep fishing, and let me know how you did.