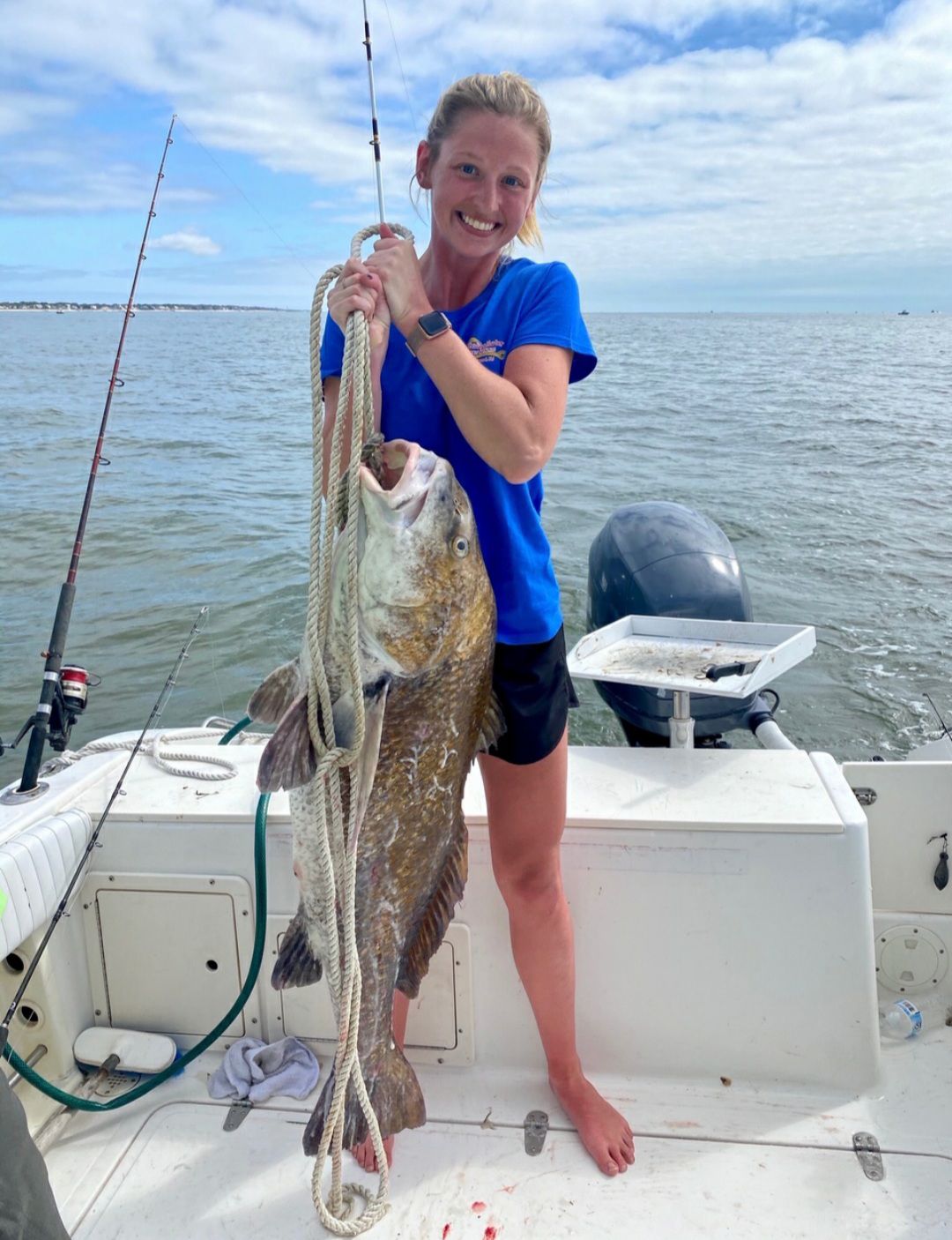 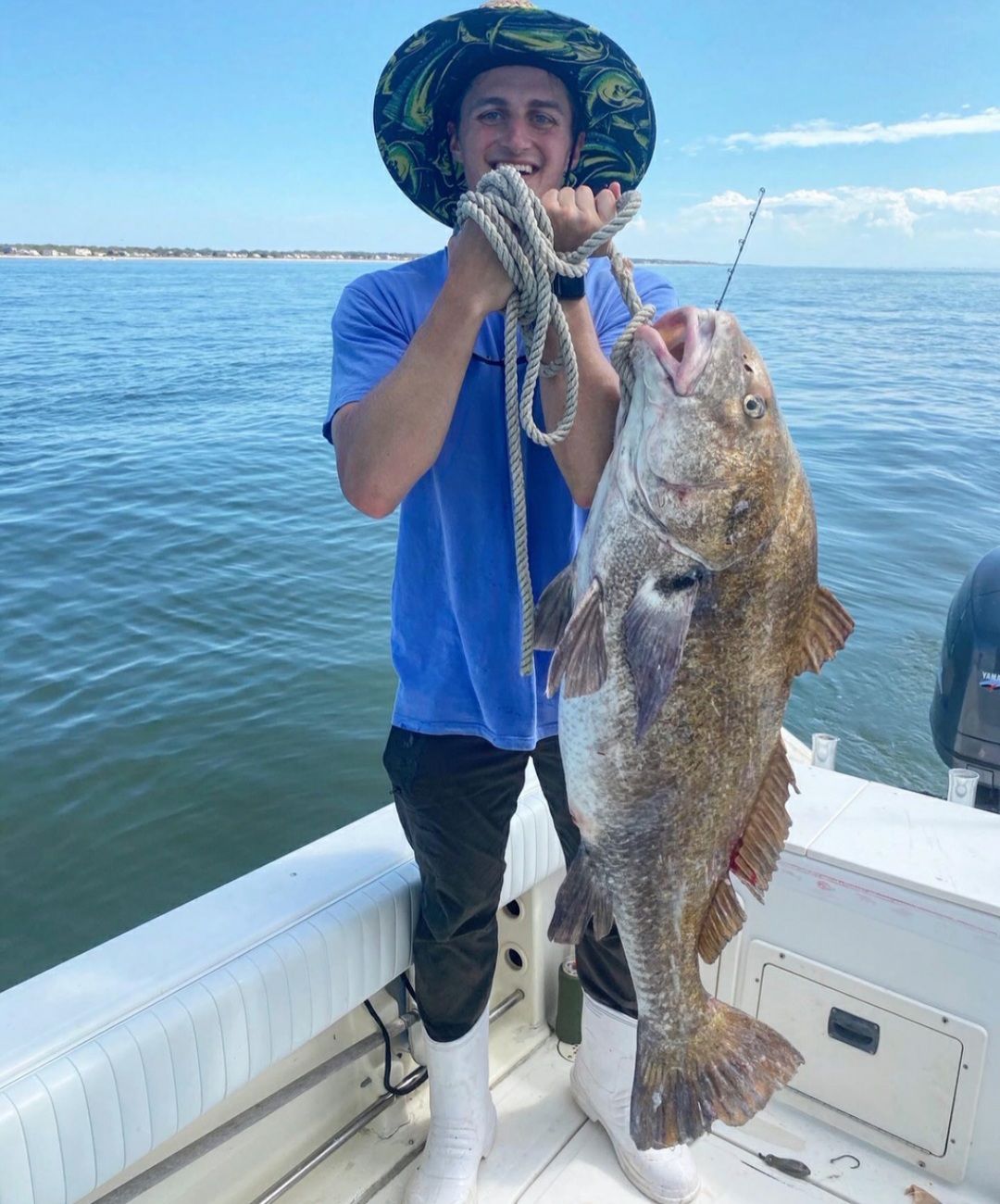 Joseph Kane and his drum fish. 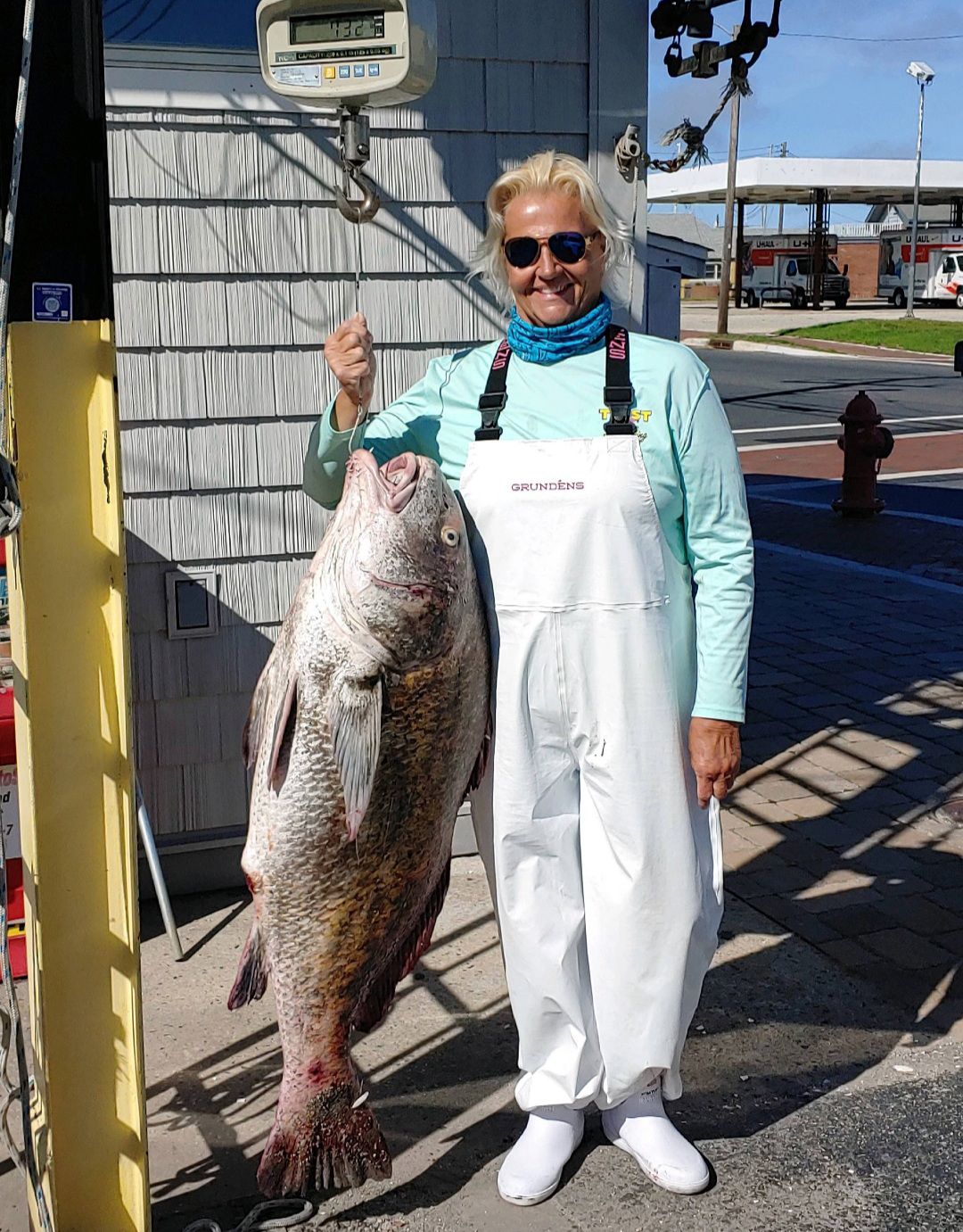 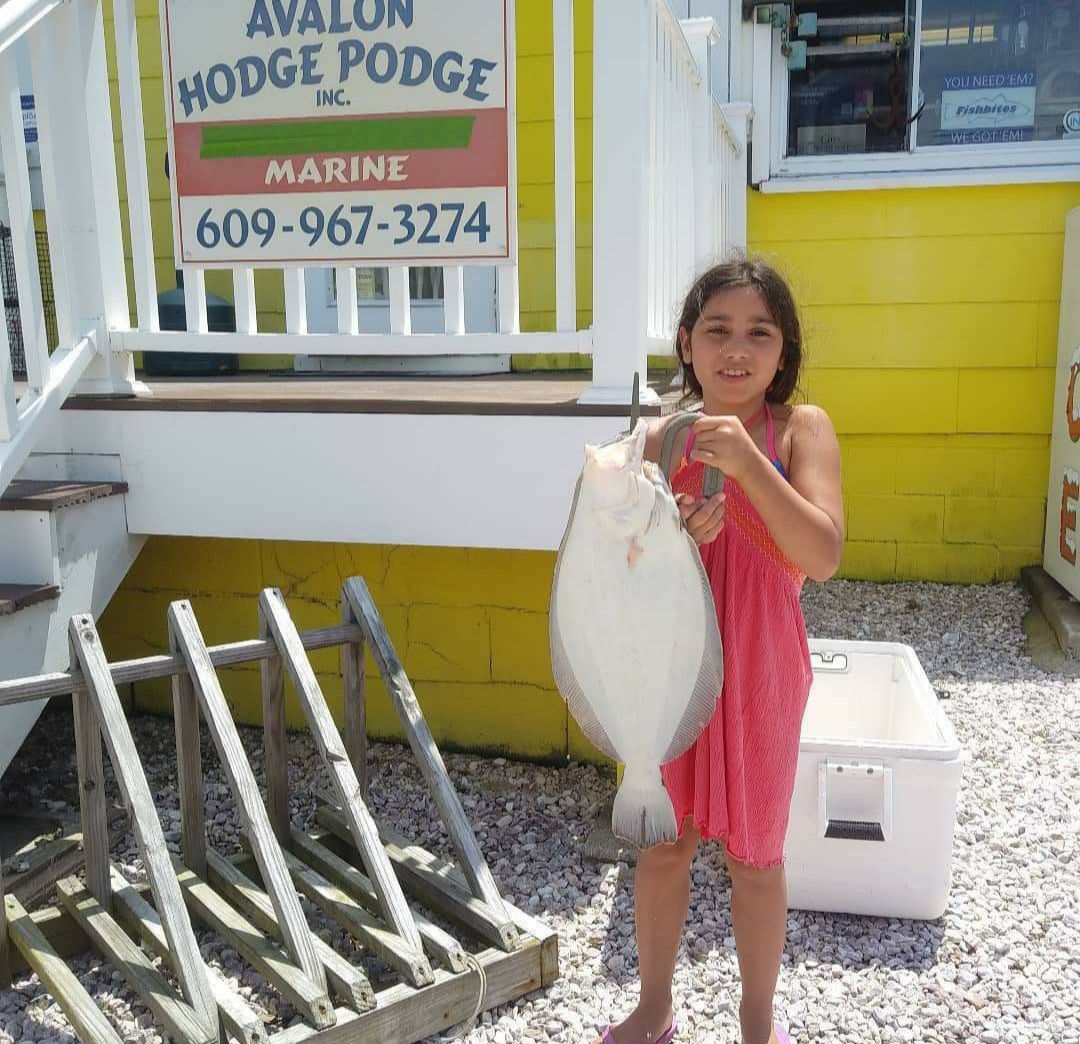 Payton and her 22-inch flounder. 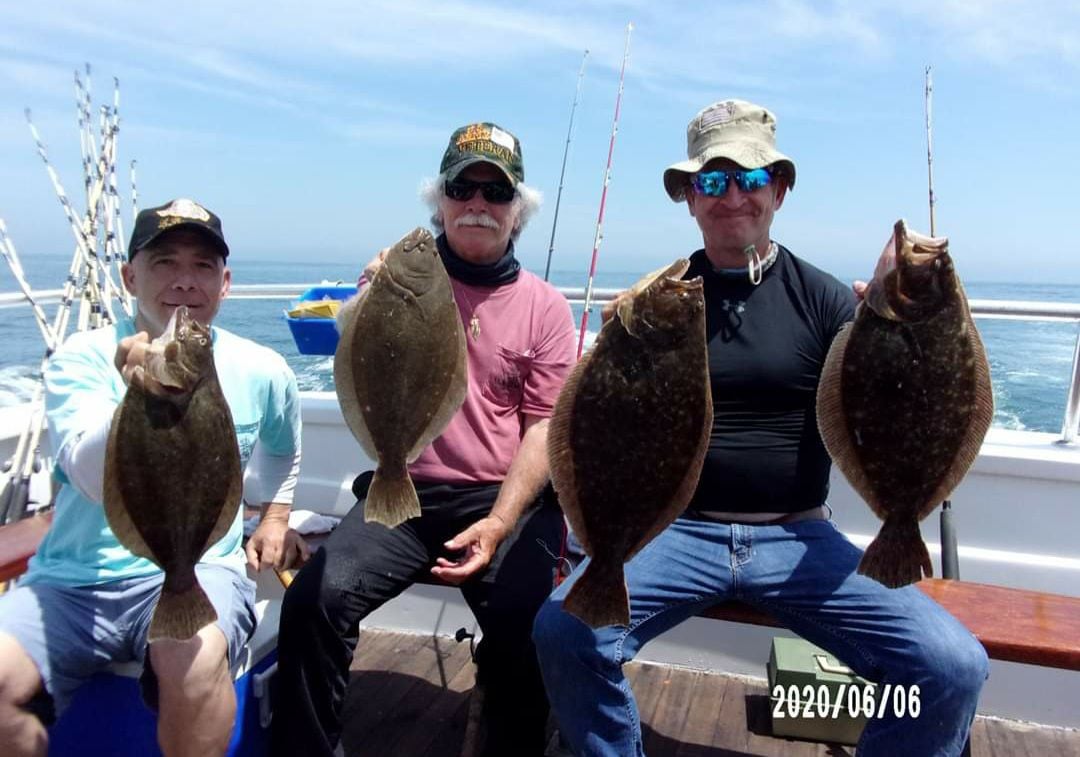 Happy anglers and their flounder.

The nice weather over the weekend led to many people getting out onto the water. It was a little breezy, but nothing too serious.

The biggest problem happened when the changing tide and the wind teamed together to hasten the drift up too much. Moving along too fast made for some challenging conditions. If you were in the back and could get up against the marsh, away from the wind, then you had the opportunity to get a decent drift.

Cathy, from Sterling Harbor Bait and Tackle, reports “very good” flounder fishing behind Wildwood. Todd Spence and the Slick Willy's crew caught six keeper fish up to 24 inches. The baits have varied with live minnows, mackerel strips or Gulp on bucktails proving to be favorites.

Head to the jetties to get weakfish. Float some bloodworm under a bobber, or toss a light bucktail tipped with Pink Zooms or Fin-S-Fish.

Drumfish are still in the bay, and fishing for them has been great when you can get fresh clams. They have been in short supply recently. Sea Bass fishing at the local reefs and out to the 20-Fathom Line “has been excellent."

Recent crabbing outings were slow due to the full moon, but have already begun to improve once we moved past that phase. They’re great table fare, so try to get some if you have the chance.

Sterling Harbor will hold the 27th Annual Duke of Fluke Tournament July 27. Modifications will be in place for everyone's safety. Stay tuned, as more details will follow.

The Sea Star III had their first full week of fishing since last year. That’s too long of a wait, but unfavorable weather and the current situation caused that.

The reefs were producing nice numbers of sea bass, plus some fluke that started appearing. The fluke bite was reported to be “slow," with both keepers and shorts being caught, but should improve with time. That’s still great to hear, as they are a summer staple in the local fishing scene.

The Miss Avalon had nice trips recently when they sailed for sea bass. They caught them, along with others, as they started to catch some kingfish also, and yes, keeper flounder are also starting to find their way into the fish box.

The Avalon Lady, working Avalon's back bays, has been catching both keepers and short flounder, some weakfish and also bluefish. They also caught a sundial during a recent trip, which allowed the anglers to see another species that lives in our local waters. The back bays are providing a variety of action if you are ready.

The Sailor’s Delight is running three trips daily, with flounder, bluefish and weakfish being caught. They also recorded the catch and release of a sundial. Their success has been spread across all three trips, but fishing in the evening, as the sun goes down on another day, just has an interesting appeal to it, but don’t sleep on that morning trip either - no pun intended.

First Fish Adventures, in Sea Isle City, was busy putting their patrons on flounder recently. Renee, Emerson, Claire and George enjoyed a productive flounder outing in the back bays. Capt. Zig also runs out front for sea bass, flounder, kingfish, and whatever is hot at the time. Check them out for a relaxing trip.

The Bayhound, with Capt. Al, reported a solid week of trips. His anglers filled their coolers with sea bass and ling. If you're targeting sea bass, you have a strong chance to also bring home ling, as multiple reports mentioned this week.

Boulevard Bait and Tackle recorded two flounder over 5 pounds. A 5.1-pounder was part of the catch for Jim and his friend, while Lisa weighed a 5-pound, 24-inch flounder she caught at a local reef. Quality three-fish limits went to Mr. Jack and PJ Steinie. Also, Sawyer, a young lady angler, came in with a 3.1-pound flounder.

Cameron reports that kingfish are appearing in the Sea Isle and Strathmere surf. The best proof was brought in by Chuck, who weighed a 2.29-pounder. It was reported to be the largest that Cameron has seen. Tasty eating and easy to catch means it’s time to grab your pole and head to the water’s edge.

Avalon Hodge Podge weighed several nice flounder recently. One, a 24-inch, 5.34-pounder, went to an angler named Dan, while a young lady angler, Payton, stopped in with her 22-inch fluke that she caught on a bucktail.

Two nice tuna were recorded for the Avalon Invitational. The Island Girl weighed a 102.4-pound bluefin, while the Endorfin checked in with a 29.2-pound yellowfin.

Sea Isle Bait and Tackle continues to have nice flounder brought through the door. A group of happy anglers brought some in recently, with the highlight being a plump 4-pounder.

The Cape Queen, with Capt. Mike and Capt. Andy, hosted the Saville family for a recent charter. They spent the day catching sea bass and totaled 30 keepers upon their return. Ethan, a family friend, won the pool. It was his first time catching a sea bass.

The Cape Queen is also running drumfish charters and will be heading for the bay soon to do some catch and release shark fishing.

The Porgy IV, led by Capt. Paul, was catching sea bass, but will now focus on flounder. Ken Minett won a recent pool with a 23-inch flounder, as more flounder are starting to emerge. Sea bass pools went to Barb Eppling and George Schmidt, who limited out, while another limit went to Jason Wrzenski.

The Cape May Lady continues to sail for drumfish. If that's your quarry, check to see when they are sailing. They will be running trips for sea bass and flounder, plus some offshore trips. Remember to check ahead so you know what the trip is for and when to arrive at the dock.

As an example, they recently took a “trip to the edge." They went out and were targeting tilefish. They got those, some rosefish, and other deep-water dwellers.

The Starfish continues to experience “excellent” sea bass fishing. Their patrons have also caught ling, so they will be having some savory dinners. They should also be getting into some flounder soon since they are arriving.

Judy Shoffler sent in a report of her trip on The Journey, with Capt. Ron Rookstool Jr. She caught a drumfish, stopped into Jim’s Bait and Tackle, in Cape May, and saw the scales stop at 73.4 pounds. Nice effort, Judy and Capt. Ron.

Local angler and Facebook follower Trevor Seits reported a nice trip he and some friends had on the Pequod. Capt. Tim McGuire put them on tilefish, with the biggest weighing 30-pounds. They also caught and released four short bluefin.

Thanks to Carol Kane and family for submitting a report following their recent trip on their boat, the Citizen Kane. They were drumfishing, and daughter Caroline caught her first drum. Her fish was also larger than the one caught by her brother, Joseph. They were using clam for bait.