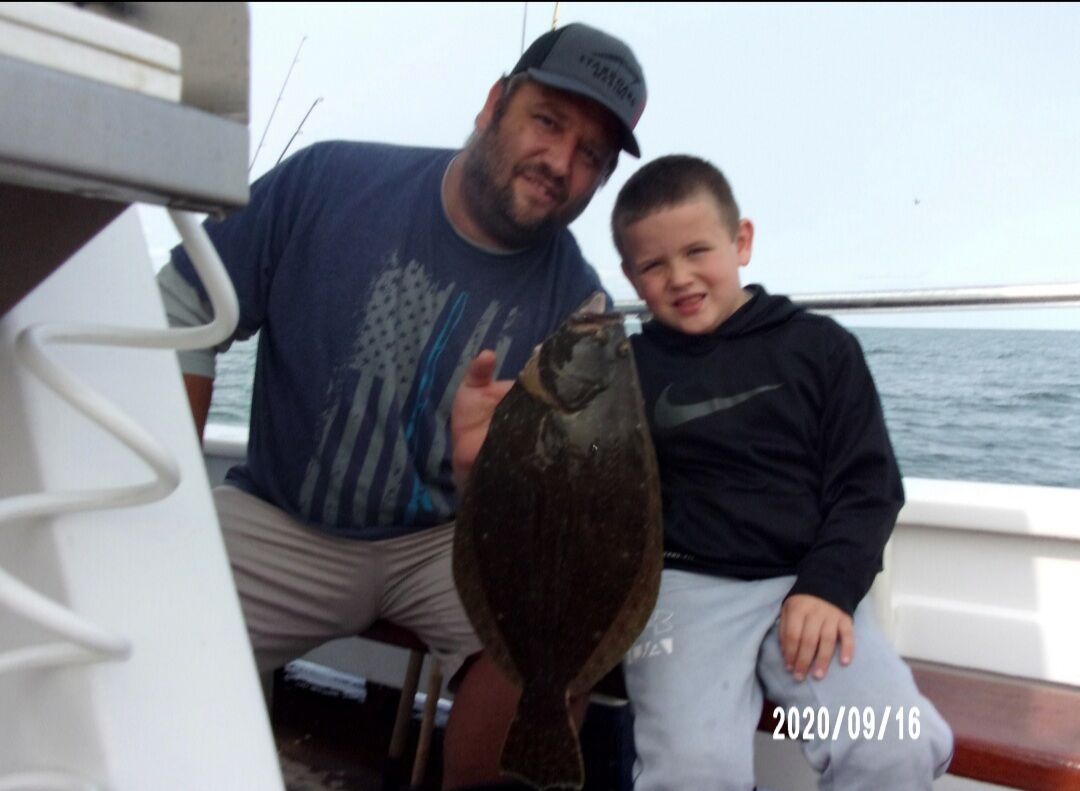 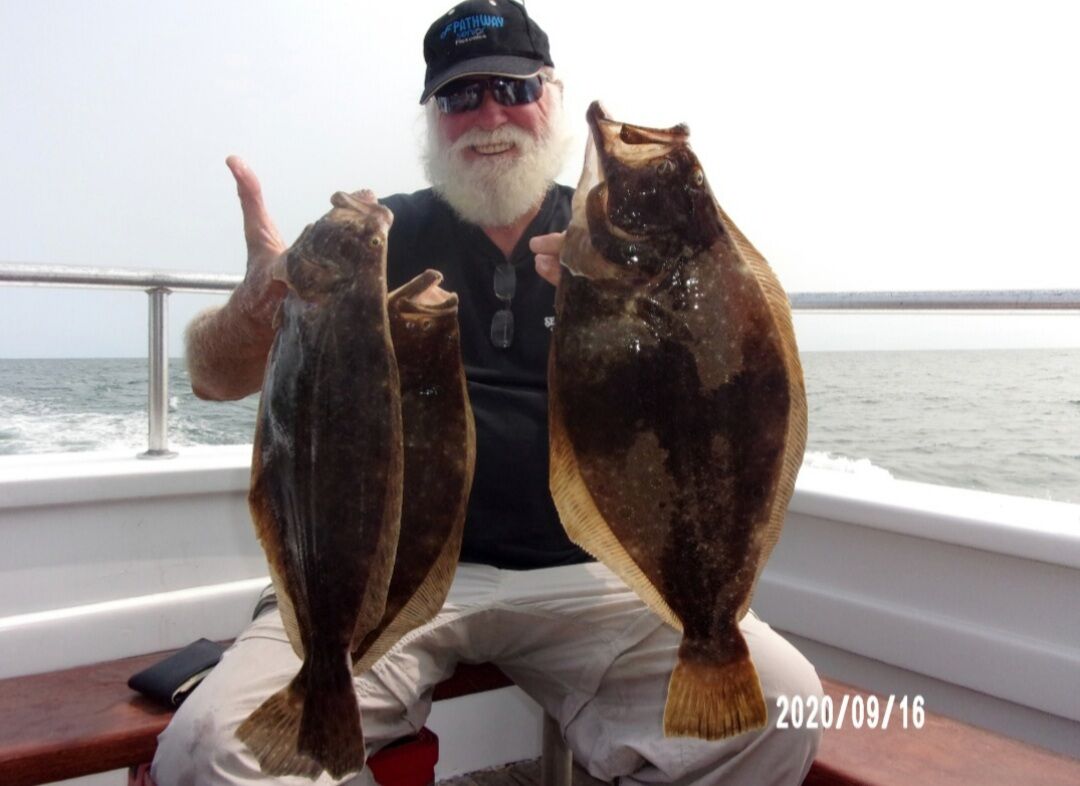 A season-ending limit for Paul Bodkin. 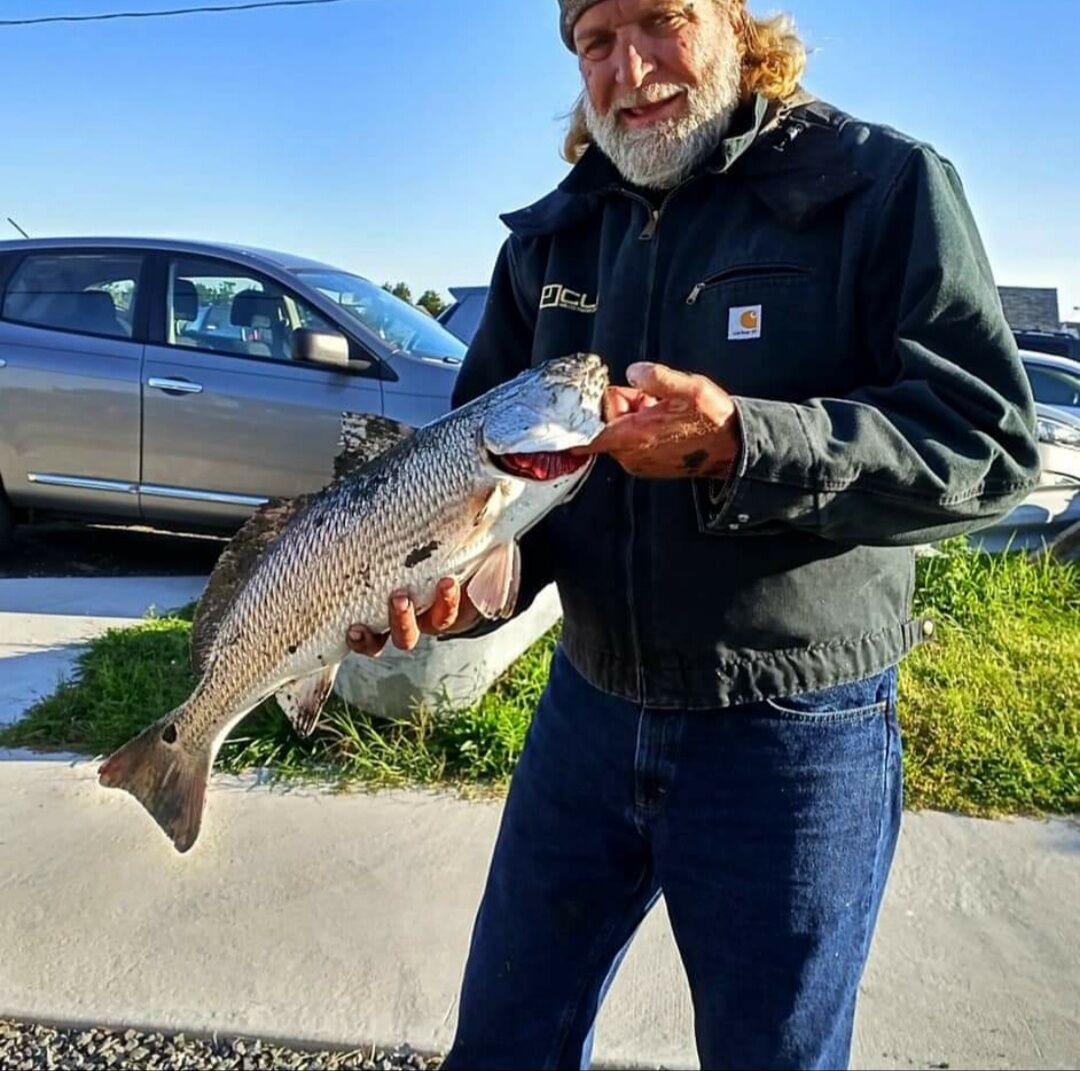 Happy anglers with their 65-pound wahoo. 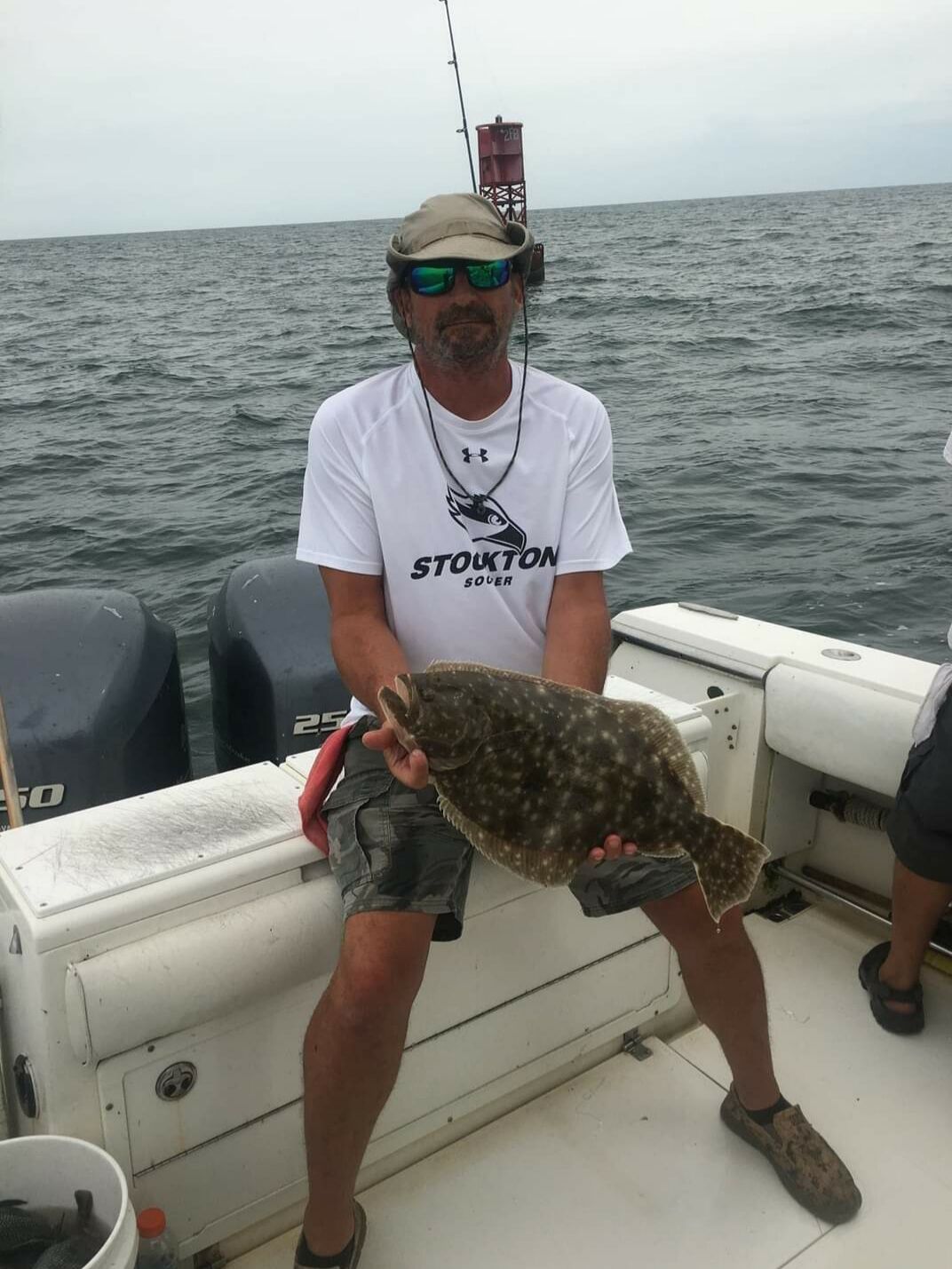 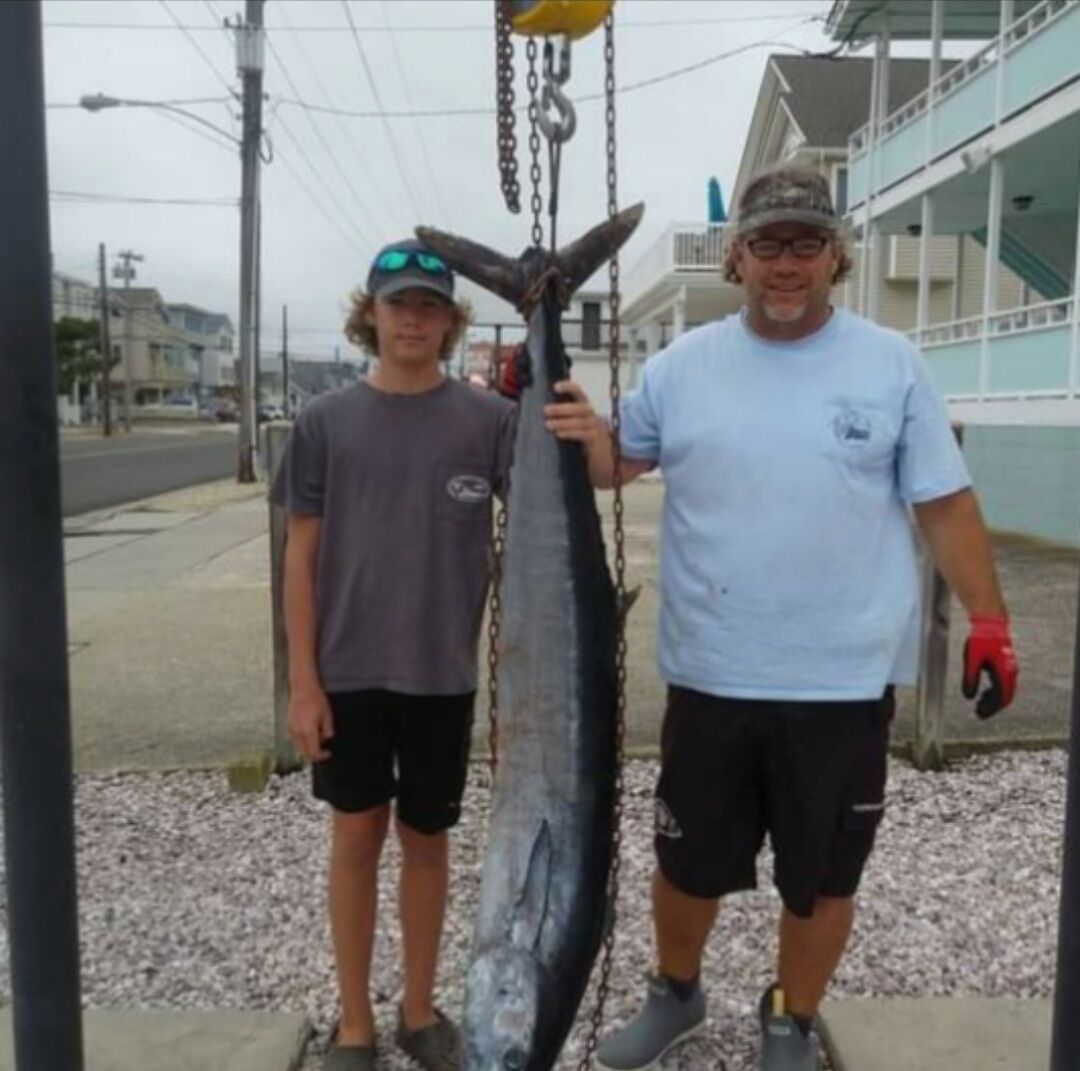 Scott Lemmerman and his red drum.

This lull between seasons, with flounder ending and sea bass yet to begin, seems peculiar.

The flounder season, disregarding the last few days of the season lost to the weather, was productive to the end, and then it ended, as all seasons do, but it seemed abrupt. Flounder one day, but not the next.

I’m attributing this feeling to the success many anglers had this year. I expected to hear about nice catches almost daily, which I did, and then there were none. I received reports from flounder season's final week, plus other fish were caught, so let’s see what transpired.

Capt. Mike, from the Miss Chris, reported a challenging week due to the windy conditions. Regardless, he reported that the “bright spot” was that bluefish appeared in the rips. They kept his patrons busy with the powerful fights that they provided. He’s looking forward to some calm weather along with everyone else.

Capt. Chuck, from the Sea Star III, also mentioned the weather early in his report. Despite the conditions, his anglers finished the flounder season “strong."

The final week's top angler was Paul Bodkin, who claimed two pools by catching a 2.5-pounder for one win and a 4.75-pounder for the second. The second winner was part of a three-fish limit. Nice job, Paul, and congratulations.

Bill Buchecker also won with a nice 4.4-pound fluke, which means these two anglers claimed the final pools that were won with fluke. Other pools went to Frank Servocky, who took home two, with 1.0 and 1.5-pound bluefish. The final pool fish was a croaker that weighed 1 pound and was caught by Ryan Seaver.

The adjusted schedule for the Sea Star III finds them fishing on Fridays, Saturdays and Sundays for the several upcoming weeks. They will be fishing for bluefish, croakers, kingfish and weakfish.

Two other regularly mentioned boats, the Porgy IV and the Miss Avalon, will be taking a break before resuming their trips Oct. 8, as they, too, will hunt sea bass. The Miss Avalon is planning an eight-hour trip that day that requires reservations. Please email your phone number and the number of people in your group to Capt. Irv as soon as possible.

You should also call Capt. Paul, on the Porgy IV, and notify him of your desire to be at the rail opening day. Get in touch with the boat of your choice, so you can ensure you're on the fish. You don’t want to be left out.

Avalon Hodge Podge reported two excellent offshore catches, a 65-pound yellowfin tuna, caught by 12-year-old Shane Loughran, of Ambler, Pennsylvania, and a 65-pound wahoo, caught by Chris Scully. Caught on the Buzz Kill, captained by Brian Loughran, these fish were among 14 tuna and five mahi-mahi. It sounds like they had a prolific trip.

Grassy Sound Marina reported a nice catch for Scott Lemmerman. He was fishing from one of the docks, and his rig was furnished with a piece of crab. His efforts paid off, as he pulled in a solid red drum.

We get these fish occasionally, but it never seems to develop into a steady bite. This is the first I have heard of this year, so let’s hope that the nice weather and favorable water conditions draw more to us. It would be pleasing to see if a population of resident fish could develop here. The winter water temperatures would present the greatest challenge, but these fish can tolerate water temperatures as low as 39 degrees.

The Sailor's Delight is running back bay trips for bluefish, weakfish, kingfish, stripers and, when they come into season, sea bass. They are sailing from 8 a.m. until noon and 1-4 p.m. Call them, at (609) 827-8309, to book a reservation.

I’m hearing that crabbing has been transcendent lately. That would be a great activity during the nice days, plus it would give you a chance to catch a tasty dinner.

The slow pace this week isn't a bad thing. It seems everyone exhaled after the rush at the flounder season's conclusion, and some chose to grab some downtime. There’s nothing wrong with that as we prepare for fall fishing. Take care and I’ll see you around.