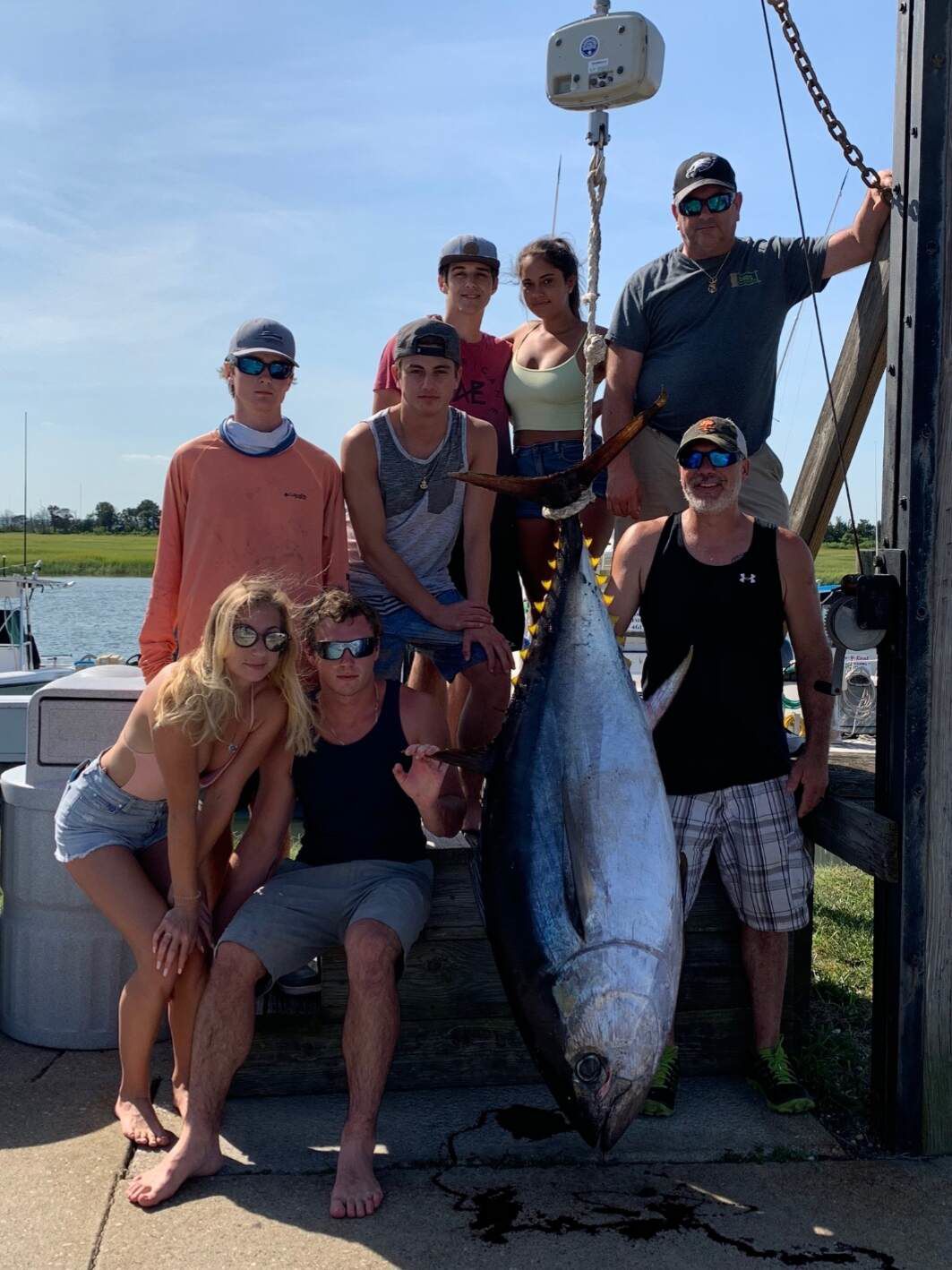 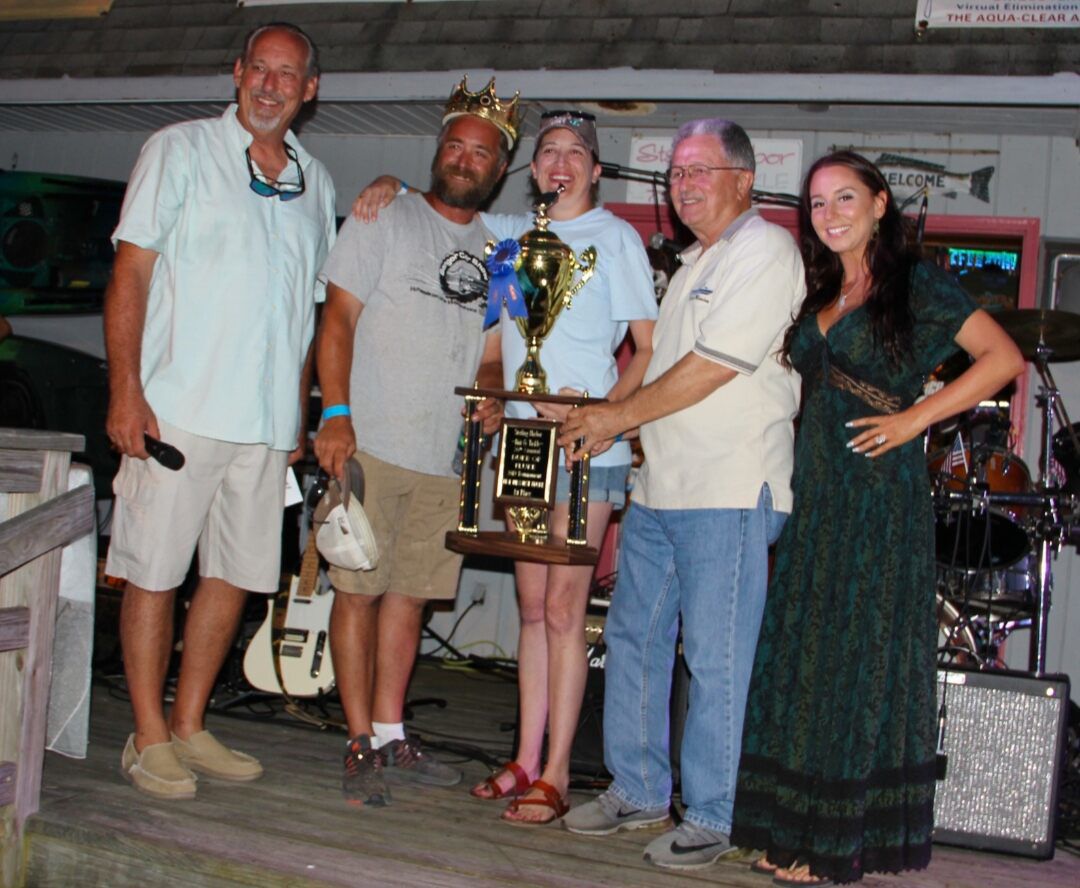 Captain Tom Daffin (second left) from the Fishin’ Fever and wife Kathleen (center) with his trophy for the Five Heaviest Fluke. 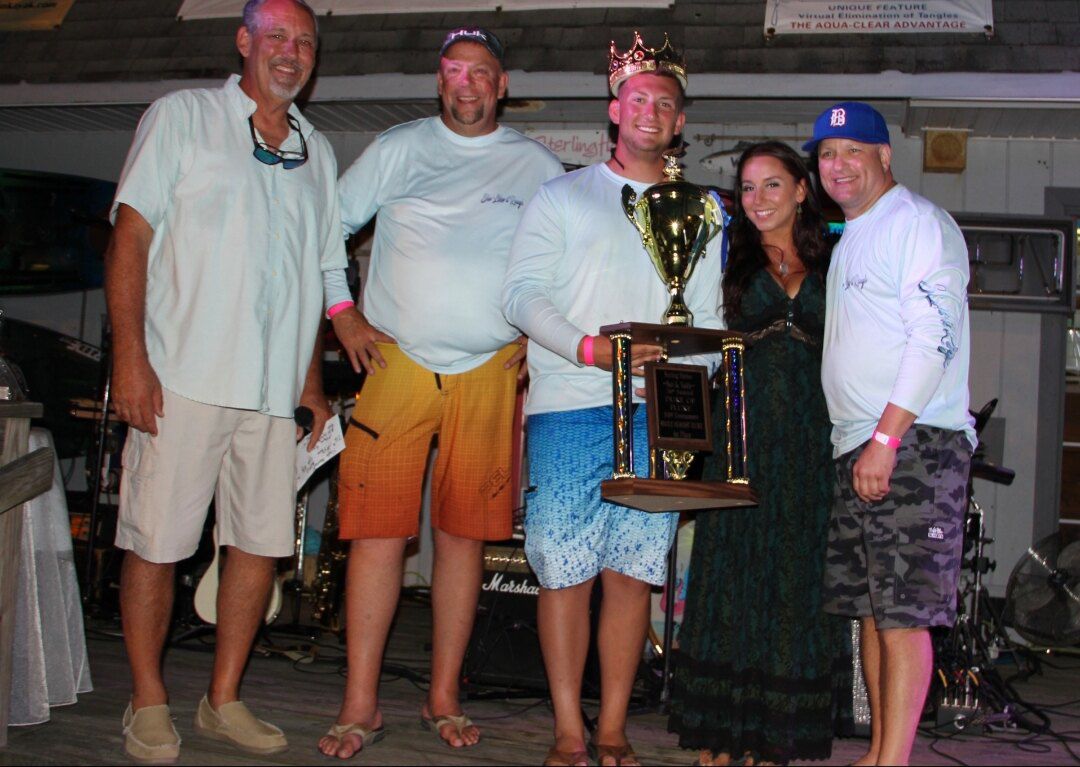 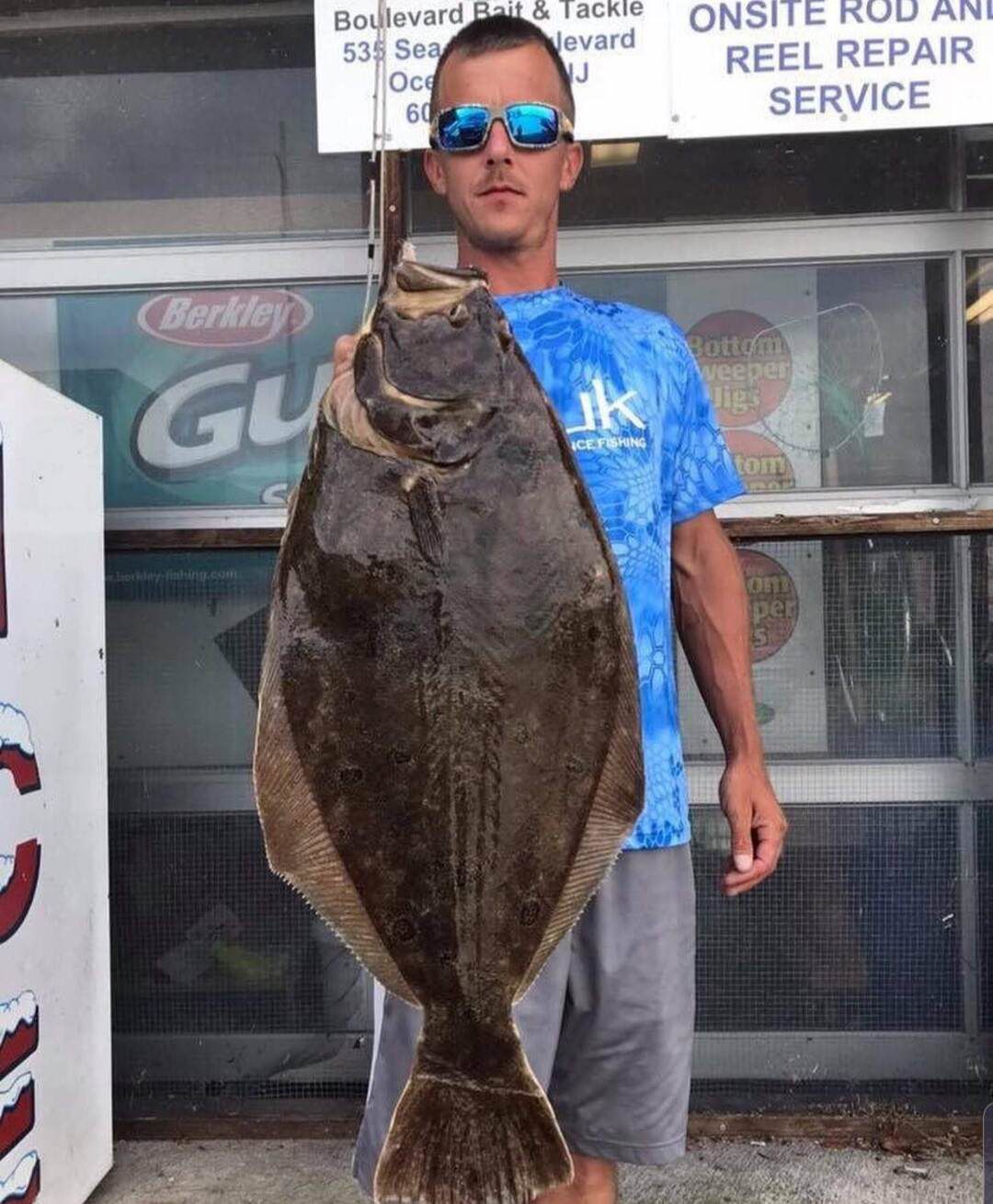 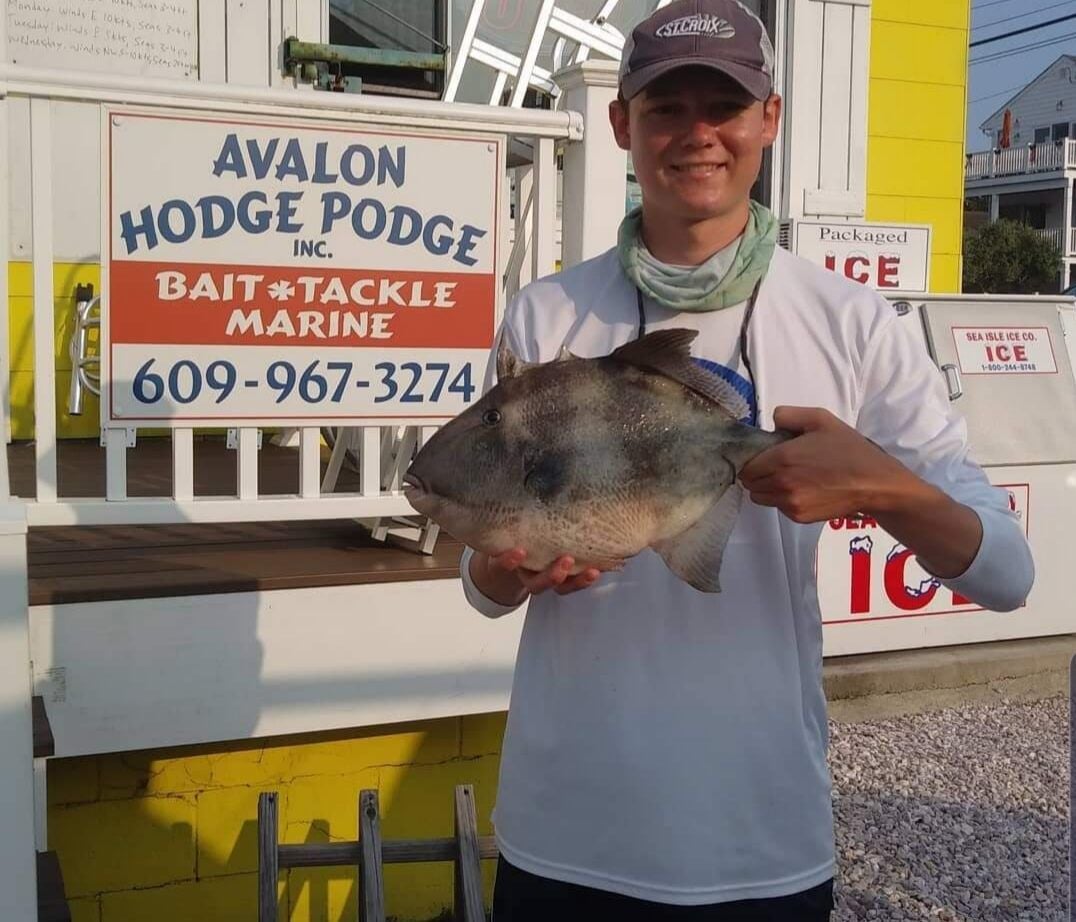 Captain Tom Daffin (second left) from the Fishin’ Fever and wife Kathleen (center) with his trophy for the Five Heaviest Fluke.

Another week of the heat rolling along, but thankfully the fishing has been rolling right with it. This week saw another few local flounder tournaments take place so we’ll check out what happened. Others were out catching fish when their opportunity arose. Let’s check out what everyone accomplished.

Sterling Harbor Bait and Tackle hosted the 26th Annual Duke of Fluke Tournament on Saturday. One-hundred eleven boats and 37 kayaks entered so there was plenty of competition. Let’s see who the winners were. Weights, in pounds, are in parenthesis, followed by the boat’s name.

In the Kayak Division, the winner was Mike Brier with a 2.36-pound.

The Junior Angler award went to Isaac DeHaven with a 3.18-pound fluke caught aboard the Lil Chaz.

The Duchess Award went to Patricia Dameron who landed a 4.65-pound fluke while fishing on the Patricia Lynn.

The Heaviest Sea Bass award went to Captain Wayne Reichle (3.65) aboard the Feast or Famine.

The Heaviest Bluefish Category was won by Captain Rocco DiPasquale of the Rock On with a 2.34-pound fish.

The Sailor’s Delight has been catching flounder “across all three trips” as the action is solid. One observation from all the action is that the evening has produced “bigger fish.” You have to figure that the increased boat traffic of the day has the bigger, wiser fish going off to some quiet areas before returning in the evening. There are some keepers mixed in, but 17.5-inches seem to be a popular size amongst flounder right now which leads to lots of throwbacks.

The Cape May Lady has had “good action” on their morning, afternoon and evening trips. Flounder, triggerfish, and kingfish rule the day while the night trips have been dominated by bluefish. Their night trips get underway at 6 p.m. so don’t be late.

Grassy Sound Marina reports that flounder, sea bass, small stripers, and kingfish are being caught from the pier. And don’t forget the crabs. A notable catch was made by Mary Bohrer as she and her husband went out on their boat for some early morning fishing. Mary gained family bragging rights by landing a “beautiful” 24-inch, 4.8-pound flounder.

Boulevard Bait and Tackle weighed in a quality flounder that now leads their yearly flounder tournament. The new leader is Beau Sleeter who landed a 25.5-inch, 6.37-pound fish. Another nice flounder, this one caught by Joey G, went 4-pounds. He and “his crew” hit the “reefs” and finished with “nice ones.” Another group, Mark, Kylie, Christopher, and Chris, caught seven nice keepers during their reef outing. Luis targeted kingfish and found some at a local inlet. As the report said, “kingfish are everywhere.” Grab some bloodworms or Fishbites and head to a local beach to get some.

The Miss Avalon has been visiting the local reefs, and while there has been catching flounder, triggerfish, sea bass, and kingfish. They are running two, 4-hour trips daily, including a Ladies Day. On Sunday, the boat sails from 8 a.m. to 1 p.m., so you get five hours of fishing for the price of four.

The Avalon Lady had nice outings recently including one morning trip that produced over 100 throwback flounder. That morning had 5 keepers, plus some kingfish and some bluefish which helped to keep everyone busy.

Avalon Hodge Podge weighed in some very nice triggerfish recently. Tim got one while spearfishing that weighed 3-pounds, 6-ounces while Ben Anderson caught a 19.5-inch, 4.5-pound fish. He used clam as bait while fishing from the 8th Street Jetty. Another angler, unnamed to protect his identity, caught some Spanish mackerel and a 14-inch triggerfish from the surf.

First Fish Adventures is having fun putting their charters on the fish. Whether it’s the three Murphy boys, Tommy,9, Patrick, 7, and Brendan, 3, who had lots of action with flounder, kingfish and sea robins or Dave from Pier 88 who fished with his brother, sister, and friend and had a “nice day on the ocean” which was made even better when “the Bonita cooperated.”  They also “had a good day offshore” as Paul Jr. and his friend Tim landed some “kings, sea bass and Bonita.”

Captain Chuck reports that the Sea Star III had “some nice fluke this week.” Things are “looking up” as some small blues as well as triggerfish were also added to the daily take of fluke.

Pools taken by bluefish, with weights, went to Frank Servocky with two (1.0 and 1.5) and Bob Ruitenberg with a 2-pounder.

The Miss Chris has been catching flounder, kingfish, and bluefish. Nick and his family recently caught a 4-hour trip and then proceeded to catch “a stringer” of bluefish. A neat catch of note was a baby thresher shark that was caught and then released to grow and fight again another day.

Off The Hook Bait and Tackle weighed in some nice fish recently. Amongst them was an 8.31-pound flounder for Tony Tancredi and a 43.8-pound Golden Tilefish caught by Frank Scittoto while fishing on Bill Stewart’s Tuna Can.

The Porgy IV has their patrons on the flounder recently as Bob Baales can attest. He landed two keepers and won that days pool with a 21-inch fluke. Rudy Fristachi won a pool with a 22-inch fish on a day when some other anglers landed a couple keepers each. Pat McDonald had a 23-inch winner which was amongst a total of five keepers that his family caught. Matt Lamelza won with his 21-incher, one of his two keepers that day. Limits went to Al Bednarik and South Philly Joe.

The Hooked Up II reports warming water, up to 80 degrees, in the local southern canyons which may cause “the days of double-digit yellowfins to be pretty much over.” The “silver lining” is that marlin “are showing up in good numbers now.” Joining them are Mahi-Mahi, wahoo, and tilefish. You also have “a chance” at Big Eye tuna either at sunrise or late in the day. And, as in years past, the yellowfin “may show up inshore along the 20-30 line lumps and hills.”

On a recent outing, they went 5 for 8 on the yellowfin bite. They had 2 short bites and another where the tuna hit squid bait on a spreader bar that had lost its hook. Regardless, “it was not a bad catch considering the warm ocean temps”.

From the mailbag: Thanks to Tiffany Seddon for sending in word of her husband Dan’s nice catch of a 63-inch, 198-pound Big Eye Tuna. Dan was fishing with family and friends from Tony Galdi’s boat, the Kimberly Jo. Thanks for sending in word of that nice catch. Also, don’t forget that the 2019 MidAtlantic is set for Sunday, August 18 through Friday, August 23. The tournament will have the Canyon Club Resort Marina in Cape May as its home port while using Sunset Marina in Ocean City, Maryland as a satellite port. The tournament features large cash prizes which are generated through various Calcutta options.

Alright, take care, tight lines and I’ll see you around.