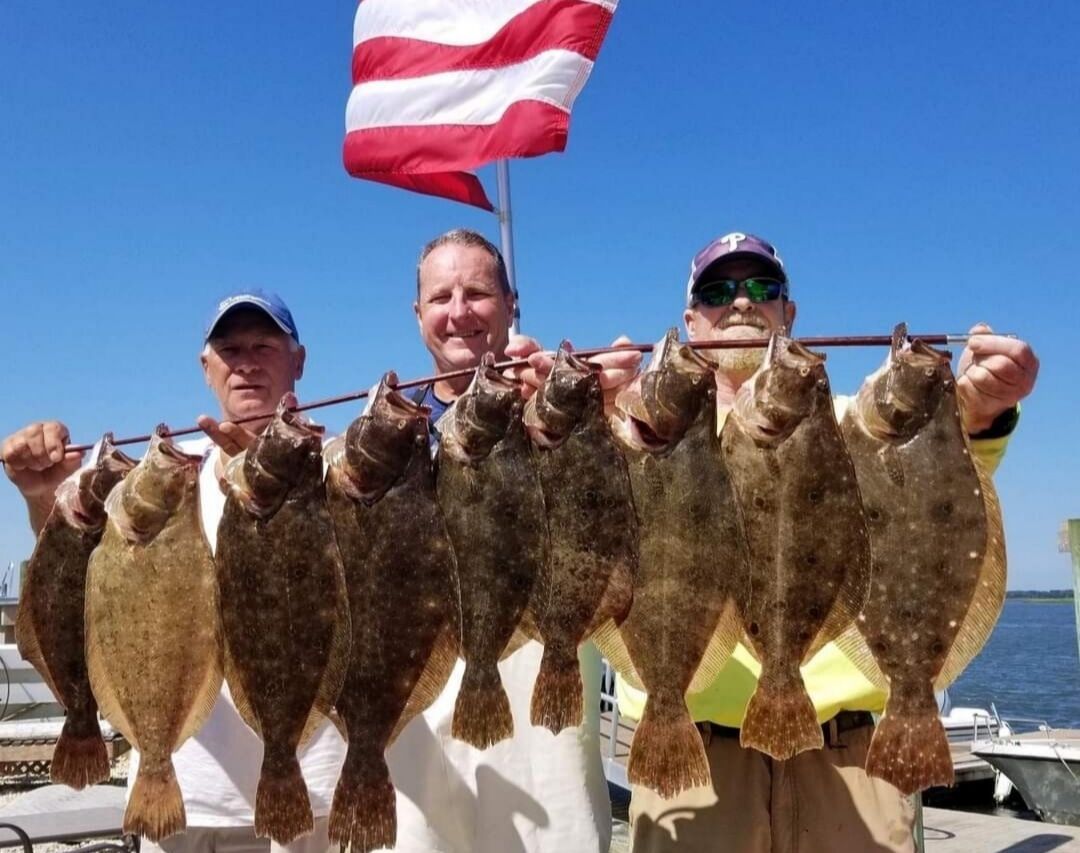 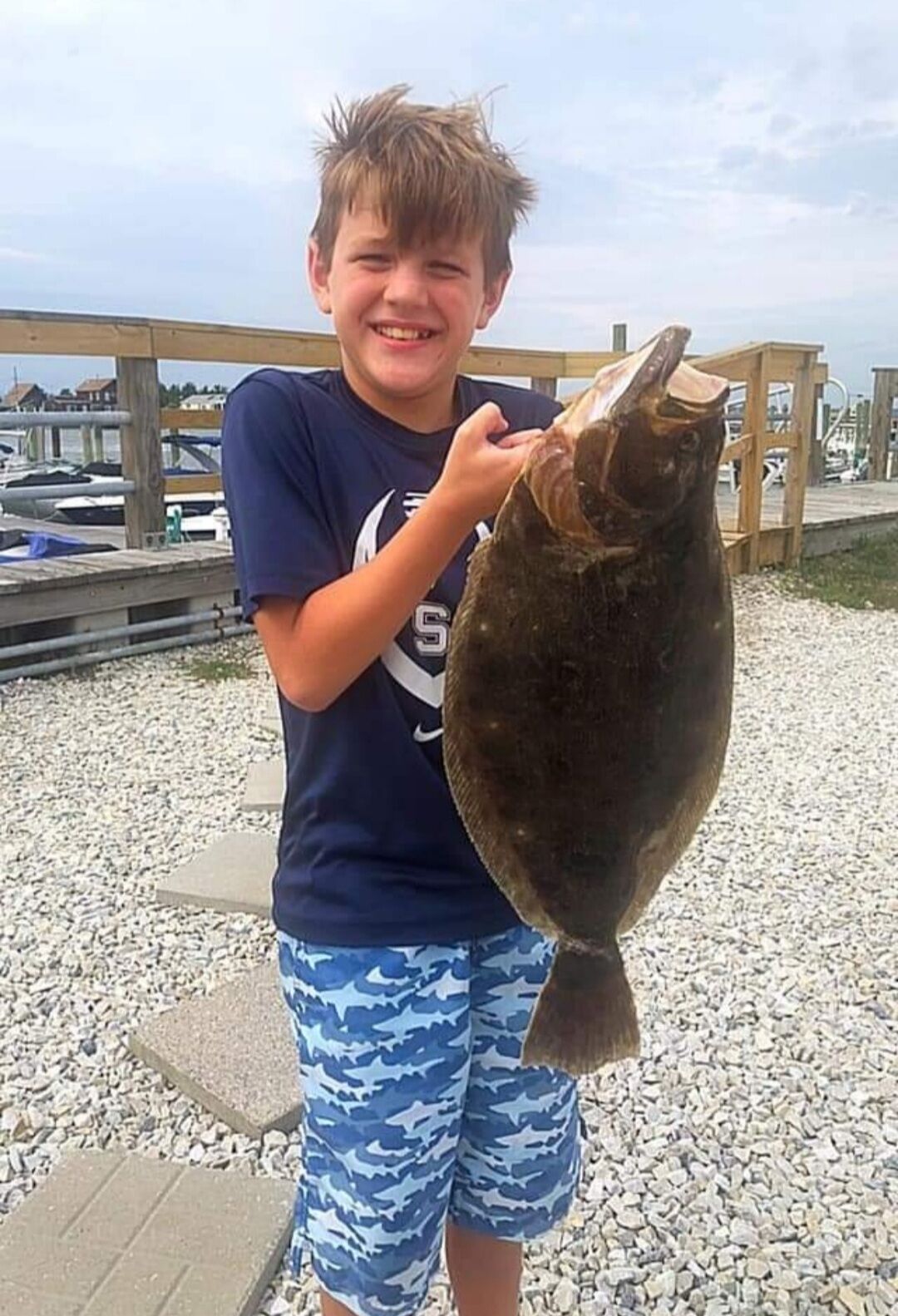 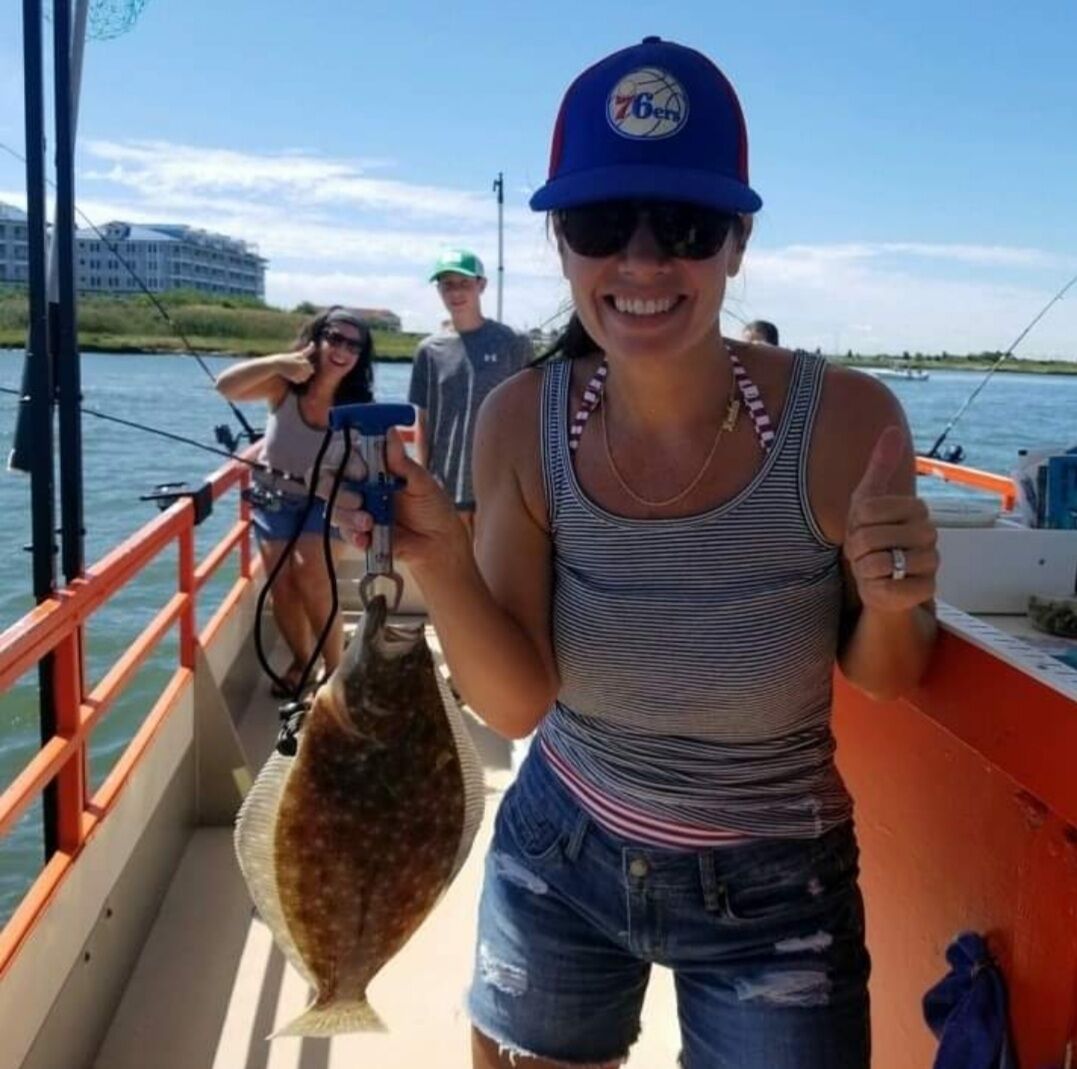 A happy lady-angler with her catch. 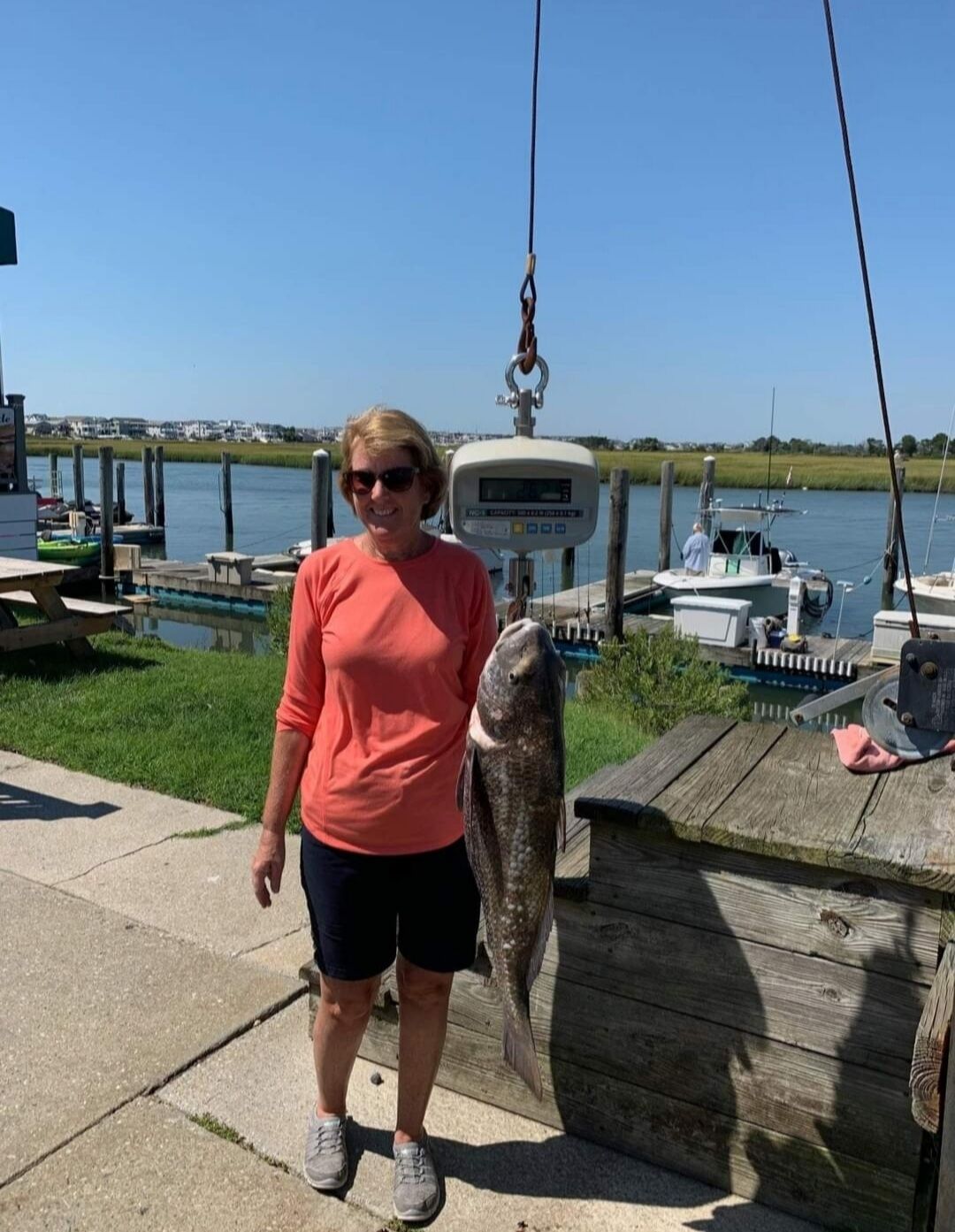 Barb Tudor and her 26.2-pound drumfish. 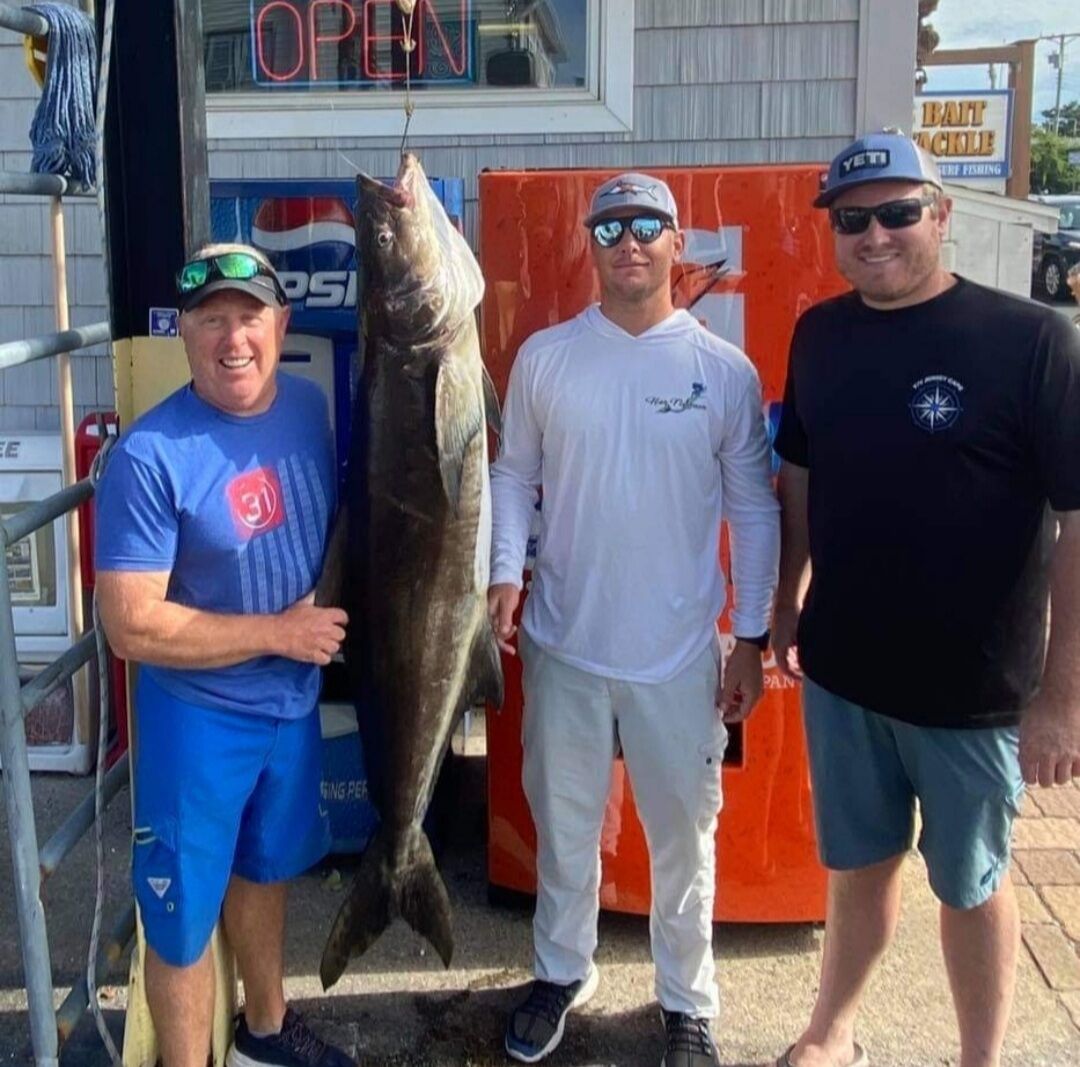 Brian Brown and friends with his 74-pound cobia.

With that recent stretch of cool weather, it was easy to think about fall fishing.

Visions of sea bass, blackfish or stripers trips started filling my mind. However, we shouldn’t jump ahead too fast since there are a few more days for summer flounder and stocking fillets for the freezer.

In addition to the remaining flounder fishing days, triggerfish, croakers, and the occasional bluefish are still being caught, each of which remains as respectable quarries, so don’t ignore them.

Also, remember sea bass are out of season till early October.

The Miss Avalon continues to catch flounder and triggerfish at the local reefs. They have also picked up the occasional weakfish, blowfish and kingfish. They, like other anglers in the area, are experiencing a nice, late summer mixed bag. While flounder fishing Sept. 7, anglers Bud Byrnes and Barb Tudor made the untargeted catches of drumfish, one being 30.5 pounds and the other 26.5 pounds.

The Starfish is also visiting different reefs, catching nice flounder like the 5-pounder Jerry Rau recently grabbed. Their patrons are also catching triggerfish and kingfish, which are late-summer regulars.

Bayhound Charters Light Tackle Sportfishing has been busy with trips that have been returning with plenty of flounder, some triggerfish, as well as excellent mahi-mahi.

Avalon Hodge Podge weighed in a couple of drumfish recently after the Sept. 7 blitz at the T.I. Reef. The first went to Bob Bolger, who weighed a 40-inch, 40-pounder, then Capt. Herb and an angler named Larry arrived to weigh their 41.4-pound, 41-inch catch. Also stopping by was Charlie, who landed a 21-inch, 3.72-pound flounder caught while he was fishing the Avalon Shoal.

The Sailor’s Delight is staying busy catching lots of flounder. There are some keepers mixed in amongst the catch, which is a nice bonus. The Sailor’s Delight will sail for flounder through the end of the season then turn their attention to bluefish, so trips can be booked by calling 609-827-8309.

Grassy Sound Marina was a great place to be during Labor Day weekend. People crabbed and fished from the pier while others caught fish from their boats. The highlight came from the McGeever family, who were fishing behind Stone Harbor when 10-year-old Joey landed his first keeper, a 23-inch, 4.5-pound flounder- congratulations, Joey.

Capt. Chuck, from the Sea Star III, reported their week included plenty of fluke, sea bass, croakers and triggerfish. They lost a couple of days to inclement weather but were able to still have a productive week due.

Flounder will be the main draw during the next four days until their 2021 season ends Sept. 19, but Chuck has started to look forward to the opening of sea bass season Oct. 8, which is 19 days away. In the meantime, he will focus on a mixed bag of the species previously listed, minus the flounder.

Jim’s Bait and Tackle reported that Brian Brown stopped in to weigh a cobia he caught off of Cape May on a live bunker. The fish weighed 74 pounds.

Cape May Bait and Tackle reported the beaches are a great spot to fish. Kingfish, croakers and flounder are biting clam, bloodworms or squid offerings. Most flounder are small, but a regular of the shop stopped in one recent morning with a 24-inch keeper.

Use rigs with small hooks to catch them. Evenings at the beach, and into the dark, sees some stripers starting to arrive. Those fishing the reefs are “doing well” by catching flounder and triggerfish.

Beyond the reefs, mahi-mahi can be caught around pot markers and other floating debris. Some cobia may also be caught. Tilefish are also being caught for those wanting to continue farther out.

Crabbing in the back bays and creeks is good, with plenty of large crabs being caught.

If you want to get in a little more flounder fishing, it is now, within the next four days at least, or never. Their season ends this Sept. 19, but we have plenty of other species around. Then, it’s on to sea bass season, but let’s not jump ahead.

Good luck if you get out and I’ll see you around.