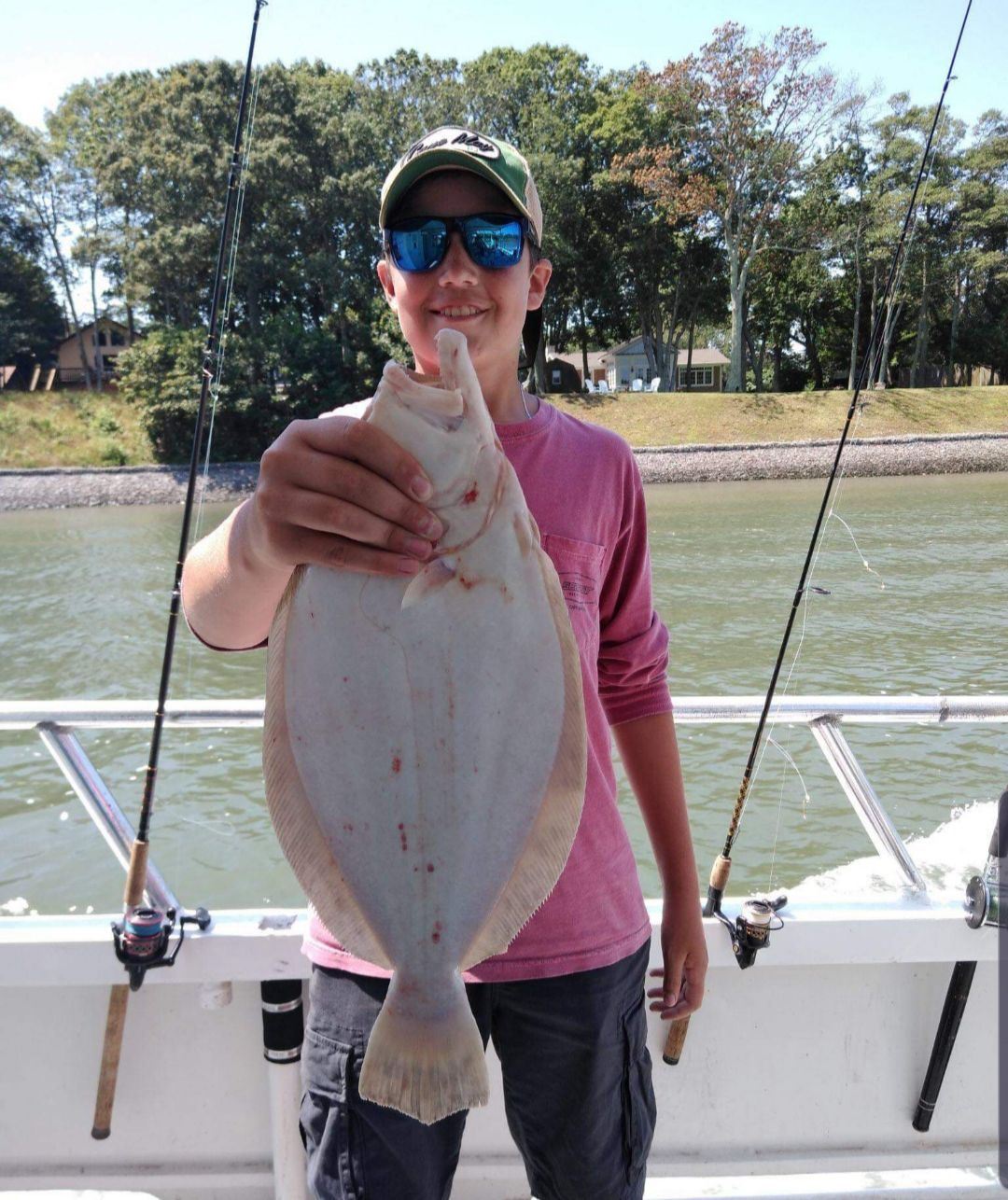 Justin and his nice fluke. 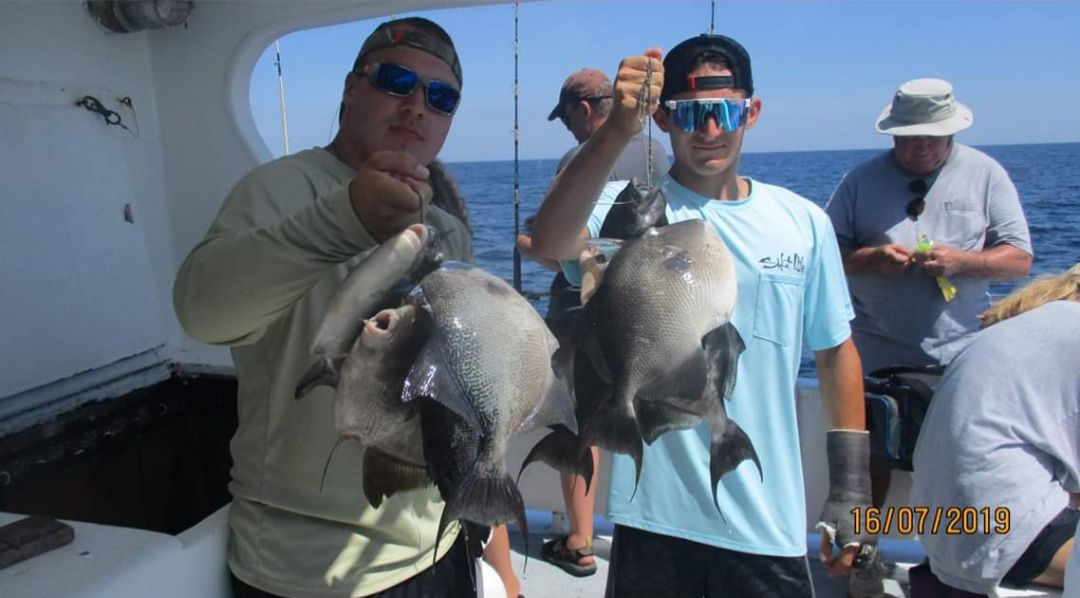 2 happy anglers and their triggerfish. 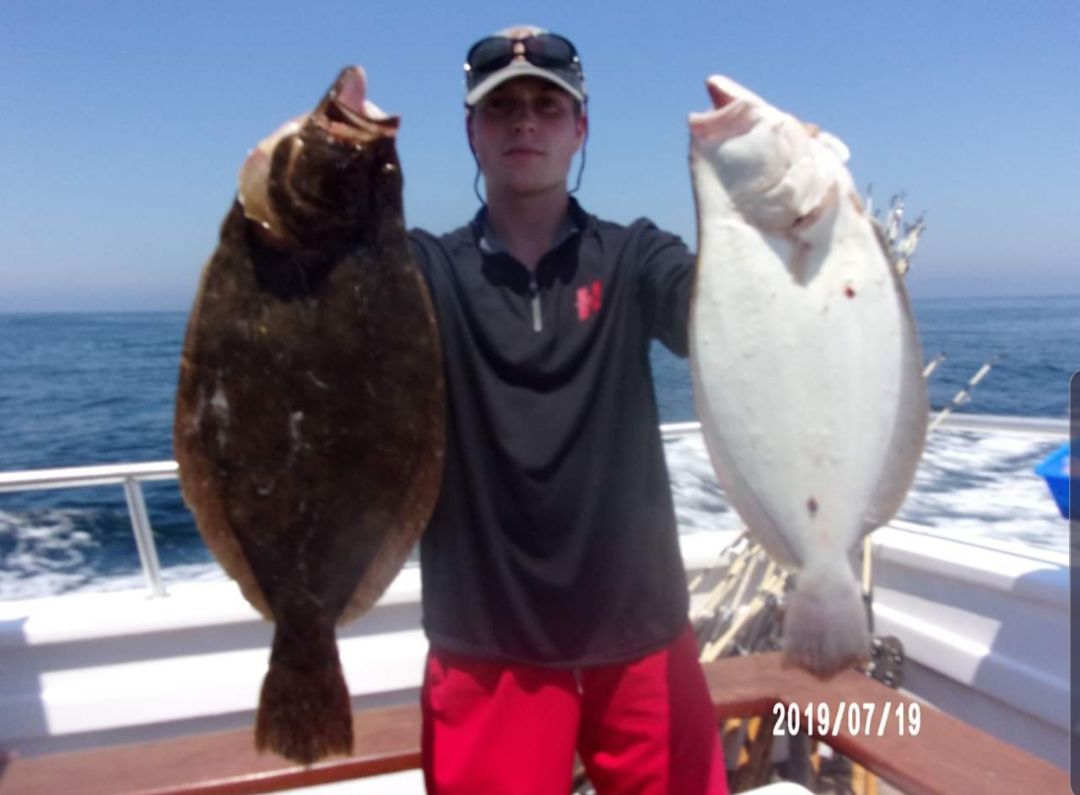 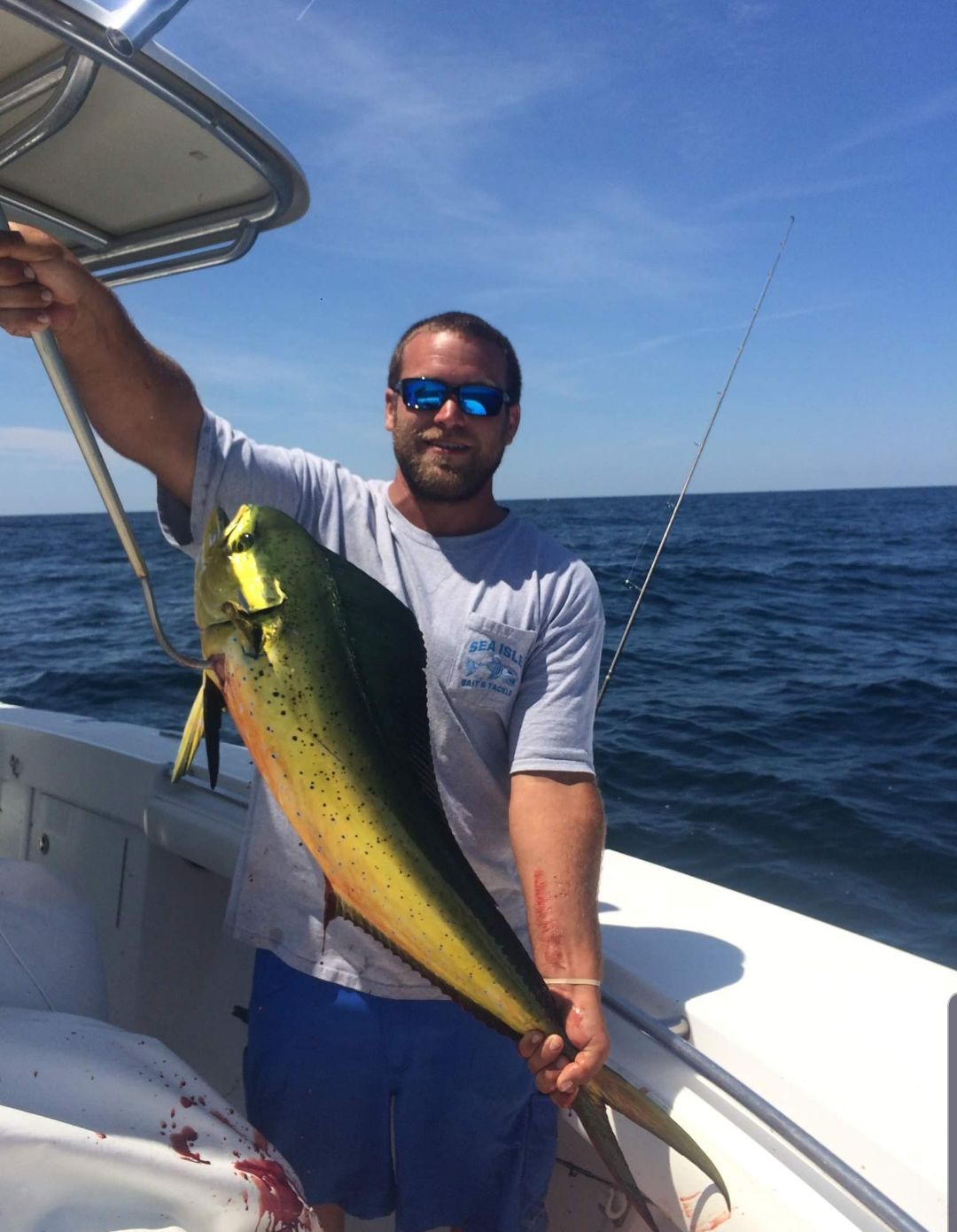 A young angler checks out a seabass.

Justin and his nice fluke.

2 happy anglers and their triggerfish.

A young angler checks out a seabass.

Wow! It’s another hot and very steamy week, and weekend, but that didn’t deter those who desire to fish. The fishing also “heated” up as described in one report. We’ll pass on what transpired, plus we have news of two upcoming fishing tournaments for the kid’s, so get their gear ready. Let’s get started.

Captain Mike of the Miss Chris reports he has predominately been fishing in the Cape May Channel. While there, his fares have been catching keeper fluke, bluefish, kingfish, as well as weakfish. That makes up a nice mixed bag for those sailing one of the two daily 4-hour trips that Mike runs. They leave at 8 a.m. and 1 p.m.

The Sea Star III, and Captain Chuck, reported that “fluke action, along with the weather, really heated up this week.” He emphasized the “really” as the action was a lot better as keepers and shorts both increased. Some big fluke, plus a number of limits were achieved. He hopes this is “a sign of thing to come as we hit the midway point of summer.” That statement itself is kind of hard to believe as it seems we were just waiting for opening day of flounder season.

The pool winners were all fluke and their weights follow. Jerry Boyle had a 4.60-pounder while Harry Theurer got a hat-trick with his fish weighing 3.70, 4.25, and 5.25 pounds. E.J. Wargo weighed in a 4.5 fish and Bob Hackett closed out the list of winners with a 4-pounder.

The Porgy IV recorded some consistently solid catches. Mike Goida was a pool-winner recently with his 22-incher, which was the largest of his limit that day. John Callahan was the runner-up that day with a 21-inch fish while his brother Bud had two keepers. Paul Kreschollek and his 5.5-pounder won on another day, while John Panvini recorded a limit on the same day. Sunday proved good for Bob Brett won collected due to his 6.75-pound fluke which beat out the 5.75-pound fish caught by Kevin Weindel. A split-pool went to Mike Wolf and Sam Citron with 22-inch fish. Brian Pichalsky had a limit that day.

The Cape May Lady, running two trips daily at 8 a.m. and 1 p.m., has been catching “plenty” of bluefish, triggerfish as well as keeper weakfish. Head on down and grab a spot at the rail.

The Cape Queen, with Captain’s Mike and Andy, has been running inshore trolling trips. They have been catching “boat limits” of bluefish, Bonita, Spanish mackerel, King Mackerel, and Mahi-Mahi. They have also been running trips to the Delaware Bay for shark fishing trips. Give them a call at 609-884-0001 to set up the trip of your choice.

The Hooked Up II had a nice trip as they caught some nice keeper yellowfin tuna, plus a lot of smaller ones that were released. The highlight of the day though was the catch and release of an estimated 450-plus pound Blue Marlin. They also reported plenty of skipjacks around. They will be offering trips that will feature trolling for yellowfin, working the “pots” for Mahi, and deep-dropping for tilefish.

The word from Boulevard Bait and Tackle is that the kingfish bite in the surf is still “strong.” Jimmy checked in with report and picture of his early morning success. Flounder fishing at the local reefs is also doing well. The bay is also still producing nice fish as “Twiggsy” weighed in 6.6 and 4.4-pound flounder plus a third keeper that was just a little smaller.

Boulevard Bait and Tackle is proud to sponsor a youth tournament that is mentioned further on in the column, so keep reading.

The Miss Avalon is enjoying the warm weather by catching triggerfish, flounder, kingfish and sea bass. They are also saying that you can catch some “cool ocean breezes” which are always welcome. Hop on board and catch some dinner.

First Fish Adventures headed out to the Cigar but faced a challenging tuna bite. However, they didn’t finish empty-handed as they landed two King Mackerel, four Mahi-Mahi, and six Bonita. They were able to turn their tuna frown around. While fishing closer to home, young angler Nate Ross caught a nice flounder. Not to be outdone Ryan Zahajkewycz and his grandmom, Nancy, both caught their first keeper flounder ever.

Avalon Hodge Podge weighed in a 3.87-pound, 21.75-inch fluke for Tanner Williams that he caught in the backwaters on a live minnow. They are also reporting that kingfish are showing up in the Avalon surf, so grab a pole, some small rigs, and head out.

Captain Al, from Bayhound Charters Light Tackle Sportfishing, had success on his recent trips as one charter had fun with King Mackerel, Spanish Mackerel, Bonita and bluefish. Another trip produced a nice cobia as well as a tasty mahi-mahi. That’s some nice variety.

Cathy at Sterling Harbor reports “good” fluke fishing that should “only improve” as the water continues to warm up. Scott Wheeler and crew recently caught 11 keeper fluke to 6-pounds during a trip to the Old Grounds. Some nice sea bass can also be caught by those who do their fishing at “the artificial reefs”.

The Five Fathom Bank and “any of the inshore shoals” are providing bluefish, Bonita, Spanish mackerel, and an “occasional” King Mackerel. Troll some Clark Spoons and small feathers for the best opportunity.

The offshore canyons are where “anglers are still catching Yellowfin and Bluefin tuna.” More Mahi-Mahi and White and Blue Marlin are also “showing up.”

Surf anglers “are doing well catching” kingfish on small hooks tipped with Fishbites “or small pieces of mackerel” while the inlets have snapper bluefish and a few Spanish mackerel. The sod banks and docks have schoolie-size stripers that are hitting clam baits or top-water lures.

Crabbing, which was “very good” if you “braved the heat”, earned a score of 4 Claws, out of 5, from Crabby Jack.

The Sailor’s Delight is delighting their patrons with steady action of keeper, and short, flounder, sea bass, kingfish, keeper weakfish, and bluefish. Some of the keeper flounder were up to 22-inches. They have been “seeing a lot of bluefish in the back” and are looking forward to a good “fall bluefish season.”

Grassy Sound Marina reports congratulations are due to 7-year old Rosie Westrope. Rosie was fishing with her dad recently when after her first cast, she caught her first saltwater fish, a flounder while fishing from the pier. Congratulations Rosie from The Fishing Line.

Two young angler tournaments: Boulevard Bait and Tackle is a proud sponsor of The Strathmere Fishing and Environmental Clubs 16th Annual Kid’s Fishing Tournament on Saturday, August 3 at Prescott Street Beach.  Admission is free, there are awards for the kids, and there will be a one-dollar raffle for all. Registration starts at 7:30 a.m. with fishing commencing at 9 a.m. and concluding at 11 a.m. Children aged 17 and under are eligible to participate. You must provide your own rod, reel and equipment and are asked to use pyramid weights. Please do not use round or drop weights. Registered children will receive free bait, a T-shirt, and hot dogs and drinks while supplies last. Adults must accompany children under 12 years old. And please, no bare feet.

Another tournament for young anglers is the Ocean City Fishing Clubs 44th Annual Boys and Girls Surf Fishing Tournament scheduled for Saturday, August 10. Registration is free and will begin at 9 a.m. at the north end beach near the Ocean City-Longport Bridge. Parents or guardians will be asked to sign a waiver for insurance purposes. Each child must provide their own gear and bait. Fishing starts at 10 a.m. and ends at noon and an awards presentation will follow. The event will be held rain or shine.

Featured is a boys and girls division with age groupings of 8-10, 11-12, and 13-16. Parents may cast the line for the 8-10 age group, but the child must take over after the line is in the water. Three anglers who catch the most fish in each age category will win a rod and reel. The boy and girl land the biggest fish overall will receive bicycles and trophies.

Special offer: The Canyon Club Resort Marina is offering complimentary dockage for anyone who plans to enter both of two big approaching events. The White Marlin Open is being held from August 5-9 and the MidAtlantic is scheduled for August 18-23. If you plan on participating in both tournaments and want to reserve a slip for both events, you will receive complimentary dockage for the week in between. You can save up to 33% on your transient dockage bill. Additionally, you can enter and register for the White Marlin Open and pay all last-minute Calcutta entries in Cape May and avoid the rush in Ocean City, Maryland, the other participating port. To reserve a slip, and for more information, call Dockmaster/Ship Store Manager Paul Hoffman at 609-884-0188.

Get out, get fishing, and have fun.