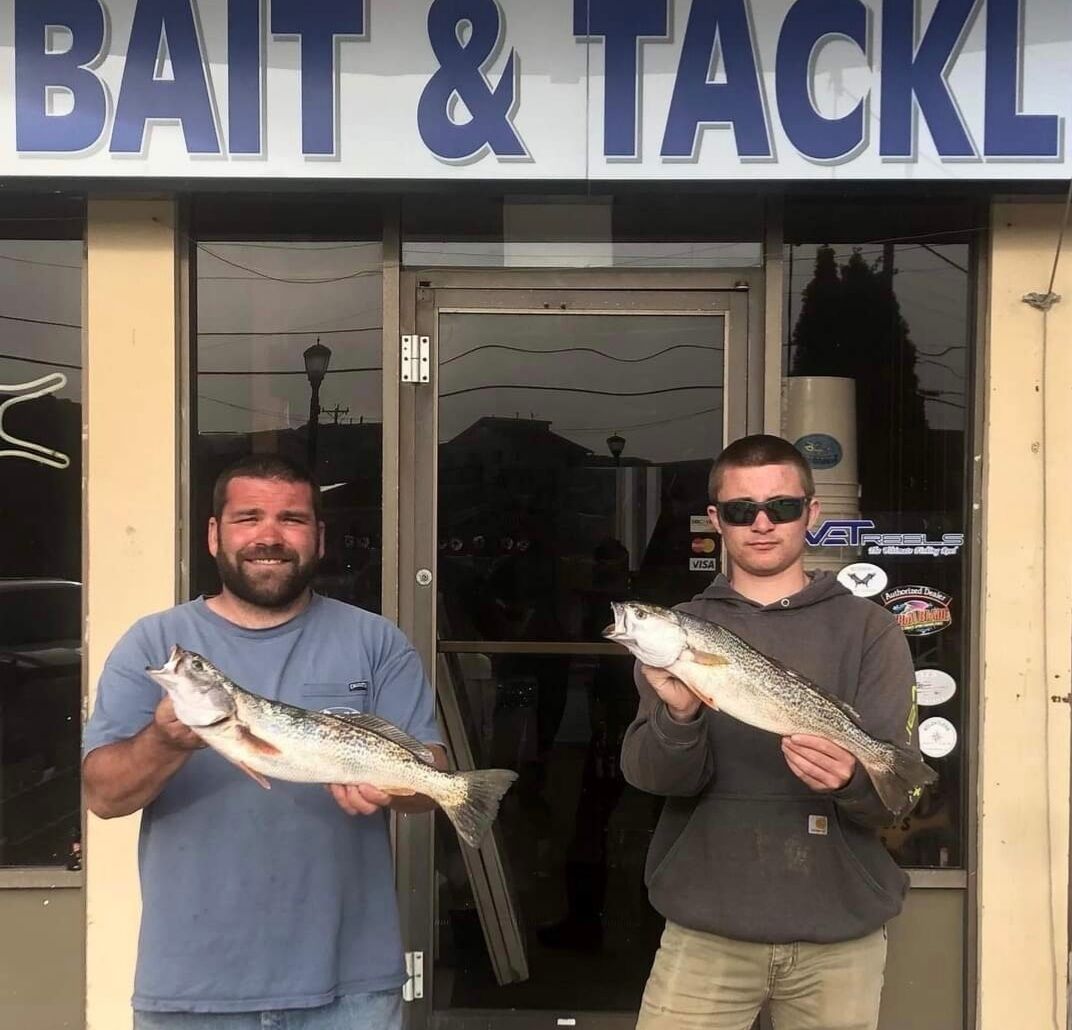 Jimmy, left, and Dom, right, with their weakfish. 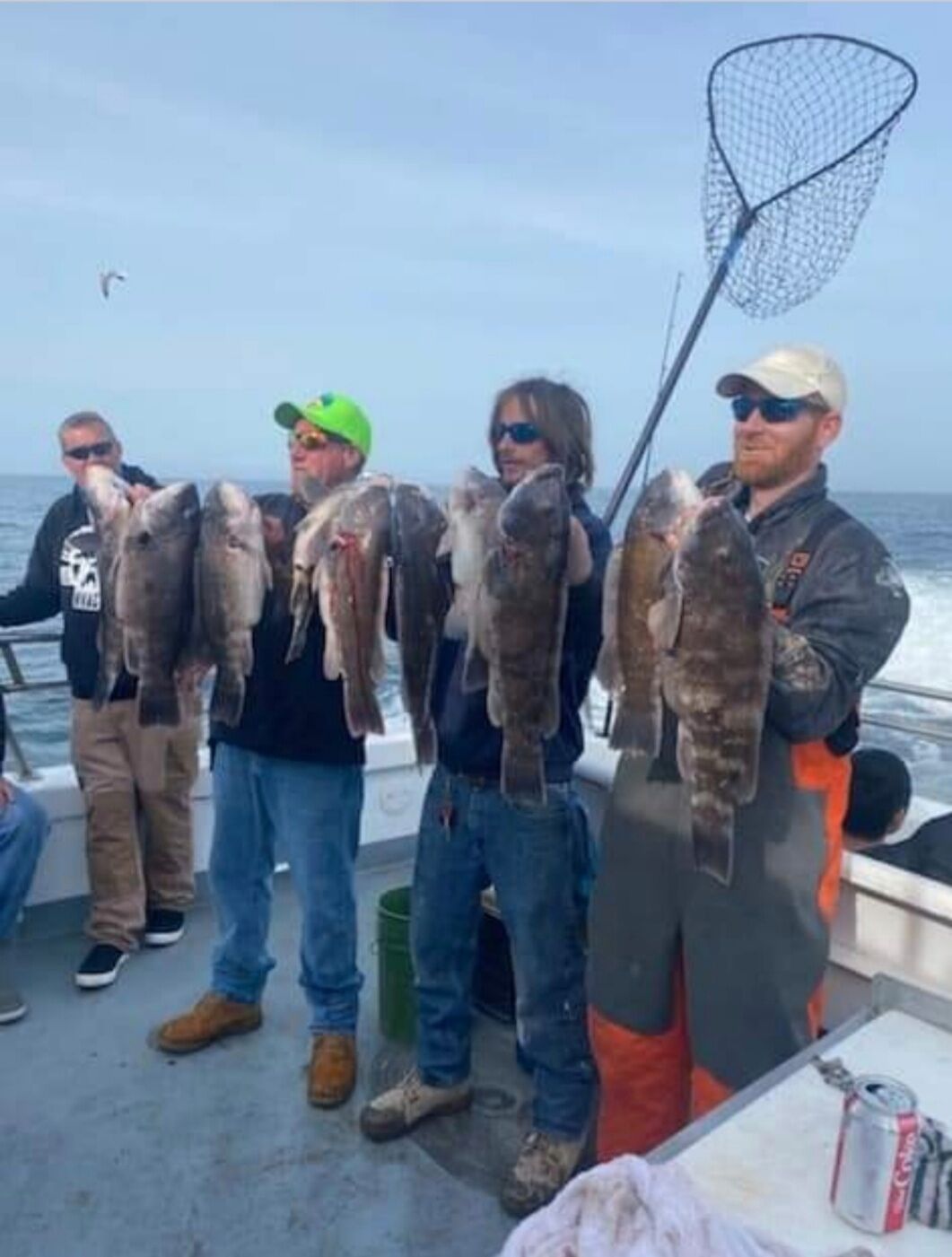 Four anglers and their blackfish. 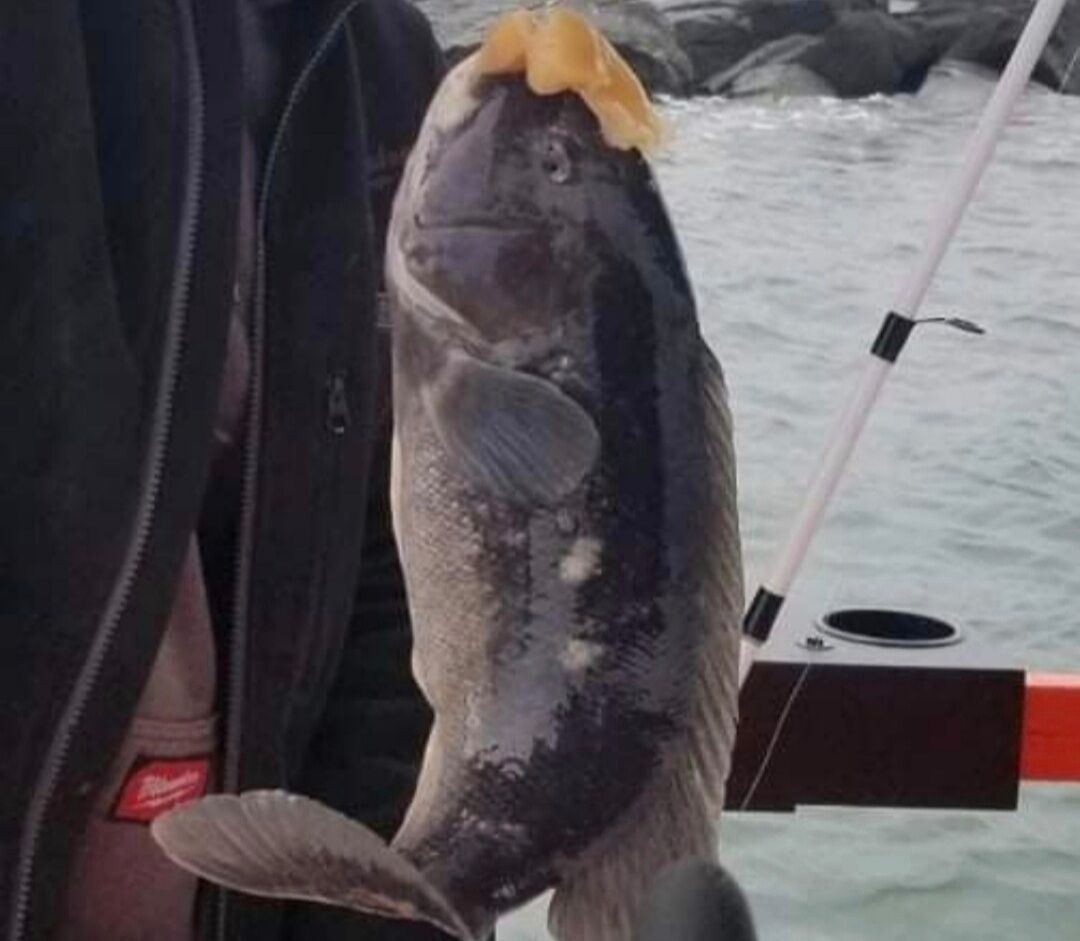 An up-close view of a nice blackfish.

Stripers are starting to appear in the backwaters more, a puppy-drum catch was reported, some weakfish were caught, and the blackfish bite is growing as the month-long season advances.

Despite the weather hindering weekend fishing, trips were made and bore catches.

The Porgy IV got their weekend of trips started April 9. That trip saw a few anglers limit out, including Kevin Olbrich and Fred Jennings. Some drops produced better numbers of keepers, while others had scattered results.

The next day's results saw keepers for some, while others had a slow pick. Patience and skill prevailed that day. Rob McHugh won the daily pool and made a sad note in history, as he won the final pool on the Porgy IV.

Unfortunately, I received news April 12 that the Porgy IV is closing. Capt. Paul accepted an offer to sell the vessel, and it will be moving to New York. Paul states that he will miss his “loyal customers,” that he’s “been blessed to meet so many great people," and thanks everyone. Myself, my son, and many others will miss fishing with you, Paul. Good luck with the next chapter of your life.

The Miss Avalon recorded a great day April 10. The morning bite was described as being “on fire." The bite cooled through the midday hours but returned as the trip reached its end.

For the day, 25 keepers were apprehended. A lady-angler, Renee, was the pool winner with a blackfish at 4.34 pounds.

Call 609-967-7455 to see when the Miss Avalon is running. Trips vary early in the year for the boats due to weather, private charters, and people heading back to work early in the week.

The Cape May Lady also held a weekend trip of successful fishing with limits. An excellent 11.2-pound blackfish was caught. They will be running more trips, so keep tabs on their website, Facebook page, or call 609-780-7900.

The Fishin’ Fever is on a streak by catching their share of nice keepers and limits. The best fish was a 9.5-pounder caught by Dennis Muhlenforth that was released after being weighed and photographed.

The Sailor’s Delight is exploring rock piles for blackfish and has hauled in plenty of keepers. Give Capts. Andrew or Dave a call, at 609-827-8309, to see when they sail and grab a seat at the rail.

Stalker Fishing Charters, with Capt. Skip, is fishing from “the Skiff” in the backwaters, where he is targeting striped bass. Fishing was described as “great,” as fish up to 33 inches were grabbed.

Bayhound Charters Light Tackle Sportfishing's Capt. Al is ready and prepared for another season. Call him, at 609-602-2662, to get the dates you desire so you can target the fish you want to pursue.

Grassy Sound Marina kicked off its 19th season. The pier is now open and ready for anglers, so stop in, say hello, and prepare to get their line wet.

Don't forget that the 2021 Grassy Sound Flounder Tournament is June 26, and more information should be forthcoming.

Boulevard Bait and Tackle reported the best land-based fishing in the area should befall over the next six weeks. The report says stripers are migrating through our area, with some larger fish mixed in.

The report also mentioned that puppy-drum have started appearing in the surf. It concluded by stating that we are waiting to see if bluefish will be spotted. Few showed up last year, so only time will tell if we will see better numbers this season.

Sea Isle Bait and Tackle reported that anglers Dom and Jimmy stopped in, each with a nice weakfish, the first reported ones of the year. It’s nice to see they are cruising the waters.

Also announced was that Sea Isle Bait and Tackle is having a free, season-long fishing tournament. Stop in with a catch during normal business hours, have it weighed, and you are entered to win. The winner in each category of fish, of which there are 10, wins a $100 gift card, while second place will land you a $40 gift card.

Striped bass are not included in the contest due to size restrictions. Also, all New Jersey and federal fish regulations are to be followed. The eligible fish for the contest are flounder, weakfish, bluefish, sea bass, tog, kingfish, triggerfish, sheepshead, mahi-mahi and cobia.

The Villas Fishing Club Drum Fishing Tournament, scheduled for May 7-8, is approaching. It's both a boat and land-based tournament. The sign-up sheet is at the club, or Keith Wagner can be called, at 609-707-6970.

Take care, good luck if you get out, and I’ll see you around.