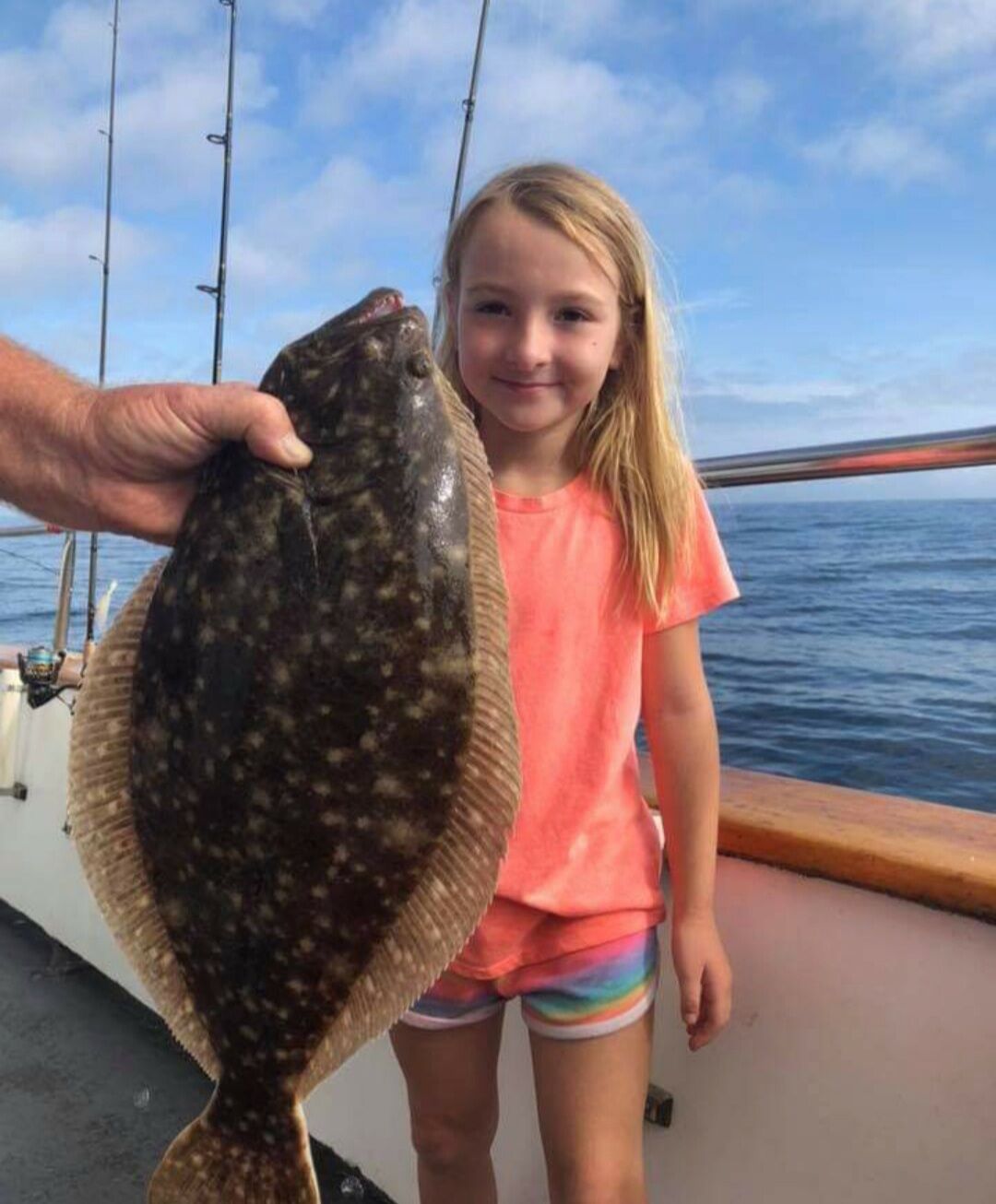 Madison Schuman and her 21.5-inch flounder. 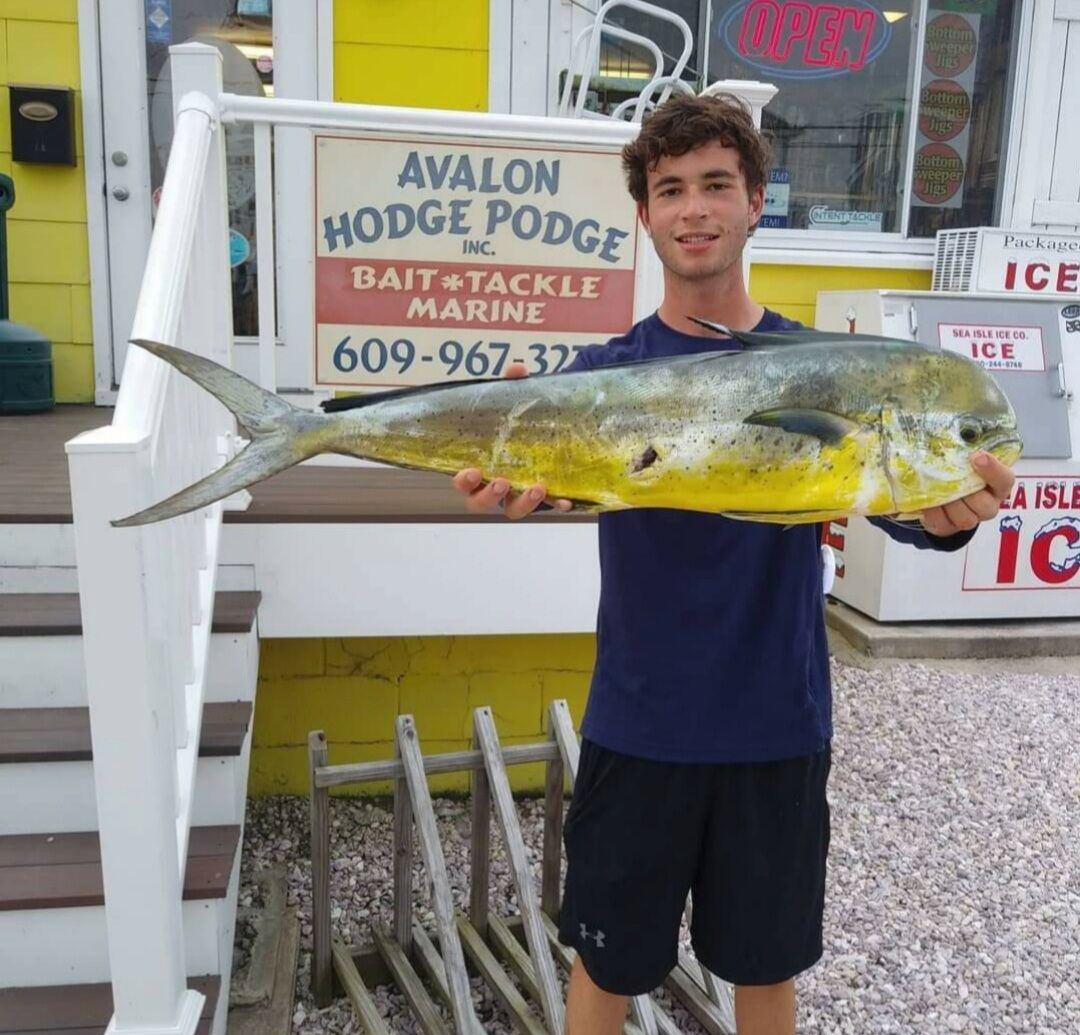 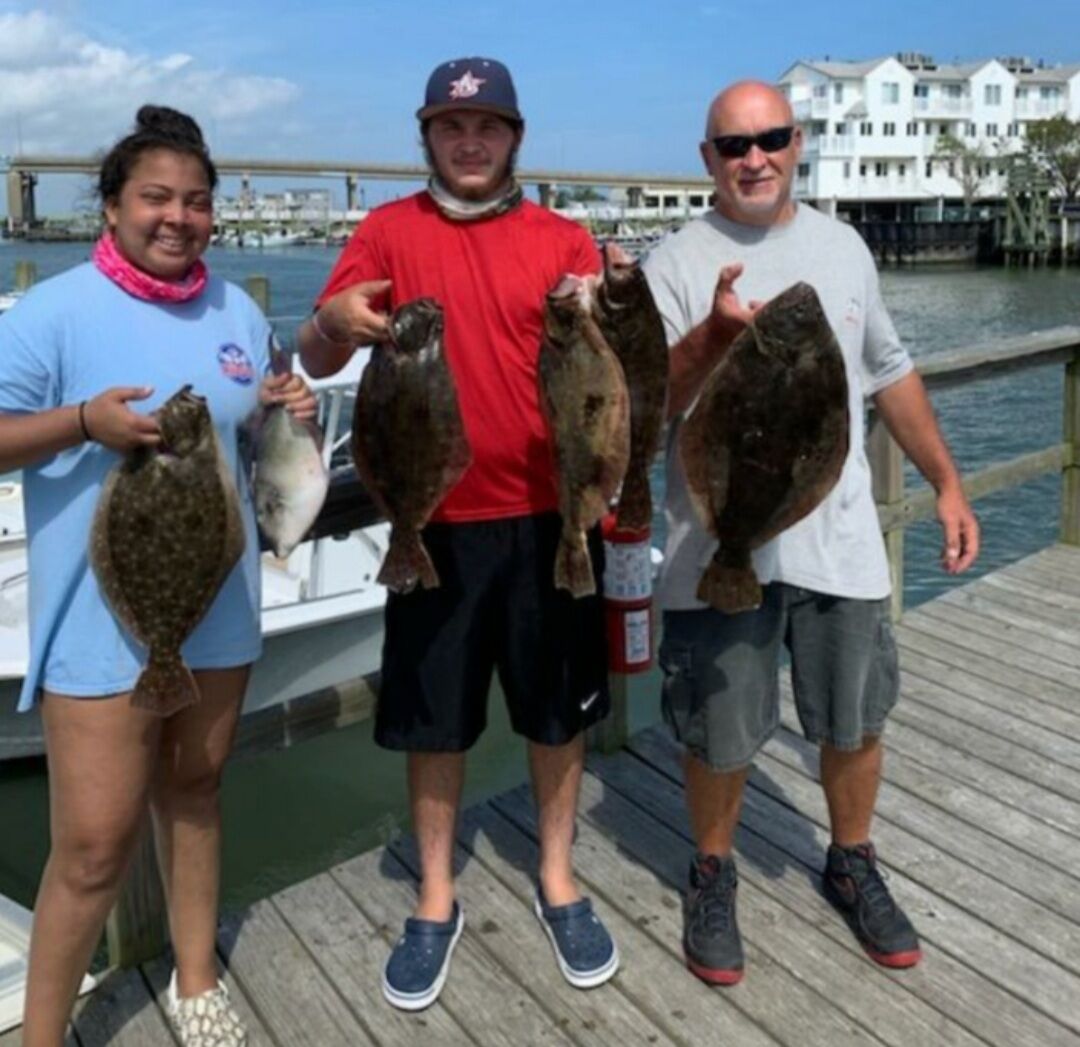 Happy anglers and their catch. 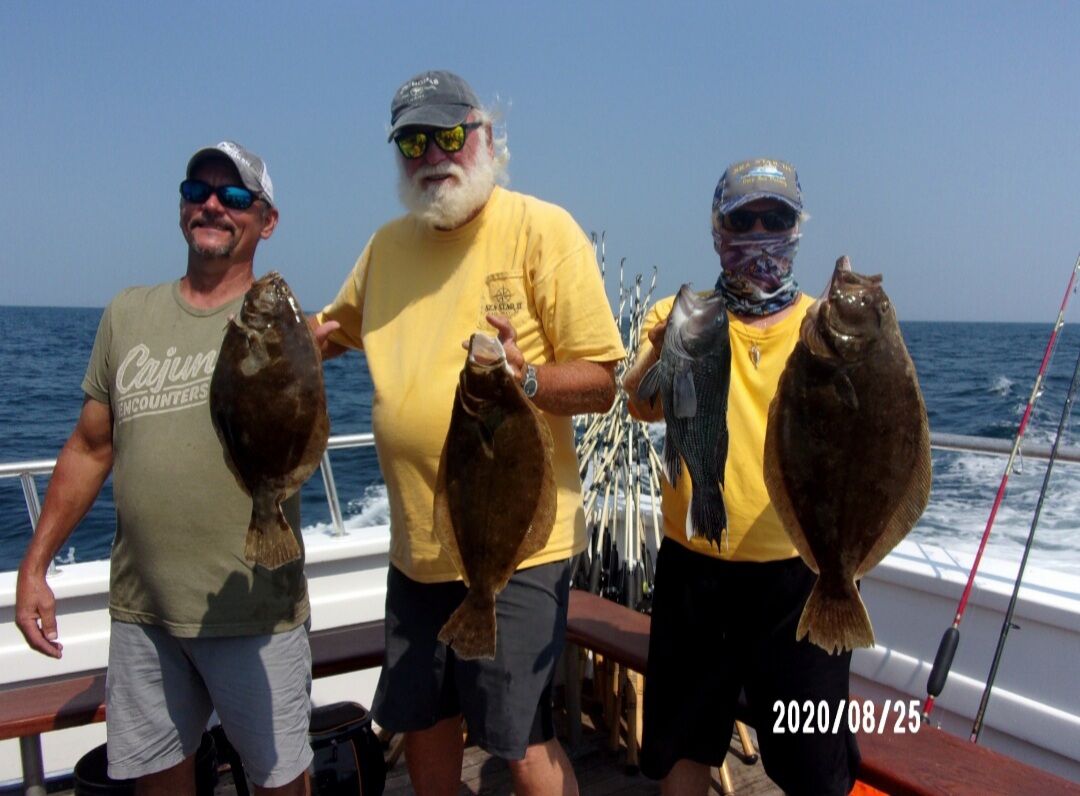 Happy anglers with their flounder and sea bass. 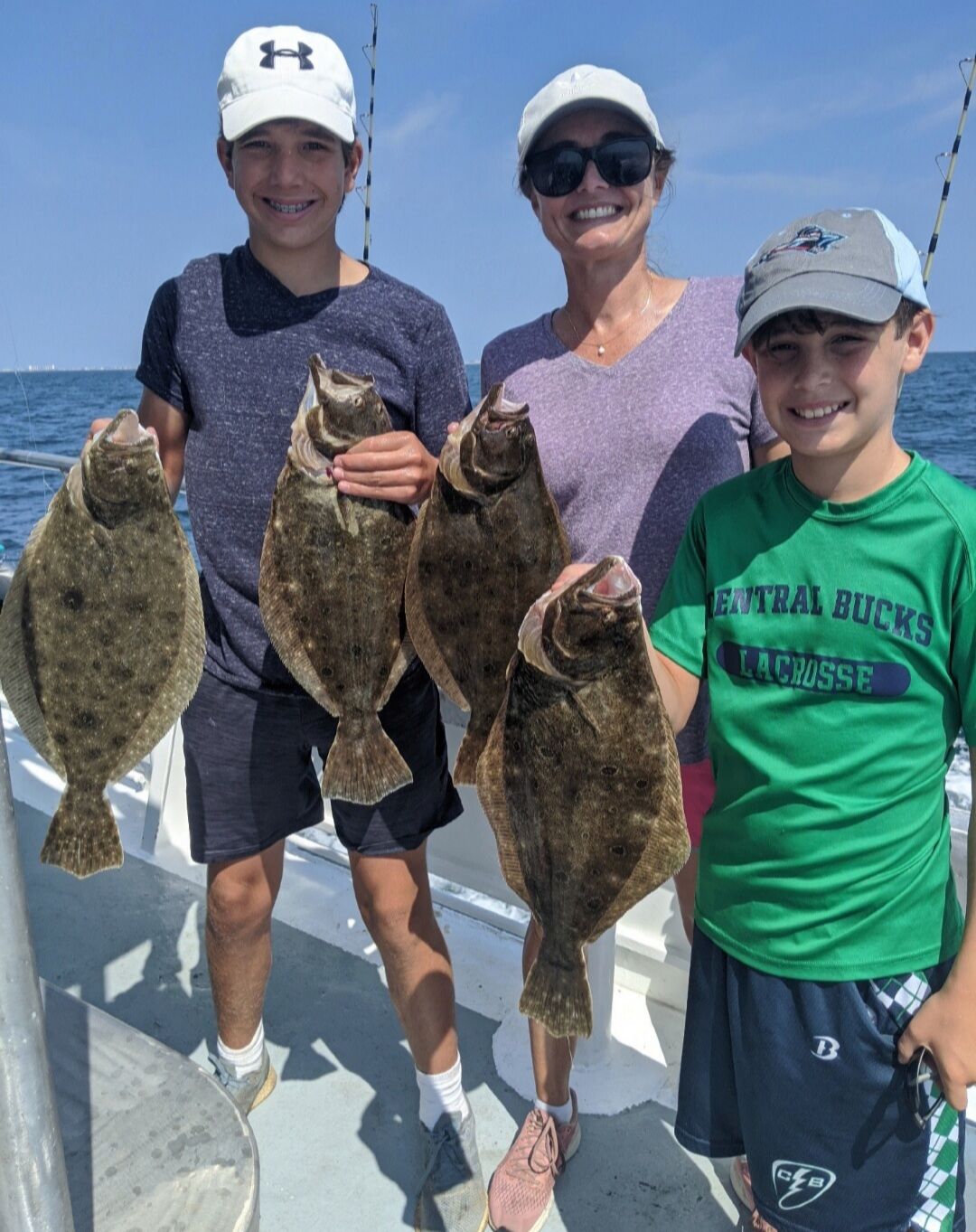 Though the calendar has flipped to another month, and the summer and flounder seasons are sliding away, fishing continues to be productive. Flounder, triggerfish, sea bass, mahi-mahi and mackerel continue to congregate in local anglers' coolers. Let’s check out what occurred since our last visit.

Grassy Sound Marina reported a combo of a nice keeper flounder and some blue claw crabs for the husband-wife team of the Longos. They caught their dinner while spending some quality time on the pier.

The Sailor’s Delight is plying the back bays to catch nice fish. Keeper flounder, plus some shorts, and kingfish have been keeping them busy. They also reported their best crabbing trip of the season, which resulted in three dozen keepers.

Bayhound Charters Light Tackle Sportfishing continues to catch nice fish, as one of their crew members proved. Jimmy, Capt. Al's son, recently landed a nice 6.2-pound flounder from a local reef. Subsequent trips during the week produced 30 keepers, with nine fish ranging from 4.4 to 7.9 pounds. On one of the trips, anglers Noelle, Zachary, who had his limit, and Mark contributed five keepers to that total.

The Miss Avalon is busy as their patrons have been catching some big triggerfish, keeper sea bass, and nice flounder. They have been visiting the local reefs and have not been disappointed.

The Avalon Lady is still fishing the backwaters, plus the inlet as conditions allow. They are still catching flounder, plus some small sea bass and sharks that are exciting their patrons.

The Starfish is busy as they are catching flounder, sea bass and triggerfish. They're night fishing, too, which is a great opportunity to see the area we fish from a different perspective.

Avalon Hodge Podge reported that a young angler, Ben, and his dad had a great mahi outing while fishing near the 28-mile wreck. One fish was 29 inches and weighed 9.25 pounds. They caught other mahi on that trip, too, so their table and freezer had plenty of meat.

Boulevard Bait and Tackle had an abundance of action to report, as Frank, Brian and Mason caught flounder limits at the reef Aug. 30. That trip was also productive for Joey G., who caught his limit.

Sept. 1 had some “sick fishing” for the Fin-Advisor's crew, who caught a four-man limit, including three that went 6.8, 6.6, and 5.5 pounds. Other nice catches went to Evan and Lacey, who stopped in with a 15-inch kingfish. They also caught some small kingfish, spot, and pompano on bloodworms at a local beach. Finally, the three-man crew of Ricky, Bobby and John caught “plenty of dinner” consisting of bluefish, flounder and “a nice” weakfish.

Sea Isle Bait and Tackle reported an excellent catch for Capt. Joe Hughes. He was out on the reefs and landed an 8-pound, 10-ounce flounder. Nice catch, Joe.

The Cape Queen took the Lewandowski party out for a mahi-mahi trip. They had a great day and returned with plenty of tasty mahi. Fishing trips and sunset cruises are available for booking.

The Miss Chris' crew, led by Capt. Mike, focused their efforts along the beachfront recently. They were looking for fluke, found them, and their anglers landed them.

Amy Greenspan and family set the standard by catching four keepers. They also had some throwbacks that contributed to their busy day. Jay James added to the total by catching a 20-inch flounder. Other anglers also caught flounder during the busy week.

The Sea Star III reported more flounder and sea bass this week. The anglers were happy when some triggerfish arose and added to the mix. Some days were more difficult due to slow drifting conditions, but that didn’t prevent nice fish from being caught.

The Porgy IV also faced those tough drifting conditions due to a wind-versus-tide scenario. That was only a small deterrent, as nice fish were caught regardless. A highlight was 9-year-old Madison Schuman's 21.5-inch fluke. Most pool-winning fish were in the 21-to 23-inch range and claimed by Clarence Snare, Everett Fleming and Craig Constantino, who also limited.

The biggest pool winner, though, went to Joe Landis, who caught a 5.5-pound fluke. If there was a poor-timing award, it would go to John Riccardi, who limited out and caught a 4-pounder on the same day that Joe landed his fish. Most other days, John would have been counting his winnings.

Full Ahead Sport Fishing has been busy lately. They have been catching flounder, sea bass and mahi, which has created a nice mix of fish in the cooler. One group of five went out on a day when conditions weren’t what you would order, but the day ended with 12 keeper fluke. Lady angler Kristy lead her dad and his friends with her nice catches.

The Fishin’ Fever reported great fishing on their flounder charters. One day included a boat limit, with the top flounder reaching 7 pounds.

Cape May Bait and Tackle sent word that kingfish, croakers and spot are being pulled from the surf while using bloodworms, clams and squid. With the mullet run starting, some anglers reported that they caught bluefish and stripers, also from the beach.

Kingfish and weakfish are around Cape May Point and “at the edges of the 60-foot slough,” while the Cape May and Wildwood reefs are producing keeper flounder and sea bass, which are now out of season until Oct. 8.

The inshore lumps have bluefish, Spanish and king mackerel while the offshore tuna bite has slowed. Mahi-mahi are being caught around the pots.

The crab report says that plenty of big blue claw crabs are around, which has led to “excellent” crabbing for those who are dropping their traps.

Sadly, flounder season ends Sept. 19, so try to get out and catch some of these tasty fish, as well as some of the other fish swimming around our waters.