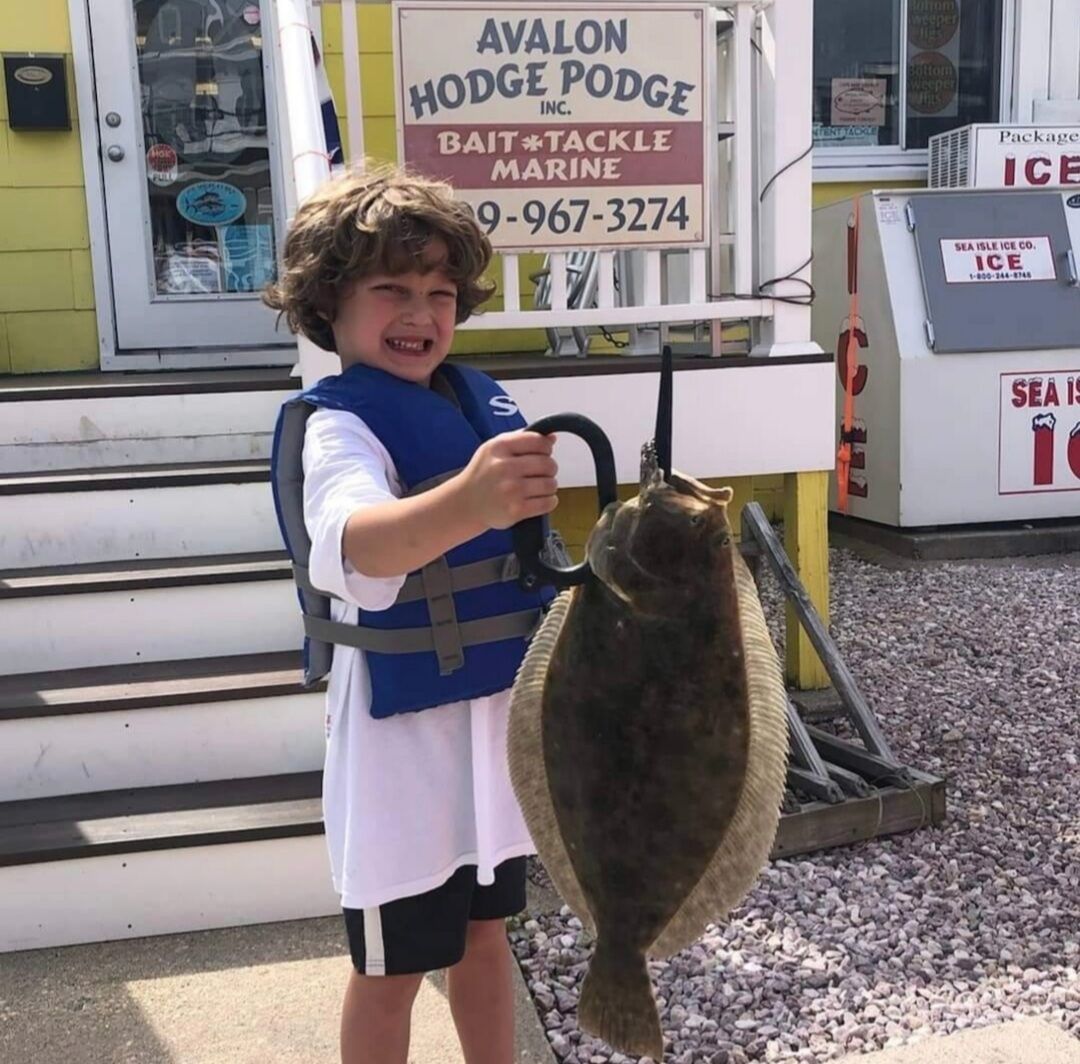 Logan and his flounder. 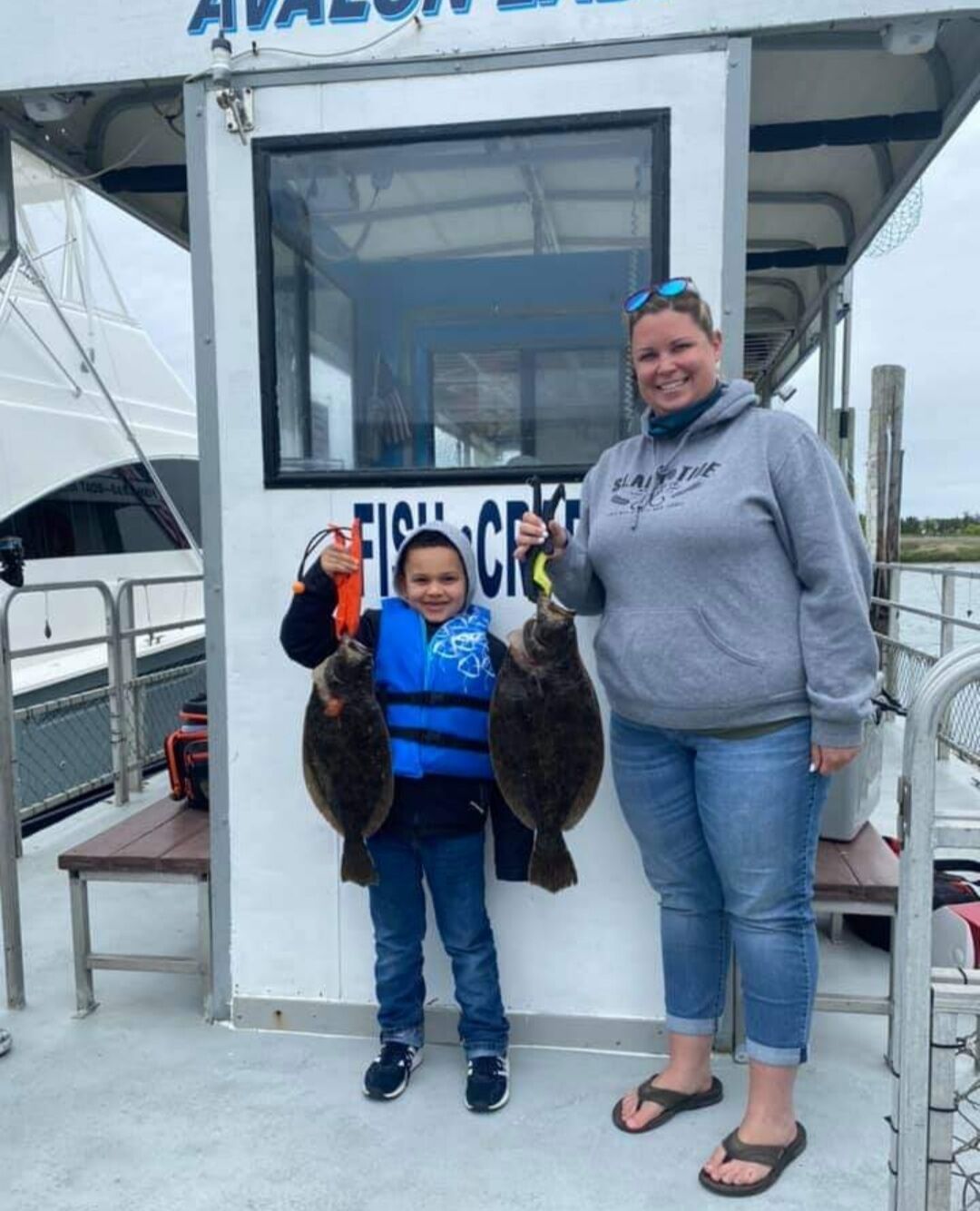 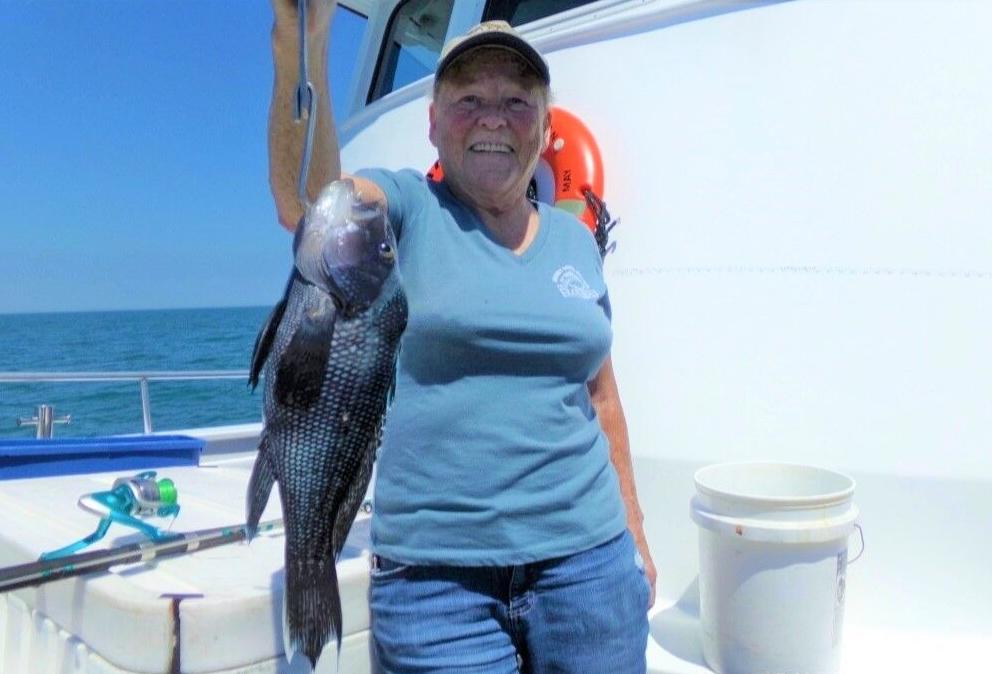 Joan Thornton and her sea bass.

What a change a week makes; one week it’s summerlike, with warm, sunny weather that helped usher in flounder season's opening week.

Boats were everywhere from the back bays looking for flounder, in the Delaware Bay catching drumfish, and on the ocean searching for sea bass. Fast-forward one week, and you would have thought that early April returned.

The wind ripped, rain fell, and temperatures were reminiscent of an early season blackfish trip. The biggest question on everyone’s mind was how long would it take for the fish to start biting once anglers returned to the water? They didn’t have to wait long to find out because the fish proved to be hungry and eager to feed.

Capt. Chuck reported a “fine” start to the beginning of his week, with a nice return on his sea bass trips that included the “occasional” flounder being caught. His “Prime Time Drumfish Trips” also did well before the weather delivered a “cruel blow” during the holiday weekend.

Most trips were canceled, but one drumfish trip happened and provided only skates and dogfish. The drumfish just weren’t hungry.

The Miss Chris reported they were doing well with sea bass on their four-hour trips, plus a few flukes were caught. Don’t forget that they are also running excursions for drumfish.

The Miss Chris and the Sea Star III are located at the Miss Chris Marina, in Cape May, and offer fishing trips at different lengths. Check out their schedules for available trips.

The Miss Avalon is sailing for sea bass and flounder. Their May 27 trip, before the wild weekend, produced some nice catches of both species. After the storm, the boat took a ride offshore June 1 to different wrecks looking for sea bass. They found them, and they had a “beautiful” day of “drop and reel” fishing. The anglers departed when the trip ended with plenty of sea bass.

The Avalon Lady had great trips May 27 and 28. May 27 was a “beautiful” time to be on the water, while May 28 was cold and windy, but at least dry. The May 27 trip had a slow bite on the incoming tide, but the action developed when the tide changed. Eight keepers were caught during the trip.

May 28's challenging conditions, which the anglers fought through, generated only four keepers. Both boats are part of the Miss Avalon Fishing Fleet and can be reached at 609-967-7455. Call ahead to check out their schedules.

First Fish Adventures, with Capt. Zig, had a great “first flounder trip” of the year. Paul Black, Junior and Joe Roberts each caught two keepers ranging from 20 to 22 inches. Young angler Grayson scored his first flounder while fishing with his dad, Greg, and Nana. Other highlights saw Jack and friends land a keeper flounder after a dolphin-watching trip, and the Palazzo family landed a nice keeper while on a trip celebrating one angler's 13th birthday.

Boulevard Bait and Tackle reported pleasurable striped bass action from the Sea Isle beach before the storm hit. Gary and Andrew both caught nice-sized stripers that were returned to the water to swim for another day. Andrew also mentioned that he “left them biting."

Sea Isle City Bait and Tackle had two noteworthy catches from Morgan, who stopped in with a 27-inch, 7.4-pound flounder, and Dave, who hauled in a 35.25-inch, 17-pound striped bass. Dave was fishing from a dock in the Townsend's Inlet area of town. This fish and others were reportedly feeding heavily before the storm arrived.

Avalon Hodge Podge reported adequate action after the storm passed, with a young angler, Logan, checking in with a 20-inch, 2.75-pound flounder he landed. He was fishing from a local dock and was using a minnow for bait.

Rick stopped in May 31 with two nice keepers he pulled from the back bays' deep waters. He reported Gulp was his bait of choice.

A midweek update from AHP had the Pequot, with Capt. Tim and crew, reporting a successful trip to deep water. They returned with plenty of sea bass, a rose fish, and a big golden tile.

Grassy Sound Marina had a great catch from their pier after the storm left the area, as Deana Anderson caught a 4-pound, 22.5-inch flounder. She was fishing the incoming tide and using minnows as bait.

The Sailor’s Delight reported hungry keepers on their Monday trips. The action continued through the week, with Bruce Mazzarelli landing the largest keeper May 31, a 22-incher. June 1's morning trip recorded fish to 22.75 inches, while the noon trip had multiple keepers at 23 inches. The late afternoon trip, at 4:30 p.m., had 22 and 23-inch keepers caught in the first 20 minutes of the trip, and the trip ended with a few more nice keepers. The nice fishing continued June 2, as more keeper flounder were caught on a day when the wind and tide combined to make for a tougher-than-hoped-for day.

The storm didn’t allow for fishing over most of the holiday weekend. However, when it left our area, the fishing turned back on.

Good luck if you get out, take care, and I’ll see you around.