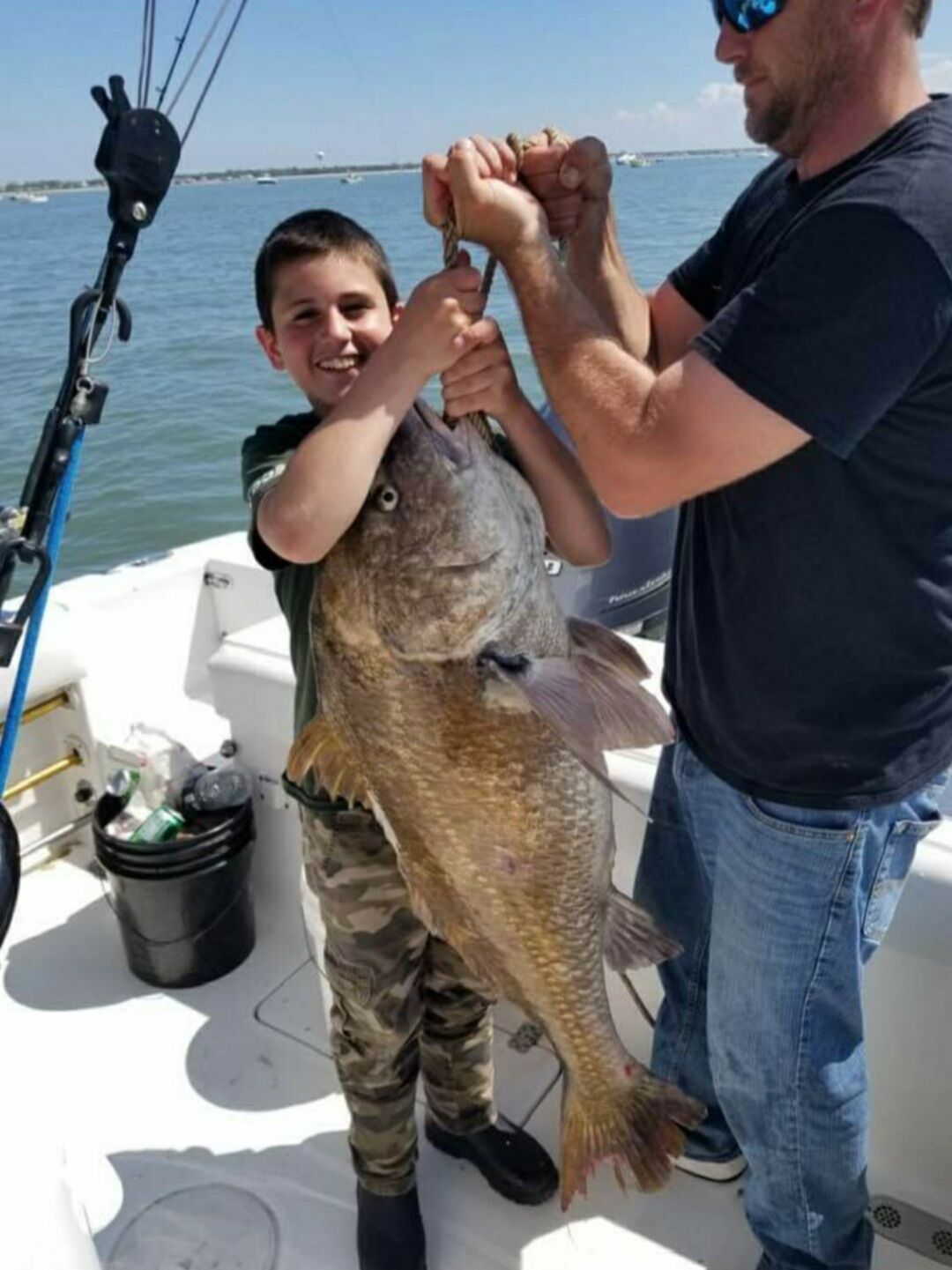 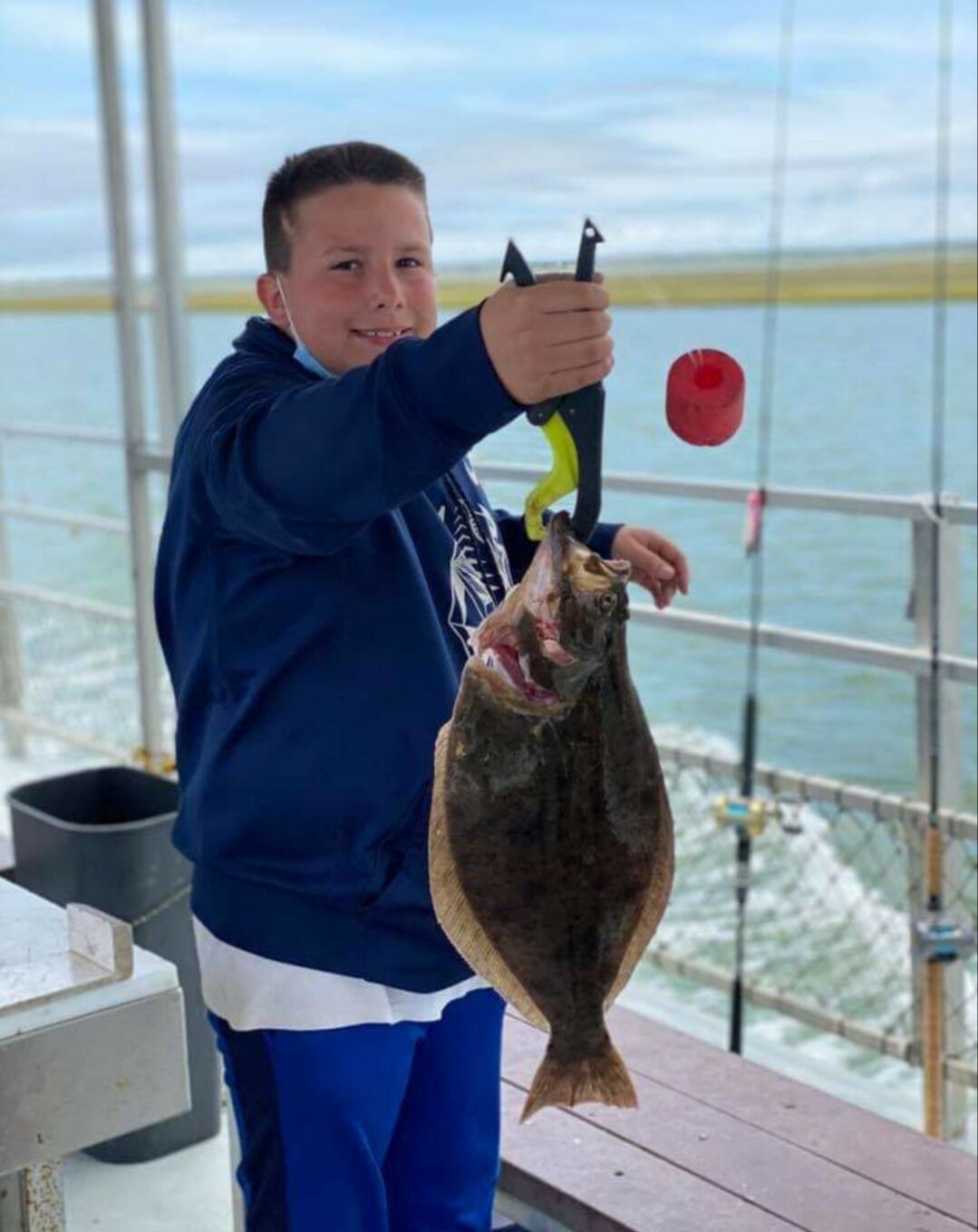 Luke, from Indiana, with his first keeper flounder. 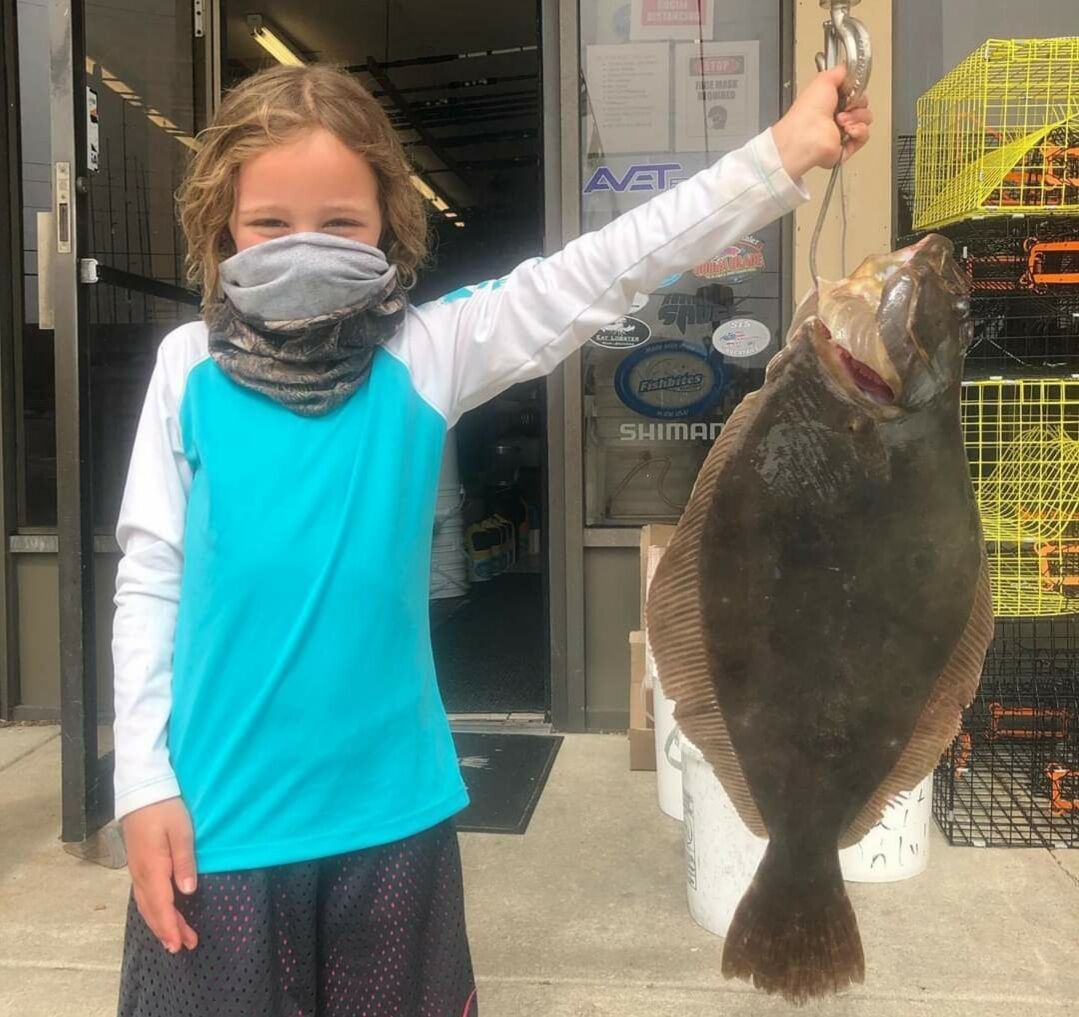 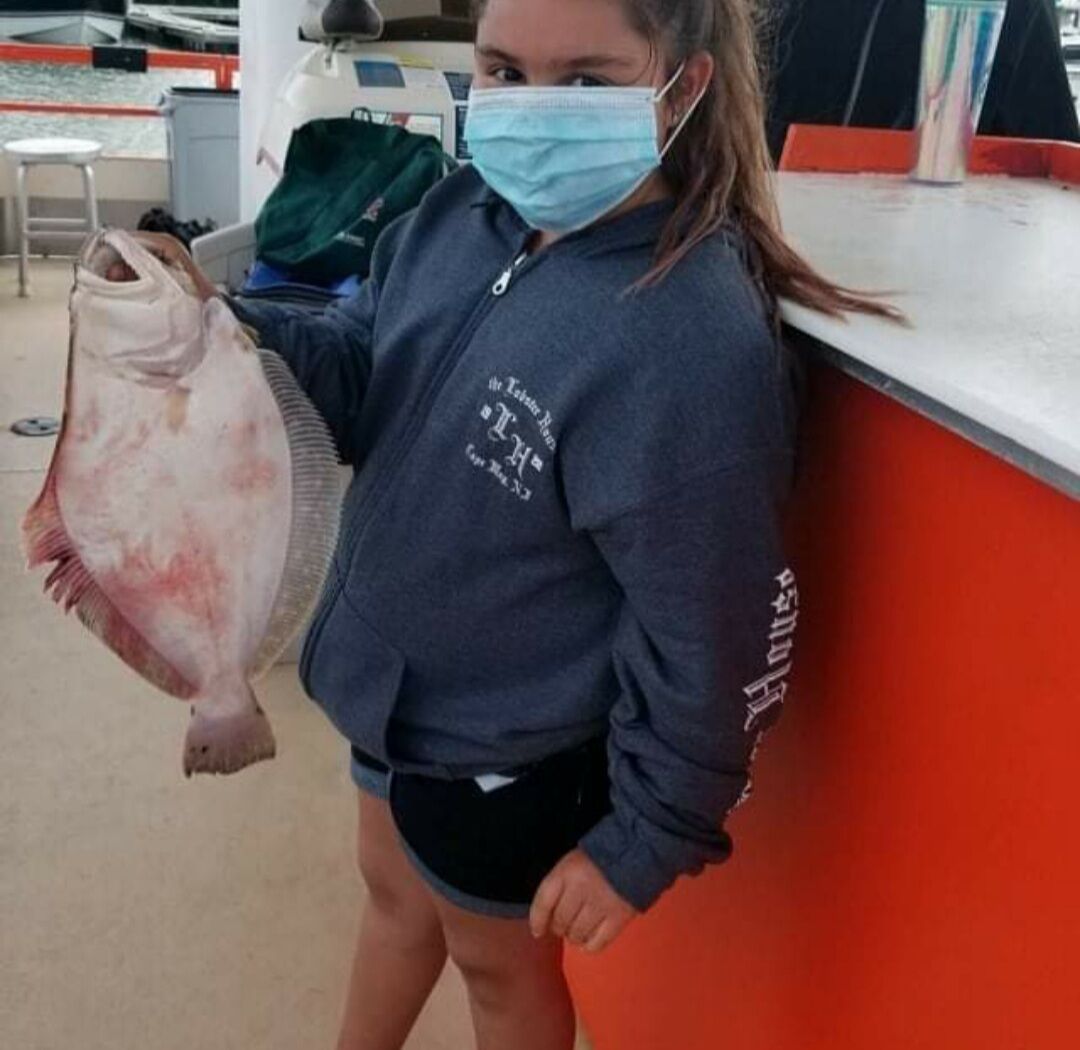 Sophia and her 20.5-inch flounder.

The main cog in the local fishing scene can now legally be kept.

Summer flounder season began May 22 and was a nice addition to the Memorial Day weekend fishing lineup. The weather wasn’t perfect, but it wasn’t severe enough to stop those who wanted to get out.

There were some nice catches recorded, nothing that rattled the scales, just plenty of solid fish. After throwing in some drumfish, striped bass, bluefish and weakfish, the resulting mixed haul over the long weekend was solid. Let’s check out what went on.

Before we get moving, I wanted to send a slightly belated birthday wish to reader and contributor Ryan Morse. His birthday was May 28. I hope he caught a lot of fishing-related gifts.

A special mention goes to 12-year-old Ryken Kuintzle, of Rio Grande, who recently caught his first drumfish, a 52-pounder. He was fishing with his family, and they caught three fish that day. Congratulations on your nice catch, Ryken.

Since they held an opening day contest, we’ll mention the report from Grassy Sounds Marina. The weather may have been less than desirable, but anglers could still catch keepers.

Day one's winner was Chris DeCarlo, whose 23.5-inch flounder topped the scales, at 5.14 pounds. The battle for second and third place was close, as Eric DeLillis and his 3.79-pound, 22.5-inch fish edged out the flounder of Kim Moore, which was 22 inches long and weighed 3.76 pounds. For the record, Kim has bragging rights in the house, as she out-fished her husband. Opening day was also their ninth anniversary, so congratulations to the Moores.

Several other nice catches were recorded throughout the weekend, but a couple of catches of note went to a friend, Jim McHale, who recorded his first keeper of the year, and to another acquaintance, Hunter Tomlin, who also brought home a nice keeper. Nice job guys.

The Cape Queen is running trips for drumfish, but I’m sure they can be convinced to go for sea bass if you'd like. Their recent trips were highlighted by a 76-pound drumfish caught by Debby Turner-Fox, who was the last in her group to hook up but came in first at the scale. The second notable catch went to Krystal Kline, who, while trying for drumfish, landed a 50-inch striper. The large striper was returned to the bay, so it can swim for another day.

Another birthday wish goes to Capt. Andy, of the Cape Queen, who recently turned 87. Happy Birthday and tightlines to you, Captain.

The Cape May Lady continues to ply the ocean and the bay, determined only by the time of day. Morning into afternoon trips seek sea bass, while trips that run from late afternoon into the night are after drumfish. They have been doing well at both, with the drumfish trips probably being ruled a bit more successful.  Pictures showed many fine drumfish that were caught by expectantly happy anglers.

The Sea Star III has also been pulling double duty with day and night trips. They lost some trips due to recent windy conditions but look forward to being able to run for a “full week." During a recent drumfish trip, the high hook and pool winner was Callie Collins, who returned to the dock with a three-fish limit. Congratulations on winning that pool, Callie.

The Porgy IV had a productive week, as several limits were achieved by their patrons. Linda Gilmartin, mentioned in previous columns for her blackfish skills, was one angler who caught her limit and won a pool. Briane K., Jim and Graham Neville, John Szymanski, Fred Nelson and Jim Murray were others who limited out.

Cape May Bait and Tackle reported that Joe, Tim and Greg had a successful day on the bay and returned with three quality drumfish. Another angler, Don, had his hands full, with six sea bass, caught during a recent outing. Finally, Matt landed a big striped bass from the Cape May Beach during a recent morning outing. The fish hit a fresh clam offering.

Off The Hook Bait and Tackle reported that Don Rogers stopped by to weigh a 60.2-pound drumfish. Nice fish, Don.

The Cape May Lady is running combination drumfish and striped bass trips when they head to the bay. If they’re on the ocean side, they are chasing sea bass. Check with them, as with any boat, to see what they are fishing for, and when. The weather kept them tied to the dock on several occasions last week, as some days experienced weather changes on multiple days.

The Sailor’s Delight has been busy bringing in flounder, both keepers and shorts, over the rail. Weakfish and bluefish have also been hitting the deck. A young lady angler, Sophia, tallied a 20.5-inch flounder to finish with the best catch during her trip. They have also been hunting drumfish.

An interesting catch during a drum trip was a 41-inch striped bass. The angler took a picture, then returned the fish to the water.

The Miss Avalon has been visiting the wrecks and structures, where sea bass like to congregate. They have been putting fish in the box, which means fillets on the table.

Meanwhile, the Avalon Lady has been flounder fishing in the back bays. Many keeper flounder have been caught. The best day of the new season was May 27, as 10 nice keepers, including the season's first limit, were recorded. Over 70 throwbacks were caught, plus a couple of bluefish were caught.

This also marked the first flounder trip for 10-year-old Luke, from Indiana. He marked the occasion by catching his first keeper flounder amongst his haul of six fish. Nice effort, Luke.

The Starfish, out of Sea Isle, has been catching sea bass during their trips to the ocean. They have also pulled in codfish. That’s good eating, no matter how you fillet it.

First Fish Adventures was busy fishing on either side of the Townsend's Inlet Bridge. They were catching sea bass, ling and pollock from the ocean side and pulling flounder from the back bays. Choose whichever you wish, as both sides are producing.

Capt. Al has the patrons of the Bayhound on flounder, sea bass and bluefish. As expected, flounder are coming from the backwaters, although one charter did record the first keeper for the year from the ocean. From one sea bass trip, Al reported nice clean water 10 to 14 miles offshore, and he was expecting to hear of some Bonita action soon.

Avalon Hodge Podge was busy, with anglers showing off their flounder, but the week was led by Joe's 23-inch striper. He caught it from a local beach.

Boulevard Bait and Tackle weighed some excellent fluke during the week. Leading the way was the 26-inch, 5.91-pounder caught by an angler named John and the 25-inch, 5.16-pound flattie caught by Kylee Rothmel. An honorable mention goes to Talia, who landed a 22-inch flounder in the back bay. A 34-inch striped bass was registered by Joe, while Matt came in with a 32-inch striper. Bunker and clams, respectively, were the baits of choice.

Sea Isle Bait and Tackle was busy weighing flounder, as Anthony stopped in with a 3.15-pounder, and Mike Willis had a 22-inch, 3.55-pound fish. The top flounder of the week went to a young lady angler named Simone M., who caught a 6.05-pounder.

Lots of fish and plenty of action. Just the way we want it.

Get fishing, take care, and I’ll see you around.