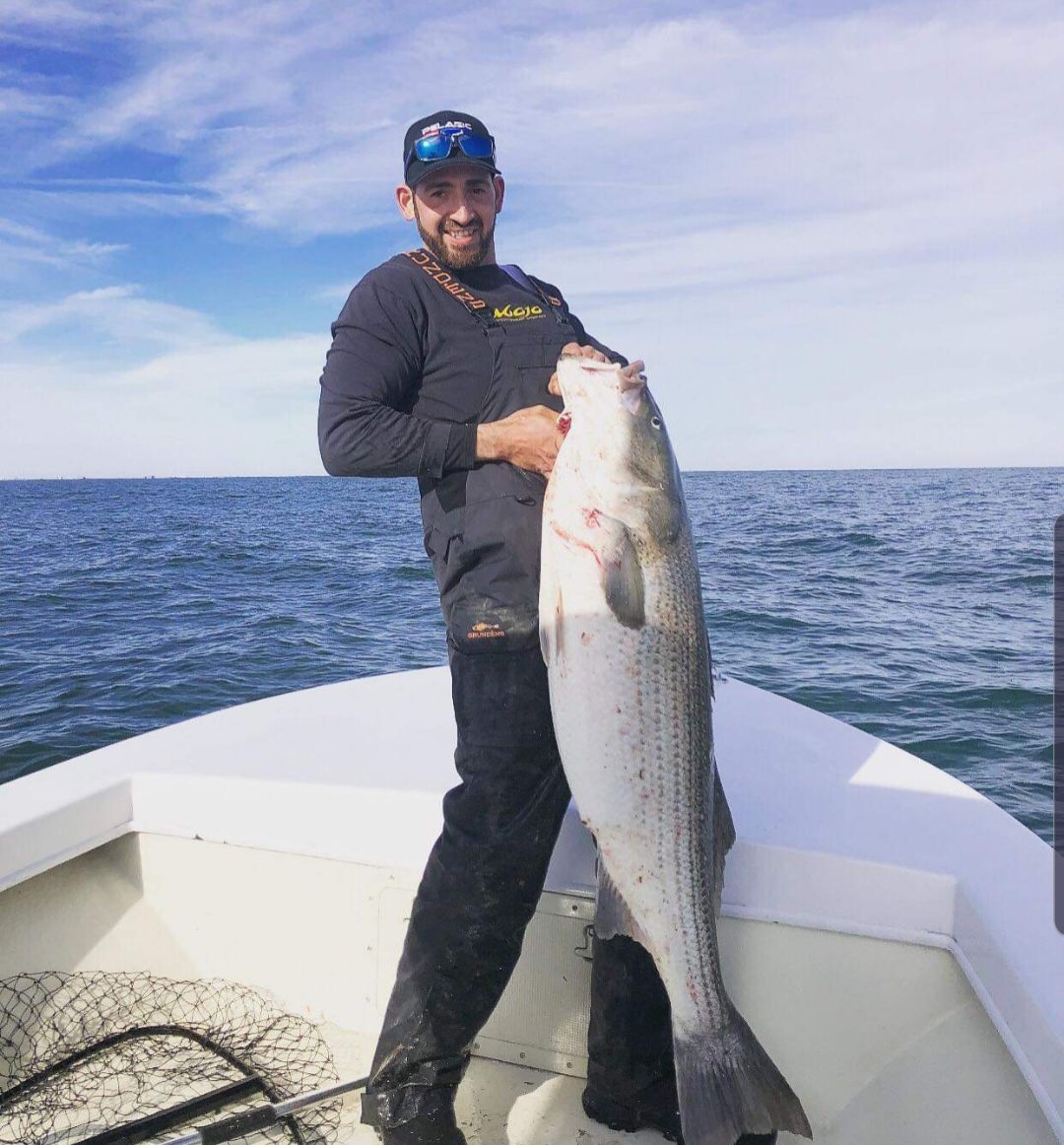 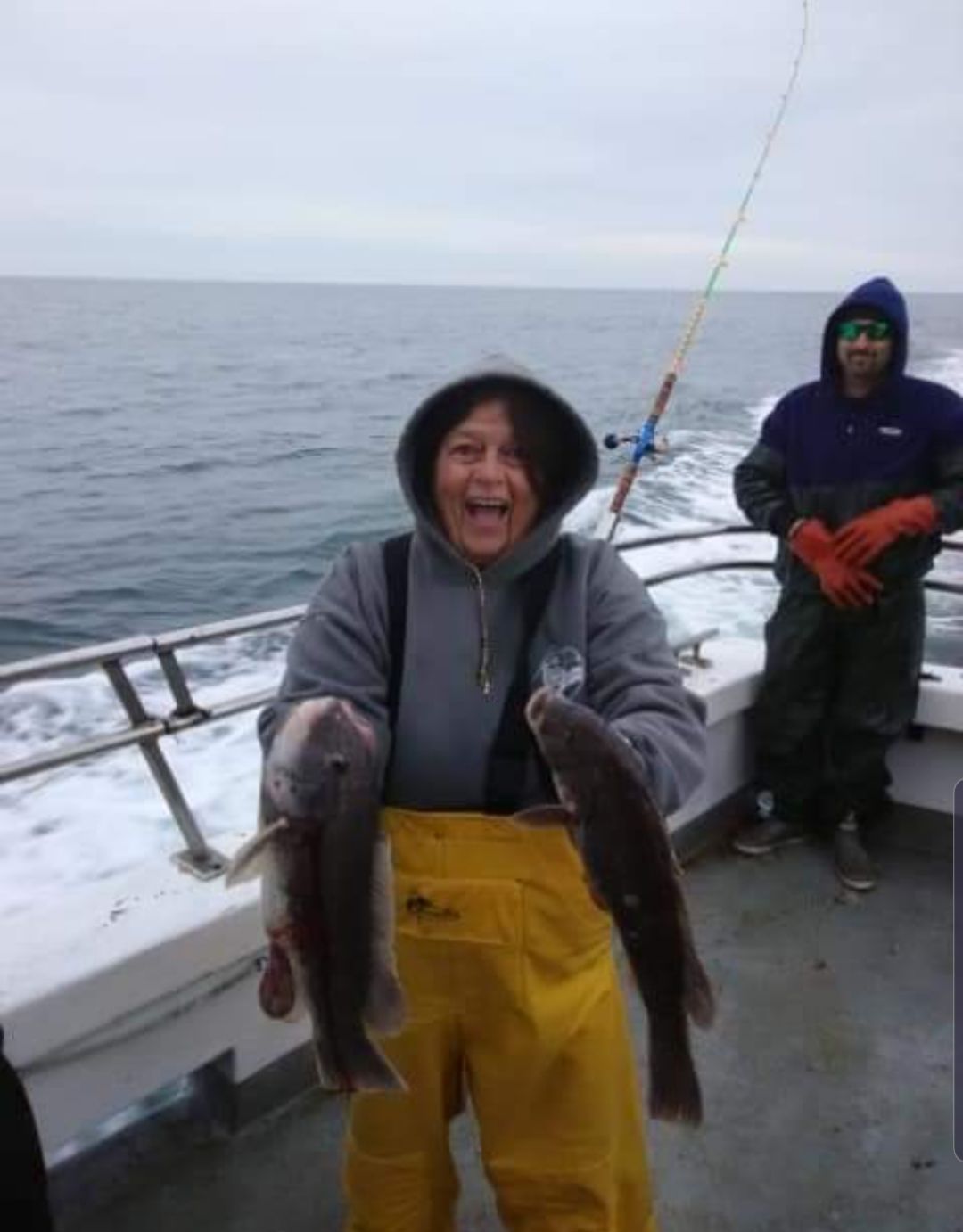 Linda and two nice blackfish, including her pool-winner. 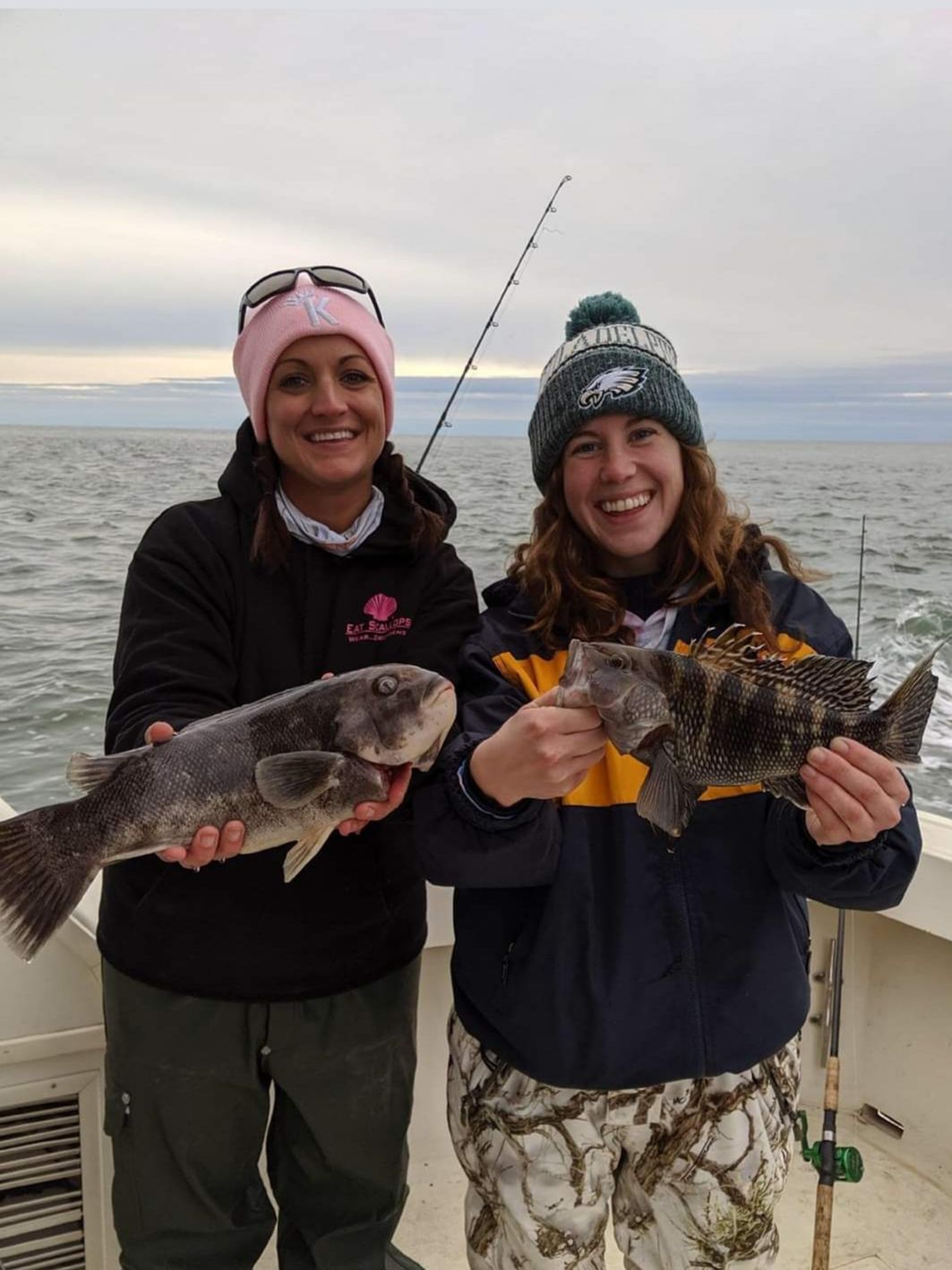 Two happy ladies with their blackfish. 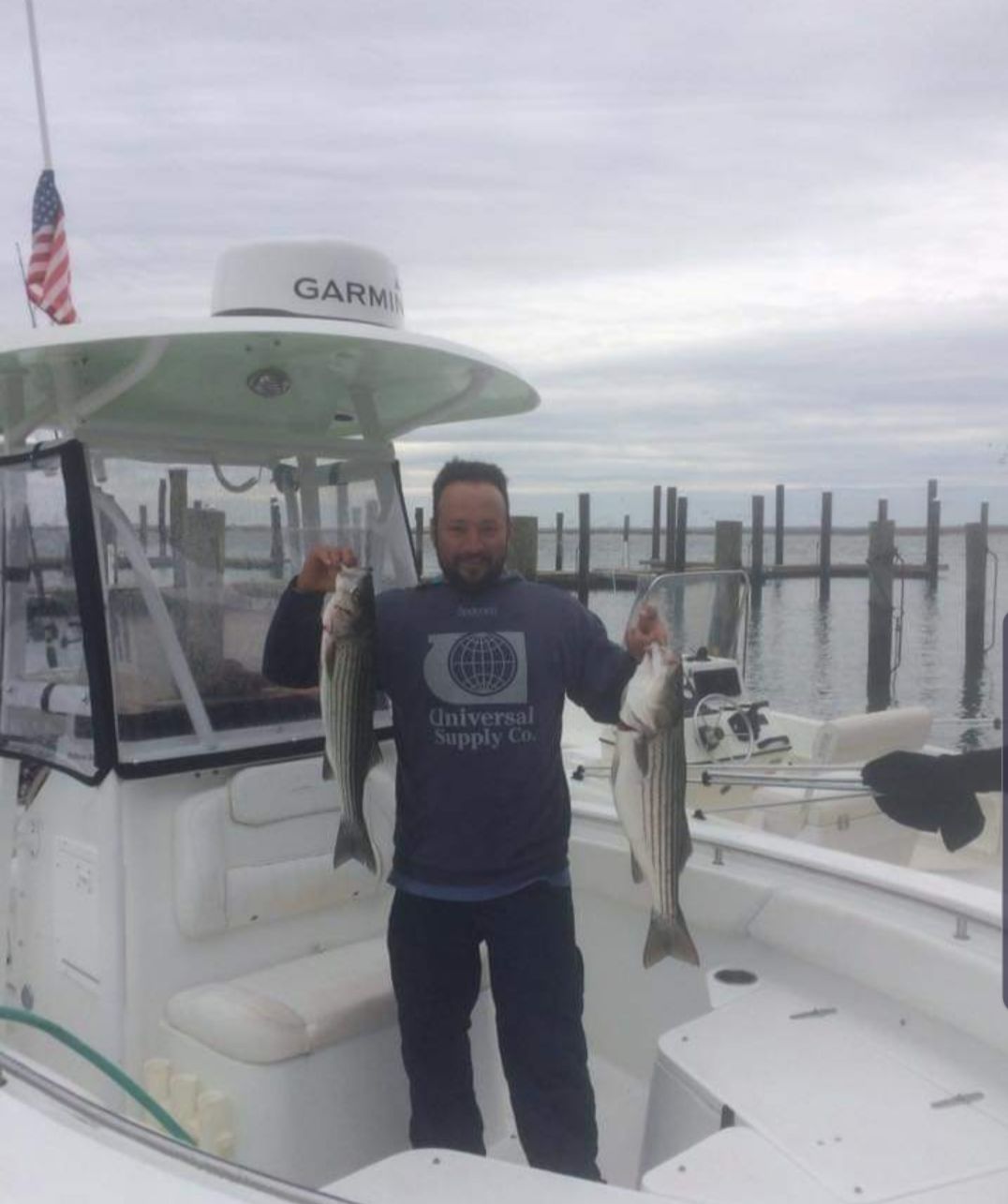 A happy angler and his two stripers.

One day does not make a weekend, but for Saturday, Nov. 23, a lot seemed well in the Cape May County fishing world. The weather was great, with sunshine, seasonal temperatures, and no wind. The lack of any wind was paradoxical, as it made for a difficult time when anchoring on a structure for those fishing for blackfish.

A little wind is best, but overall, it was a day that no one on the water could complain about. Sunday was a different story, as conditions were more challenging. Also, the stripers that many have been waiting for were being caught off Sea Isle and just south of there.

Let’s check out what occurred.

Saturday was a busy day at Boulevard Bait and Tackle. Cameron reported that Capt. Matthew Leusner was “on them again." He also mentioned that Capt. John Maz had the Reel E Hooked Charters “dialed in on the fish."

John had Devin and his friends on the fish Saturday, and they landed five stripers, with the biggest measuring 48 inches and weighing 40.5 pounds.

Cameron also was taking a lot of calls letting everyone know that the fish “are inside the line." That line is the 3-mile line off of the coast. If you’re chasing stripers, be sure to stay inside of the line or risk a heavy fine, so be safe, and stay inside the line.

Sea Isle Bait and Tackle stated that reports of nice stripers started coming in "at sun up" on Saturday. The fish were hungry and ready to eat. They weighed in many fish over 30 pounds, with the biggest topping out at 41 pounds.

On Sunday morning, despite the rain and wind, two anglers stopped in after braving the conditions to show off their haul. They were part of a charter on a Reel E Hooked Charters trip that caught stripers, where the largest reached 48 inches and 42 pounds.

The Miss Avalon had a full charter on Saturday, as the weather inspired anglers to go out. They had nice keeper blackfish, plus a nice sea bass. A father-son duo caught five keepers, plus, the dad schooled everyone by winning the pool.

Capt. Al, of the Bayhound, wanted to send his congratulations to his friend, Tom Schad. Tom, who has “a couple” 50-pound plus Delaware Bay stripers to his credit, recently landed his largest striper caught on artificials and spinning gear. The fish weighed 42.5 pounds, and was the largest fish in that class caught while fishing off of Townsend's Inlet.

On Saturday, Al took his charter out for blackfish. The lack of wind made for tough anchoring, but Rob Lukens and crew were able to make it work. One angler, Steve, caught his “personal best" and first double-digit blackfish, weighing 10.75 pounds - congratulations Steve.

The Starfish, in Sea Isle, has been getting out as much as possible. Due to that, they have been racking up great trips.

Multiple fish catches were recorded, as well as one angler who recorded his limit. Contact them to get an up-to-date schedule of trips.

Avalon Hodge Podge weighed in a nice 37-pound, 46-inch striper, caught by Bob Scatina. He caught the fish on a niner, off of Sea Isle.

First Fish Adventures reported that Wellington Alvez was aboard during a recent trip. He caught one regular (28-43-inch) striper, plus, he put his bonus tag to use, and landed his slot fish. That was a great trip.

The Sea Star III had a nice week of fishing for blackfish. They had some nice keepers, plus a lot of “shorts” that contributed to the action. Capt. Chuck expects the action to improve as the water temperatures cool.

Recent blackfish pools, with weights, were caught by Gary Agness (3.25) and Andrew Thomas (4.80). Capt. Chuck is also keeping an eye on the stripers as they move south along our coast. If they arrive en masse, he has previously mentioned that he may switch over to fishing for them.

Stay tuned, in case he changes his fish of choice.

The Porgy IV, led by Capt. Paul, had a series of nice trips. On Saturday, Bob Key walked away with the pool, as he caught four, the largest weighing 6.5 pounds. Kevin Olbrich had a limit, topped by a 5.5-pounder. Joe Murray also limited out.

After the wind and dampness of Sunday, Monday provided early action, but nothing of substance. The keepers came later in the day, with some anglers taking home three to four keepers.

Mike Wolf led the pack, with a 5.5-pound fish among his four keepers. The mid-week trip resulted in some quality fish, as Vince Ellis was the pool-winner, with an 8.5-pound fish.

The Miss Chris was out recently, and “got in on the tog and sea bass action." They took advantage of the pleasant weather, which provided them the opportunity for plenty of throwback action, plus some nice keepers.

They also had “plenty” of dogfish hitting the bait, which bent the pole and excited everyone, but it didn’t do much for a fish in the cooler. That’s alright though, as the sea bass and blackfish were the actual species of interest. You can book a trip at capemayfisherman.com.

The Cape Queen was active on Saturday, as their charter landed over 100 sea bass, some porgies, and a large triggerfish. A couple of days later, after the wind, their patrons brought in 57 sea bass, several porgies, and bluefish. They’ve been staying busy by bringing in a nice mixed bag on each trip.

Jim’s Bait and Tackle reported that the “Killer Banana” crew landed four nice stripers on their Saturday excursion, with one  fish breaking the 50-pound barrier, as it registered 52.4 pounds.

The Cape May Lady ran one of their special trips for blackfish recently. It was a “super pool” trip, which includes a larger fee to enter the pool, but also gives a greater payout. The increased stakes means everyone is trying harder not only for the prize, but also for the bragging rights.

The winner during this outing caught an 8.5-pounder. Solid fish were caught, with 25 that weighed over 5 pounds. Multiple anglers caught their 5-fish limit.

When the weather cooperates, the fishing has been great. A nice mix of fish is still being caught. Hopefully, that motivates you to get out and get fishing.

If you get out and catch them, let me know. Tightlines, and I’ll see you around.