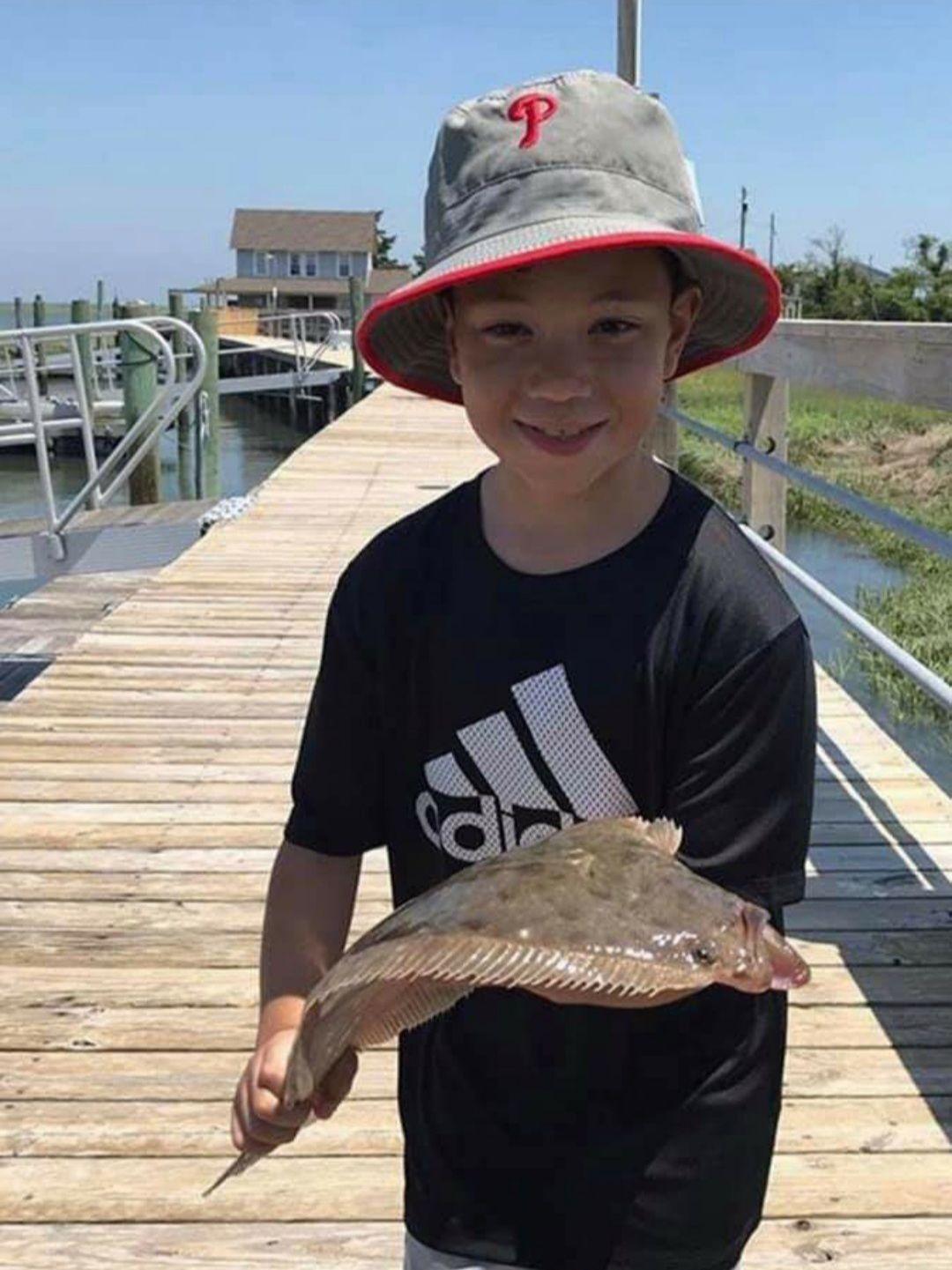 Jordan Roverano and his first flounder. 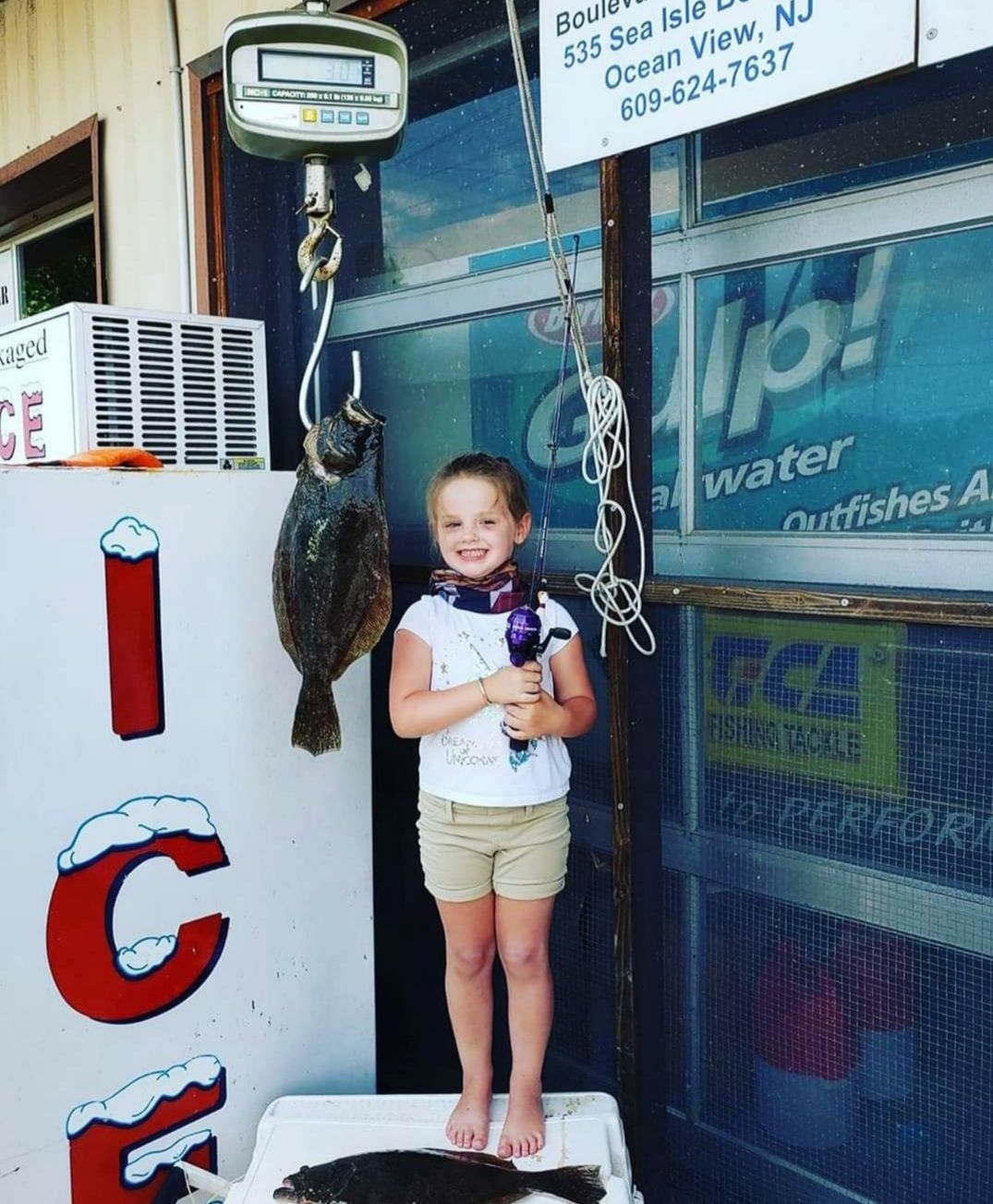 Gracie and her 3-pound, 21-inch flounder. 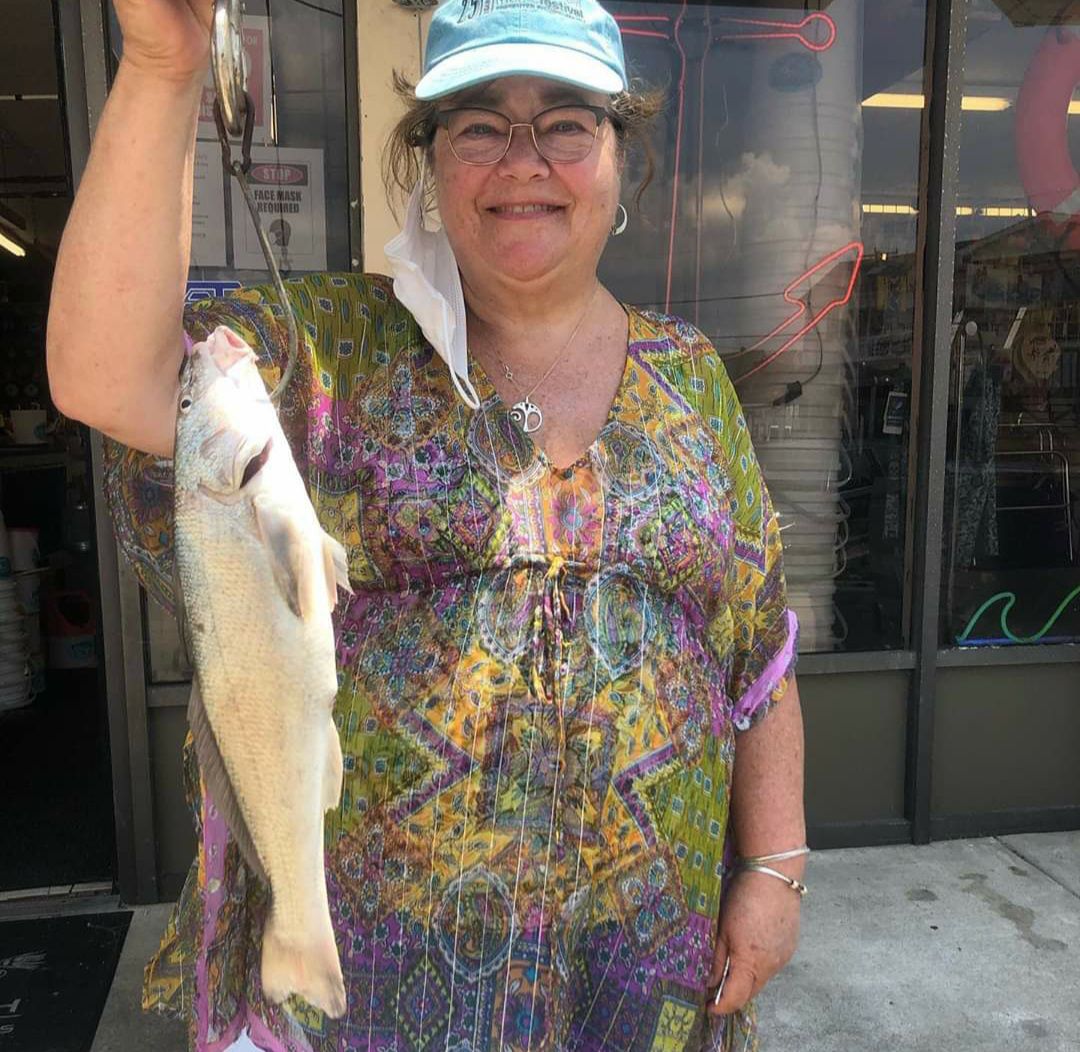 A large kingfish for Deb T. 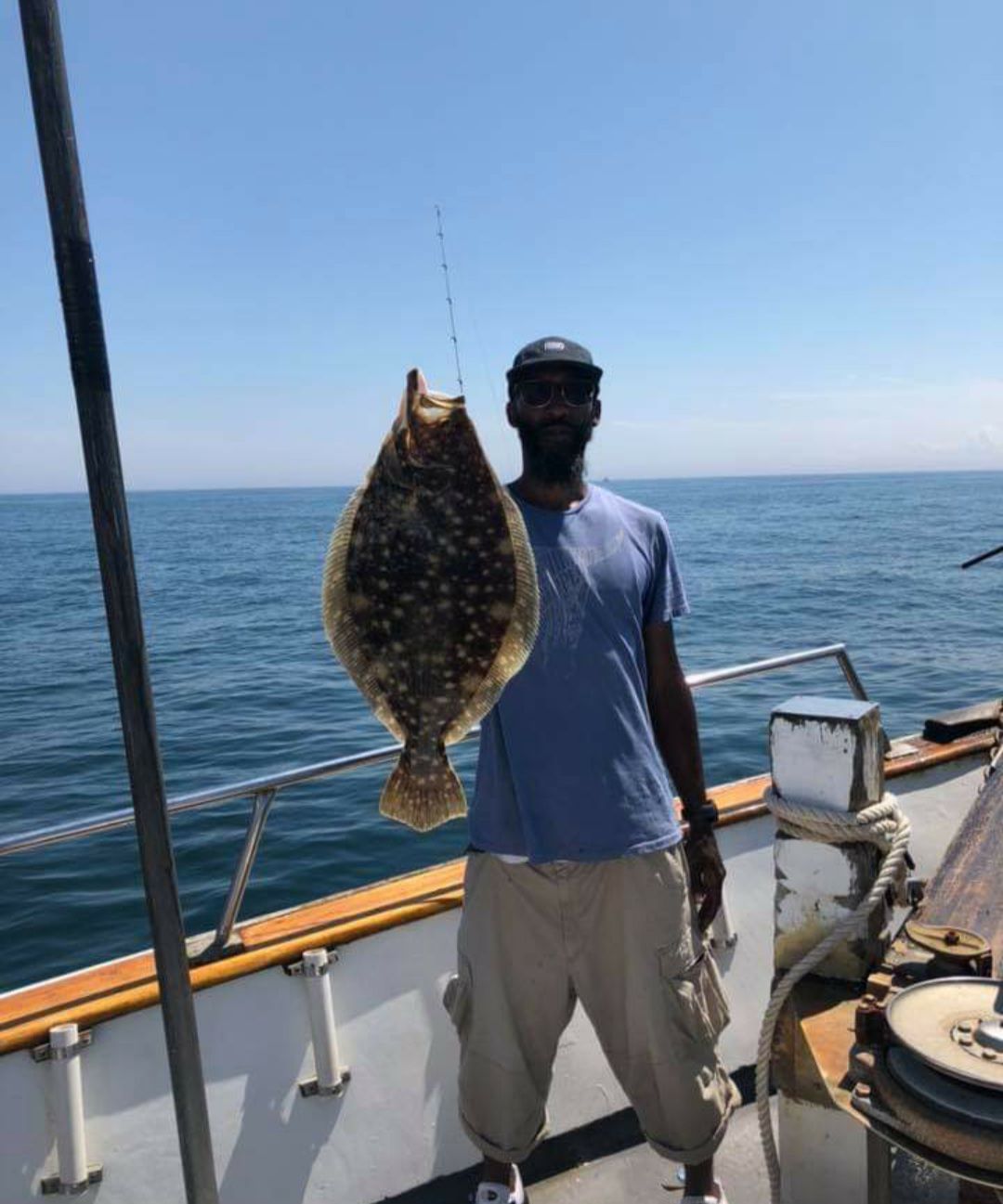 Everett Fleming and his pool-winning flounder.

Another hot stretch of weather provided some great opportunities for fishing.

Reports show that different fish are available. You may be targeting one particular species when leaving the dock, but when your trip ends, you could be returning with a nice mixed bag.

Also, if you want to catch some tuna, this seems to be the time. Their bite has been hot lately. Charter boats and private anglers alike are enjoying the great times catching different species off our coast. Let’s check out the reports.

The Miss Chris split their week by fishing the Cape May Point area and the Cape May Reef. They enjoyed the nice weather and had some great catches. Recent pool-winners were Tim Munez, with a 20-inch fluke, Vince Carr, and his 21-inch fluke, and Luke Burcher, with a 19-inch weakfish.

The Sea Star III had another nice week of productive trips to the local reefs. Flounder, with some anglers hitting their limit, plus sea bass, ruled each day. Capt. Chuck hopes this action and productivity “keeps up."

The Porgy IV also had a successful week of trips, as flounder dominated the action. Brian Noreski (5 pounds), Mike Gouda, Tom Sebastian, Sean McDonald, Doug Stemple and Everett Fleming were the pool-winners for the week. Some of the pool fish reached the 23-inch mark. Multiple limits were also recorded throughout the week, as less boat traffic after the busy holiday weekend led to more activity.

Cape Queen Sportfishing Charters is running their bay shark-fishing trips. Kunal Parikh and friends recently enjoyed a trip to the bay. Also offered are sunset cruises, like those enjoyed by the Massek and Heney families. Call ahead to secure your trip.

Full Ahead Sport Fishing had an interesting week. They had a nice trip chasing yellowfin tuna, which saw them land nine. A Mako stopped by and made a meal out of one of their tuna before they could get it in the boat.

Also, while doing a flounder charter, they hooked some unexpected catches. Those were a couple of drumfish that hit the gulp-tipped bucktails. The surprise catches are what keeps everything interesting.

Off The Hook Bait and Tackle heard about a productive tuna trip for Dave Federico and the crew of the Jersea Green. The tuna action for yellowfin, bluefin and bigeyes has been hot.

Cape May Bait and Tackle mentioned that the surf has been a great spot lately, as weakfish, flounder, kingfish and snapper bluefish have been caught. John B. caught a weakfish from a local beach while using a minnow as bait.

Flounder are being caught at the Cape May Reef, McCrays and Reef Site 11. Spearing, minnows, and Gulp have been the hot baits. The offshore fishing scene has been “excellent” for bluefin tuna at the “mid-shore spots," while bigeyes and yellowfins are at the canyons.

Hands Too Bait and Tackle reported that a young angler, Cam, picked out some Gulp at the store, which were used to catch two flukes that measured 19 and 21 inches. He should choose the bait more often.

The Sailors Delight is showing that in addition to flounder still residing in the back bays, they are joined by some nice weakfish. The action is solid across all three daily trips that they are running. The orange pontoon boat is an excellent way to introduce young anglers and visitors to the fun of fishing.

The Cape May Lady had another quality tilefish trip. They caught golden tilefish up to 39 pounds. These are trips that you should call ahead to confirm and make a reservation. Blueline tilefish are also being caught.

Sterling Harbor Bait and Tackle will be running their 27th Annual Duke of Fluke Tournament this Saturday. There is free entry for the boat and kayak divisions, and multiple prizes will be awarded, in various categories. If you are on the fence about getting involved, now's the time to get moving. Entry forms are available at the store or on their website, at www.sterlingharbor.com.

At Five Fathom Bank, David Palestini and his grandfather had a nice day by catching Spanish mackerel. Quality family times, I’m sure.

Peace Token reported some nice flounder being caught by Keith Wagner and Josh Nau. They were using the Salt Bug Jig, which is sold at the store or online. They also have them for sea bass.

The Miss Avalon is staying busy by hitting the Wildwood and T.I. reefs. Their patrons are catching flounder, sea bass, some weakfish and plenty of triggerfish. They are sailing two trips daily, at 8 a.m. and 1 p.m.

The Avalon Lady Fishing pontoon boat, the younger sister vessel of the Miss Avalon fleet, is still grabbing some nice flounder from the back bays. They are also running crabbing trips. Call (609) 967-7455 for details and dates for when these trips are scheduled.

The Starfish is sailing two trips a day, at 8 a.m. and 1 p.m. They are catching triggerfish, flounder, sea bass and the occasional weakfish and kingfish. Anything from that mixed bag is great to eat.

Boulevard Bait and Tackle continues to report nice fluke catches. Tony had a 23-inch, 4.4-pound fish, while Mike and Lisa concluded a great day at the reef by stopping in to show off their three keepers.

A surprise catch, like one listed previously, was an estimated 60-pound drumfish caught by Dean Mel, who was fishing for fluke at a local reef. He released it to fight again on another day. Finally, a young lady angler, Gracie, weighed her first self-caught flounder. It measured 21 inches and weighed 3 pounds.

Sea Isle Bait and Tackle reported that Deb T. stopped in to show off and weigh her 2.15-pound, 19 7/8-inch “jumbo” kingfish. Add a few more kingfish to that one, and you’ll have some nice fillets for fish tacos.

Avalon Hodge Podge reported that the Morgan family stopped in with some yellowfin tuna. They caught them while trolling ballyhoo.

Take advantage of this great weather and do some fishing. Good luck, and I’ll see you around.