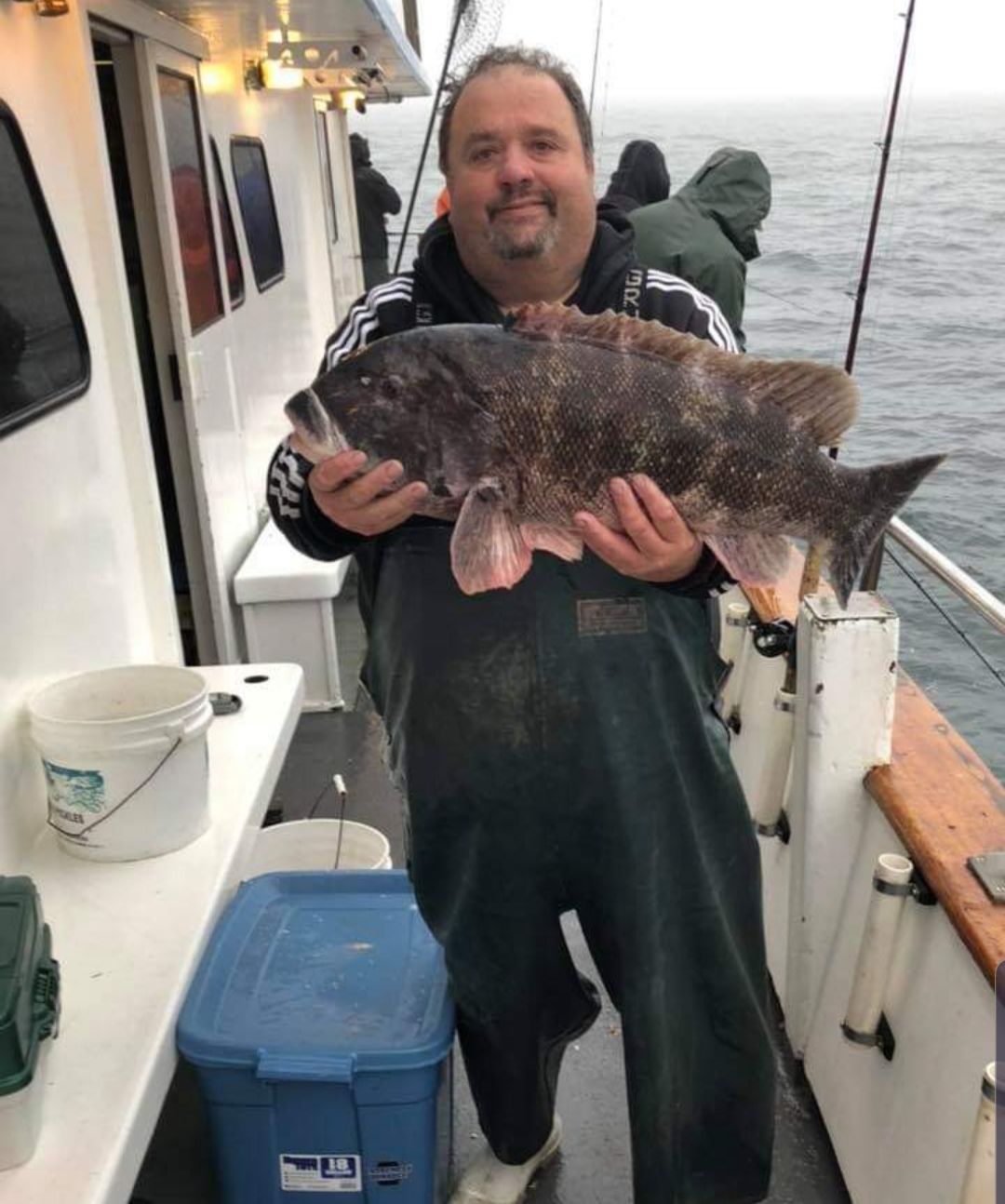 Alex Levantovsky and his 15.25-pound blackfish. 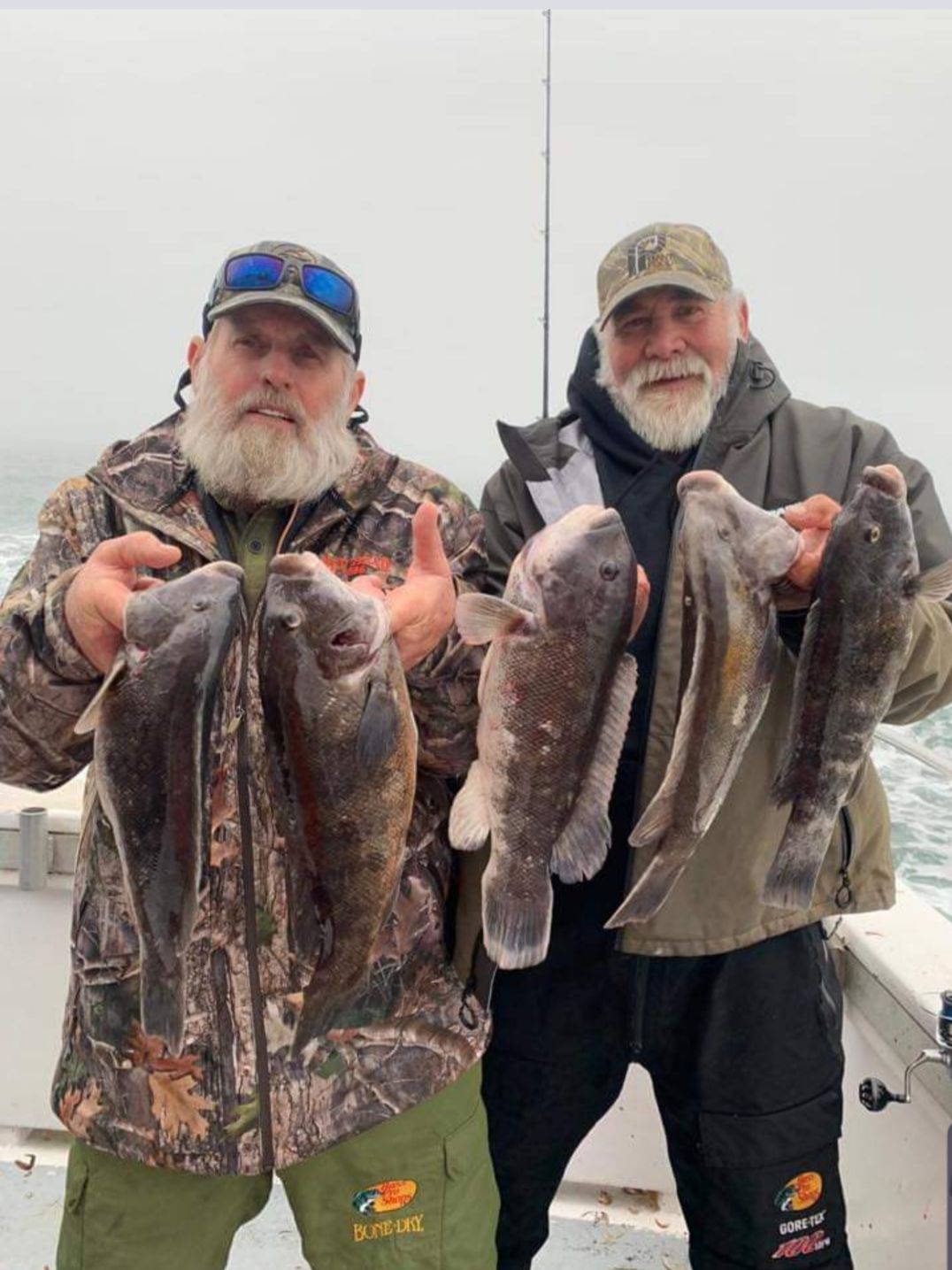 Two happy anglers with their catch.

It’s that time of the year where we are down to basically one target for the local anglers.

When sea bass season closed Dec. 31, blackfish became the main game in town for the boats still sailing. Catching them is challenging, so if you have one fish to go for, they are a great choice.

The problem this week, as usual, was the foul weather, which slowed fishing and made for a light week of action. Another boat called it a season, while the remaining boats still go out when they can. There is also news on new regulations concerning bluefish.

Let’s see what went on recently.

The Porgy IV, with Capt. Paul, is getting out when Mother Nature cooperates, which isn't as often as everyone would like. When they can leave the dock, they have caught nice fish. Some anglers have had great results, while others have had tough outings and less success.

They say that’s why it’s called fishing, not catching.

The angler with the recent hot hook was Alex Levantovsky, of Philadelphia, who caught his four-fish limit (don’t forget, the limit is now four). It was his second keeper of the day, a female blackfish weighing 15.25 pounds, that got the most attention. He released the fish, and his kind act was rewarded, as he caught three more keepers.

Another limit was caught amongst the other anglers while other keepers were scattered around the boat. Stay in touch with Capt. Paul, at (609) 884-1214, to see when he will be running. As always, the weather dictates the situation.

The Osprey, sailing out of Atlantic City, made its first trip of the new year Jan. 2. The bite wasn’t outstanding, but it wasn’t non-existent either. For the record, Paul Tomaski recorded the first limit for 2020.

The Saturday trip, again, proved slow on the bite, but there was a steady pick in the fog. The thought of the warmer conditions we have had the last few weeks was considered as a reason for the recent slow bite. Hopefully, as the captain is figuring, if the temperature drops slightly and stays down for an extended period of time, the bite will pick up. Here’s hoping that thought is accurate.

The Starfish ended their season after the start of the new year. They plan to begin sailing for blackfish April 1, so circle the date. Take care Capt. Bob, Capt. Mike and crew, and enjoy your break.

These measures include a three-fish bag limit for private anglers and shore-based fishermen, which represents a large reduction from the previous 15-fish bag limit that was standard since 2000. There is also is a five-fish limit of for-hire fishermen. As of now, no limitations have been made to minimum fish size or seasons.

Additional information and updates are available at www.mafmc.org/actions/bluefish-allocation-amendment.

As a reminder for those who requested a striped bass Bonus Tag and received it, don’t forget to return your fishing log as soon as possible, even if you didn’t record anything on it. It will be late, as of this column, but fill out the part you need to (name and tag number) and mail it. By doing so, you will remain eligible to apply for another, if the program is used later this year.

Our chances to fish are dwindling as the weather continues to cause havoc, especially on weekends, which is funny how that works. Not literally funny, but rather just unfortunate, as the weekends are the busiest periods this time of year.