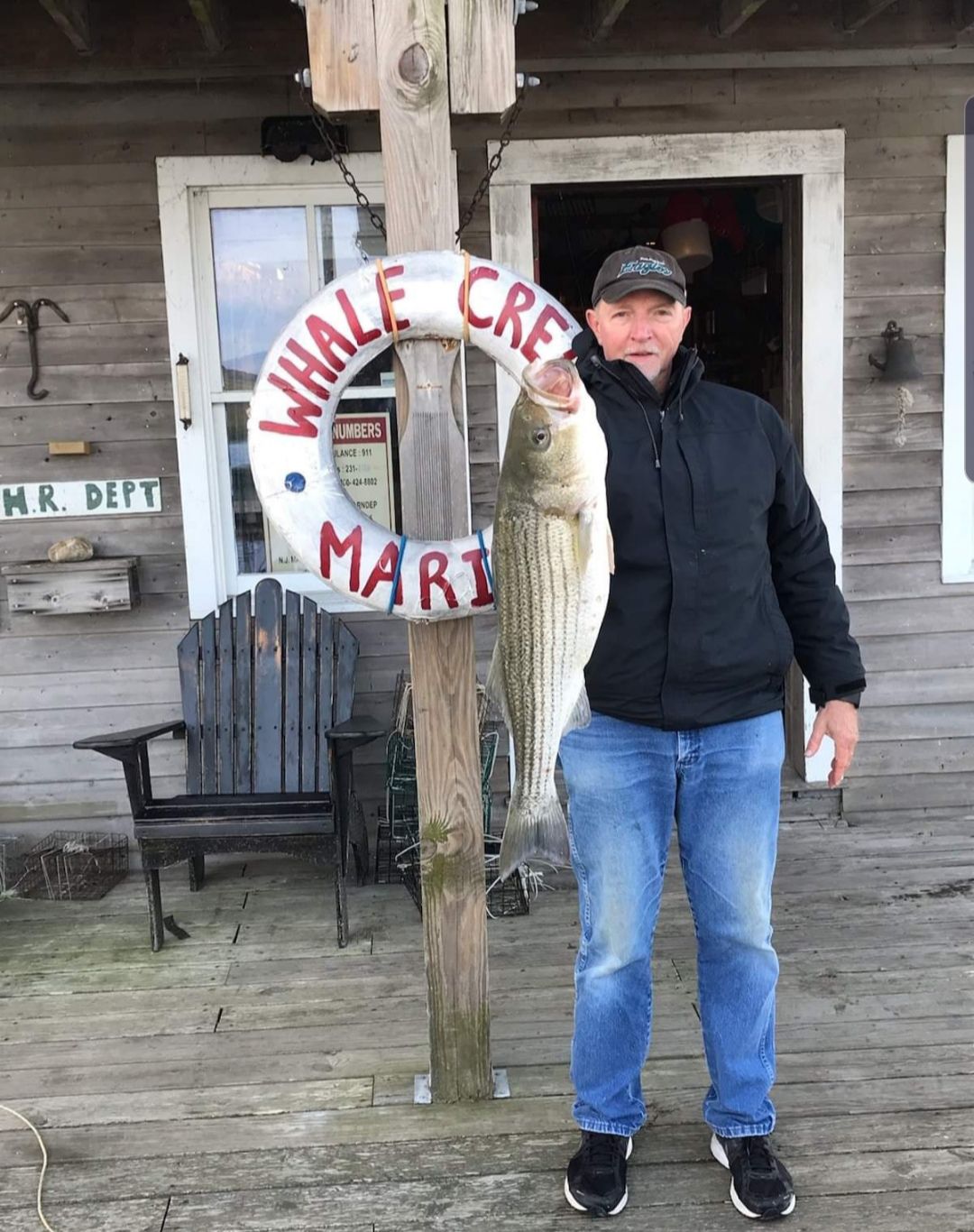 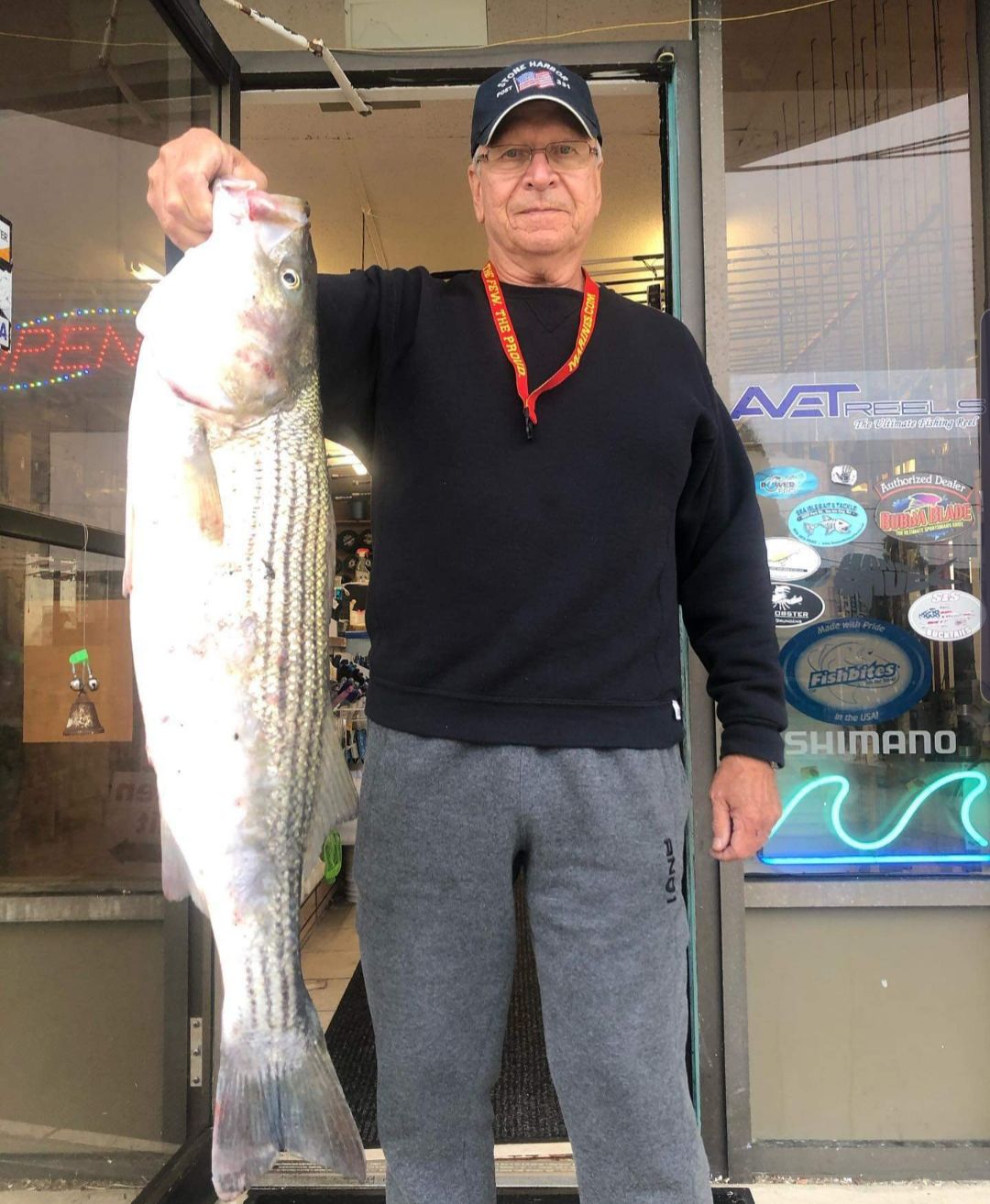 John with his nice striped bass. 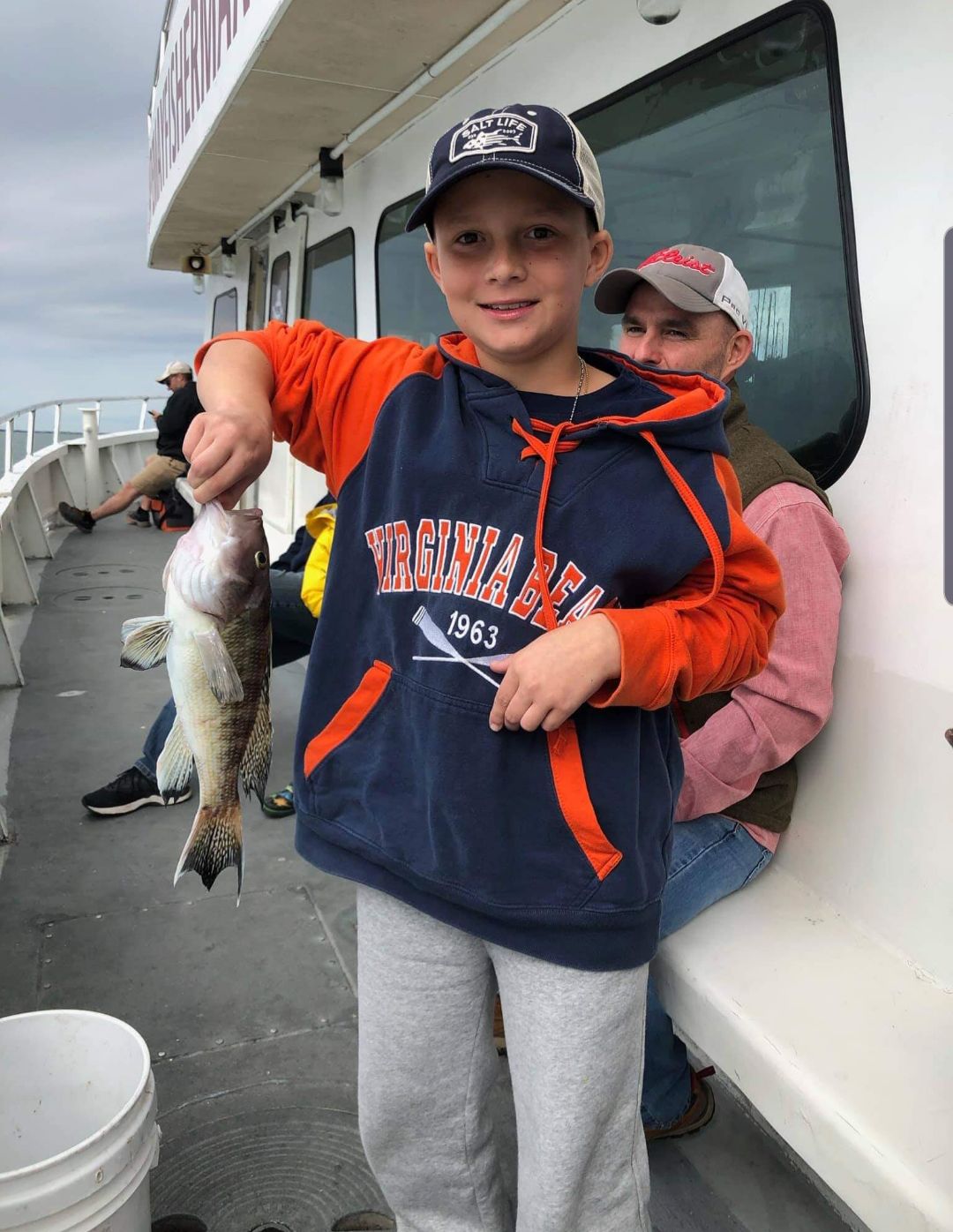 A young angler and a nice sea bass. 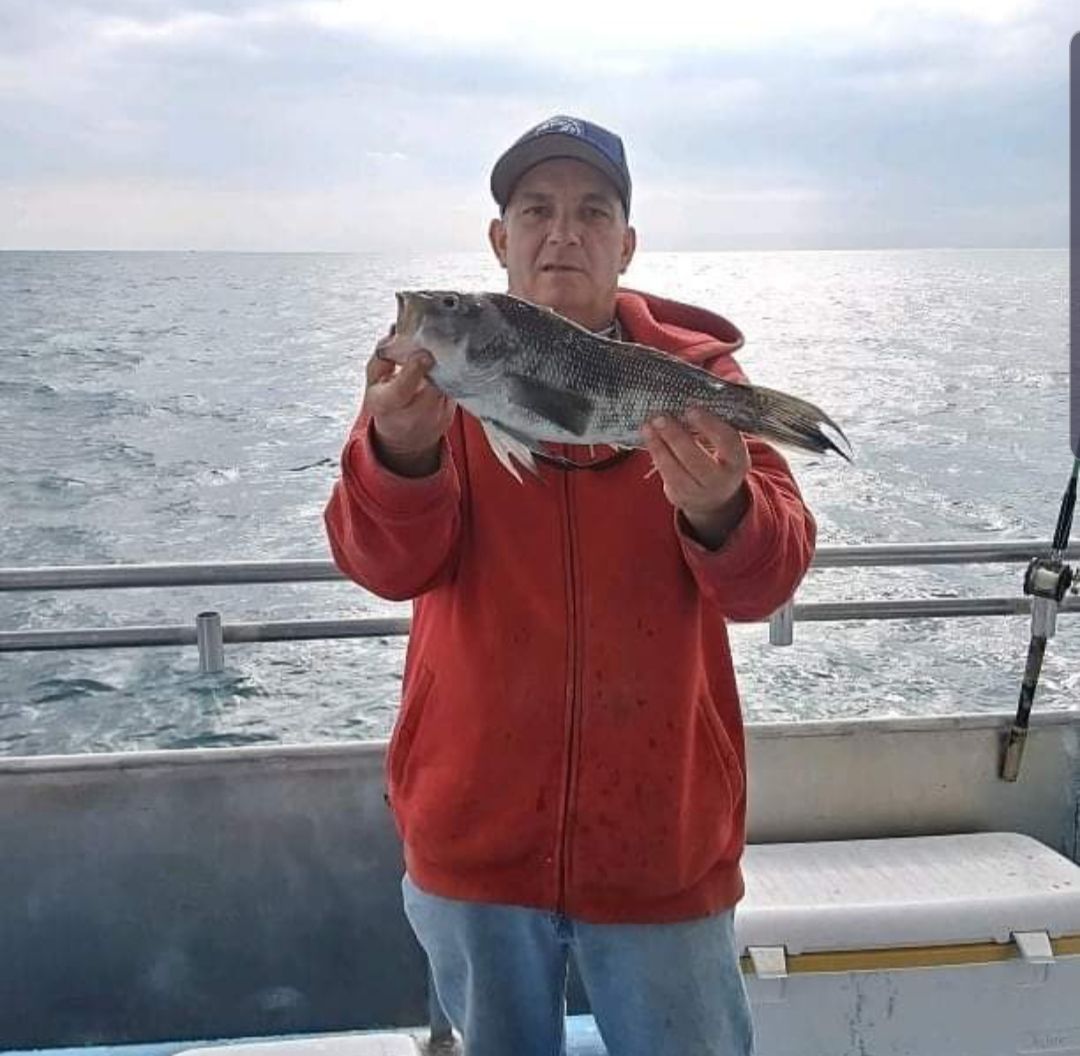 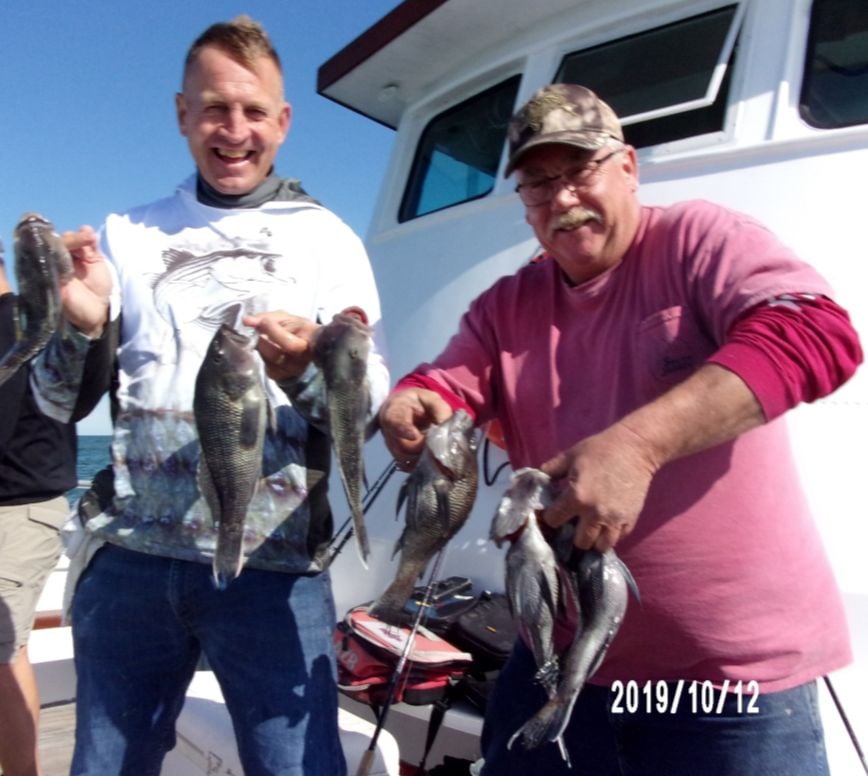 Happy anglers with their sea bass.

Well, it finally seems that the slowly lingering nor’easter is moving away from our area.

Thankfully, not much rain accompanied the storm, or the shore towns would have had it a lot worse. Flooding occurred, due to tides and winds, but any additional rain would have only exasperated the problem. The storm's departure has allowed the return of fishing as the boats, which had been moored at their docks, were finally able to head out with patrons who wanted to pursue tasty sea bass.

Let’s check out what transpired.

The Sea Star headed out, the first worthy day to go out as the weather improved, and they were looking for sea bass. The opening was delayed a few days, “but when we did get to them, it was good.'' They had “good action,” and a “good amount of keepers."

This resulted in “10 bass limits” around the boat. The pool winners this week were, as expected, sea bass. The winners, with weights, were Bill Baker (2 pounds) and Vinnie Sallustiowith with a 2.25-pounder.

They will continue to sail daily at 9 a.m. as the weather and the number of patrons allows.

The Porgy IV started its fall season. Capt. Paul reported that they encountered, “a sloppy ocean with a big swell." They did find “some bites on several spots,” but overall, there were “not a lot of keepers."

Even with the challenging conditions, the high-hook took home nine, while “all had a few for dinner."

There was "better action" Oct. 13, as more keepers were caught. Limits were caught by Lee and Polly Moyer, Ralph DeAngelo, and Will Metri, all from Pennsylvania. Don’t worry though, as a local guy, Bob Brett of Court House, also got a limit while representing the locals.

Oct. 14 saw results that weren’t hoped for. Paul “took a longer ride” while checking out “what was around." Everyone went home with “a few for dinner" at least.

Paul described Oct. 15 as a “better day today, with action and more keepers." The winner of the day was Ben Werntz, of Marmora, who landed his limit of sea bass and won the daily pool with a 4.75-pound triggerfish. Other limits that day went to Matt Lamelza, Andy Siganuk, Joe Filippone, Joe Merlino, and Tom Sebastian.

With all those limits, and by doing the math of angler times, we can see that it was a successful day.

Capt. Mike from the Miss Chris was eager to get out when the weather cleared. He was running four-hour trips, and reported a “good mix” of throwbacks and keepers. Most anglers caught sea bass, but one angler also pulled up a nice triggerfish.

They are a tasty fish to catch that thankfully, for anglers, are still around.

The Cape May Lady also was able to get out and get involved with the delayed opening of sea bass season. They reported, “OK fishing,” with “most” of their patrons limiting out. They also had some triggerfish to add to the cooler. Additionally, they reported that the water was still warm.

Stalker Fishing Charters reports “very good” backwater fishing for striped bass, but there has been “the occasional off-trip." Outings have seen 40 stripers to 31-inches, while most trips are seeing about 20 fish being landed.

The best action has occurred on top water, swimming plugs and rubber baits. Give Capt. Skip a call at (609) 972-5218 to book a trip and get in on the action.

The Starfish, sailing from Sea Isle, recorded a nice day when they opened Oct. 13. They followed their opening with another “good fishing day” on the holiday.

Sea Isle Bait and Tackle has been busy, with word of plenty of action, particularly in the back and from the surf and inlets. One angler, Drew, reported solid bass, with two being keepers. He caught his fish on live Spot.

Others, like the nine caught by CJ Walsh and a friend, hit both baits and lures. John caught his keeper from the Monday morning surf. Lisa and Kim had fun while fishing from the beach at Townsends Inlet. The caught “plenty” of 1 to 3-pound bluefish, plus some flounder which were released.

Whale Creek Marina recorded two nice keeper striped bass, with one of them measuring 31-inches and weighing 16-pounds. This fish fell for a live spot. No anglers were identified.

Sailors Delight Back Bay Fishing is fishing the backwaters, and has been catching plenty of “cocktail blues." They are also looking for stripers that are inside the inlets and cruising near the sod banks. They are setting up trips, so give them a call at (609) 827-8309 to see when the next trip is.

From what was reported this week, it seems that the beaches and the back bays near the inlets are the hot areas. Baits, such as Spot, are producing nice stripers, while lures and soft plastics are also worth throwing.

Stripers and bluefish are patrolling those areas, and are more than willing to take offerings from any angler who will put in the time. Remember, you're not going to catch anything while sitting at home. Grab your pole, or poles, grab some bait at your local tackle shop, and set up at your spot of choice.

Don’t forget, sea bass fishing is now legal, so you may also want to jump on a boat and head out to the ocean with your favorite captain. If the ocean is not your top choice, the back bay boats are also available for bluefish, weakfish, and stripers.

Finally, tog fishing is picking up at the local rock pile and bridges.

You have plenty of choices, so good luck if you get out.