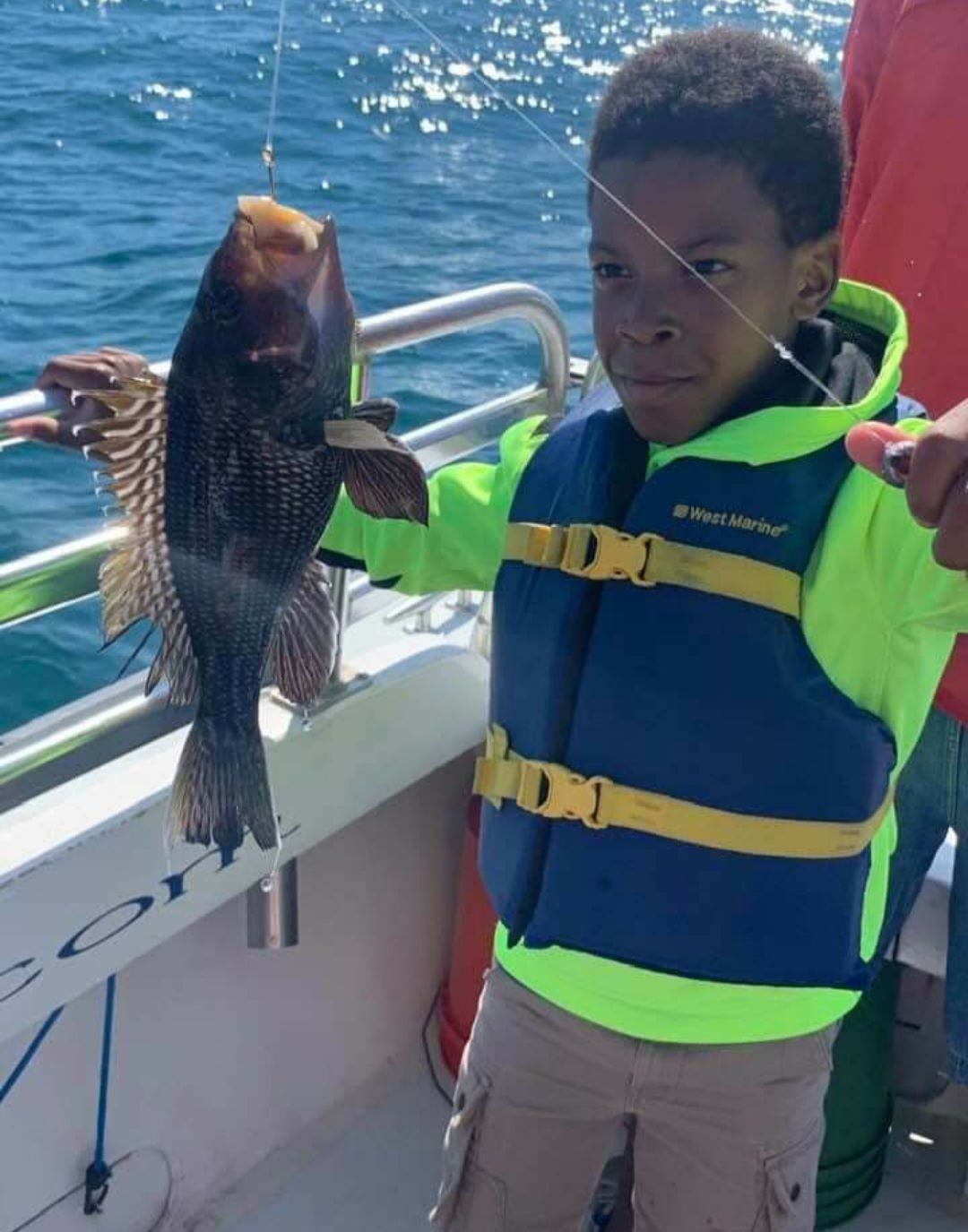 A nice sea bass for this young angler. 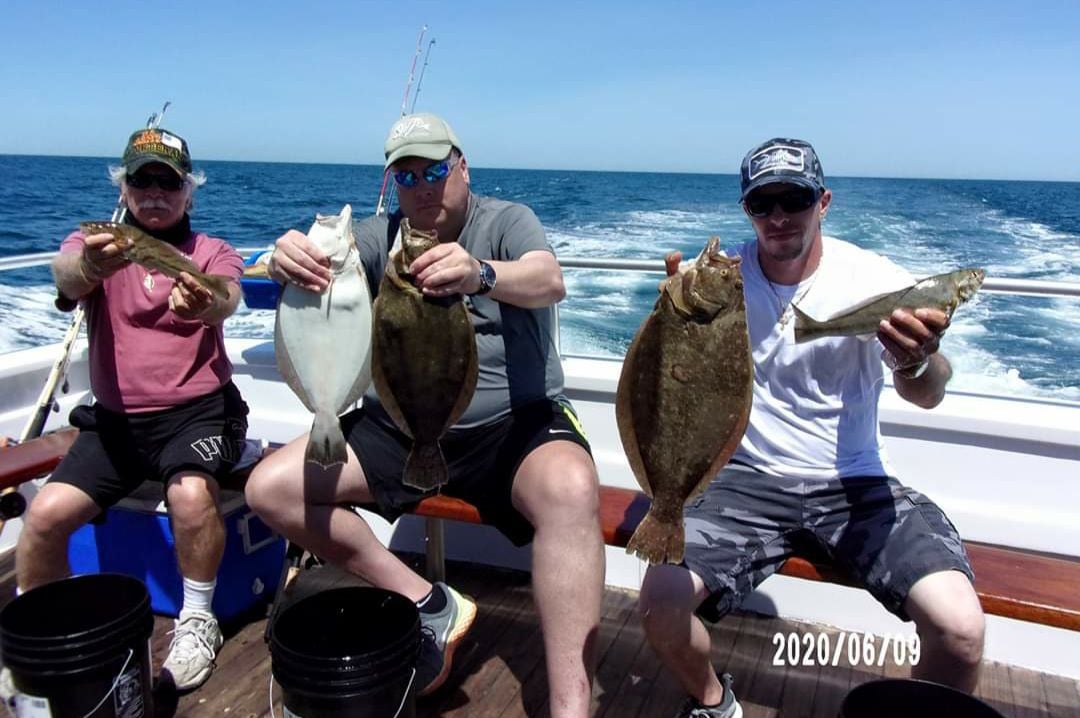 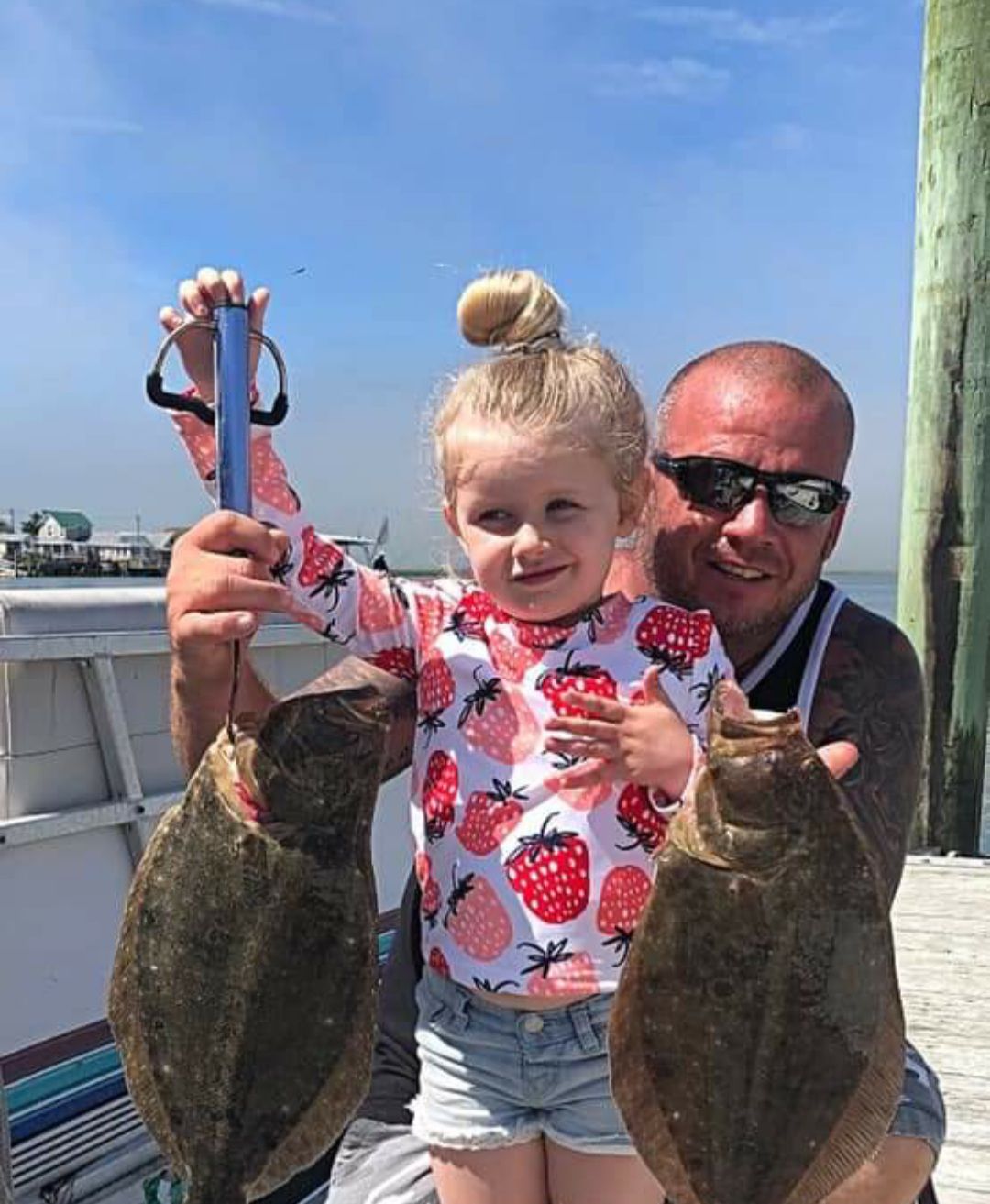 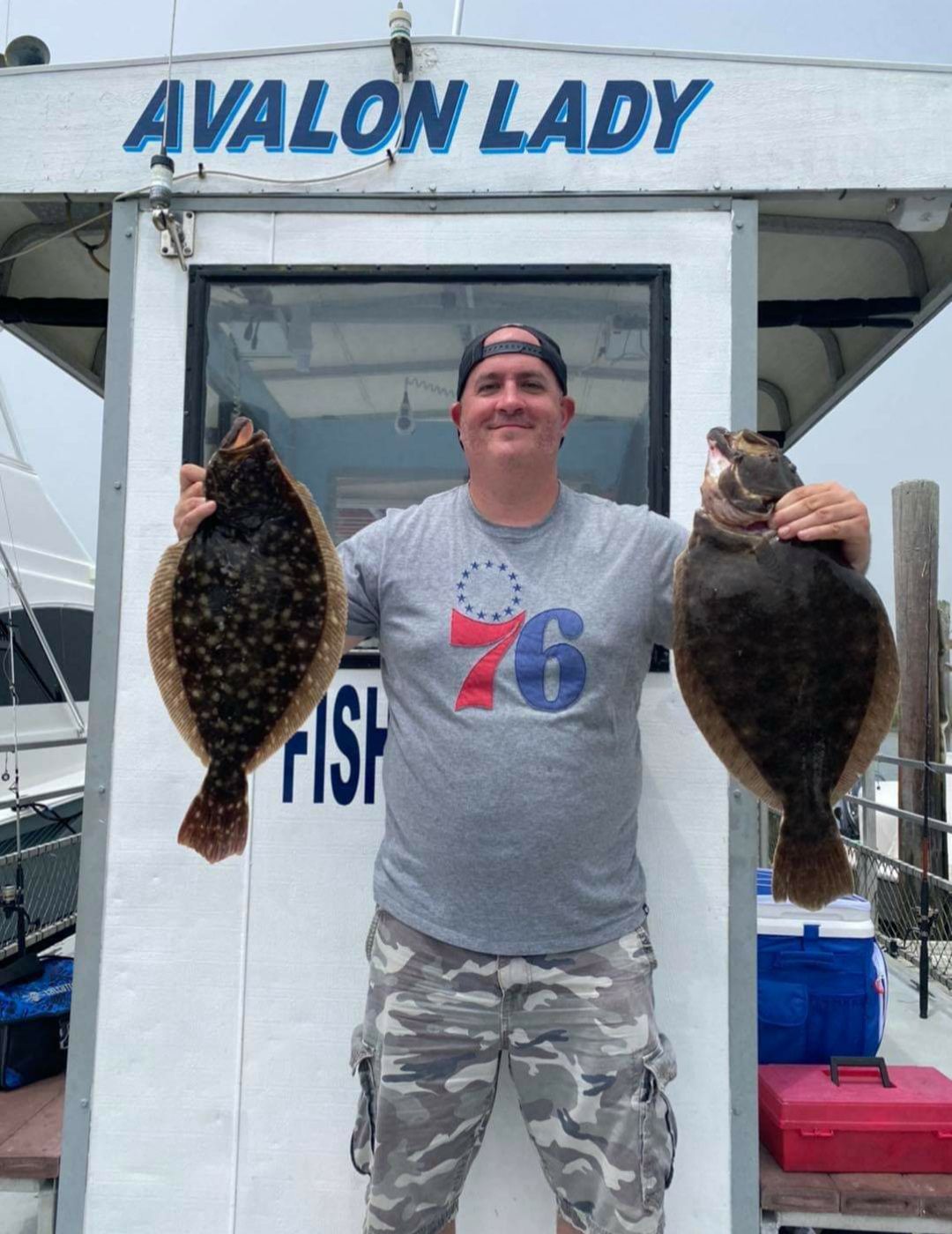 The 5.87-pound flounder (right), plus another keeper for this angler.

The nice weather led to some good fish early in the weekend, but the windy conditions that followed slowed the action and left some boats sitting at their berths.

The early part of the following week was slow due to the weather, but the fishing community moves on, and there is a flounder tournament this weekend that you may want to get into if your schedule allows.

Let's get to the report.

The Porgy IV is fishing for flounder and scored the biggest one I have heard of so far this year. Brian Pichalsky won the June 13 pool with his 8-pounder. That day had a fast drift that wasn’t a problem for Brian.

Earlier daily pools in the week went to Ken Minett and Bob Brett, who both won with 23-inch fish. Several limits were also achieved during the week by multiple anglers.

Since capacity restrictions are creating limited seating options for anglers, Capt. Chuck recommends that tickets be purchased on the website. Walk-ons are still welcome, but seating is limited, so you must arrive early. The area's headboats are emphasizing that you arrive early to increase your chances of getting a seat. Use that advice wisely.

Their marina mate, the Miss Chris, with Capt. Mike and Capt. Bob, is back and ready to go. They are fishing two four-hour trips daily, leaving the dock at 8 a.m. and 1 p.m. She is primed and ready to sail.

Cape Queen Sportfishing Charters had the Mike Troupe family out for a sea bass trip, which ended with plenty of tasty fillets for the table. They have also started their bay shark trips, and the Bob Burger party claimed the first of the season. The sharks were ready, too, as they were hungry and biting. Four were caught and released during the four-hour trip.

Full Ahead Sportfishing, with Capt. Bob, and Fishin’ Fever Sportfishing Charters, with Capt. Tom, both out of Utsch’s Marina, are running for a variety of species. Sea bass, flounder, drumfish, tilefish and tuna outings are available for charters. Check them out for your six-pack trips.

Hands Too Bait and Tackle reported that Mark Wrzesinski grabbed some bait and proceeded to hook up with a nice flounder, while Mickey Crouse stopped in with a 7-pound weakfish he caught on jumbo bloodworms. He was fishing off of a local rock pile.

Also mentioned was the six yellowfin tuna that were caught by anglers aboard the American Honey. They also fought a big eye tuna, had him 50 yards down, but then he pulled the hook. They fought the fish for over an hour.

Cape May Bait and Tackle reports brown sharks off the Cape May beaches, while weakfish are also along the beaches, plus the local rock piles. Boaters can get them off of Cape May Point. Soft plastics or bloodworms would be your bait of choice for those fish.

Some drumfish remain in the bay, but the bite is dwindling as the water temperature rises. Finally, flounder and sea bass are reported at the local reefs.

Off The Hook Bait and Tackle weighed in a 4.07-pound weakfish for anglers Steve and Ray. The weakfish bite has improved over the last week.

Capt. Al, on the Bayhound, is running trips for sea bass and flounder. Some ling are also being caught during sea bass trips. During one recent outing, they saw an ocean sunfish, also known as a common mola, and were surprised when they reeled in a small great white shark. It was immediately released at the boatside. It would have been thrilling to see that on the hook.

The Starfish is targeting sea bass. These trips have also been producing ling for their patrons. People have been leaving with fresh fish for dinner, which is always great to hear.

The Miss Avalon frequently heard “fish on” recently, as they are sailing daily for sea bass and flounder. As with the other boats, they have also caught ling and kingfish.

They ask that you arrive at least 45 minutes before the scheduled departure time. They sail at 8 a.m. and 1 p.m., as their schedule is expanding.

Their dockmate, the Avalon Lady, is sailing the back bays for flounder. They have been bringing in some nice keepers recently, highlighted by a 5.87-pound, 26.5 inch flounder caught June 18 as the gloomy conditions were lifting. During the previous weekend, they had another angler who caught a 5.37-pounder. Both boats are also running private fishing charters for businesses or birthdays and sunset charters and private non-fishing outings.

Boulevard Bait and Tackle reports that some kingfish are being caught off the Sea Isle City beaches. Youngsters Rocco and Vinny caught their first kingfish. They’re fun to catch and taste great.

Flounder action remained solid, as Jim caught a fast limit, about one hour, as he got his boat out for the first time this season. Young angler Theodore, while fishing with his dad, landed a 24-inch “beauty."

Sea Isle Bait and Tackle also had several young anglers stop in with their flounder catches. Big Jack weighed a 2.85-pounder, while Billy D. stopped in to weigh his 3.55-pounder.

Avalon Hodge Podge had nice tuna weighed recently for the Avalon Invitational. Mark Baer had three yellowfin that went 36.6, 31.2 and 29.8 pounds. Four more (no weights provided) were caught by the crew of the Electric Current, captained by Larry DeFonte. Finally, the crew of the Rakfin checked in. Their three heaviest of four totaled 132.8 pounds.

Fins and Feathers checked in to the Hodge Podge to report that their crew had four keeper flounder, ranging from 19 to 21 inches.

Don’t forget, the Grassy Sound Marina Flounder Tournament is June 27. The official tournament start time is 7:30 a.m. Be at the marina early, as tournament bags will be distributed at 7 a.m. Bags contain items pertinent to your day at the tournament. If you get in, have fun and good luck.

They also reported that 4-year-old Regan McHugh caught a double-header of keeper flounder. She caught them on minnows while fishing in the channel near the marina.

It’s a little farther out, but another tournament to remember is the 27th Annual Duke of Fluke Tournament at Sterling Harbor Bait and Tackle, which will be held July 18. More information will follow as we get closer.