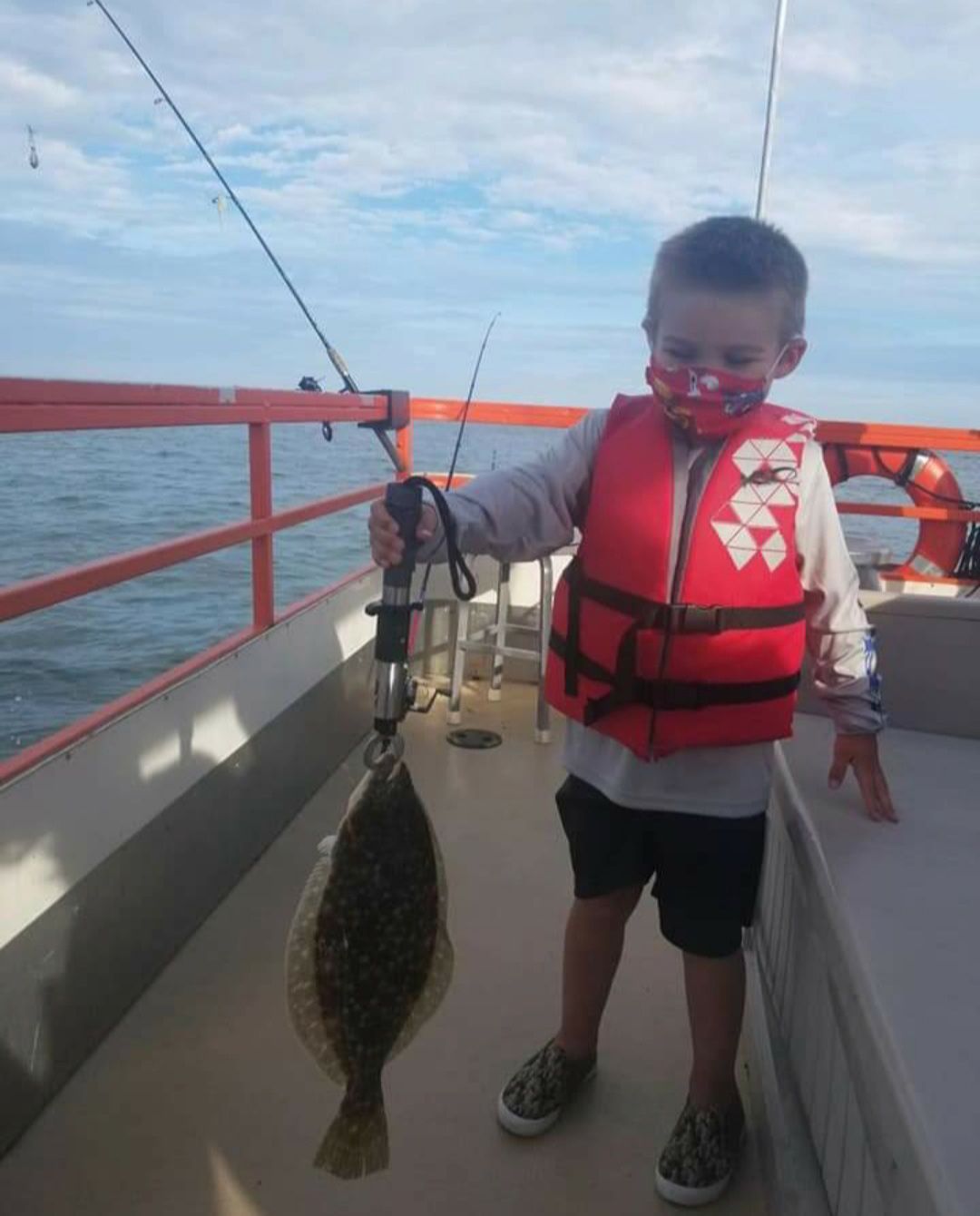 A happy youngster with his flounder. 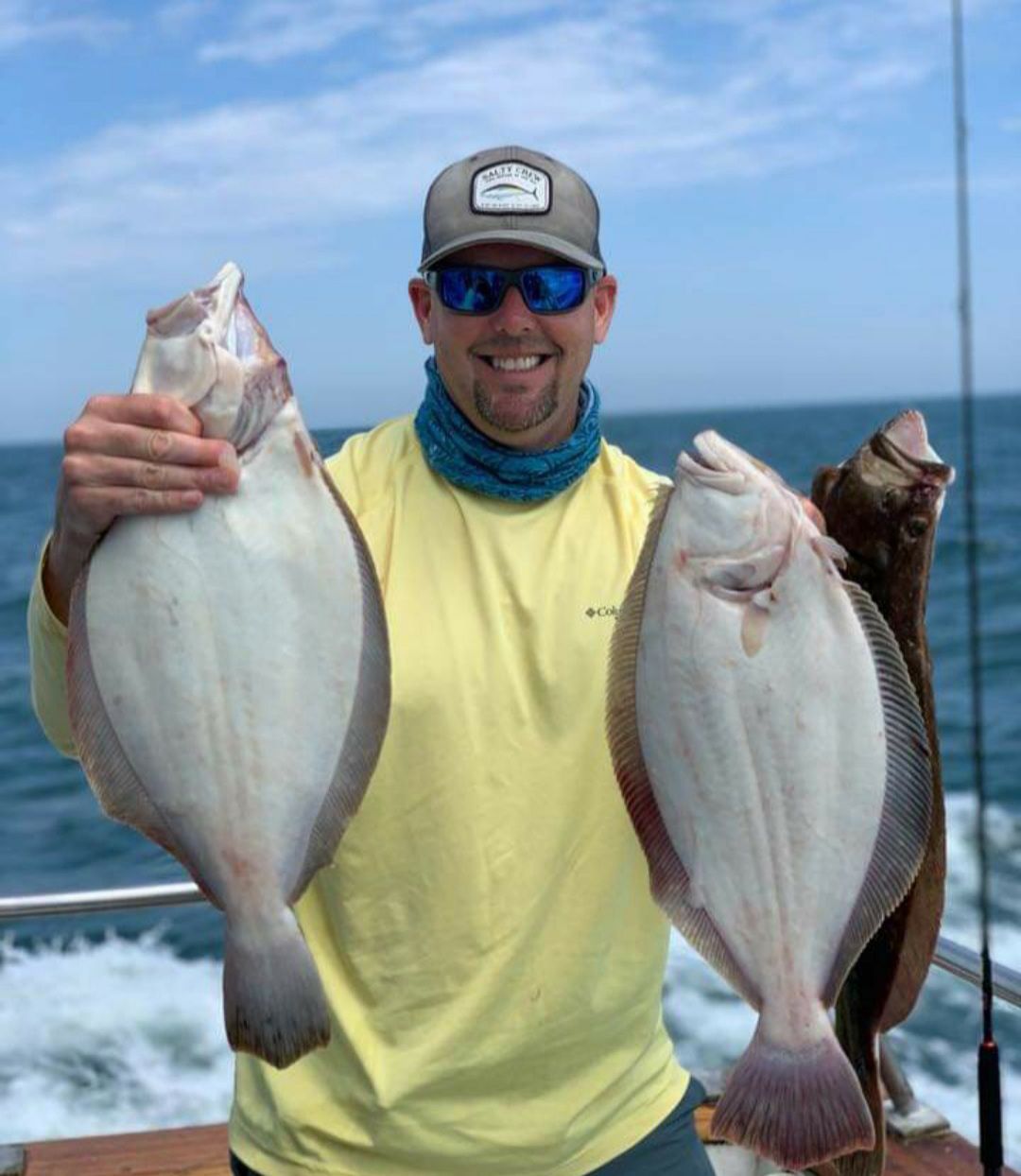 Joe Landis with his limit. 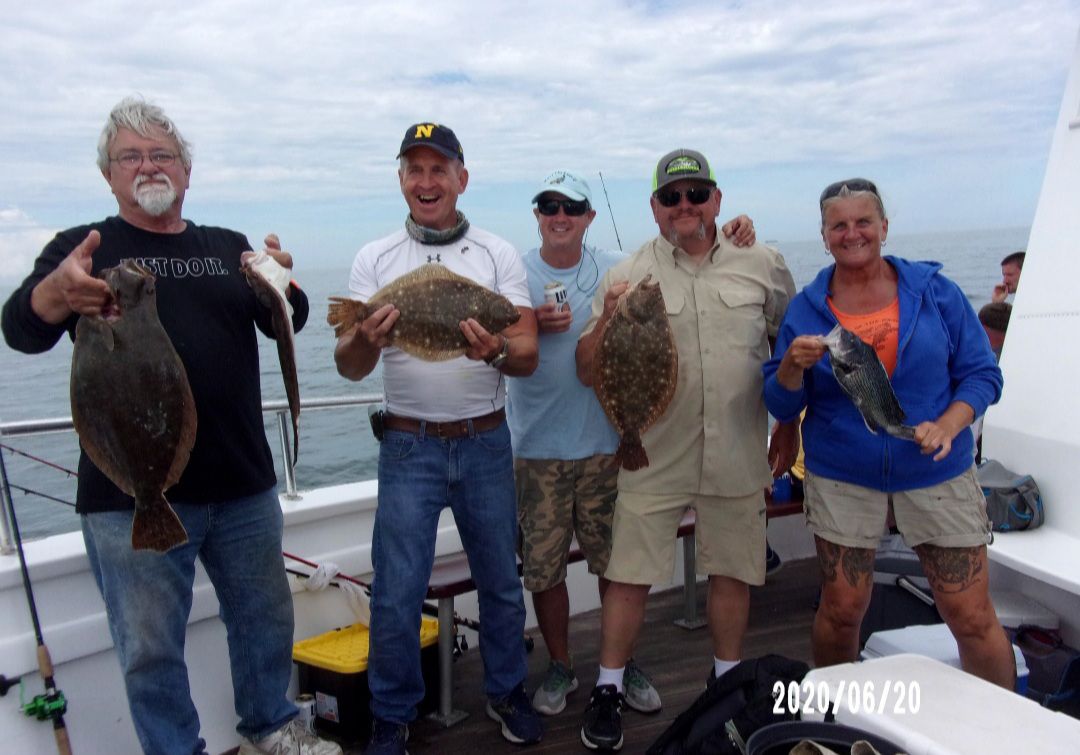 Happy anglers with their catch. 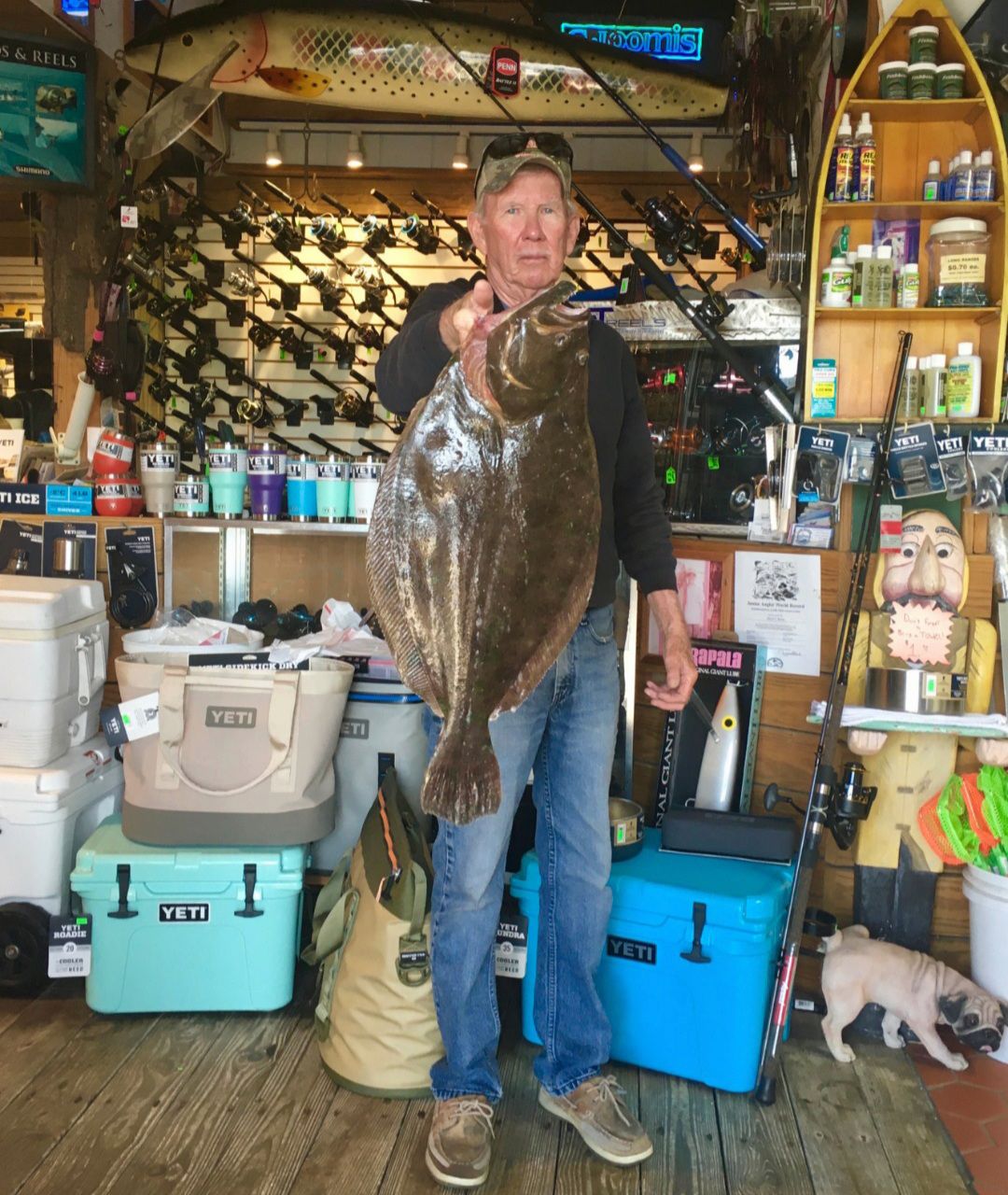 Ralph Shaw and his 6.73-pound flounder.

The nice weekend was what we needed. It brought out the anglers and, more importantly, the fish.

The summer variety is kicking in nicely, which makes for a more enjoyable day on the water. Let's check out what happened.

An interesting fact occurred when an angler, Steve, caught his limit on a recent trip. From the time the first keeper came over the rail to the moment the third legal flounder went into the cooler, 10 minutes passed. It’s now the new record for the fastest three keepers caught on the Miss Avalon.

The summer schedule is now in effect, which means two daily trips that leave the dock at 8 a.m. and 1 p.m. Lady anglers can sail for half-price on the Monday and Friday afternoons. It also means that dolphin cruises will be held on Tuesday and Thursday evenings.

The Avalon Lady was busy recently. A Friday and Saturday trip produced 86 and 116 short flounder, respectively, while nine and 12 keepers were caught on those days. Saturday's fish included some respectable-sized catches.

The good back bay fishing continued as the week progressed. June 22 produced four keepers, while June 23 had 11 keepers and 115 short flounder.

The Avalon Lady started running their crabbing trips recently. It’s a nice change of pace if you're looking for something different to do in the afternoon. They will also be running nighttime fishing trips, which are a nice way to unwind after work.

The Starfish was out and putting a hurting on the sea bass, as were other boats, as the spring season for these fish ended. They also caught plenty of ling on those trips. Flounder is now a primary target for their patrons.

Avalon Hodge Podge was busy, as they weighed a 126-pound bigeye tuna for Chris Carr, caught from the Four of a Kind, and two hefty bigeye tuna for the crew of the Endorfin. Those fish weighed over 200 pounds each. They also weighed a 5-pound weakfish for Cassidy, who caught it near the Eighth Street Jetty. A white paddle tail did the trick.

Boulevard Bait and Tackle reports that the local reefs are on fire. Plenty of flounder are being caught there, as an angler named Frank and his crew proved - 20 keepers during their last three outings proves that.

The beach proved to be a great spot for Kevin, as he came in with a 19.5-inch keeper. The best catch though went to Ted, whose flounder weighed 5.6 pounds.

Sea Isle Bait and Tackle reports that kingfish have appeared in the surf and that they are ready to get you what you need to catch them. They also had a great tuna report from Playmaker Fishing. Capt. Scott and the crew returned with two large bigeyes and two yellowfin.

The Sailor’s Delight had great trips during all three of their daily outings. Flounder, bluefish and weakfish cleared the railing, which kept the anglers happy and busy. The fish seem to be hitting any time of the day. The high tide was best, but even the low tide produced fish, as angler "Big Tom" learned during a recent outing.

The Cape May Lady is sailing daily at 8 a.m. for flounder. Some weakfish and kingfish may also be caught on these trips. They report solid action and that some of their patrons have caught their limit. They are also running offshore trips for tilefish, so call ahead to see what is on their schedule.

Cathy, from Sterling Harbor Bait and Tackle, reports “excellent” flounder fishing from the back bays and reefs. Two highlights were a 6.73-pound flounder, caught by Ralph Shaw, and a four-man limit, caught by Scott Wheeler and friends.

Weakfish can still be caught from the rock piles around the area. They are hitting bloodworms or bucktails that have been tipped with rubber baits.

The tuna bite around the Baltimore Canyon, particularly while trolling, was “good” for bigeyes and yellowfins.

Grassy Sound Marina is staying busy, with anglers catching fish from the pier and their rental boats. They are reporting plenty of nice flounder. Adriana Allen caught a 21-inch flounder in Drum Thorofare while using New Penny Gulp.

The Cape Queen finished their sea bass trips while increasing their focus on their bay shark outings. The Natelli, Kostiou and Castello groups all enjoyed recent outings. Call them, at (609) 884-0001, for upcoming fishing trips and outings.

The Porgy IV had their share of success recently during their flounder trips. Pools were won by Mike Youcis, Scott Michener, Les Lawler and Mike Wolf. Scott’s winner weighed 5.5 pounds and was part of his limit for the day. Mike’s was also 5.5 pounds. Crystal Glass also caught a nice keeper, while limits went to Tom Formisano, Marty Overline, Joe Landis and Carl Davis.

The Sea Star III was busy during the week. The wind early in the week kept them down in the Point area, where they caught weakfish and kingfish. As the weather settled, they returned to the local reefs and caught sea bass and flounder.

One day was excellent, as an angler caught a 5.5-pound flounder that would normally win the daily pool, but it was beaten when Wayne Ryan won that day with a 6.4-pound flounder. Other pool-winners (all flounder) were Nate Schaeffer (3.7 pounds), Rich Jablonski (3.9), and Frank Servocky (3.65). “All in all,” it was a great week.

The Miss Chris, with Capt. Mike, is sailing daily trips at 8 a.m. and 1 p.m. They were loaded with kingfish during their recent trips. Flounder, weakfish, bluefish and more kingfish await your arrival.

Cape May Bait and Tackle reported that Tom Oshinsky stopped in to grab bloodworms, then proceeded to catch a nice striped bass. They also reported that the reefs are providing nice keeper flounder.

The Miss Jax crew also weighed in some nice tuna, consisting of two bigeyes that weighed 145 and 155 pounds.

Remember to grab the “Do The Shore” free magazine where you get your Herald. Extra photos may be printed in that edition.

The fish are here. Get out there, good luck, and I’ll see you around.