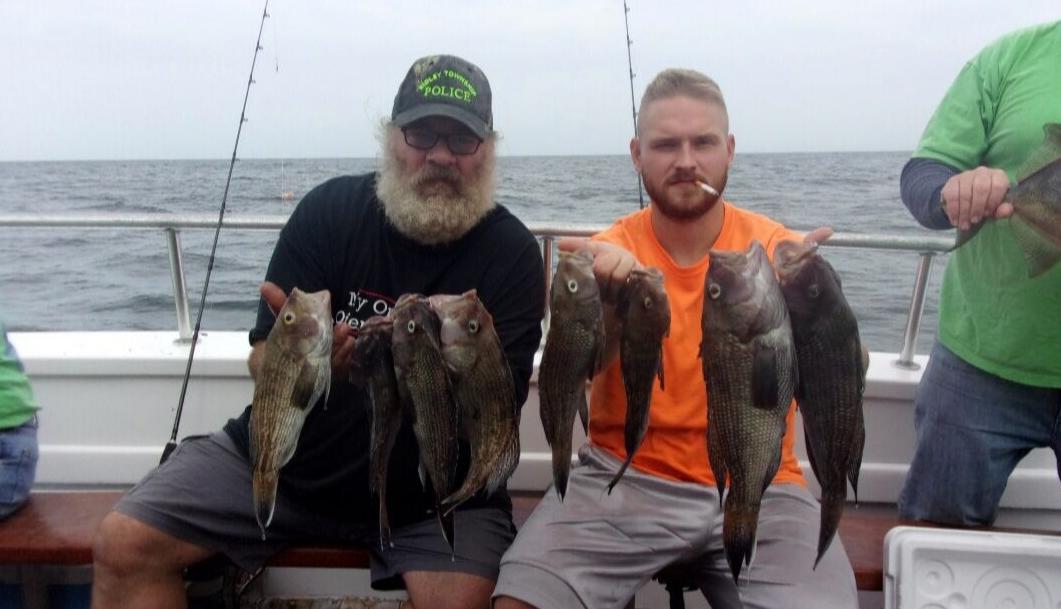 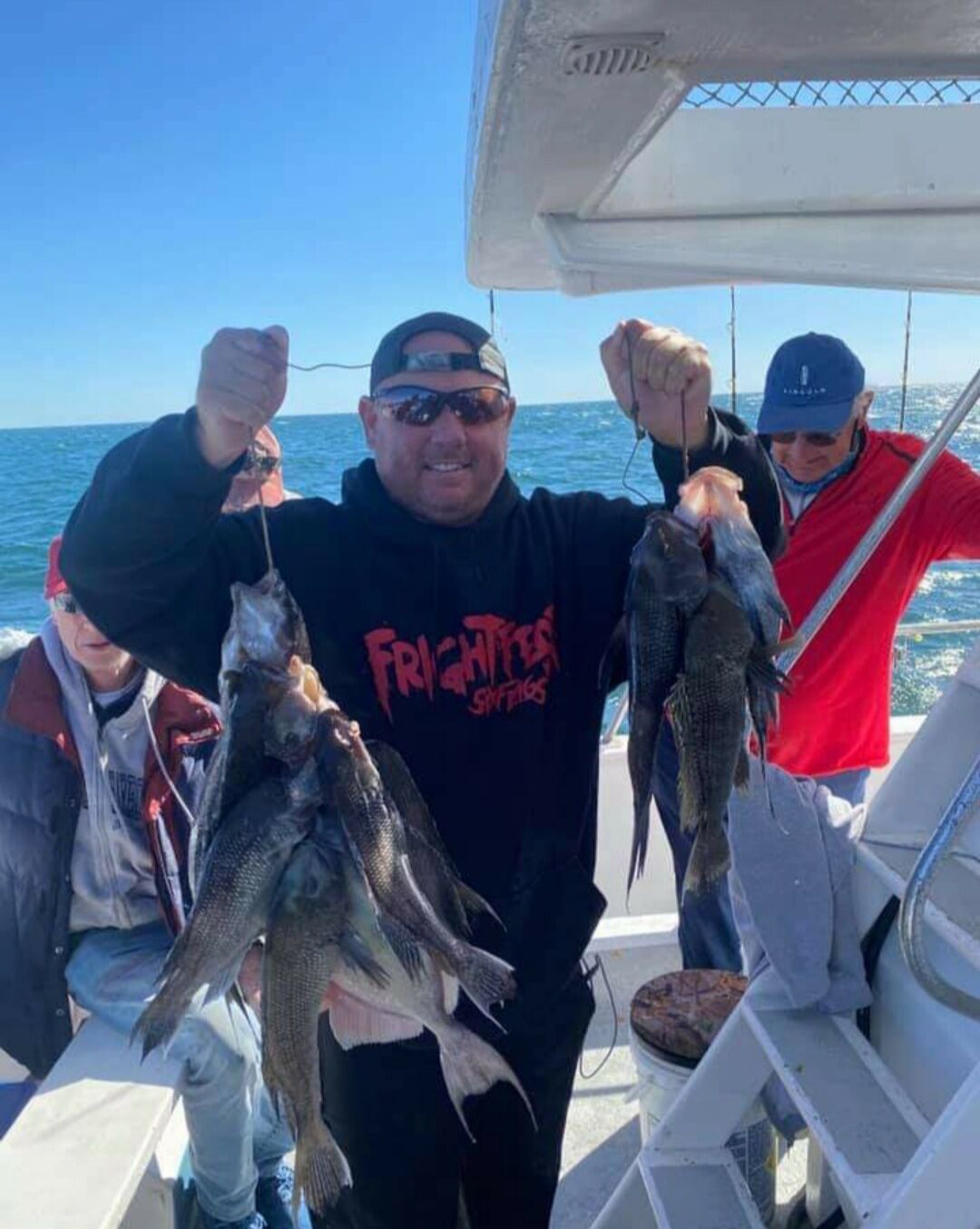 John with his, and his nephew’s, sea bass. 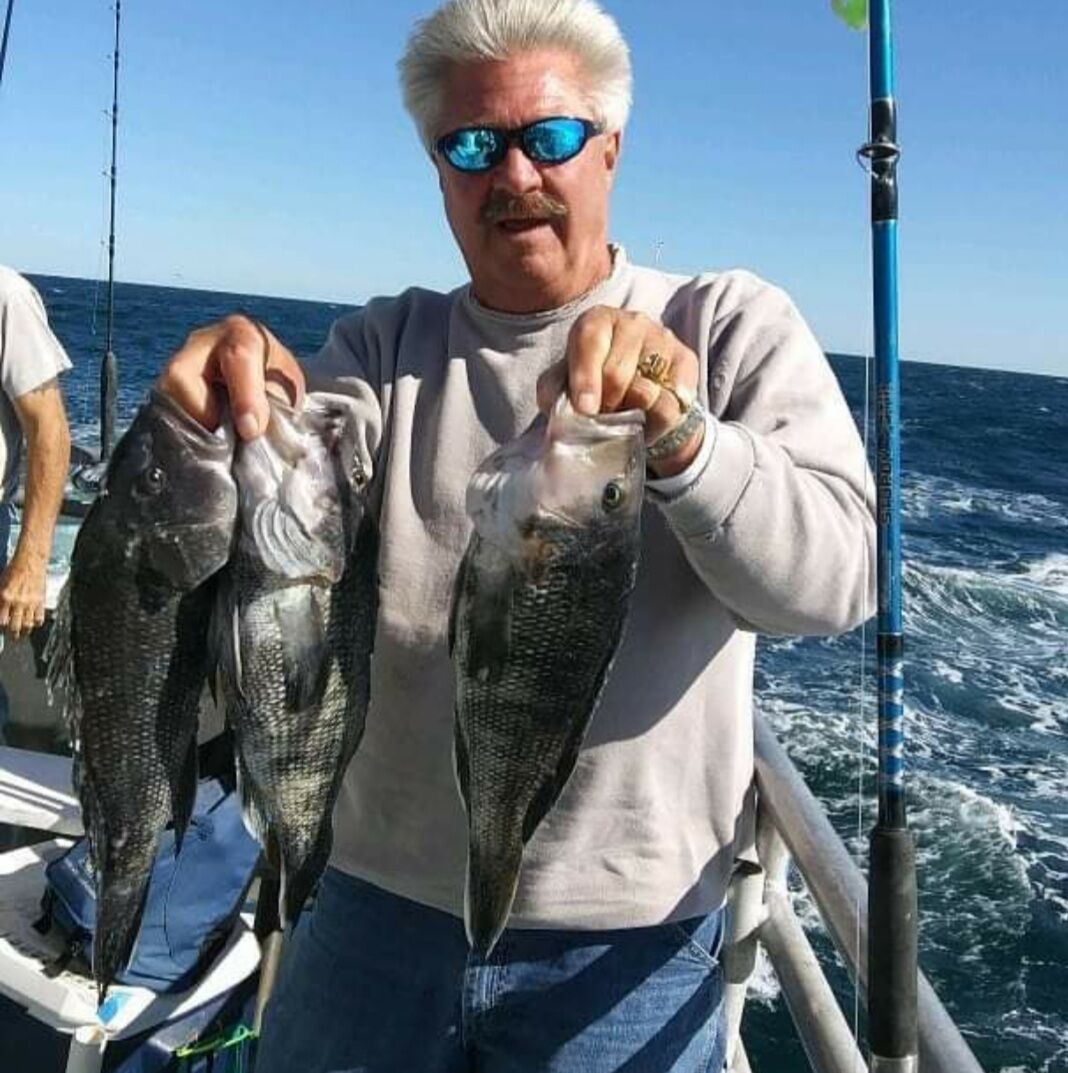 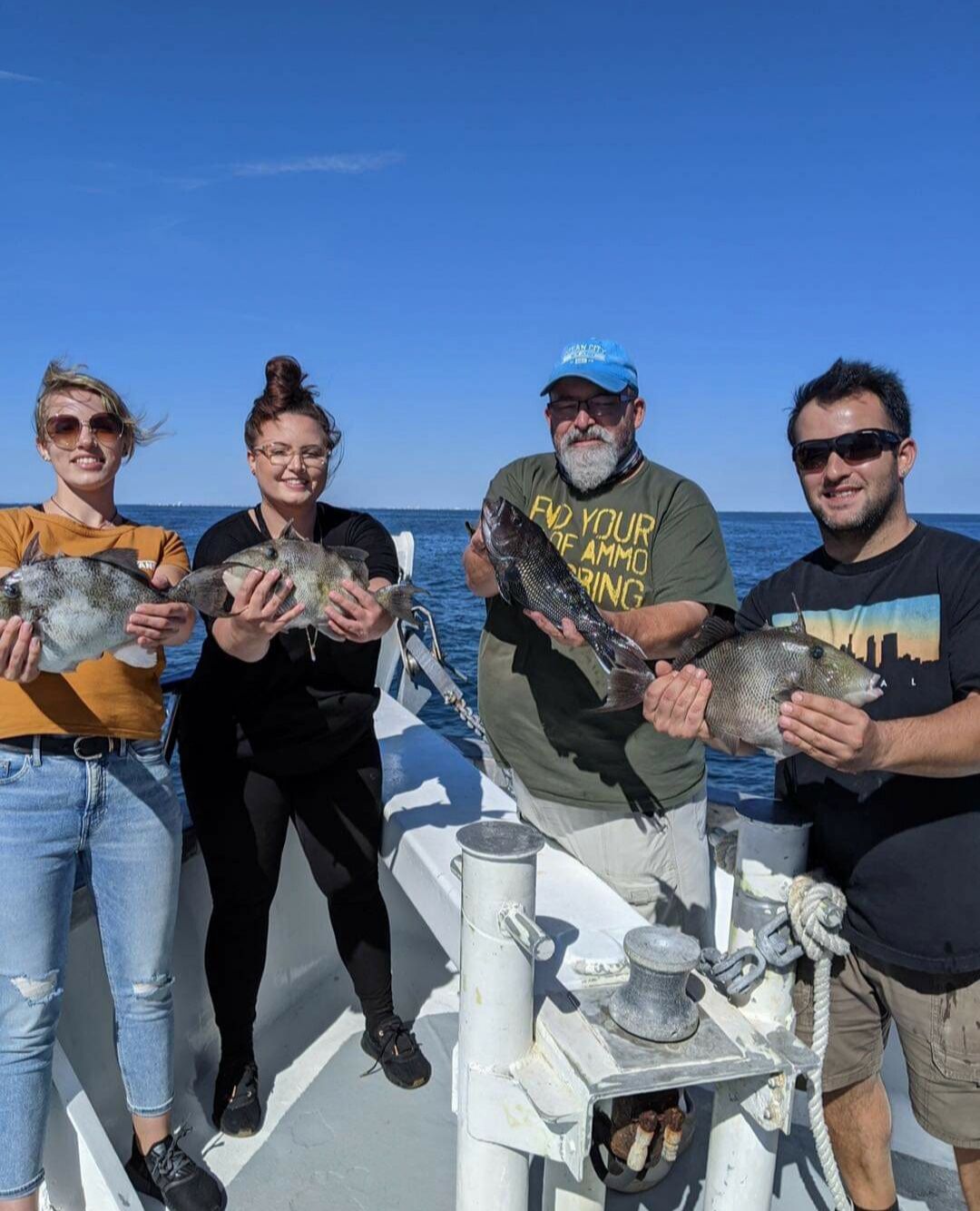 Great fishing for this quartet.

Opening day was productive, and the action continued the following day. The wind and heavy currents arrived on Oct. 10, and Hurricane Delta's reminisce reached us late Oct. 11, continuing into Oct. 12. If you’re following where we’re going, then you can surmise that it made fishing more difficult, but not impossible.

Capt. Chuck, from the Sea Star III, reports that his sea bass season “started out with a bang," meaning four consecutive days of “good action” yielding numerous 10-fish sea bass limits, along with many anglers close to limiting out. Triggerfish, bluefish and porgies were also caught and was described as “fun,” which is a recipe that Capt. Chuck hopes will continue through October - hopefully, it continues into November and blackfish season.

The Porgy IV's great fishing report featured Linda Gilmartin, who caught nice sea bass and completed opening day by winning the pool with a large triggerfish. Other pools went to Karl Zeigler, who won with a 4-pound sea bass that was part of his limit, and Tom Giordano, who caught his limit of sea bass, which included a 3-pound winner.

A split-pool went to William Harrison and John Panvini. Also, a mid-week trip produced plenty of action and limits for most anglers. Joann Pettit, one of the limit catchers, ended her day by claiming the pool with a solid, 3-pound sea bass.

The Miss Chris is enjoying prolific fall fishing. Capt. Mike had great days near the shore, with his patrons catching sea bass and tasty triggerfish. They sail daily, so visit the dock for an 8 a.m. trip.

The Miss Avalon also underwent a great opening day, following it with a productive Oct. 9, which accrued over 100 keepers joined by triggerfish. Oct. 10 saw some of those tough conditions previously discussed, but sea bass, ling and several triggerfish were caught. The Miss Avalon isn’t currently sailing daily, so call ahead to confirm their days on the water.

The Starfish began sea bass season mirroring the same, great-quality results from the area's other boats, and sea bass kept everyone happy. Call ahead, as trips may vary.

The Bayhound, with Capt. Al, has been busy lately, putting charters on sea bass, weakfish, triggerfish, blowfish, bluefish and blackfish. Call Al, at (609) 602-2662, for the days and trips available.

The Cape May Lady ran a combination sea bass, ling trip over opening weekend, reporting plenty of both around the boat. They have the same trip scheduled again, and I’m sure they’ll be running more. Call or text (609) 780-7900 for more information and to make a reservation.

The Sailor’s Delight is hitting the back bays and the intercoastal waterway pursuing sea bass, stripers and kingfish. They are also catching many out-of-season flounder, including one measuring 21 inches.

They are running open-boat trips, as the weather allows, so call ahead to reserve a spot, at (609) 827-8309. They will begin focusing on striped bass by running some exploratory trips while they search for areas where these fish congregate.

No Bones Bait and Tackle reports that crabbing in the back waters is productive. Full bushels being caught are not out of the norm. Fred has boats available to rent and bait to help you catch your fair share of those crabs. If you want to fish while your traps soak, he also has bait for that.

Capt. Skip is hitting the backwater for stripers. Fishing from his skiff in early morning, while it's still dark, has been helpful. Stripers, some up to 33 inches, have been caught recently, and the action has only been getting better. Check out Stalker Fishing for details, or call (609) 972-5218.

Boulevard Bait and Tackle reported a great, early morning catch for John, who hit a local rock pile and was rewarded with a 16.5-inch tog destined for the dinner table.

Fishing when the wind and rain allow isn’t bad. Like anything, you need to put your time in and pay your dues. Some nice fish are being caught, so you just have to get involved.

Good luck if you get out and I’ll see you around.