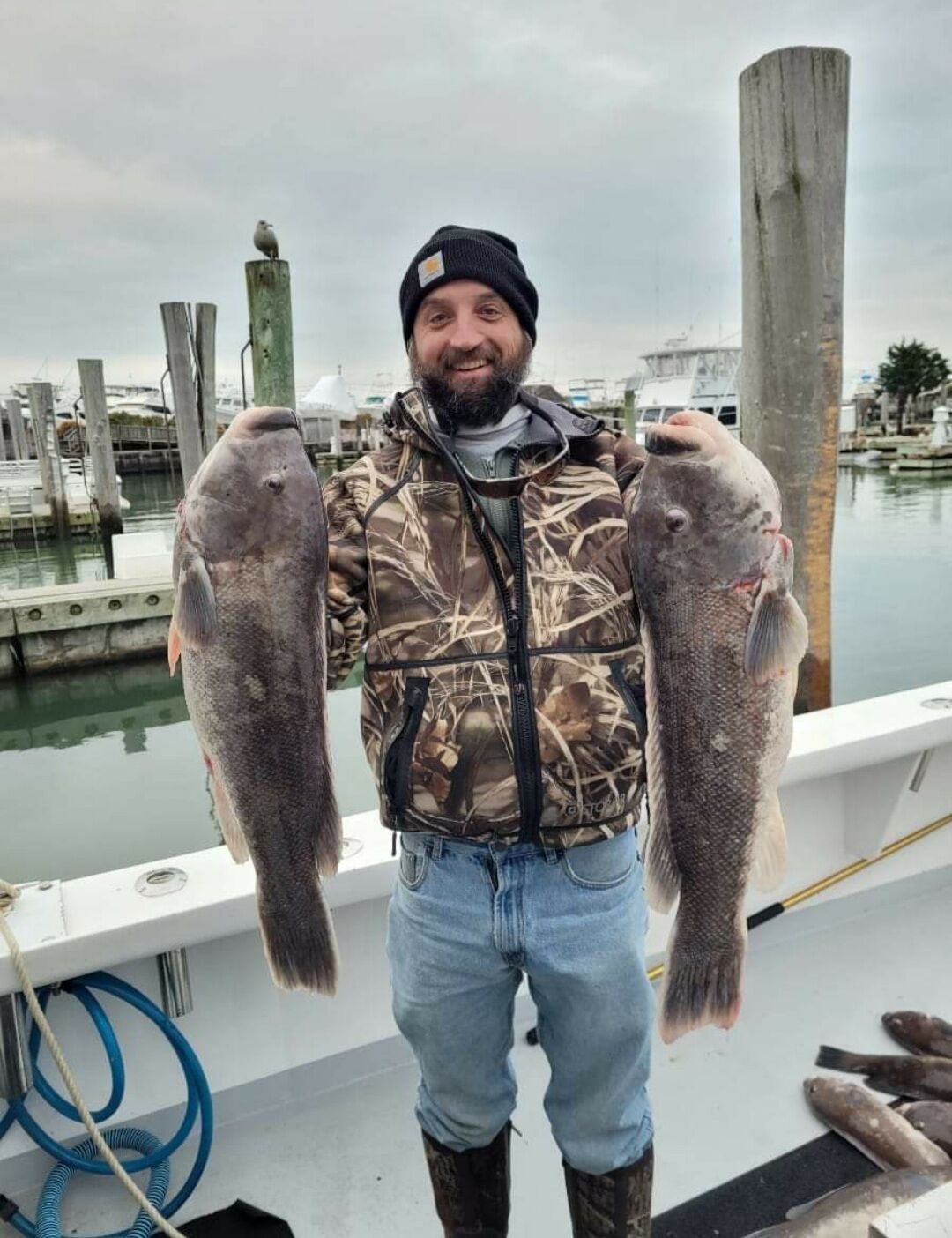 Joshua Piotrowski and two fish, both over 10 pounds. 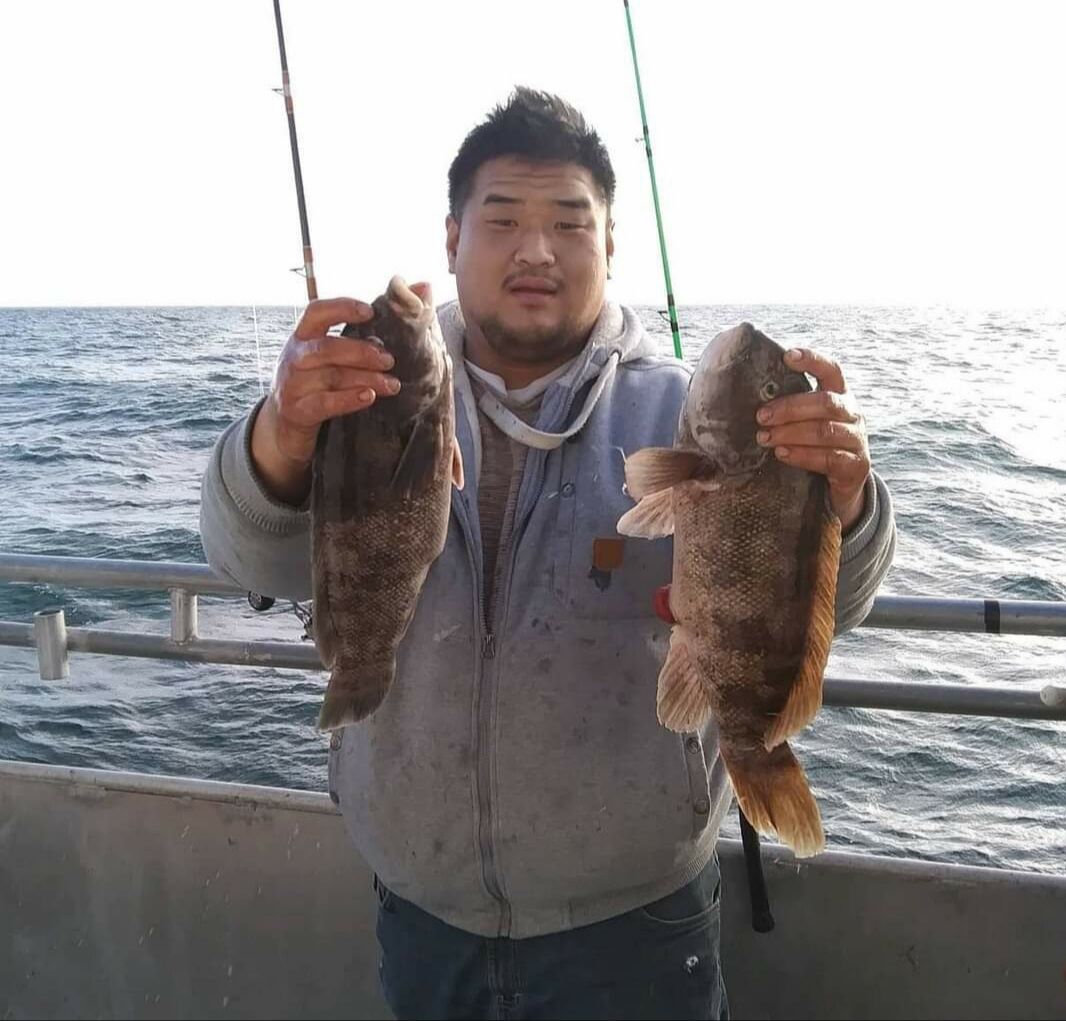 A happy angler and his blackfish. 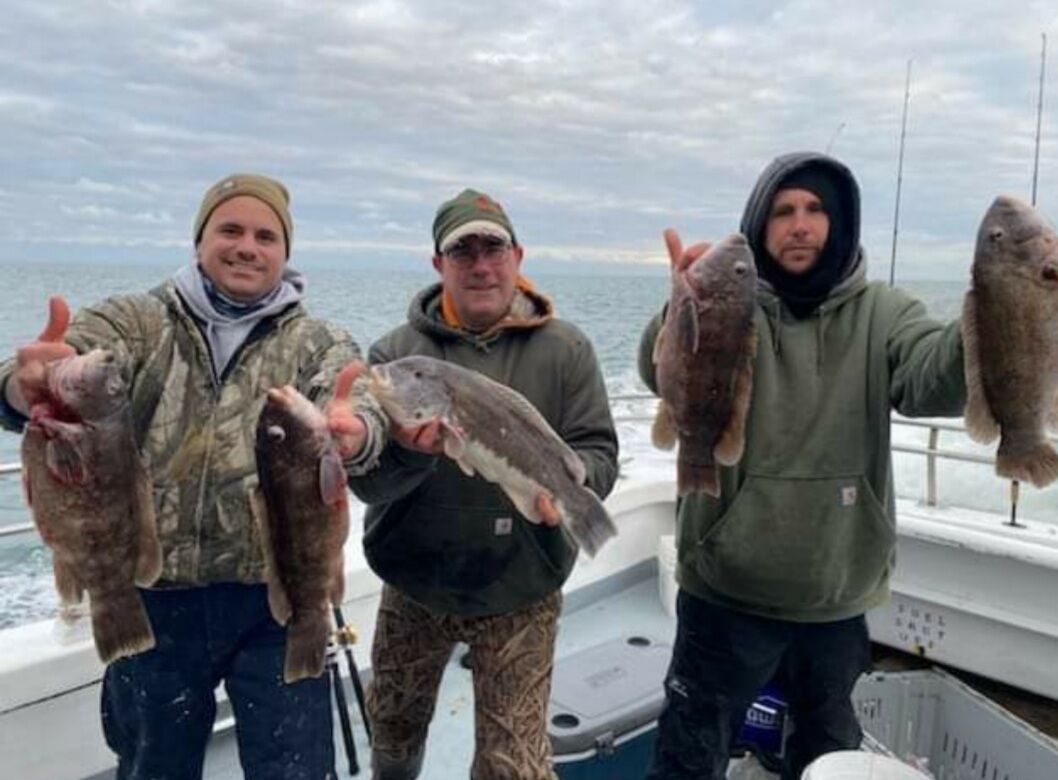 Three anglers and their fish. 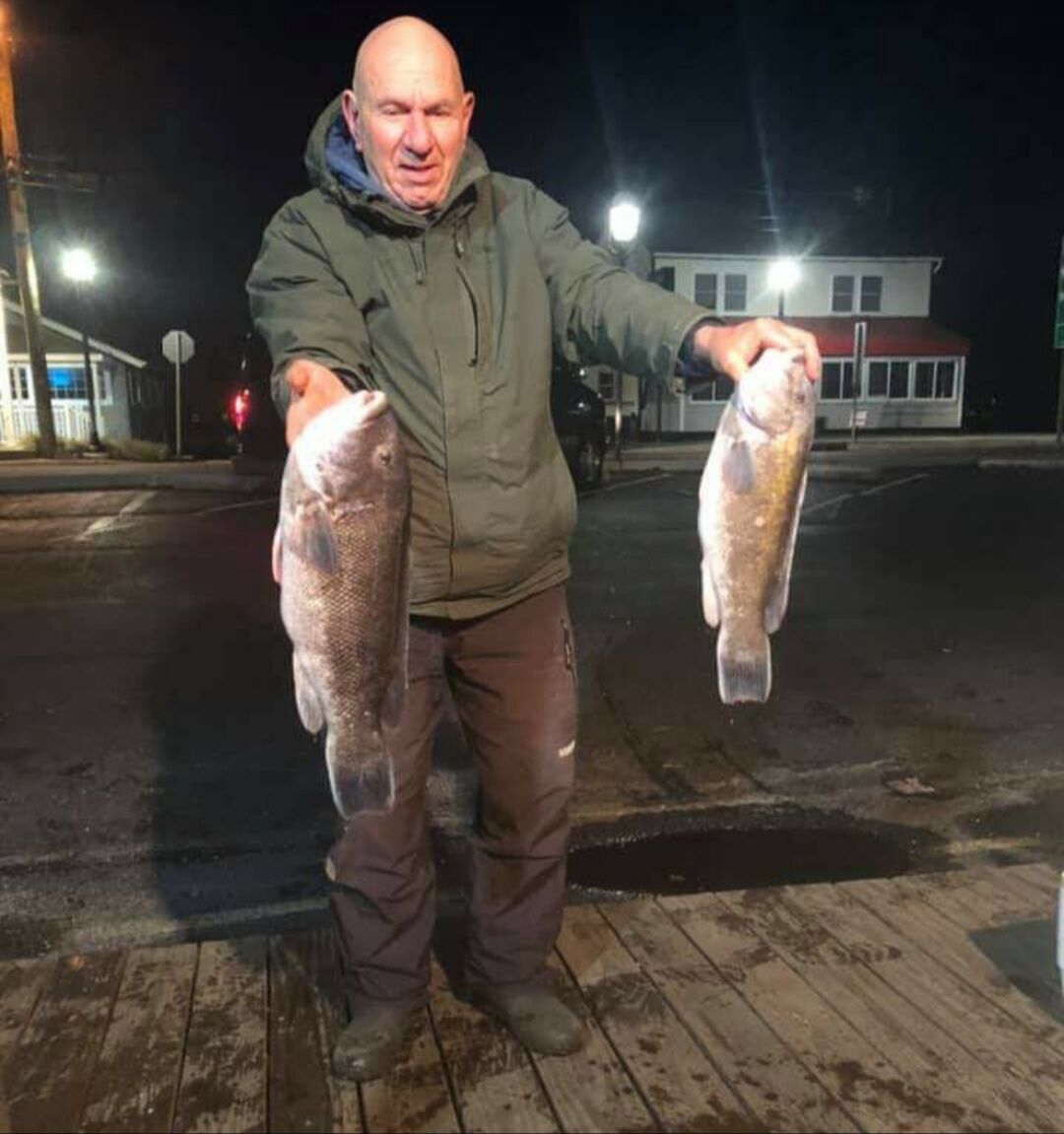 It seems this year is beginning how the last one ended, with another weekend where an unfavorable weather front came through and interrupted everyone's fishing plans.

We accepted the situation, though, and made plans for another day.

Jan. 2 was decent enough for boats to leave the docks and return with fish. Let’s check out what occurred.

Capt. Paul, from the Porgy IV, reported that Jan. 2 conditions were strenuous. The biggest element was that there “was quite a swell” that resulted in a tough pick for most anglers. The rise and fall on the swells made it tough to hold the bottom.

As many know, if you’re not on the bottom, you are not going to catch blackfish. The up and down action also results in many snags on the reef or wreck that is being fished, which causes lost opportunities to catch fish.

Despite the tribulations, three anglers caught their four-fish limit. The legal limit - an important regulation to remember - dropped from five to four with the turn of the calendar.

Pete Adams managed to get two fish, but both were in the 6-to 7-pound range. The largest helped Pete claim the daily pool.

The Jan. 5 trip proved to be a great time for Doug Comparri, who landed two fish, with the biggest weighing 6.5 pounds. Better yet, it proved to be pool-worthy, as it won him the daily contest. Tom Kelly and Stan Youcis both limited out, too.

The Starfish also was out on the ocean Jan. 2 searching for blackfish. They reported “fair” action for the day and were happy the weather was at least cooperative, allowing for a decent catch for their anglers. Totals weren't reported for that day, but from the pictures, the anglers seemed happy. Some, amongst the pictures, were shown with two fish, while one was proudly showing his three-fish catch.

Overall, the day seemed to be considered a success, which is all we can ask.

The Starfish, as of Jan. 8, is scheduled to end their season Jan. 10, so I’m hoping to get a few more reports from them before then.

The Cape May Lady got out on a mid-week trip before the year turned. It was a productive trip, as many catches were spread amongst the anglers. Those who went enjoyed great fishing for the better part of the day.

Due to those great results, many limits were reached. They also went fishing Jan. 6, reporting that the day started slow but the fish later started to chew. Limits were caught, and for a January day, it was still an enjoyable time on the water.

The Fishin’ Fever had a great Jan. 5, which was highlighted by the two, 10-pound blackfish caught by Joshua Piotrowski. One double-digit fish in a day is a nice feat, but two makes it special. Nice job, Joshua.

The Sailor’s Delight is conducting its first online raffle, which the crew is billing as the “Winter 2021 Competition." Raffle tickets can be purchased Jan. 1-March 31, and a random generator will be used to select the winner.

They will be giving away a 10-person charter for a fishing or crabbing outing. The winner decides which trip they want and if they want to go out for three or four hours, which makes it an extraordinary prize.

Admittedly, it was slow, but not without some fish for those who were able and willing to try. It’s cold, conditions are hardly ever what would be described as perfect, but to feel the bite and catch a blackfish is special.

Fishing chances are fewer now, but I wish you good luck if you get out. Take care and I’ll see you around.