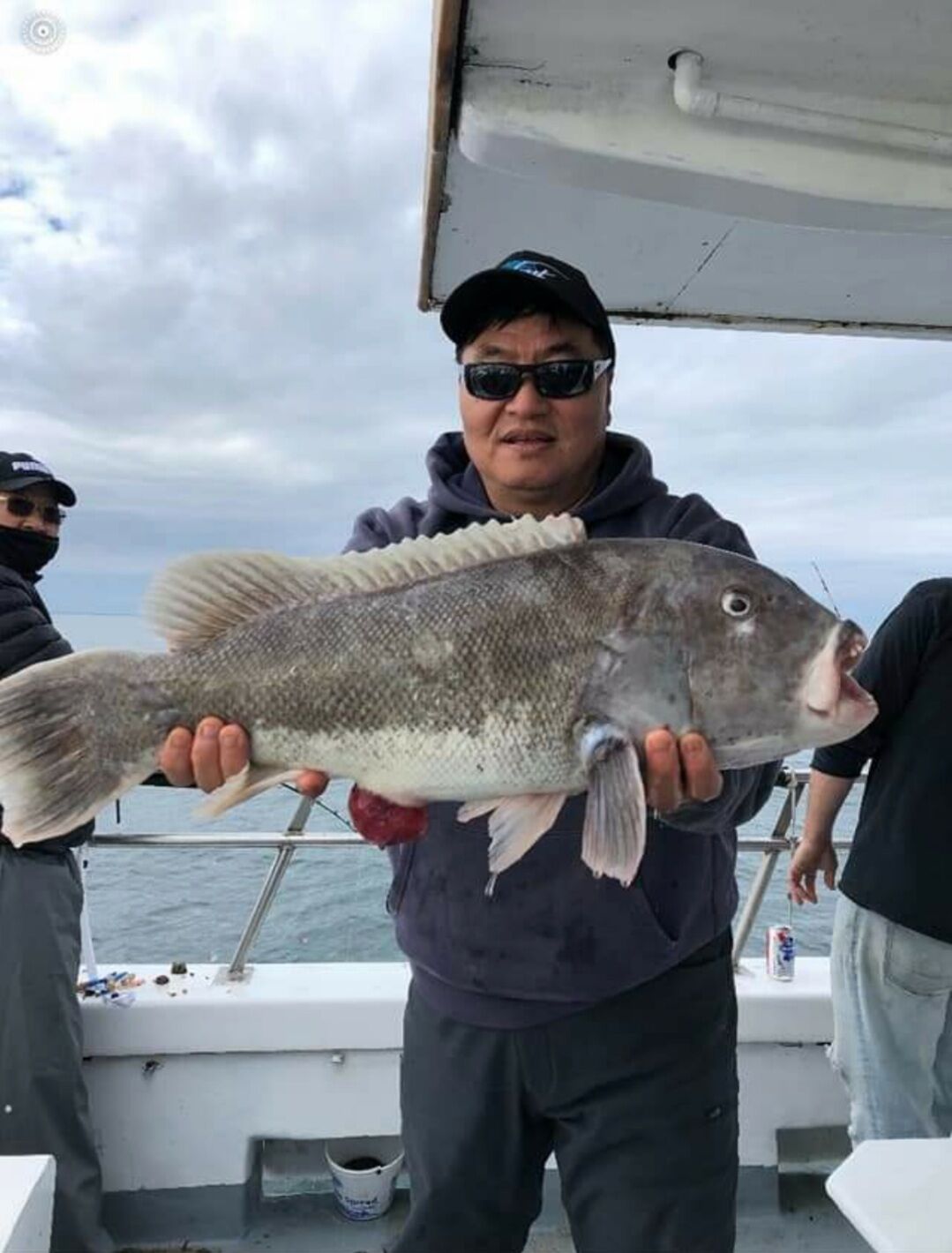 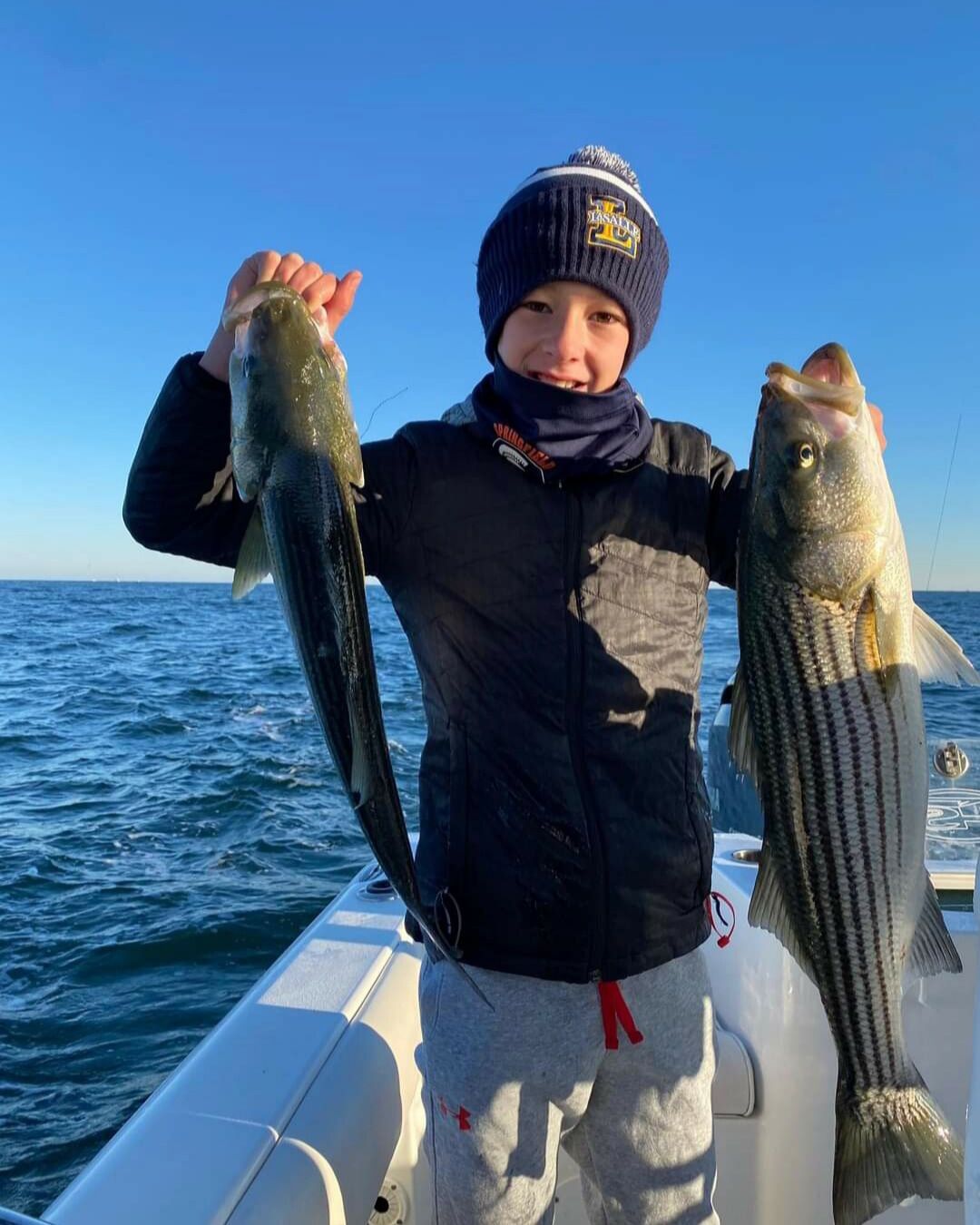 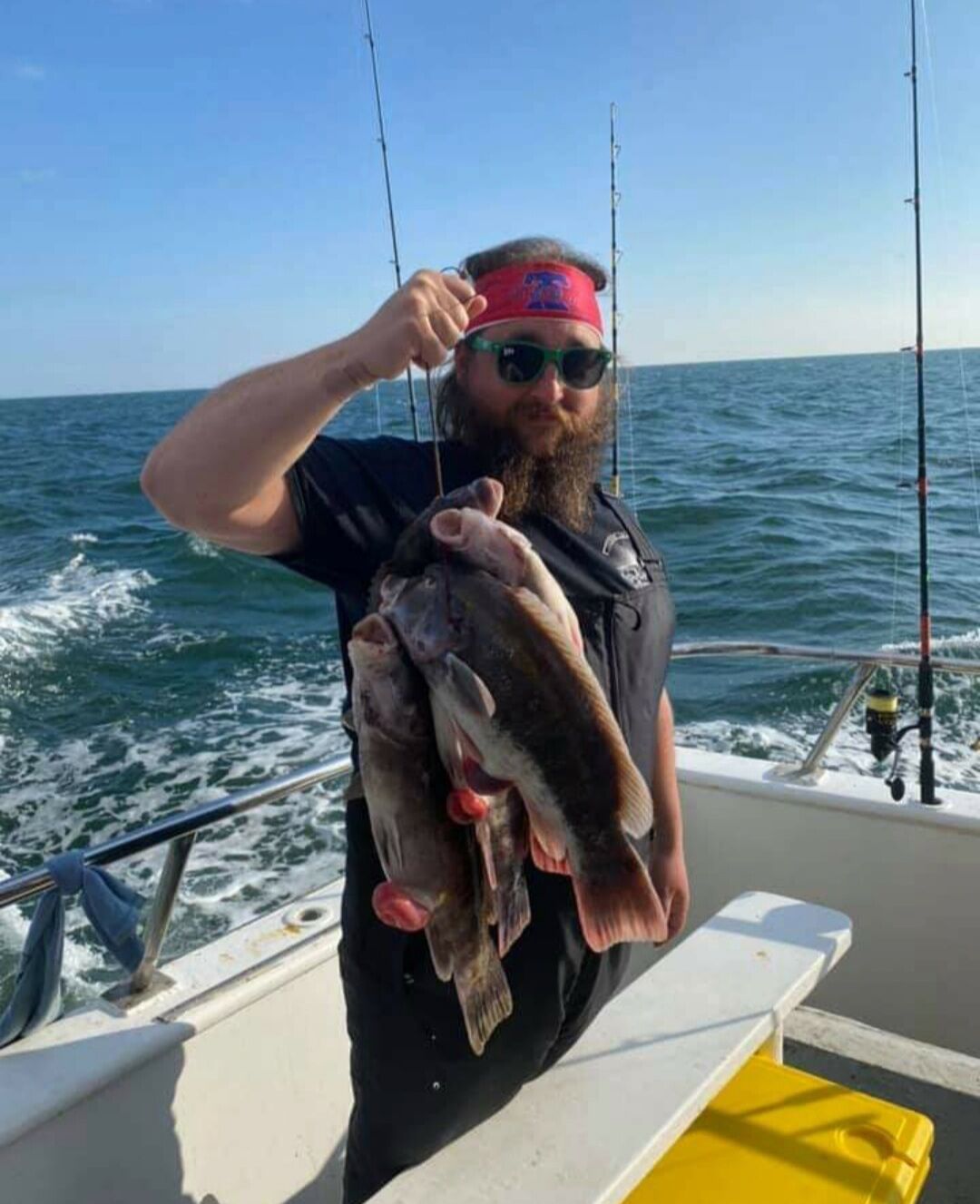 A happy angler and his blackfish stringer. 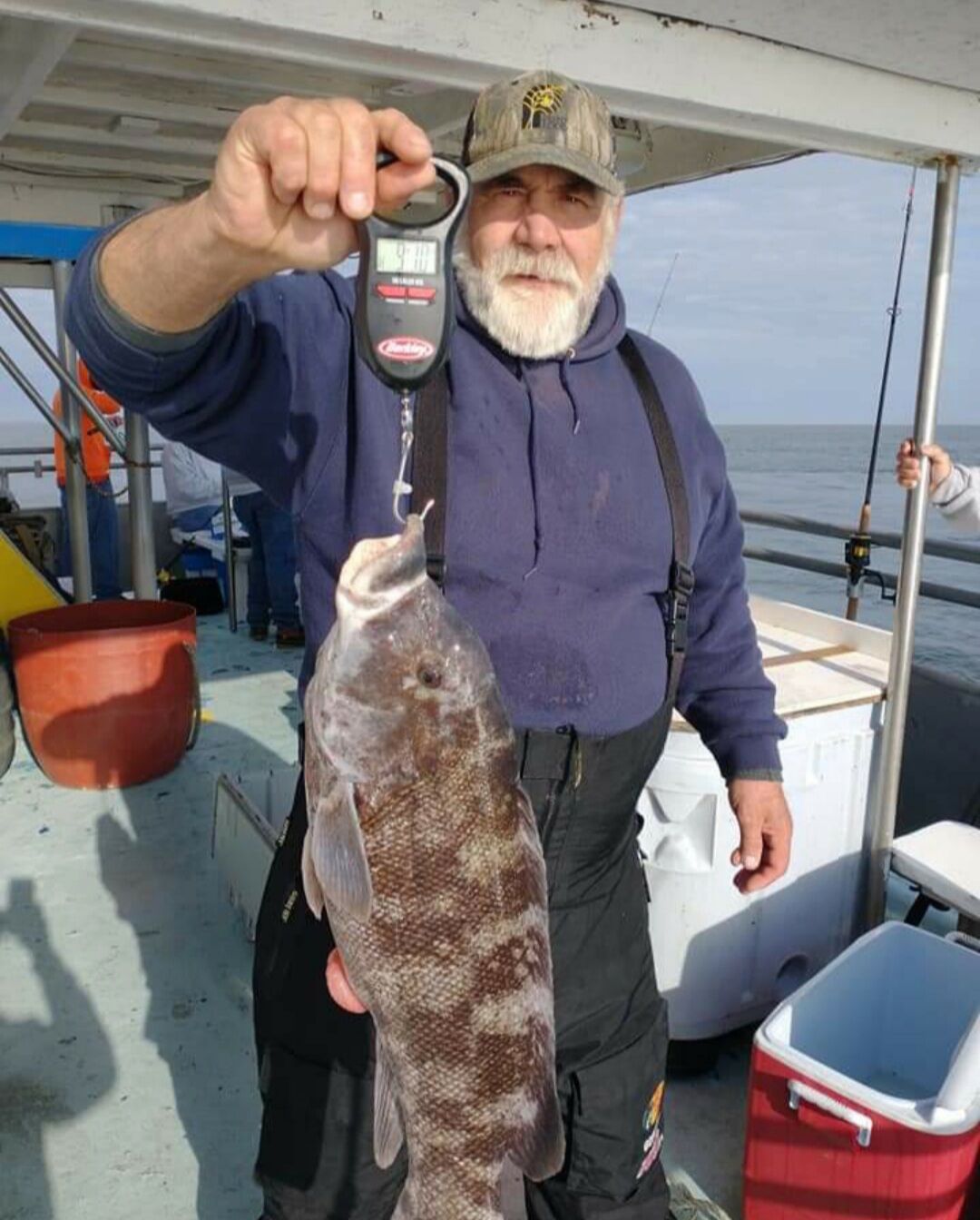 Paul Tomaski and his 9.1-pound blackfish.

What a great Thanksgiving weekend we had - great weather, food, and, of course, fishing.

Blackfish ruled the local scene, but sea bass, striped bass and triggerfish also had some representation. Black Friday provided the best fishing day of the fall so far, and the following days of the long weekend were almost as great.

A share of 7-plus-pound blackfish were caught, an 11-pounder hit the scales, and a 12-pounder also appeared. The 11-pounder took the daily pool from an angler who landed a 9-pounder on a local head boat.

The Sea Star III, with Capt. Chuck, reported “a beautiful weekend,” with plenty of blackfish action. Their trips bore a mix of keepers and throwbacks that included some five-fish limits. They also had “several” fish in the 7-to-8-pound range. Their mixed bag also included some sea bass and triggerfish.

The pool-winners from the weekend, all with blackfish, were Bill Deaver (3.0 pounds), Tom Collins (4.1), and Scott Small, who landed an 8.35-pound fish.

The Porgy IV's great weekend included many blackfish. Multiple limits were caught, including one by Tony Guerrero, which included an 8.5-pound fish. Another limit went to Mr. Young, who was the pool winner that day, with an 8-pounder.

The Miss Chris, with Capt. John, reported “decent” blackfish action, along with some sea bass around the inshore wrecks. They are sailing eight-hour trips, which can be booked online or by calling (609) 849-9453.

The Miss Avalon had a bustling Thanksgiving weekend. Many nice blackfish were caught, and they were joined by nice sea bass.

Many 4-to-5-pound blackfish were caught, with one of the bigger fish being Rhett’s 5.7-pound pool winner. This fish was caught on a tog jig.

Many limits were caught during the weekend, as John and Zachary limited out early on the Black Friday trip that proved to be an efficacious outing for many anglers. That trip also featured a whale sighting. As someone who has seen several whales off the coast in recent years, I’m sure I speak for the anglers who saw it by saying it is always a thrill to watch a breaching whale chasing the bunker off our coast.

Bayhound Charters had some nice results from their charters during the weekend. Many quality fish were caught, which translated to many happy anglers.

First Fish Adventures focused their time on the striped bass fishery. They were able to tie into some nice striped bass following the schools of bunker off the coast. Call Capt. Zig, at (609) 602-9004, to schedule a trip if striped bass are your passion.

One catch to highlight occurred when three stripers were caught at once on an umbrella rig. With three fish fighting simultaneously, the anglers may have thought they caught one large creature.

The Starfish was busy like the other boats over the long weekend. Their patrons landed some big blackfish, particularly on Black Friday, including an 11-pound pool winner for an unidentified angler. That fish beat out the 9.1-pounder caught by friend Paul Tomaski earlier in the trip.

Nov. 28 and 29 also provided great catches for the anglers on those days. More quality fish in the 4-to-6-pound range cleared the rail and kept everyone happy.

Avalon Hodge Podge reported a great day at a local reef for Joey and crew. Their biggest blackfish was 24 inches and 10 pounds. Nice fish, guys.

Sea Isle Bait and Tackle reported Capt. Joe Hughes sent in word that many immense striped bass were around. Those caught were released unharmed for another day.

An angler named Charlie stopped in over the weekend to report catches of 9 and 7-pound blackfish. He also had fish that weighed over five pounds.

Tight Lines B&T North reported nice striped bass catches. Most were returned to the water, but one in the legal slot was a 37-inch fish caught by Todd Eachus. Two nice blackfish were caught by Teddy Gill, and a large 12.2-pound blackfish was caught by A.J. Bolger.

The Cape May Lady had some nice blackfish, with one large fish (no weight listed) and others up to 7 pounds. In addition to those, they caught some sea bass and triggerfish.

A wish for a restful winter goes to Cameron, from Boulevard Bait and Tackle. The shop is now closed for the season. Thanks for the season-long reports and pictures.

Gift cards for the holidays are available by leaving a message on Facebook or an email, at blvdbait@gmail.com.

A belated thank you also goes to Grassy Sound Marina, Jim and Debbie Mooers. Thanks for the reports and pictures provided throughout the various fishing seasons at the Jersey Cape.

We had an epic fishing period during the long Thanksgiving weekend. Plenty of nice blackfish, striped bass, sea bass and tasty triggerfish created an unforgettable stretch of fishing.

If you can, get out and take advantage of the great, current fishing scene. Don’t miss this opportunity.

Good luck and I’ll see you around.