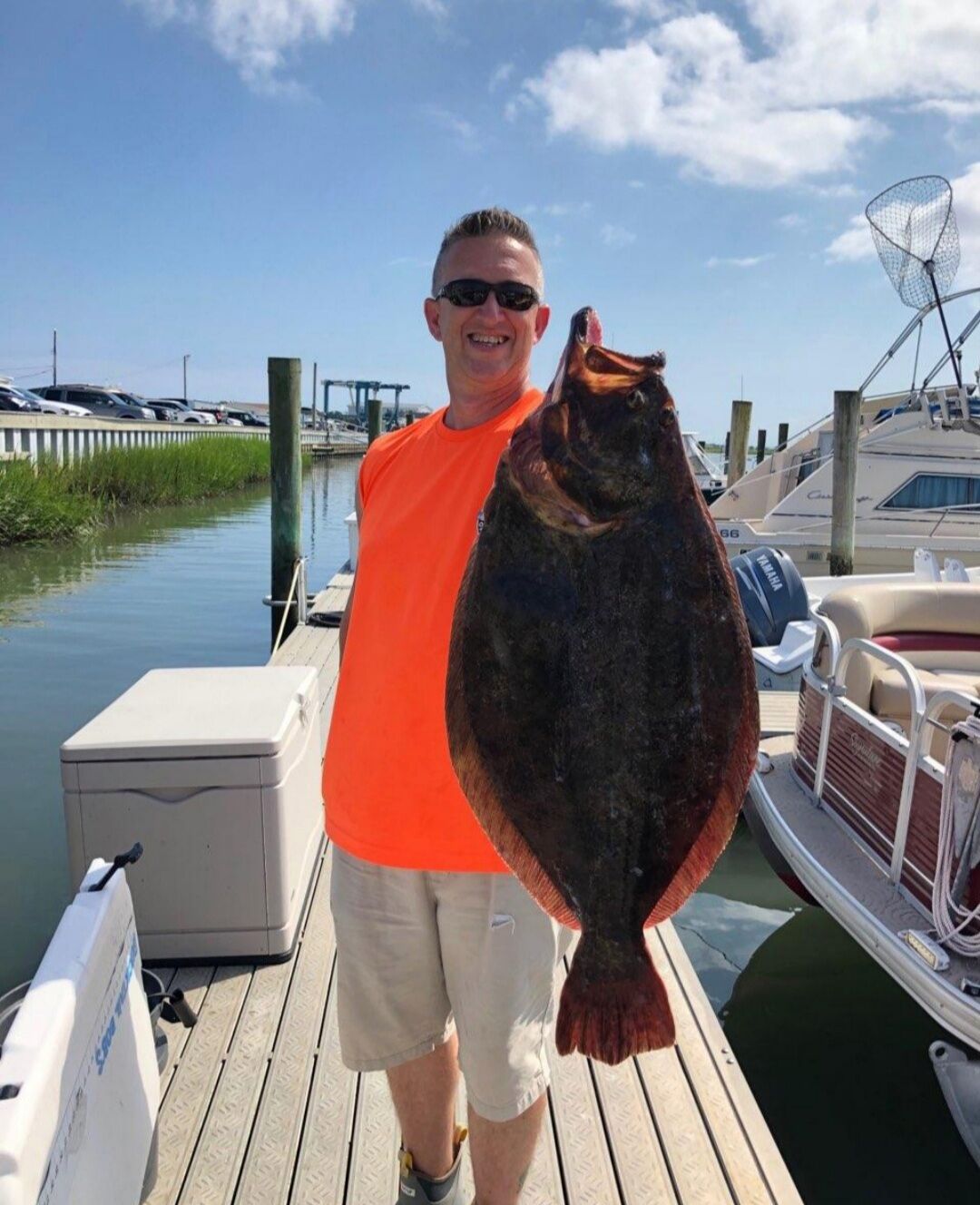 Mike Campbell and his big flounder. 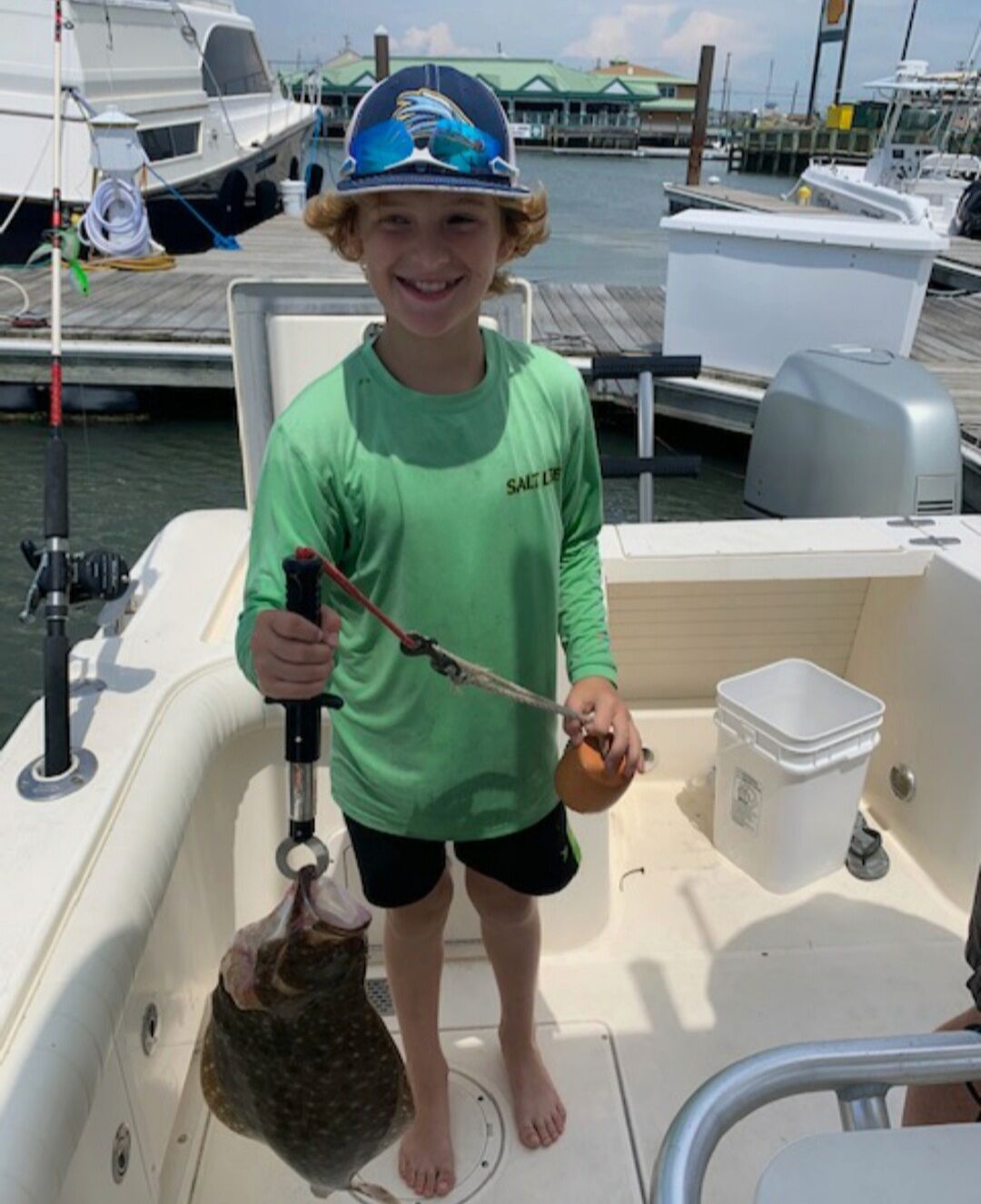 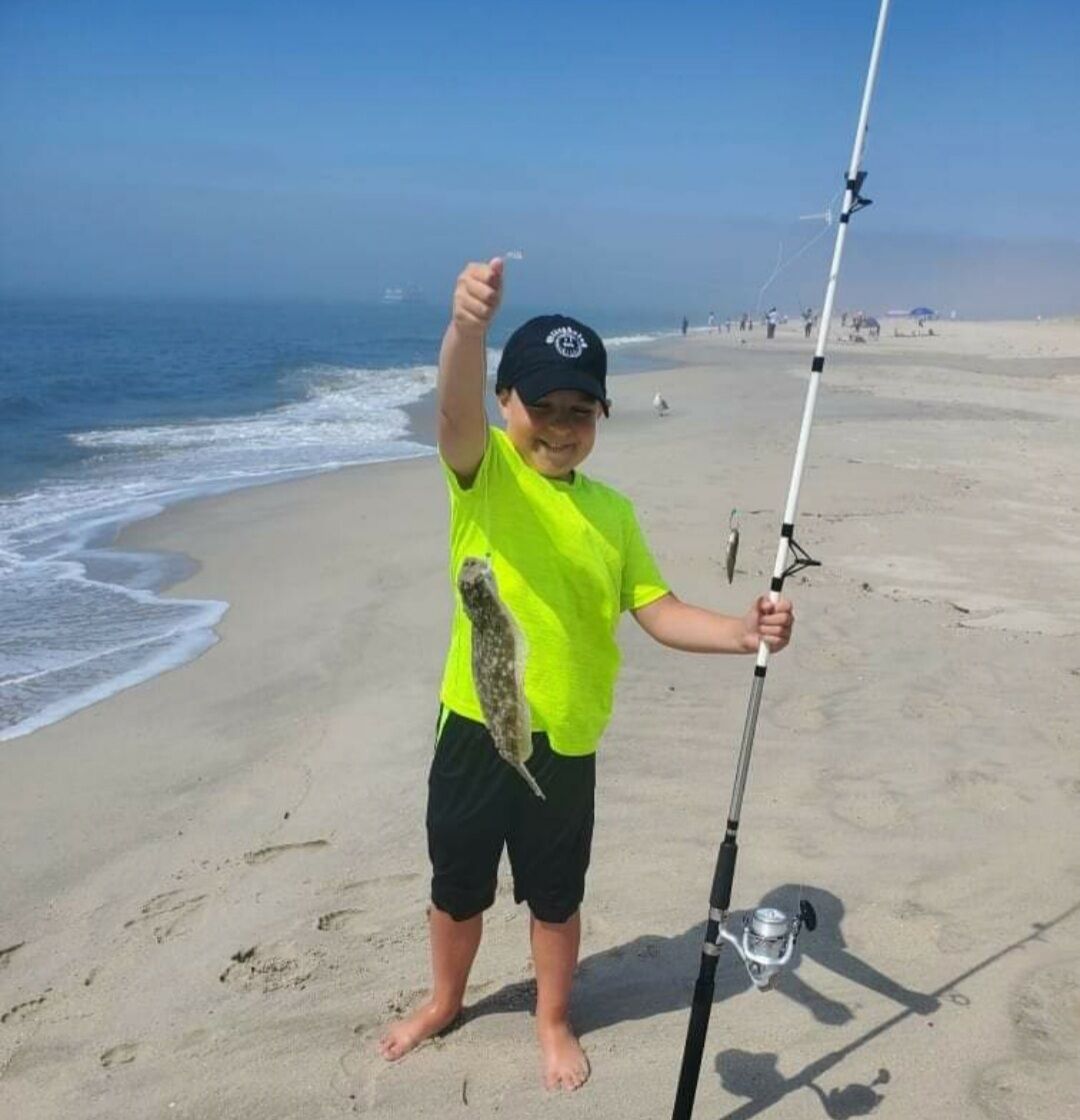 Christian P. and his first flounder. 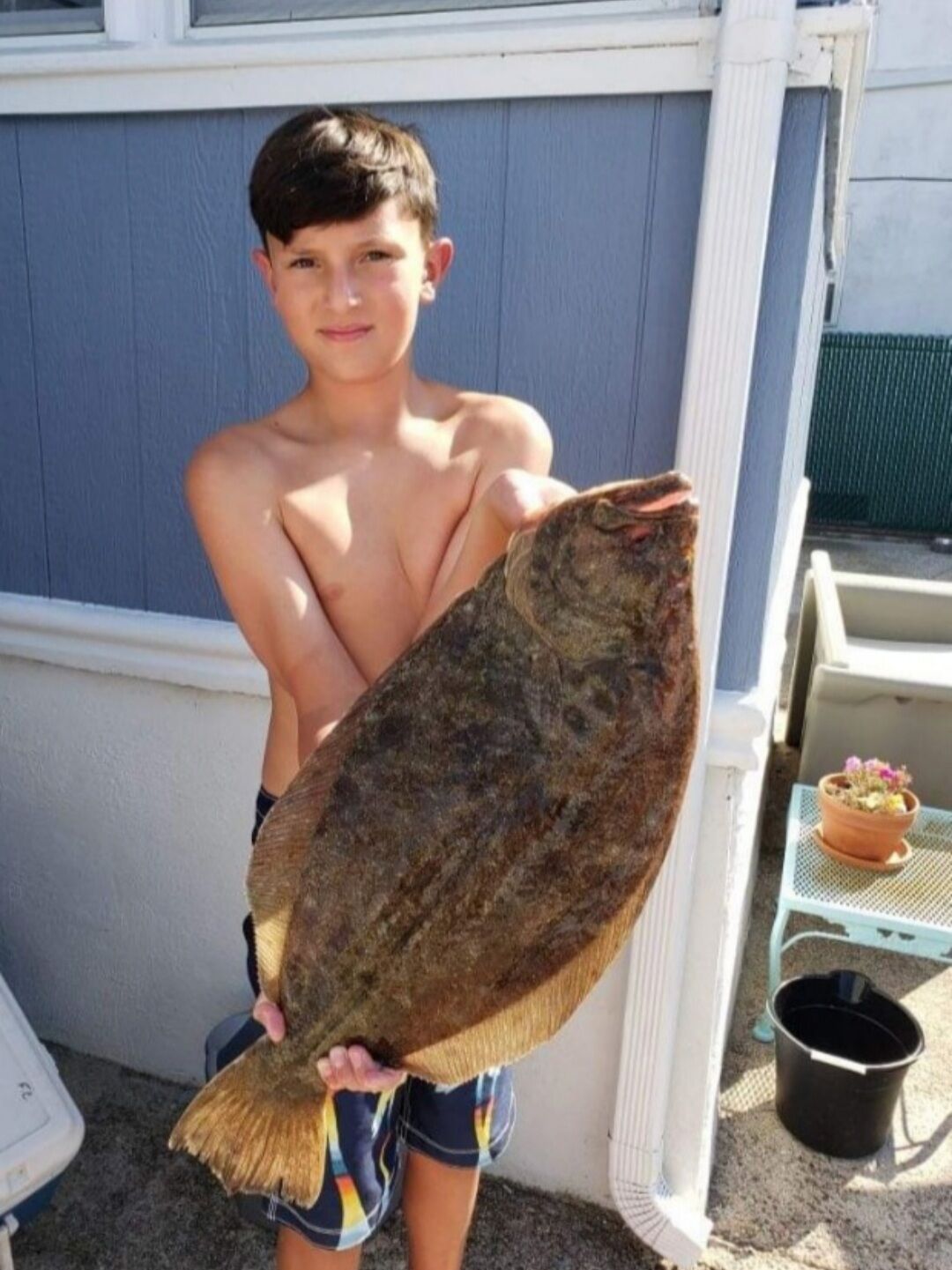 Phillip Ligambi and his 24-inch flounder.

It would seem that the rebound of productive fishing following the tropical storm's passing is well underway. Let’s hope the initial trends continue.

Fish, both in quality and numbers, were caught as soon as the waters had a few days to recover. Let’s check the action out.

The Sailor’s Delight is showing that nice fish are still to be had from the back waters they sail. They’ve had a nice mix of short and keeper flounder, plus some sea bass and kingfish.

A recent charter for Brittney’s bachelorette party had a fun, active morning trip. They were all catching nice-looking fluke. This is just another example of an option for a fishing trip and a fun excuse to get friends together.

Linda Dressic, known as "Mama Dukes," landed a 19-inch keeper on another trip, but Marian landed an even larger fish to claim that pool. One trip, in addition to flounder, produced a stargazer. They are caught here occasionally, so it’s an interesting catch to note.

The Cape May Lady, in addition to its regular trips, is running special blackfish/flounder combination trips. I understand that a previous trip was excellent with the blackfish portion. Throw in some fluke and you have a great day.

Grassy Sound Marina had some nice action to report with the pier being an area of interest. Particular catches to note went to Carmen DiGeronimo, who landed a nice striped bass, Rita and Jennifer, who caught and released an outstanding sheepshead, and Harry and Jim, who whooped up on the fluke. They each had keepers on a day when close to a dozen were caught from the pier amongst all the anglers.

The Miss Avalon is finding that life is returning to the local reefs. Recent trips have provided keeper flounder, triggerfish, bluefish, sea bass and kingfish. Fish are being caught on both the morning and afternoon trips, so it seems they are hungry on both daily outings.

The Avalon Lady has been catching sea bass, spot and some keeper flounder. You can also throw in some sharks and sea robins for some extra fun.

Capt. Brandon reports that crabbing is also “starting to pick up,” which adds another element to the mix. Crabbing trips take place on Tuesdays and Thursdays, from 1-4 p.m.

The Starfish has been doing well recently on its twice-daily trips. Keeper sea bass were caught, but the main quarry of late has been triggerfish. They have been catching some nice-sized fish, which means the anglers are departing content when their trip ends.

First Fish Adventures of Sea Isle has been staying busy. Their charters have been catching plenty of bluefish and Spanish mackerel. One outing produced two nice king mackerel for John Grabowski and his son, Conner. Another trip had a friendly competition between David Guarnaccia and Patrick McGiney, who both finished with five bluefish and a couple of Spanish mackerel.

Boulevard Bait and Tackle reported two good days at the local reefs for the tandem of Mikey B. and Joey G. Both trips ended with five keepers, with the first day's top fish weighing 5.1 pounds, while the biggest on day two weighed 6.2 pounds.

Sea Isle Bait and Tackle mentioned that an angler, Vince, stopped in to weigh his nice catch. He brought in a nice blackfish that was 23.5 inches long and weighed 6.65 pounds. That’s great news for those of us who like to target these fish.

The Porgy IV got back into the swing with some recent solid catches. Haig Panossian won a pool, with a 6.5-pound fish, one of two that day. On that same day, Michael Kurtz caught one fish, a 6.45-pounder, which, on any other day, would have won the pool. Other pools went to Andy Siganuk, Joe Gomez and Chick Collington. Three-fish limits were also recorded by multiple anglers.

The Sea Star III had a nice post-storm report for the fishing logs. Quality flounder played heavily into the action after the storm. Leading the way was the 8.10-pound pool winner caught by Kevin Nelson. It represents his personal-best fluke and is the largest I have heard about from our area.

Some three-fish limits were also recorded on the trips following the storm. Other pool winners were Jason Thomas (3.80 pounds), Jack Sellers (3.95) and Frank Servocky (4.4).

The Miss Chris reported “another fine week of fishing," excluding Aug. 11. The Cape May Channel produced croakers, kingfish, bluefish, weakfish and a few spots. The trips to the reefs were highlighted by a 5-pound, pool-winning fluke for Rich Hogan, who won during the morning outing, while his wife, Nan, claimed the pool during that day's afternoon trip. She won with a 15-inch kingfish.

The Cape Queen had the Grandmaison family out recently for a catch-and-release shark trip. They headed to the Delaware Bay, where they had a great day by catching nine sharks. They were brought to the side of the boat, then released for another day.

Diane, from Cape May Bait and Tackle, sent word about a young angler, Christian, who was fishing from the local beachfront when he landed his first fluke. He was using minnows as bait. Congratulations, Christian, on your special catch.

Thanks to our readers for submitting reports this week. Pat Stocker yielded a report that grandson Nathan Stocker, 10, caught a 22-inch flounder while fishing with his grandfather, Capt. Tom, on the Parrot Dise, the family boat.

Vanessa Campbell reported that Mike Campbell caught a 27.25-inch, 7.54-pound flounder while fishing at the Old Grounds. He was fishing with Scott Wheeler aboard the Big Bone.

Frank Costobile Jr. sent in a report that young angler Phillip Ligambi caught a 24-inch flounder while fishing at the Wildwood Reef. Thanks, again, to all for submitting. Keep those reports coming.

Don’t forget to grab a copy of Do The Shore. It has the fishing column, more pictures, and other news features about the local area.

Fishing seems to have bounced back quickly after the storm, which is great. Good luck if you get out.